From Melbourne-based solo dev Rese aka Rubén Garcia, comes Ganbare! Super Strikers. To crib from his own press release, GSS is borne of his love of tactical RPGs and Japanese sports-based manga like Captain Tsubasa. No, we’ve not heard of it either.

Oddly, this is the second turn-based football game to be reviewed by Playstation Country in a matter of months. The last, Football, Tactics and Glory, got a 6 from our esteemed editor Richie. Unfortunately, GSS is another disappointing Ratalaika release, despite the potential.

This is one game you probably need to complete the tutorial on. Though in our case, we’d largely figured out the mechanics of GSS by playing a quick match. The meat on the bones is via a story mode of sorts. The manga theme follows through with every character being styled that way. You create a character, in our case a forward named for the drummer from Guitar Vader (look it up). We recommend going with a name you’ll remember as the inbuilt names are just ciphers that prove instantly forgettable otherwise. 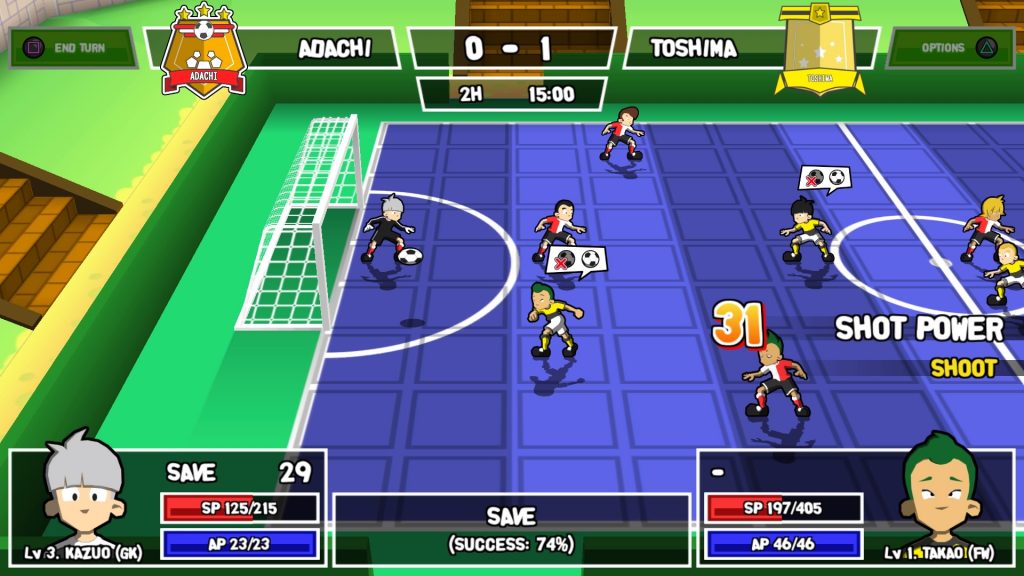 There soon follows a series of themed games against a variety of teams. The first is straightforward enough and you should win without much trouble. Every action is dictated by virtual dice rolls you see. That’s not so bad as you’ll miss a shot here or fluff a pass there. Not every team is LiVARpool after all.

It all starts to go a bit wrong when you end up facing the second team. The bandana-clad douche that heads the team has a super shot you see. He challenges you to not let him get the ball, but the minute he does you’re almost guaranteed to concede a goal. It’s annoying the first time. But the fifth or sixth time, one match after another? It’s enough for you to switch off your PS4/Vita and call it a day.

The only upside to losing matches is your characters still level up, gaining action points as they do so. In getting past the second match, we effectively power-levelled our starters due to the sheer number of times we ended up playing over and over. 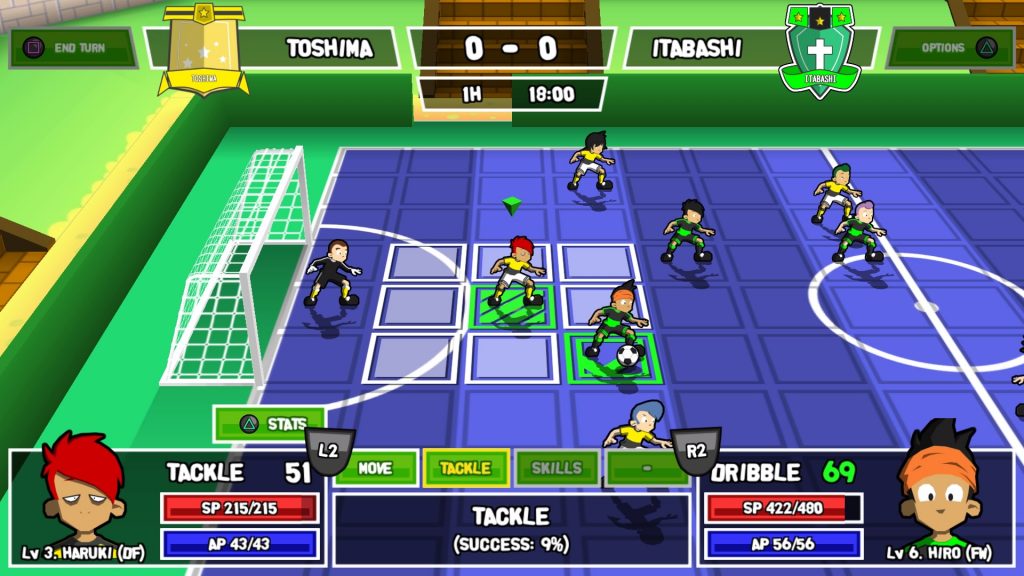 Combined with the baffling decision that you can only tackle once in a while, you can be surrounding the opposition, but not be able to actually tackle them. There’s the very real possibility of having a defender that can’t tackle at the start of the game. Get your head around that nugget. On top of that, Multiball Bandana Prick has a super dribble with a massively high rating. This makes him effectively impossible to tackle. Yeah, nice one.

In the event you finally beat the second team, things get even worse against the third team. You’re playing in a rain shower and ball movement is massively affected. Practically this means you can miss a shot on goal at absurdly close range and still miss due to the modifier pulling down the shot rating. This, in conjunction, with not being able to tackle means you’ll lose narrowly far too often. 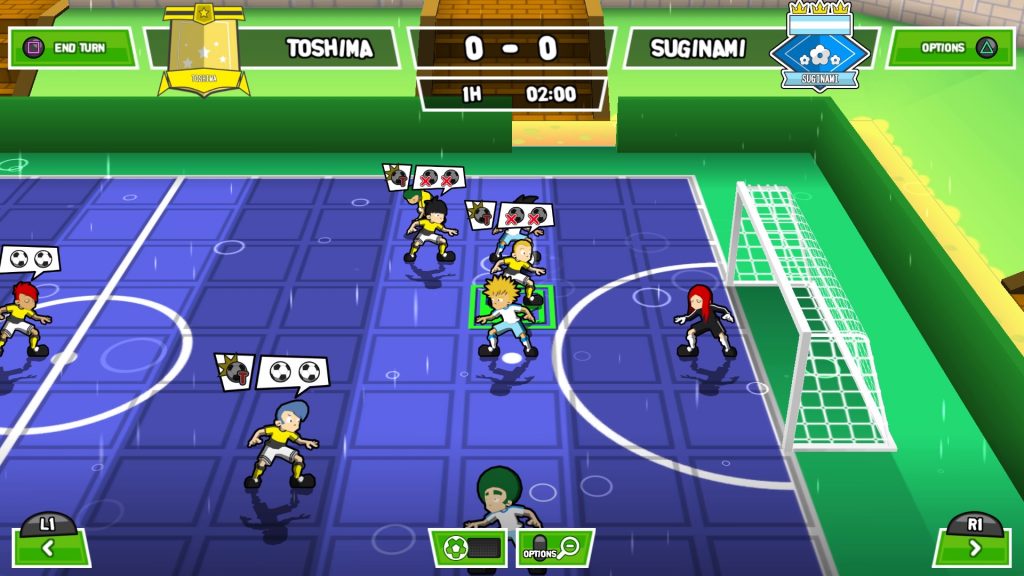 You’ll unlock items, and hence special moves, by meeting objectives in matches. Typically, they’re as prosaic as ‘win a match’ or ‘don’t concede any goals’. Easier said than done. The tutorial is lacking in terms of actually getting you to equip the items. You’re left to your own devices, only discovering how to learn new skills when you venture into the menus yourself. Only then can you learn new skills that the AI deploys against you from the outset.

In the AI’s arsenal there are such gems as a sleep tackle, a poison tackle and a silent tackle. These function in the same way as they do in a turn-based RPG. Sleep incapacitates your player, poison depletes your action points and silence stops you using any special abilities. You’ll often feel hard done by as they unleash special move after special move, especially as in most cases you won’t have the equivalent in your skillset to counter with. 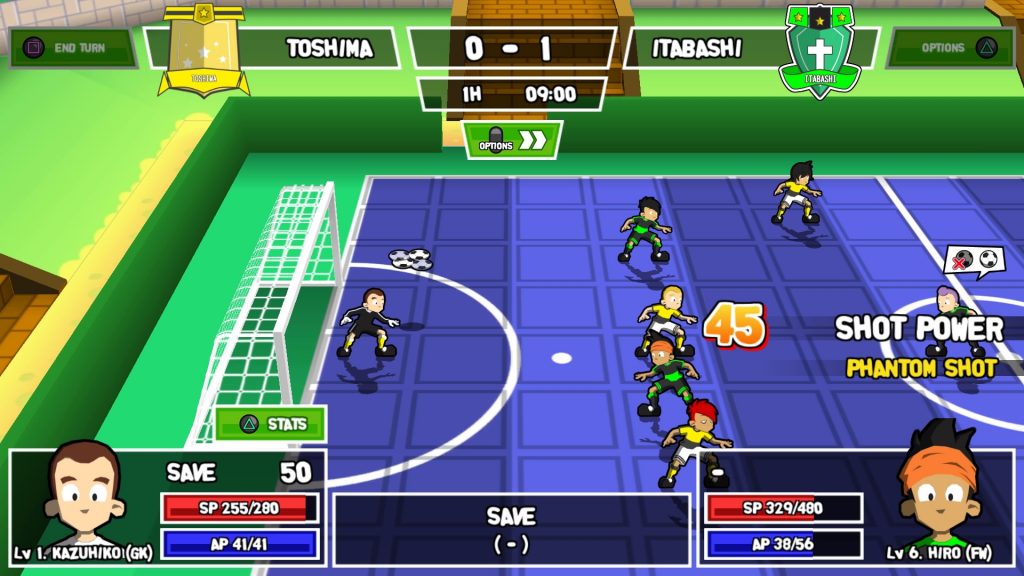 About the only bright point regards the special abilities is the fact you can learn them by equipping particular items. Once they’re learned, they stay learned.

All of this adds to the feeling that Ganbare! Super Strikers is somewhat half-baked and quite dull really. There’s little in the way of fun here. In typical Ratalaika fashion, there’s also a Vita version included but its spectacularly unoptimised on Sony’s forgotten platform. Juddery slowdown, extended load times (if at all) and bafflingly, a download three times bigger than that on PS4.

Ganbare! Super Strikers could be fun. But due to massive balancing issues, mainly due to not being able to tackle(!) we can’t recommend it.

Ganbare! Super Strikers
3 Overall
Pros
+ Cheap
+ Only takes up 100Mb of HD space
+ Includes the Vita version as per usual

Cons
- Quite boring really
- Inadequate tutorial, especially with regards equipping items
- You often can’t tackle the opposition. Yes, really.
- Vita version is sub-optimal to point of almost being unplayable
Summary
Ganbare! Super Strikers is a tactics-based football game a little bit like Football, Tactics and Glory. Just not as good. We suggest you play that instead.