Now that we’re conservatively half a century into videogaming, there aren’t too many original ideas left when it comes to core gameplay mechanics and so the easier option is to try to combine two disparate ones into something relatively new.  In the indie gaming world, this usually means trying to crowbar roguelike mechanics into a game but Puny Human have managed to really surprise us with Galacide.  After all, combining the classic 2D shoot ’em up with the match-three puzzle game is certainly unique.

It’s hard to tell which part of that equation gets the biggest billing.  On the face of it, the game looks like a straightforward horizontally scrolling shoot ’em up in the classic style of R-Type, Nemesis and Darius.  You fly ever onwards going to the right and enemies drift in from the right hand side of the screen and either try to shoot you or crash into you.  Of course, you can shoot at them and blow them up pretty easily because everything dies pretty easily apart from the almost-mandatory bosses that do take a bit more damage before imploding. 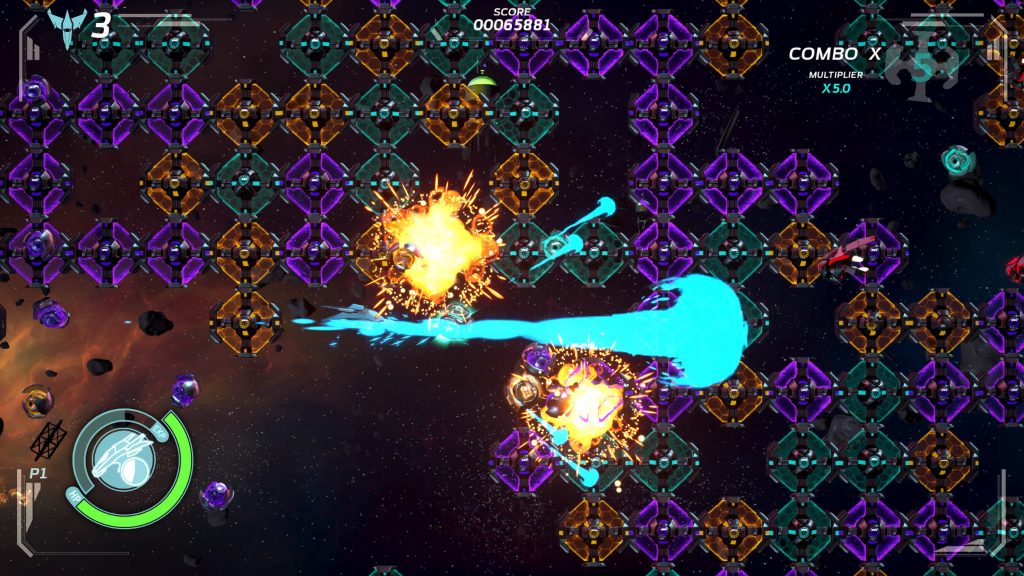 So far, so standard.  But Galacide‘s puzzle mechanics are what makes the game what it is.  As you scroll through the play area, coloured gem-like blocks called ‘bits’ block the way ahead.  These come in three colours (orange, blue and purple) and you clear them by matching four of them.  To do this you shoot coloured orbs at them and these are dropped by enemies that you destroy.  There is a little subtlety here as you cannot pick these up when you are firing and firing also shoots them, so you need to be careful.

Essentially this becomes a balance between putting out damage to clear out enemies and concentrating on clearing those bits.  It works well though and Galacide handles the mix of genres well enough to not compromise either of them too badly.  Sure, this isn’t the best match-three (well, four) game ever and it’s not the best shoot ’em up ever but both aspects are handled really well.  Indeed the game does offer a separate puzzle mode which is good but given how solid the shoot ’em up aspects are, we’d like to have seen some dedicated shoot ’em levels or modes here. 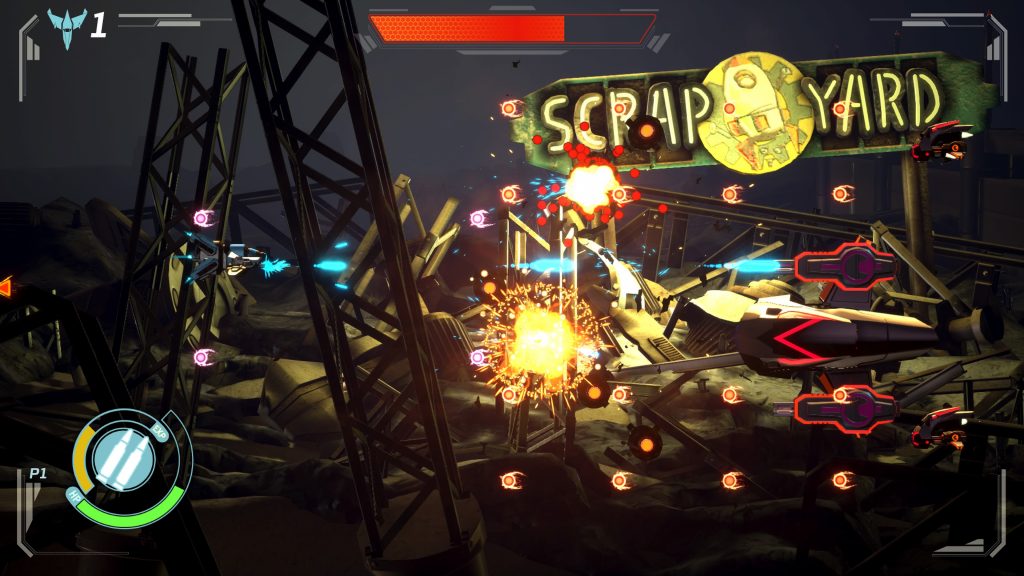 The main campaign mode offers just six stages (and a tutorial) and these are pretty brief, clocking in at just a few minutes each.  We do prefer our shoot ’em ups to be too short rather than too long but Galacide definitely could have used a couple more levels just to pad things out and while we’re having a quick nag, the stages are all very similar.  Eventually the backdrops are lost behind the ‘bits’ but they could have at least changed up the design of the bits in a Lumines kind of way.

There is, however, an ‘Endless’ mode which has some tricky trophies attached to it.  That’ll keep you going for a while (as will the handful of unlockable ships to try out) but in terms of core gameplay, there’s not a ton of content here and certainly not much variation but what’s here is good.  This might be the first game that really counts as being a ‘thinking fan’s shoot ’em up.’ 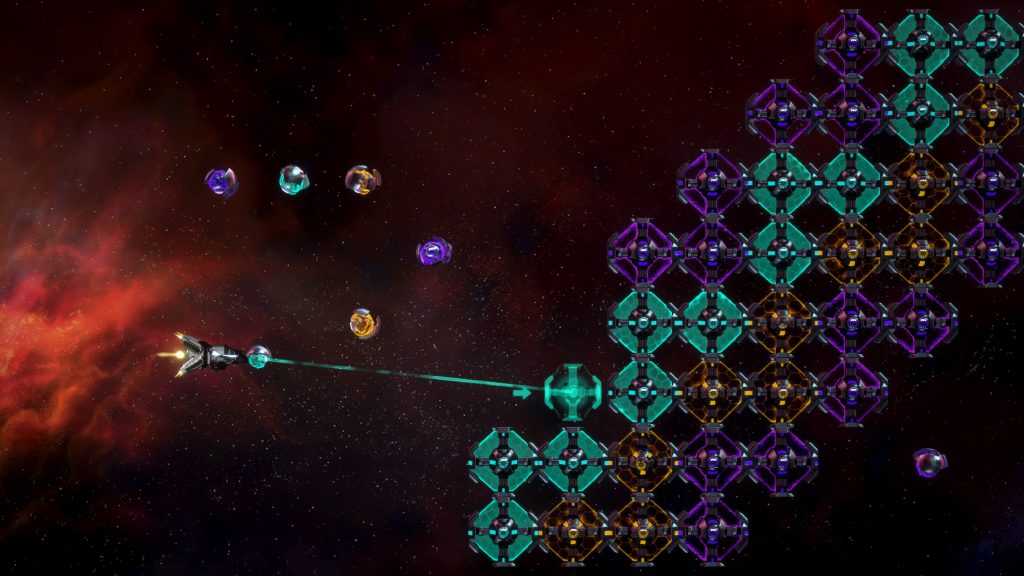 Visually speaking, Galacide looks very nice.  The game uses a bit of a flat Flash-style art style (with a bit of parallax scrolling for depth) which is fairly simple but combined with the ‘bits’ it all comes together well.  There’s a lot going on but you can generally always find your way through it.  The sound is as you’d expect with plenty of effects but through my sound bar the depth on the explosions is very powerful.  The voice acting for the story beats helps elevate the game too.

Galacide‘s little experiment of mixing shoot ’em up action and puzzle game mechanics definitely works and while it’s a little short-lived, we really liked playing through it.  If they could shine a spotlight on the shoot ’em up aspects occasionally and give it a bit more variation and content, then this could be a real cult classic.  So while Galacide will eventually fade from our memory, we’d queue up for a week for a sequel.

Galacide
8 Overall
Pros
+ The shooting and puzzling are both well implemented
+ Good presentation
+ Has a unique feel to it
Cons
- Quite short
- Lacks variation both in gameplay and presentation
Summary
Galacide's mix of shoot 'em up and puzzle mechanics works very well. The only problem is that it's just a bit short on content.