While there are a lot of games that use twin-stick shooting mechanics on PSN, there aren’t that many pure shoot ’em ups in this sub-genre.  By that I mean ones that don’t have rogue-lite/like mechanics attached or are sprawling dungeon crawlers.  The best two so far have been Geometry Wars 3, which gets a bit of flak from people who think it isn’t as good as its prequels (they are wrong, it’s amazing) or Super Stardust Ultra and #Funtime is firmly in that camp where it’s all about the shooting.

It comes from solo developer OneGuyGames and for a solo effort, there’s quite a bit of game in here.  Clearly the inspiration is Geometry Wars 3 and, like that game, it’s a top-down shooter (albeit from more of a forced perspective) with a bunch of variations to the core arena shooter gameplay.

You’ve got two main ways to play.  Campaign offers you fifty short stages which encompass each of the variations the game has to offer.  These are generally timed affairs and all come with a three-star rating system much like Geometry Wars 3 had and this does help encourage some replayability.  Arcade, offers you a choice of five basic modes where you play until you lose all your lives. 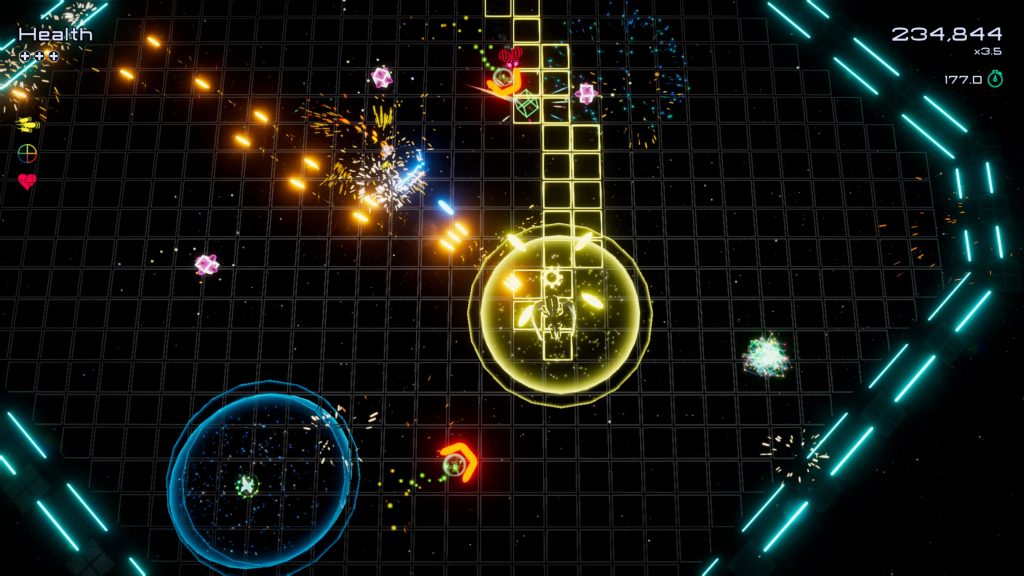 The core gameplay is, as you’d expect, controlled in a standard twin-stick fashion.  Thankfully, the game opts to shoot as you aim (we’ve said it before but twin-stick shooters are always better without a fire button) and initially it’s all very intuitive, slick and playable.  However, #Funtime does offer up more than you’d initially imagine with an interesting colour switching mechanic.

Each Dualshock face button is linked to a colour and pressing them will switch your ship to red, blue, green and yellow.  Only yellow is a problem here as the other three match the symbol on the button so

is green but yellow is on the

button which is magenta.  This is probably down to the game being designed for an Xbox controller or just the fact that magenta might be confusing.

Changing colour lets you pass through obstacles of the same colour such as lasers and enter safe zones and this comes into play in certain campaign stages such as the ones that require you to navigate out of a maze which is full of traps.  You also get a drone that follows you around in a lot of stages and this has different bullet types depending on your colour.  Also, destroying an enemy when you are the same colour as it will net you more points, which can be the difference in those campaign stages. 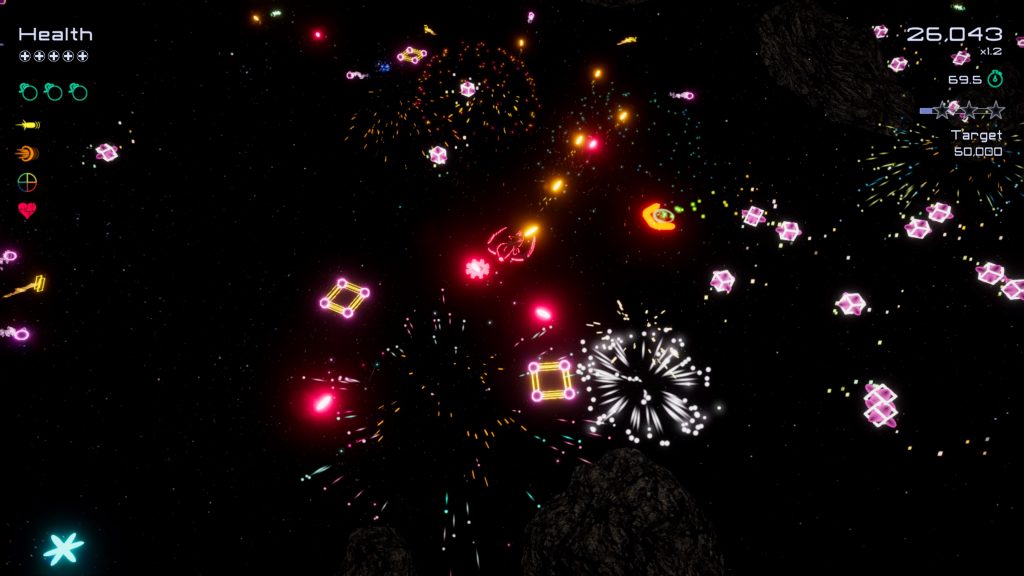 It all adds a degree of strategy and complexity which is interesting but not always intuitive, although that might be more down to me as I’m still having to remember what button is assigned to each colour.  Oddly I never had that problem back in the PS1 days with games like Parappa The Rapper and Bishi Bashi Special but I’m still not able to get in the zone with #Funtime‘s colours yet and being in the zone is what this genre is all about.  This may also be because you really don’t want to have to take your thumb off of that right stick.

Whatever mode you’re playing, the action is fast, slick and fairly smooth.  Framerates seem to be a little compromised sometimes (it’s hard to specify but occasionally the action seems a little less smooth although this is marginal).  The forced perspective doesn’t affect the gameplay too much but there is a lot going on on-screen and occasionally deaths can seemingly come from nowhere.

This is due in part to the number of enemies but also the combination of colours on the backdrop (once you’ve picked a colour you will leave a trail on the ground below you) and the fact that enemies materialise randomly anywhere on the play area (there’s a second or two of indication before it happens but it’s still another thing for your brain to process).  The enemies die in a small hail of fireworks too which can also get in the way a bit. 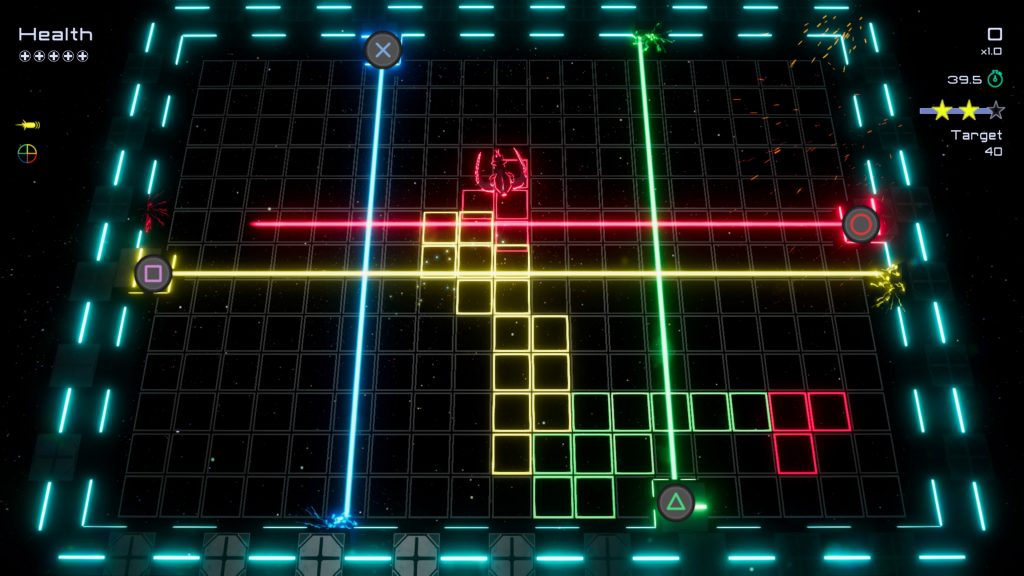 Also, there are some open levels where asteroids are hazard and these are so dark that we had to put the review telly into the disgusting ‘Dynamic’ mode to be able to see what is going on.  These levels are quite rare, but even so.  Indeed the whole game does benefit from being in that TV mode as it makes the colours pop, otherwise they are oddly muted.

Of course, any game like this must come with a (what the kids call) EDM soundtrack.  While that is all well-produced, we did find the music to be a little too much on the poppy, cheery side of things.  Usually a game like this would have something a bit harder-hitting and in the end we found ourselves turning the music down to focus more on audio cues from the sound effects.  That’s all pretty subjective though and your milage may vary but we’d have preferred something a bit more serious and less ‘Ministry of Sound.’

So, that name then.  This isn’t the first twin-sticker shooter with a silly hashtag name on PSN.  We previously reviewed #killallzombies (a review that I’m going to rewrite later today as some technical issues were ignored by the devs that only come to prominence when you get really good at the game) and that kind of did what it said on the tin.  You killed zombies. 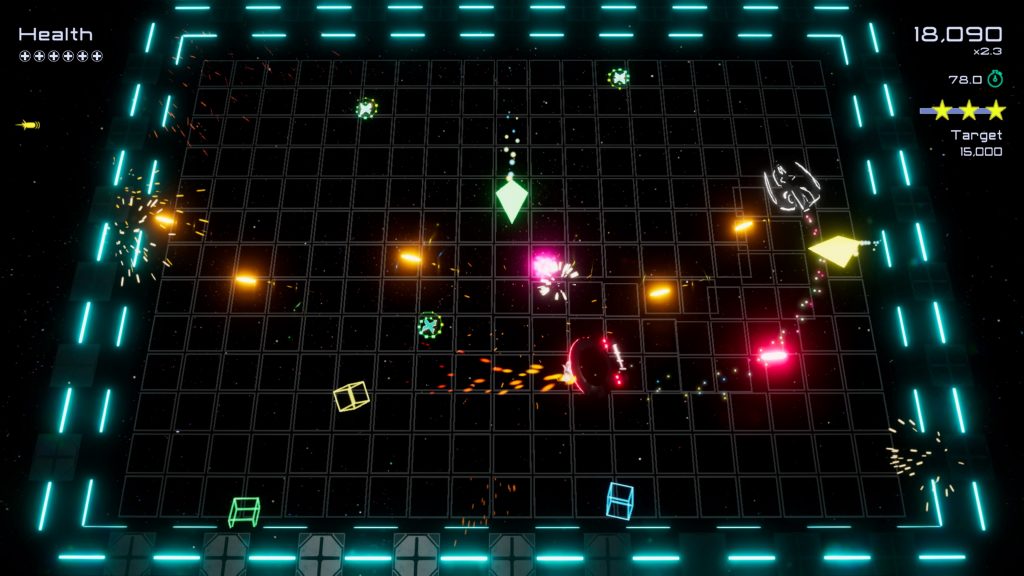 There is a subsection of the Arcade mode here called Funtime which attaches a wrecking ball to your ship.  It’s an interesting wrinkle to the game and you need to stay matched to its colour or else it’ll likely twat you out of existence too.  Again, it highlights some of the creativity on display here and is a nice distraction from the core modes of the game.

Overall then, there’s a lot about #Funtime that we like.  The core action feels good, the game looks decent (it’s not quite as pretty as Super Stardust Ultra or as well-designed as Geometry Wars 3 but it is much better than the other also-rans of this genre) and there is enough variation to keep you interested for a long time.

That said, the game never feels quite as perfectly tuned as Geometry Wars 3 and the game modes aren’t quite as good as that game’s King and Pacifism modes.  But it comes pretty damn close.  It most certainly does it all better than most of the other twin-stick shooters on the system and that’s definitely good enough for us.

#Funtime
8 Overall
Pros
+ Very slick and playable
+ Good amount of modes
+ Very addictive
+ Decent presentation
Cons
- Colour switching stuff is interesting but takes you out of the zone a little
- Visuals can get in the way of the action very occasionally
- Modes are good but not quite up there with the best of the genre
Summary
Considering the low price and the fact that this is a solo effort, #Funtime is a surprisingly polished and gameplay-packed experience. We've got minor niggles when we compare it to the best games of the genre but this is still a very good twin-stick shooter that is easy to recommend.