Another week, another game from Finnish publishers Ratalaika Games and fresh from porting across games from all sorts of genres in the last year, they’re now bringing us FullBlast, a vertically-scrolling shoot ’em up which first showed up on iOS and Android before making its console debut on the WiiU in 2014.

So, this doesn’t bode particularly well for a PS4 title in 2018 but, as is often the way with Ratalaika, the game actually looks reasonably good.  Most games in this shooty sub-genre tend to be 2D affairs but this is more of a 2.5D affair with flat enemies over surprisingly detailed 3D backgrounds that scroll up, and slightly into, the screen and occasionally stop and then rotate during sub-boss battles. 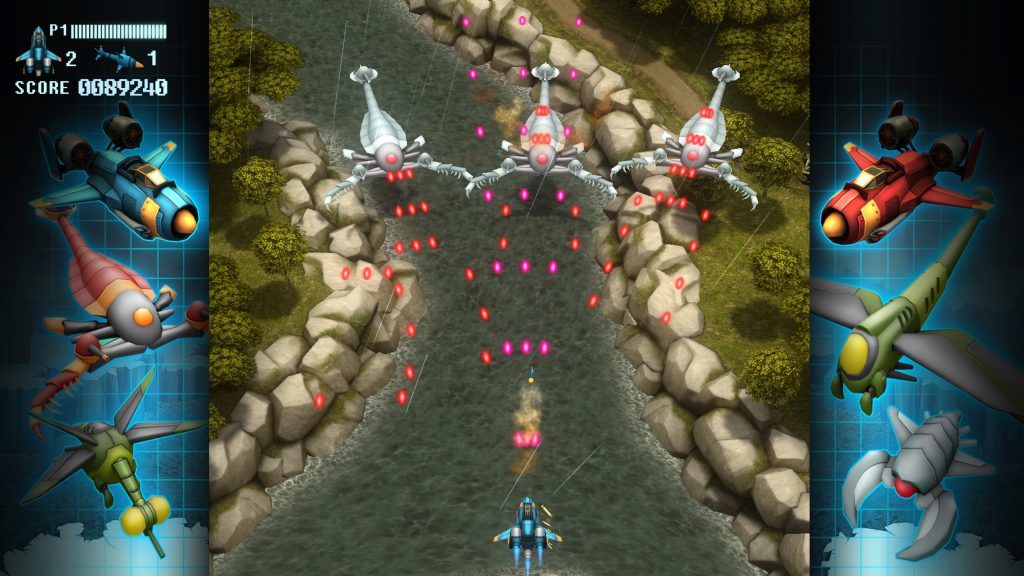 As is the way with this type of game you play as a ship that spends much of its time in the bottom third of the screen as enemies approach (mostly from) the top.  You move with the left stick or d-pad and shoot with

interchangeably.  Enemies drift in, shooting back at you which chips away at your health bar.  They can also collide with you which also causes damage.  Yes, it’s a shoot ’em up like we said.

The game is set across twelve stages, all of which offer the same gameplay with no real surprises.  Little enemies come along, usually dying before they can affect proceedings much while larger enemies and turrets offer a bit more resistance.  Each stage ends with a boss battle and these bosses then reappear later as mid-stage enemies or in pairs to create slightly tougher boss battles later on. 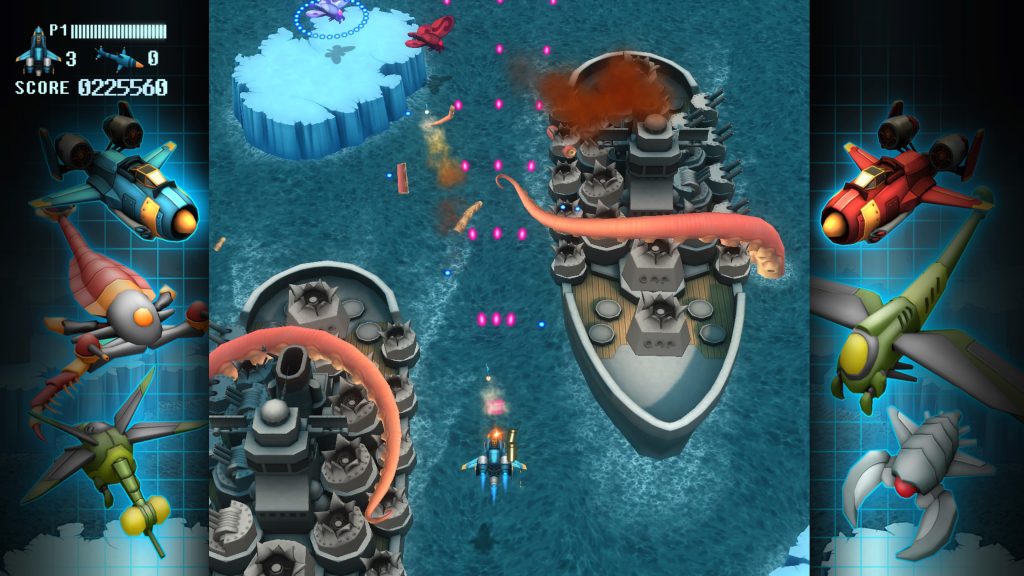 Power-ups show up along the way offering improved firepower, healing, extra lives and score bonuses as well as bombs which are triggered with

and act as your basic smartbombs.  What’s interesting is that you only start with one of these and they aren’t replaced when you die.  Also, the game doesn’t offer continues after you lose all of your lives which is definitely unusual for this type of game but you can restart from any stage you’ve unlocked.

However, this is a Ratalaika joint and that can only mean two things.  Firstly, it’s a cross-buy title and most importantly, it’s not going to offer much resistance when it comes to earning that platinum medal.  While the game offers twelve stages, you only have to beat four of them.  I was happily playing for a few minutes when I saw two trophies pop, the latter being ‘Platinum Ship’ and sure enough that was the platinum.  Even by Ratalaika standards this is ridiculous and clearly deliberate.  Why not allocate a trophy to beating the game?  The twelve stages are split into three environments (city, forest and ice) so they could have bookended each of those sections with a trophy.  Blowing your platinum a third of the way in just seems cynical. 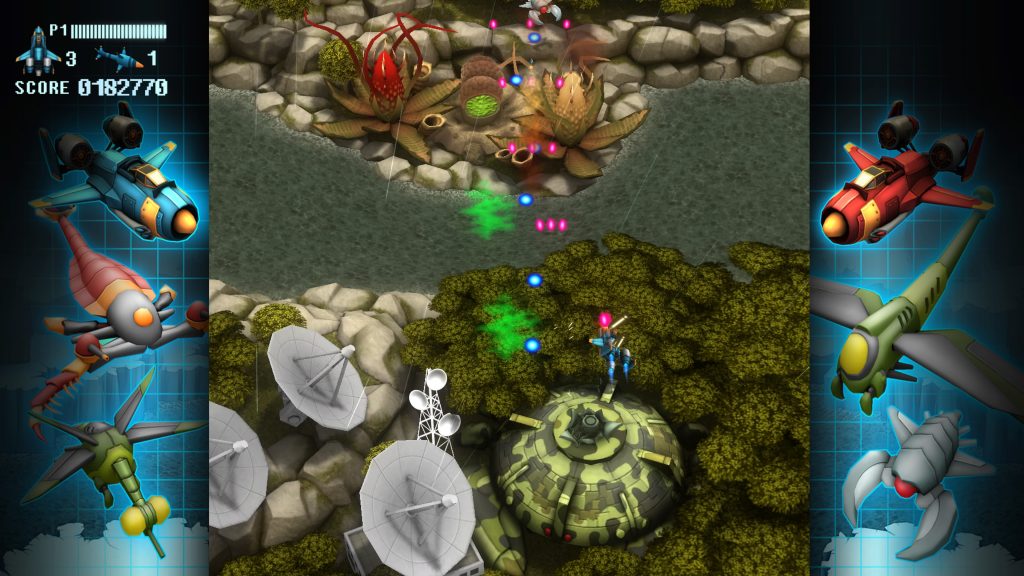 Not that it would have mattered.  After losing a life on the first boss, I then sailed through the entire game not losing another life until the final boss.  Being able to 1CC a shoot ’em up on your first attempt, and on the game’s Normal difficulty setting (there are Easy and Hard settings too) is a bit ridiculous.  Sure, I love shoot ’em ups but I’m not an expert so this will likely be everyone else’s experience of the game and that’s where the game loses the most points in this review.  It’s not just about the platinum this time, the whole game offers no real challenge

There’s not much else to say.  FullBlast is technically pretty decent but is let down by a critical lack of variety, personality and challenge.  If you’ve seen a minute of it, you’ve seen all of it and if you’ve seen thirty minutes of it, you’ve completed the game.  We liked the fact that they’ve tried to put some bezel imagery on the sides of the screen but it’s pretty ugly and while the soundtrack is pretty beefy, there’s just three tracks and they all sound like Megadeth instrumentals. 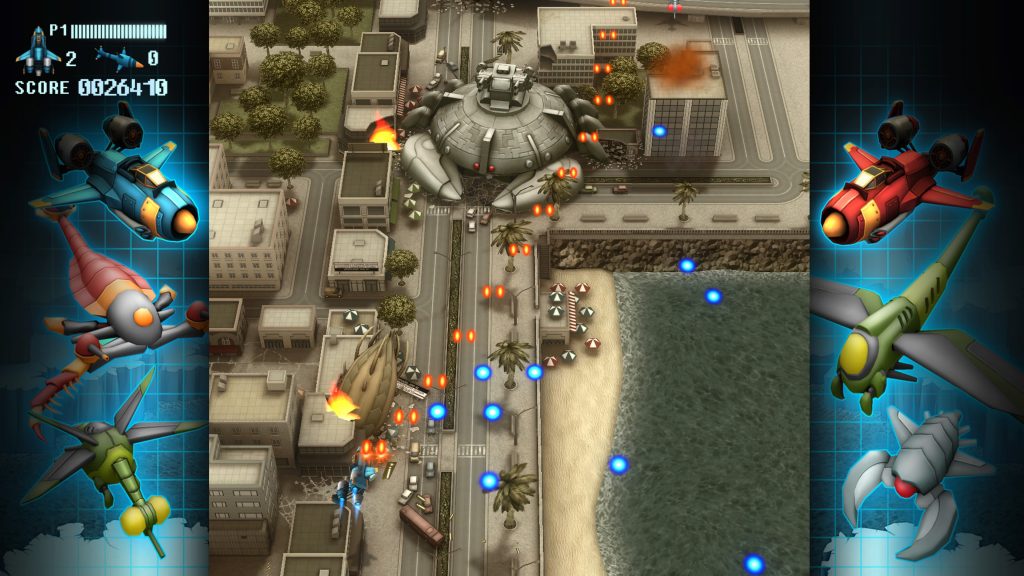 In the end, the game reminds us most of Xevious or rather it’s ‘3D’ sequel which is to say that it’s competent but doesn’t have anything about it that stands out.  It is a potentially good game but is crippled a little by this weird appetite for easy platinums and so that’s where the market is for this game.  There’s a pretty good game in here but it’s hidden away by a couple of deliberate decisions that I’m guessing the publishers made, not the coders.   But they could have done more with this engine for sure.