Frostpunk is a city-building, survival game that first appeared, to very positive reviews, on the PC last year and has now landed on the two big boy consoles to a degree of anticipation.  As with 11 Bit Studios’ other work it’s a technically proficient, well-presented effort that brings some serious originality to the strategy genre.

The game puts you in an alternate past where London, and presumably the rest of the world, is in the grip of a prolonged winter thanks to a couple of volcanoes that have blocked out the sun.  It’s 1886 and London is gone and it’s up to you to lead a group of survivors in their efforts to build a new home.  This new home is in a large round crater which you cannot expand out of.  That means you need to be a little bit more careful when it comes to planning out your city layout because space is finite but it’s a nice wrinkle to the gameplay because your entire world exists within one area, making it easier to plan, manage and react. 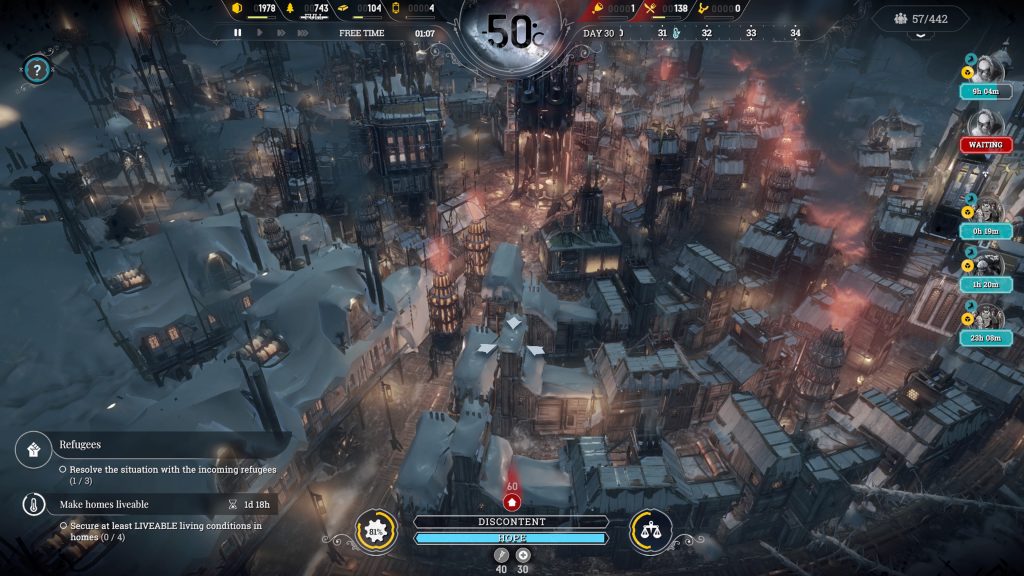 Your new city (well, it’s more of a town) is based around a large generator that must be fed with coal.  Letting the generator run down equals death and so that is your primary concern but you’ll also have to gather and manage other resources such as wood, steel, food and, later, steam cores which are used to build more advanced buildings.  However, beyond that you also have to manage the hopes and fears of your people, each of whom are named and have their own needs.

It’s easy to overstate that part of the game, many other reviews already have, but Frostpunk handles this stuff quite well.  The first few times I played the game, I reacted to every request my people gave me.  Rescuing people, giving people days off, keeping the mortally wounded alive.  I was Mayor Niceguy whenever I got the chance.  But by the end of my first successful campaign, I had implemented a harsh rule based on faith that made Jonathon Price’s zealot leader in Game of Thrones look your favourite teacher at school.   The game offers you various laws to pick from that you can enforce and while at first it’s all ‘hey, let’s not make children work themselves to death’ by the end you’re pretty much executing people for looking at you the wrong way and whistling on a Tuesday. 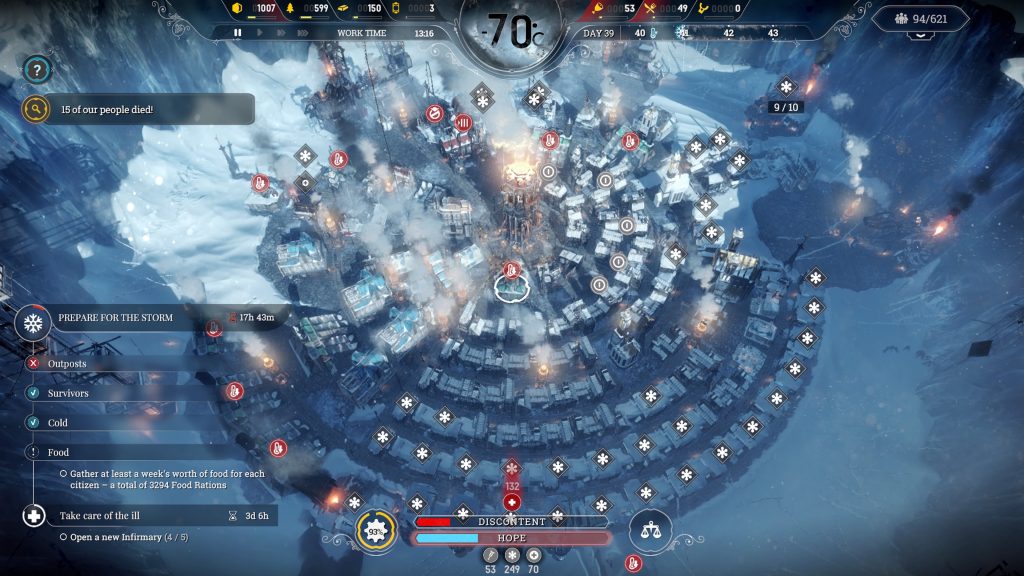 Some of the decisions I made were so unbelievably harsh but, as ever, it was all for the greater good and I fell into that role without flinching.  I can’t say I ever learned anyone’s name, you never really need to, but I still felt something and that’s more than I usually get from my games.  Sure, the city-building chops this game has are on point but the choices that test your character really do add a nice extra element to the game that we didn’t expect.

As you build your town and research new tech, the game starts to come into its own and becomes incredibly hard to put down.  Despite the 1886 setting, the game’s steampunk sensibilities mean that there is a lot of tech available to you.   There are four tech trees with my levels of research to unlock which sounds like a lot (and it is) but it is all manageable and the upgrades all feel desirable which isn’t always the case in these types of game, so it can feel like being a kid in a sweetshop when you’re trying to pick your next upgrade. 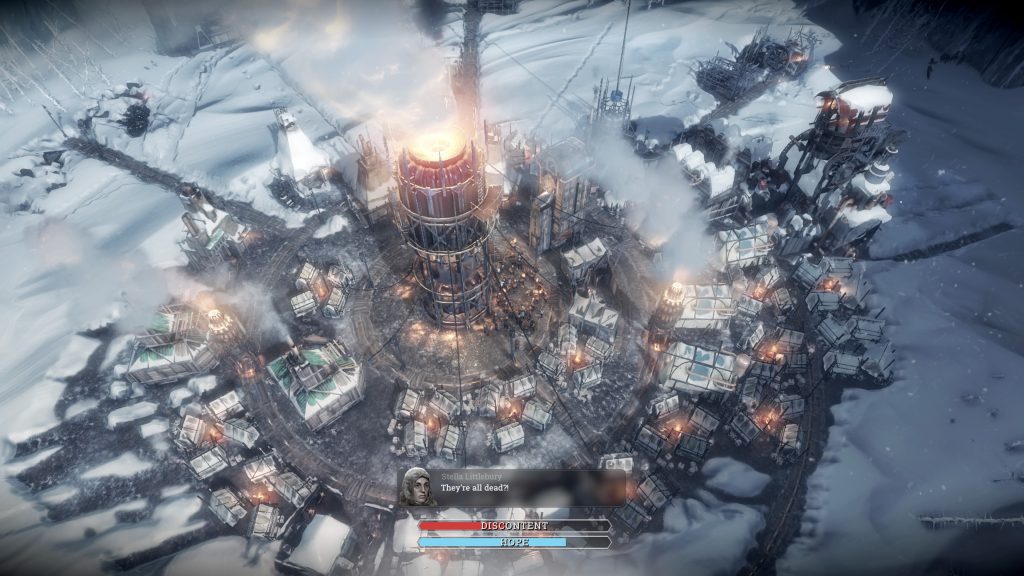 The controls have been well optimised for console play and the pacing of it is great.  It never falls into that trap of just being an extended tutorial and you can fail easily if you don’t make good decisions but I have to admit, I did have to read some beginners’ guides after a while because I kept running out of resources and pissing off my people.

The game reminded me a lot of They Are Billions, a recent zombie RTS where you have to build a good, efficient base before standing up to a final wave of destruction.  In They Are Billions that came from hundreds of zombie bastards but with Frostpunk it’s when that final winter storm comes.  Throughout the game -20 degrees is manageable and -40 is horrible, the final part of the game drops way past that, turning the game into a white-knuckle panic attack and it is brilliant. 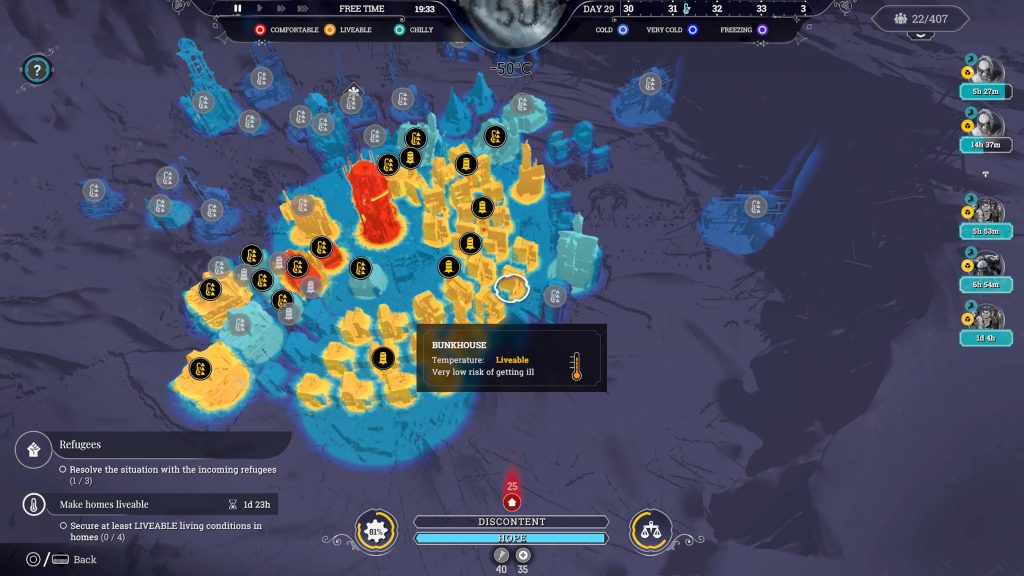 There is a lot to learn here but, crucially, not too much.  It’s all fairly intuitive.  You want more coal?  Build more mines.  Your people are cold?  Build houses.  Upgrade your generator.  I’d recommend checking some guides to get your town self-sufficient so that you’ve got a permanent source of wood, steel and coal but beyond that it’s up to you how you want to proceed.  There probably aren’t too many routes to making a town that will survive but you do have some options.

The game’s presentation is excellent, justifying the game’s mid-range price point.  The graphics are detailed and atmospheric, tiptoeing along that tightrope between being fancy but also being clear enough for you to be able to see what’s going on.  We’d have liked to be able to zoom the camera in a bit more to be able to see some more of that detail but aside from that this is a great looking game.  The sound design is good also, with stirring music and enough voices and decent sound effects to complete the presentation and put you in the mood the game is setting.

Aside from the main campaign you also three other scenarios and an endless mode.  There’s not too much variation in these modes but there doesn’t need to be.  Frostpunk does one thing and does it really well.  So much so that we can see this one staying installed on the PS4 for occasional repeat plays for a long, long time.

Frostpunk
8 Overall
Pros
+ Well-balanced strategic gameplay
+ The right level of complexity
+ Excellent presentation
+ Smartly optimised controls
+ Excellent morality choices
+ Horribly addictive
Cons
- Might lack variation
- Probably better on PC
- Maybe a bit too miserable for its own good
Summary
If strategy games seem boring or scare you off with all their micro-management nonsense, then this strategic city-builder might be the game to win you over. It's polished, deep, accessible, addictive and it will challenge your character more than any game we've played in years.