This is not the review I was expecting to write when I saw the cover art for Freedom Finger, a side-scrolling shoot ’em up from Wide Right Interactive, and specifically the mind of Jim Dirschberger.  The cover art at first glance was pretty simplistic, something we’re used to seeing from indie efforts on PSN.

I requested a code, received one and got the game downloaded.  I was still finishing off my previous review (I’m on a run of very flawed indie shoot ’em ups at the moment) and wasn’t in a hurry to start Freedom Finger.  But I did and got stuck into it, expecting to some sort of iOS-standard homebrew standard tat.

So here’s the thing.  When you review as many games as we do, a lot of them aren’t fun.  A lot are just a struggle and you know it from the first minute.  All of us on the writing team regularly get that ‘I’ve made a terrible mistake’ feeling.  That’s because the hardest thing to code is fun.  You can be clever, detailed, realistic, innovative even.  But making a game actually fun.  That’s something else.  That’s something that most games struggle with. 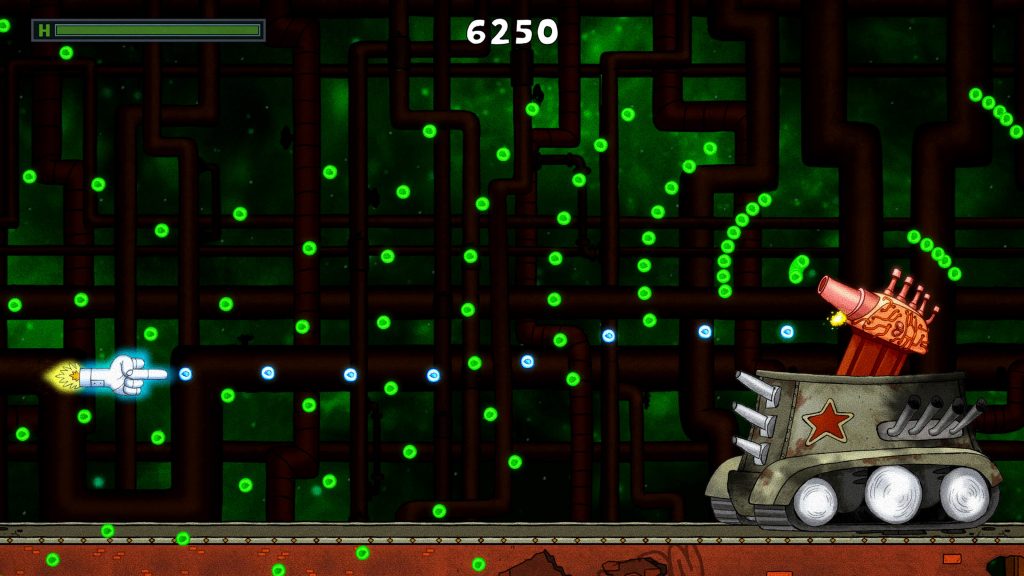 For example, take most AAA games from the last ten years.  Anything that got ‘Game of the Year’ in say the last ten years.  How ‘fun’ are they really?  Is riding a horse or driving a car to your next mission fun?  Is there fun to be had in a giant open world where 90% of it is fields and mountains?  Fetch quests in Skyrim and Bioshock.  Farming fucking potatoes.  Skinning wolves for some reason?  When did busy work and travel become gameplay? 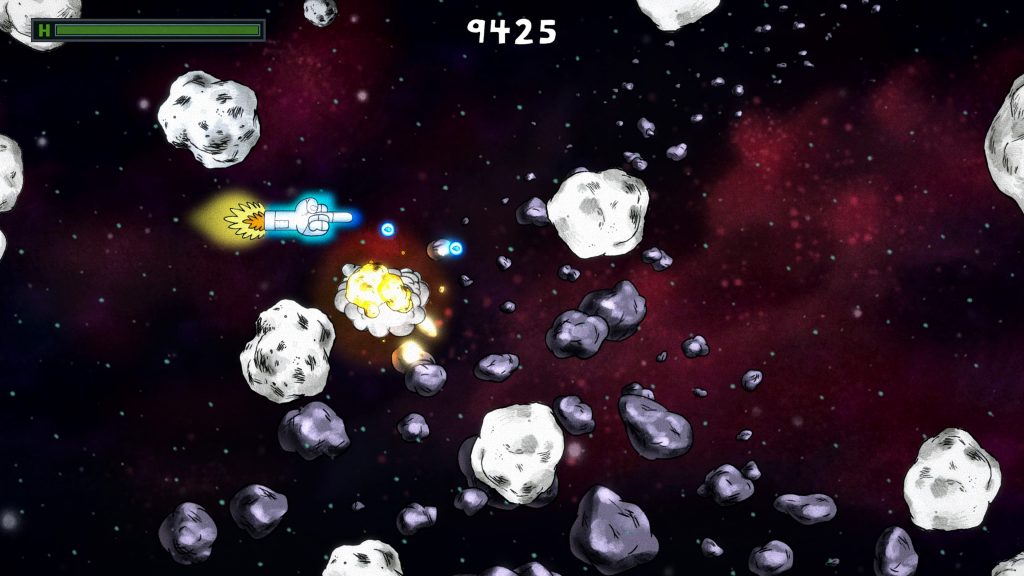 Back to Freedom Finger.  When you fire this up you get some plot right away.  You play a rookie airman called Gamma Ray and your mission is to rescue hostages taken by the Chinese and hidden away on the moon.  Your commanding office, Major Cigar (voiced by Nolan North no less) is pulling the strings and the dialogue between him and Mission Command is genuinely shocking in so far as how politically incorrect it is.  Also, the fact that your ship is a hand giving the middle finger is probably an indication of where the game is going.

A tutorial tells you the basics.  Sure, you move your ship with the left stick or d-pad and shoot with the

button but every good shoot ’em up needs a gimmick and Freedom Finger has a great one.  If you hit the

button you’ll punch enemies for extra damage, this also clears some obstacles too, but if you press

, you’ll grab an enemy.  You’ll then be able to either throw them forward, taking out enemies in their wake, or you can keep firing but you’ll use their weapons rather than your standard gun.  It’s a really cool concept (although G-Darius did something similar) and it adds so good depth.  The fact that Freedom Finger makes melee work in a shoot ’em up is pretty cool too given that that basically never works out. 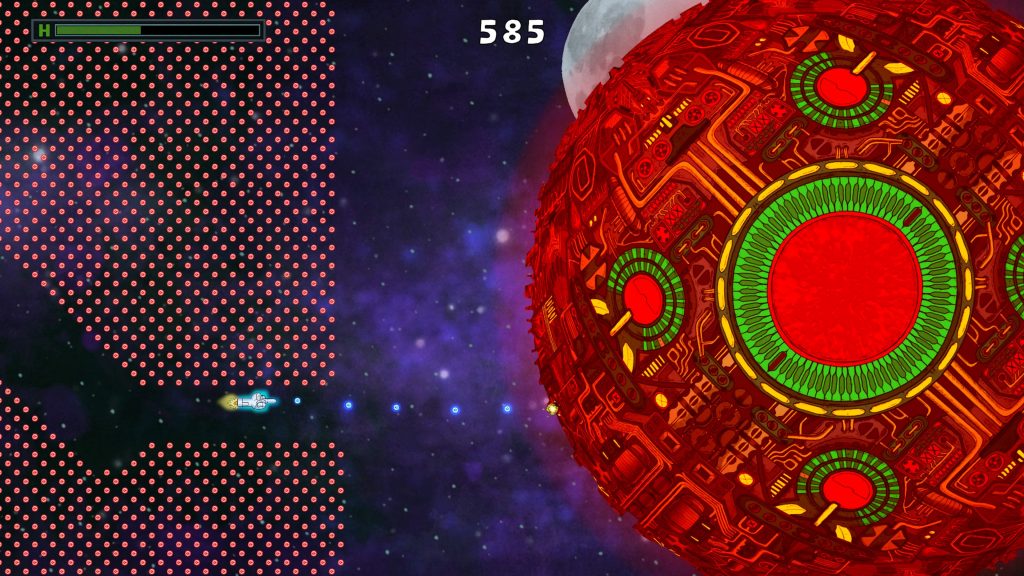 Okay, so the core gameplay is solid.  The controls feel good but with enough additional complexity there to make it worth mastering.  Everything here is either about progressing through the story or just earning as high a score as possible.  Melee attacks and grabs are worth more than regular kills and so hardcore shoot ’em ups will find this interesting enough to master but, thankfully, regular shoot ’em fans who just want fun are catered for too.

You see, while this game riffs on things like R-Type it doesn’t require the sort of memorisation that that game does after the third level (where it frankly becomes pretty joyless).  You can get through most of Freedom Finger by reacting, blasting and generally having fun.  The challenge does ramp up a bit and you might have to replay some levels but it’s never a horrible memory test which is the sort of thing I hate.  If you like Ikaruga then, fine, this might be a bit simple.  But I like enjoying my games. 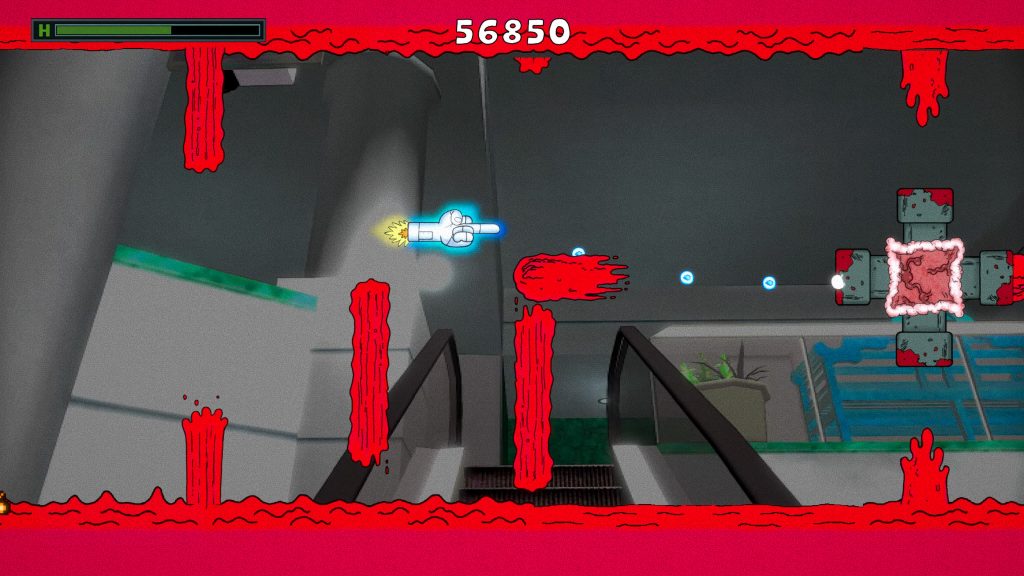 And let’s talk about enjoyment.  We’ve got the gameplay, we’ve got the fun story (that really goes in some crazy directions) but what else?  Okay, well this game has just big, stupid, fun ideas and set pieces to keep you interested (remember: things worth doing and things worth seeing).  You have plot choices that affect the rest of your campaign, to the point where you’ll skip entire levels based on certain choices (you can replay all of them in Arcade Mode though) and this makes things interesting and fun.  It also gives you a reason to replay the whole game.

The other thing about this game is the music.  OH MY GOD THE MUSIC.  While I was playing the first level I noticed that the music was pretty credible stoner rock with actual vocals and everything.  It turns out that every level is set to a licensed song.  The genres span stoner rock, crazy electro weirdness, experimental jazz, goth and more.  I found a bunch of bands to check out (shout out to Drab Majesty, I’m suddenly about that good goth shit again).  A good soundtrack is all well and good but it doesn’t stop there. 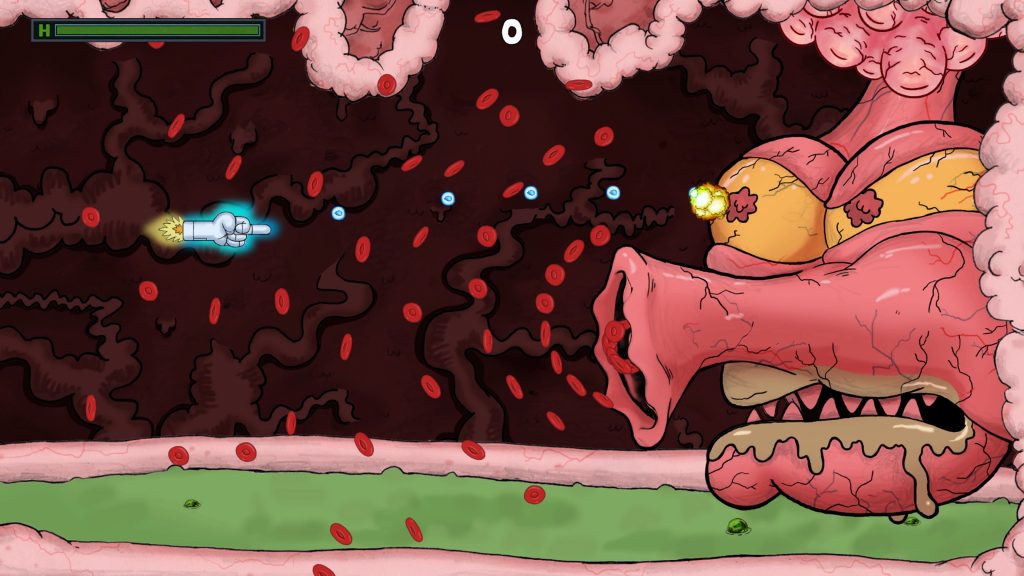 The gameplay is timed to the music.  Enemies drop bombs on the beat, the action pauses when the music does and then goes mental when the tune kicks back in.  Events are timed to certain things in the music.  Not in a blatantly obvious Rez kind of way (shout out to the best game on the PS4) but in a way that catches you out when it happens and just feels really cool, for want of a cooler word.

The visuals are something else too.  Jim Dirschman’s art and animation is cartoon quality, like a crazy reimagining of every good shoot ’em up ever but through a kind of Rick and Morty filter.  I’ll pick some good screenshots but you need to see it on the screen.  Sure, it’s no Horizon: Zero Dawn or Spider-Man but it’s unique and creative.  Every level finds a way to introduce something interesting to look at.  Either on its own merits or in the way it interprets something from shoot ’em up history.  This is kind of what we wanted Cuphead to be. 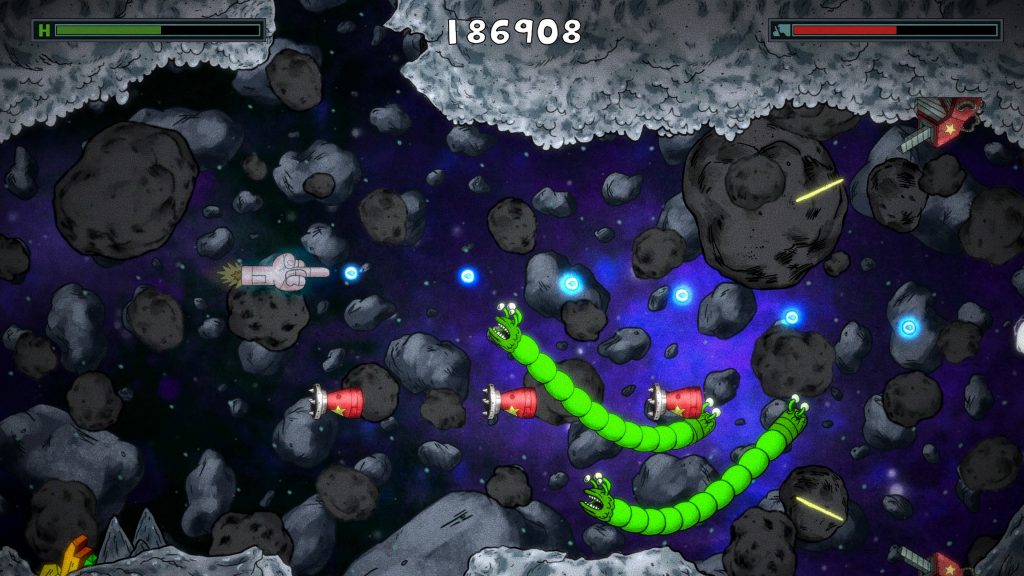 There are so many fun moments in Freedom Finger and so many where I was just so happy to see them because they were interesting, creative or just funny.  It’s not always the most subtle humour ever.  In fact it never is but it’s just a good laugh throughout.  It’s just FUN.  Actual fun.  Not ‘go and take this vase to the woman in the next town and she’ll give an enchanted fucking necklace, you dragon-born prick’ fun but comedy, action, spectacle fun.

I’m something of a minimalist in life and that goes for my PS4.  I’m constantly trimming the games I’ve got installed or removing people of my friend list that I never play with anymore but Freedom Finger is staying forever.  And it’s going on the PS5.  This is awesome.  Everyone is entitled to their opinion, but if you don’t like this, you don’t like enjoyable things.  Freedom Finger is a legit banger.

Freedom Finger
9 Overall
Pros
+ Great gameplay
+ Really funny
+ Fantastic visuals
+ Best soundtrack ever
+ Enjoyable throughout
Cons
- I don't know.
Summary
As this generation of gaming crawls to a slow death, Freedom Finger gives it a big shot of adrenaline and a kick in the nuts. Freedom Finger is the hero we don't deserve.