Foregone is an action game with RPG elements, as well as Metroidvania leanings and is obviously influenced by the excellent Dead Cells. If you’re going to be influenced by something it might as well be one of the best but with it comes a tough comparison. So how does it hold up? 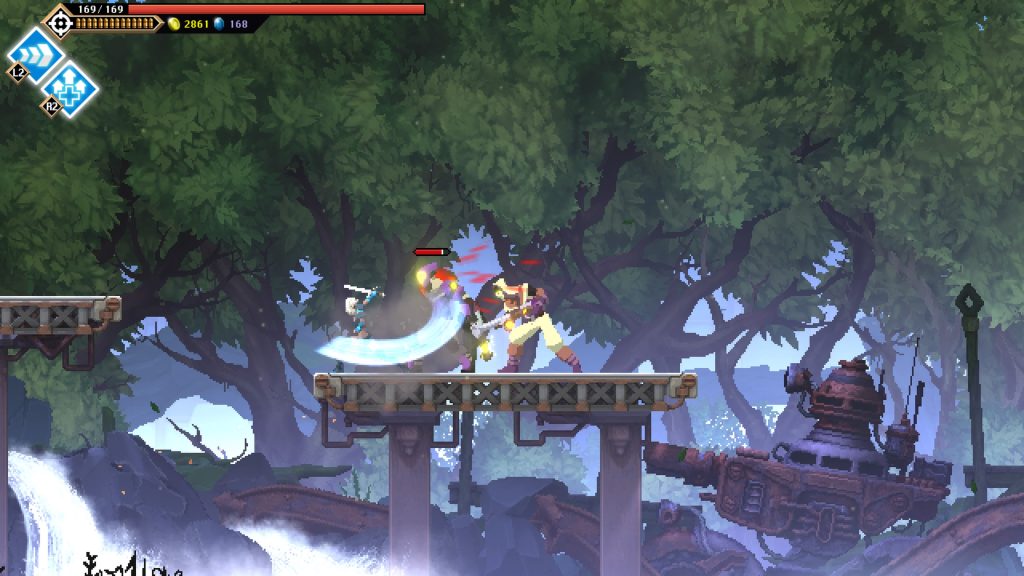 You play as the first Arbiter, a warrior tasked with defeating the Harrow at its source. The Harrow, as is often the case, is a form of corruption that is taking over the land and changing its inhabitants. Your journey takes you through stages learning the nature of the Harrow, the Arbiters and your role in it all.

The levels involve platforming and combat, with your skills developing as the game progresses. Initially you can double jump, slide/dodge and attack. As you defeat bosses you’ll gain a few more skills necessary to beat the coming levels, like an air dash and a ground stomp. Foregone is actually quite linear for this type of game, with each stage being separated by a load rather than being a big interconnected world and although you can go back to stages to find hidden power ups with your new powers you never have to backtrack in order to finish the game.

Your main obstacles will be the enemies you face along the way. There is a decent variety with ranged guys and melee guys, bats, turrets and teleporting enemies. You’ll see them throughout the game, with different colours denoting a stronger variant but even though they repeat there are enough and combined in different formations for it not really to become repetitive. 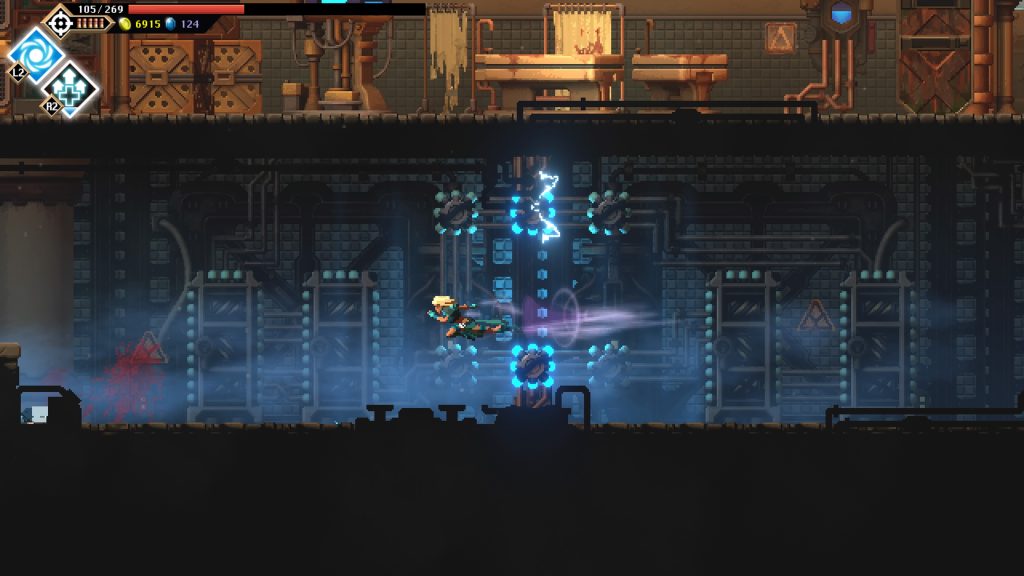 Combat will feel familiar to players of Dead Cells, especially once you’ve unlocked all the powers. You have a melee combo on

and a ranged attack on

. You can find new weapons, armour and accessories within the world or dropped by defeated enemies. There are five different melee weapons, each with their own combos and attack speed and four ranged weapons from a rapid firing pistol to a shotgun to a bow and arrow. These weapons have stats so you may find a type you like but at some point you will find a more powerful weapon that might be different which does incentivise experimentation.

The combat imitates its influence quite well, with the rhythm of attacking, dodging behind the enemy as they attack, getting a few more hits in, dodging away and taking a few long ranged shots before running onto the next obstacle flowing quite well. You will unlock two skills mapped to the shoulder buttons which you can use, such as a barrier, healing or a strength boost or a damaging dash and these are recharged through attacking. You don’t have the range of potential attacks at your command but the movement and utilising your close and long range attacks does give a similar feeling.

This similar feeling is obviously enhanced by the visuals that use the same style as Dead Cells and look great for it. The 3D animations converted into 2D sprites look excellent in motion and some of the backgrounds, especially those with running water look stunning, though I will say the earlier ones tend to be more interesting than the latter ones. The frame rate isn’t the smoothest with it stuttering as the screen scrolls quite often but it’s by no means unplayable. Sound-wise the Arbiter speaks every now and then as do some characters you encounter, but generally you’ll just be running around with the music for company. It’s really good, I remember enjoying a few of them though I’m struggling to bring any to mind right now. 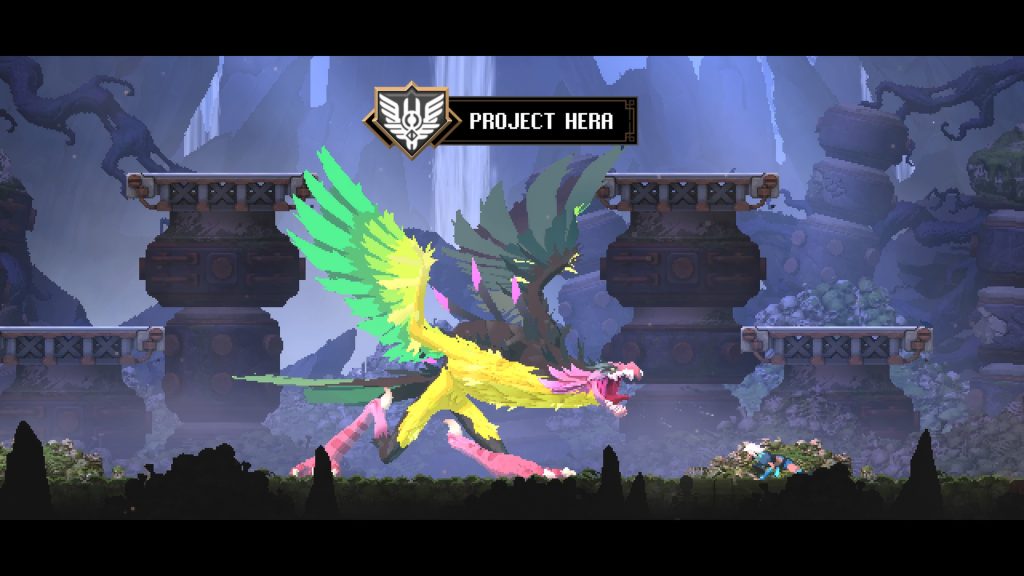 As well as equipment enemies can drop money and experience. If you die then you’ll drop it all. You’ll respawn at the hub where you can use the teleporter to get back close to where you were and retrieve your dropped stuff or you can speak to the Ferryman and rather than risk getting it back, simply retrieve half of it. In the hub you can use the experience to develop a skill tree which will give you bonuses to life and attack and such with three different prongs, each with branching paths within them. You can also boost some of your skills this way too. Money can be used to upgrade your gear at the Blacksmith who will also buy any unwanted equipment.

You’ll want to visit the hub between each stage just to do some inventory management and power up a bit, but then you’ll be back to the quest. Levels will sometimes, but not always, have boss encounters which are probably the more challenging part of the game. I only died a couple of times through the whole thing but the bosses have their own patterns that need to be learned so it can at times take one attempt to see what they have to offer. Each is different and I enjoyed these battles for what they were. 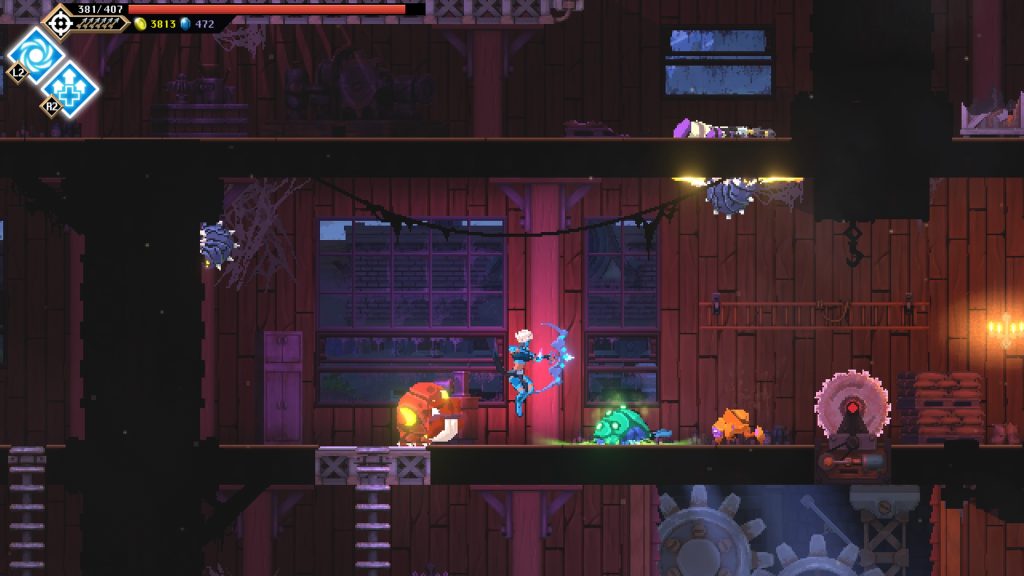 How long Foregone takes will depend on the type of player you are. If you want to look for all the secrets, handily kept track of on your map, including returning to previous areas with new skills, then it’ll obviously take you longer, as it did for me. As I said though you don’t have to do that, you can ignore all the backtracking, hidden walls and so on and still complete it. You’ll have less bonuses but it’ll still be possible and will probably take you far less time. There are a couple of endings and there is a New Game + mode which allows you to keep your equipment and skills but powers up the enemies somewhat, dropping better gear.

Once I’d collected all the movement abilities I started to enjoy Foregone much more. Initially the lack of exploration was disappointing and the combat didn’t stand up to Dead Cells which it obviously wanted to ape. However with all my abilities unlocked things started to flow far better, the combat got more complex, the gear got more interesting and I started to enjoy it much more. Obviously it has similarities to Dead Cells but it is a different type of game to that so you shouldn’t come in expecting the same experience, but I think there will be some crossover in fans. 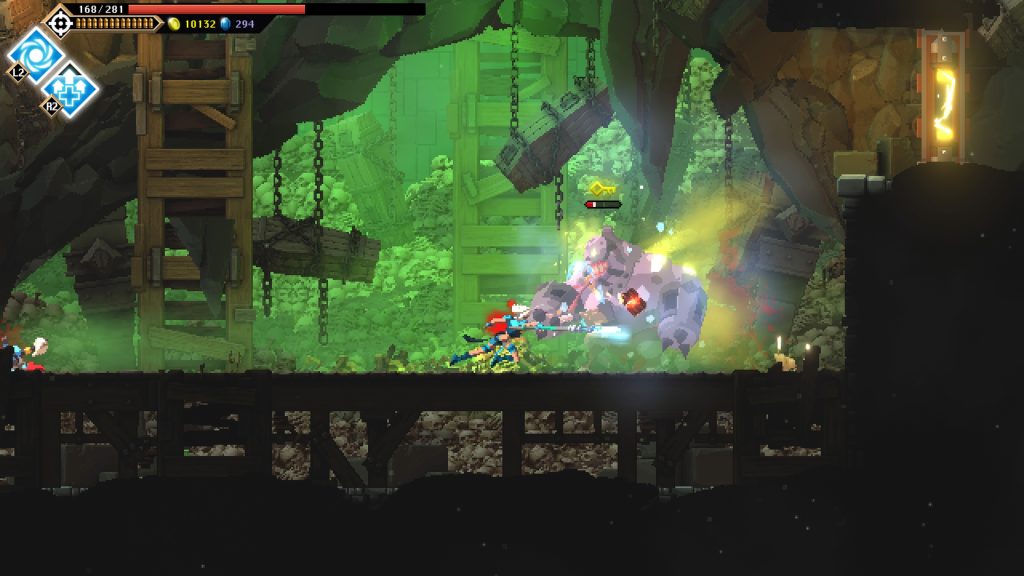 Forgone is stunning to look at from the off and eventually the gameplay becomes a smooth, free flowing combat experience but that takes a bit of time. People who really like to explore may be disappointed with its quite straightforward nature but there is an element of that here, that those who aren’t interested can ignore if they so choose. The fact that you lose everything and have to retrieve it if you die might scare some people but the difficulty isn’t too high at all so that shouldn’t be an issue. It’s a shame that it takes some time to really find its rhythm as that initial impression is fine, but it takes a few hours for Foregone to really shine and those who stick with it will be rewarded.

Foregone
7 Overall
Pros
+ Late game combat is flowing
+ Beautiful visuals
+ You can explore if you want, but you don't have to
Cons
- Is less fun before gaining all the powers
- Some frame rate stuttering
- Quite linear
Summary
Foregone is a more linear take on the Metroidvania formula, with plenty of loot and skills to unlock along the way. Once you have all those skills it becomes a lot of fun to run, jump and dash through the attractive environments, defeating enemies with your range of weapons and skills as you go.