The long and storied Fire Pro Wrestling series has had a slow time making it to the west. There’s been recent attempts to bring it across but Fire Pro Wrestling World looks to finally bring this esteemed grappler to the masses. Timing seems right with WWE games waning in popularity under the stewardship of 2K. 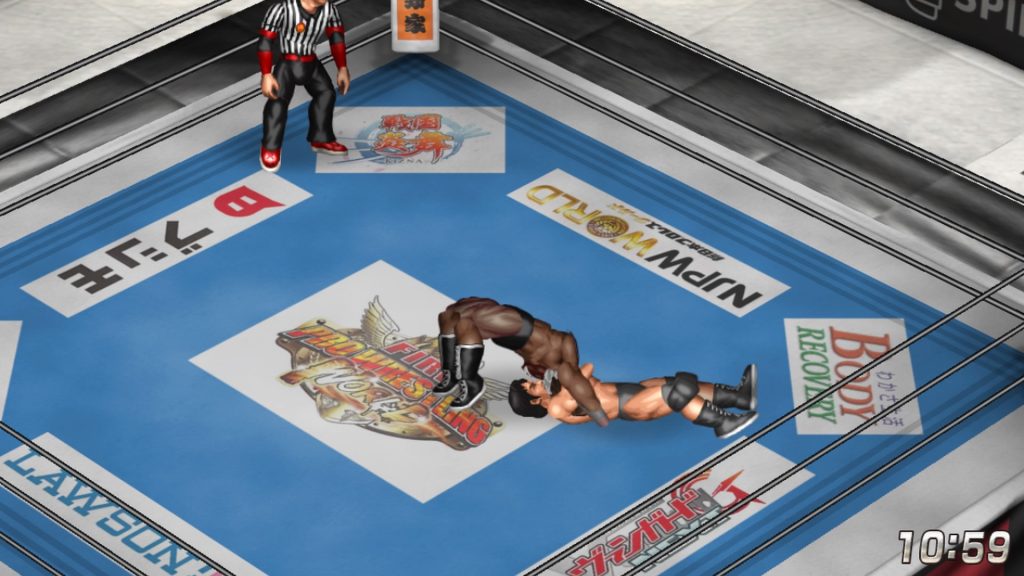 Fire Pro Wrestling World‘s gameplay is pretty simple. You have basic light, medium and heavy strikes and then grapples of the same variety. Locking up and winning a grapple takes a measure of timing which the game does well to teach you. Counters require timing too but the system never gets too complicated. There’s no mini-games to deal with and submissions are moves that happen as soon as you can select it. Movesets can be varied and can be pulled off with ease.

It’s a nice change of pace and reminds me of the older WWF Smackdown! Titles in how simple and clear the fighting is. You’ll do a lot of it so it makes sense to keep Fire Pro Wrestling World  accessible. I was surprised by it. I’d made some false assumption that the series was more complex in its execution. What you get is a fighting model that allows you to focus on a match and maintain a flow around the ring. As someone who prefers the entertainment aspects of the sport, seeing the sport take centre stage is giving me a new appreciation for it. 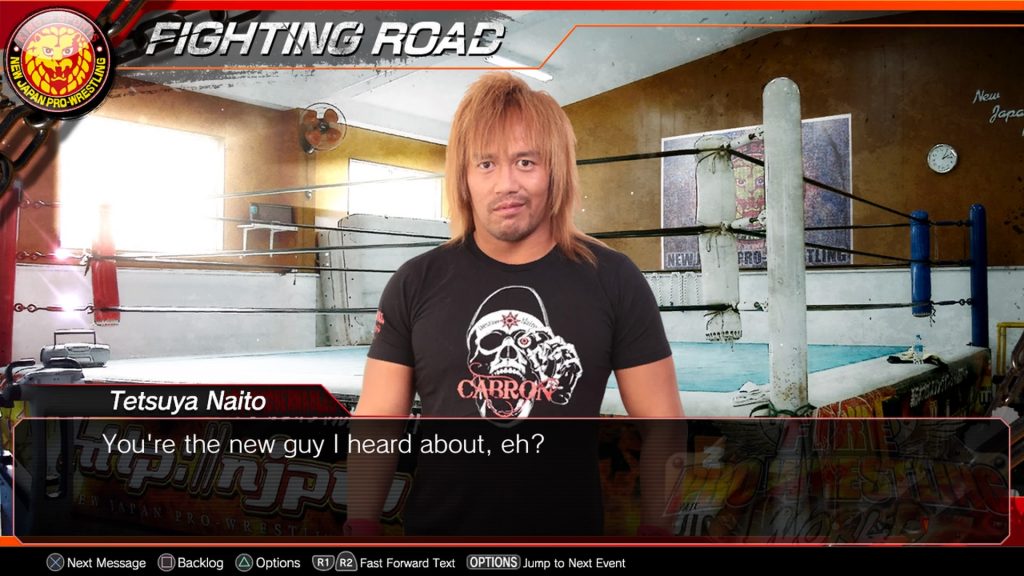 Fatigue plays an important role. In my first match I found my wrestler running out of steam pretty quickly. There’s no visible meter on screen so there’s a real impetus on looking for signs of wearyness. You can regain stamina through breathing so finding opportunities to do so can keep you in a fight. This leads to matches requiring a certain flow as you manage what’s left in your tank whilst trying to win bouts.  The isometric perspective does make running the ropes tricky but it’s nothing you can’t learn.

Fighting Road is Fire Pro Wrestling World‘s story mode. It’s a lengthy campaign as you begin as a NJPW trainee and ascend the ranks. Spike Chunsoft’s visual novel expertise gets kicked into top gear as the story centres around your relationships in the locker room. Rather than looking to create rivalries, the text-based narrative focuses on your character making friendships with some of the company’s best and brightest. Portraits of the talents are used extensively and it’s great to see them lean fully into it. 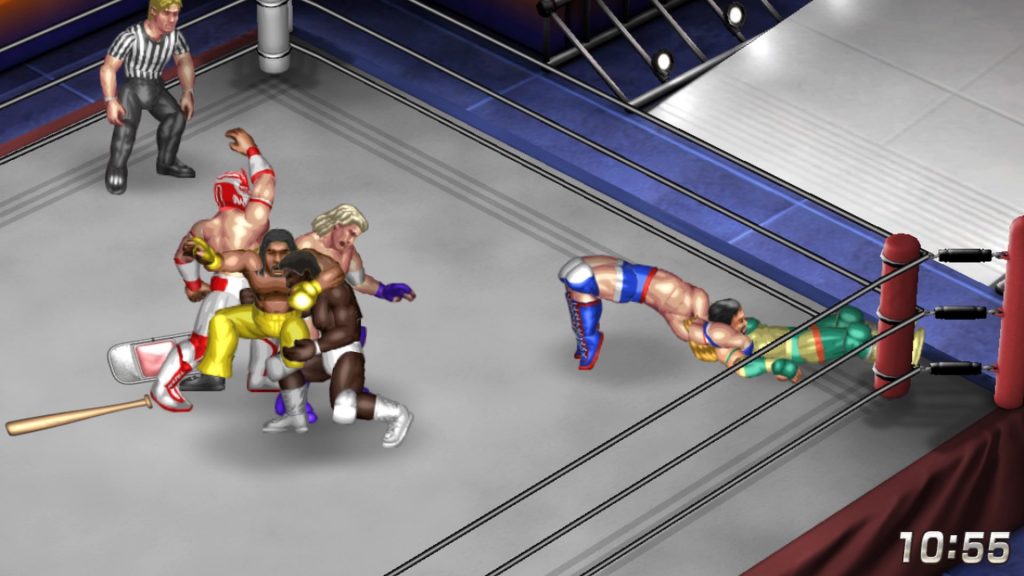 It’s where a lot of the charm and fun lies with a very daft, inoffensive tale of camaraderie. It’s a gigantic journey that I’m looking forward to finishing. It introduces match types slowly but the real appeal for me is seeing what talent signed on to gurn for the camera. Each new member has their their achievements showcased before you. For newcomers to the promotion, it’s a great way to introduce the new faces to the talent. It goes on forever but it does frame the endless fighting well.

You gain experience for bouts and increase your wrestler’s attribute piecemeal. As you progress, more moves are made available and it does help you slowly improve your moveset. There’s a nice sense of constant progression and I’ve found that you can continue through the story regardless of results. Given the size of Fighting Road, it’s helpful as you’re pushed along to bigger and better occasions.  It’s gradual enough to allow for experimentation.

Fire Pro Wrestling World has stayed rigidly to the visual approach of previous games. There’s no attempt to make wrestlers and the world around them feel photo-realistic. It’s an aesthetic choice that remains nostalgic and limits the frames of animation they can play with. At times, it feels like you’re playing with action figures and, whilst it doesn’t look very modern, there’s something to be said about that mindset. Wrestling’s a show with cartoon personalities, after all. Although cartoons don’t tend to bleed as much. The audio glues to that narrative as well. Music used for entrances sounds a little behind the times and crowd noise isn’t a constant element of atmosphere. With the match rating system, their reactions do serve a grander purpose.

Where the series has always excelled is the ability to customise the roster. You can edit, create and import wrestlers easily and the community creations are strong and varied. Trying your hand at making your own efforts can be daunting. There’s thousands of body parts to tinker with and hundreds of moves at your disposal. You see from this just how much Spike Chunsoft care about the sport and the community has sparked into action to bring thousands of superstars to Fire Pro Wrestling World. 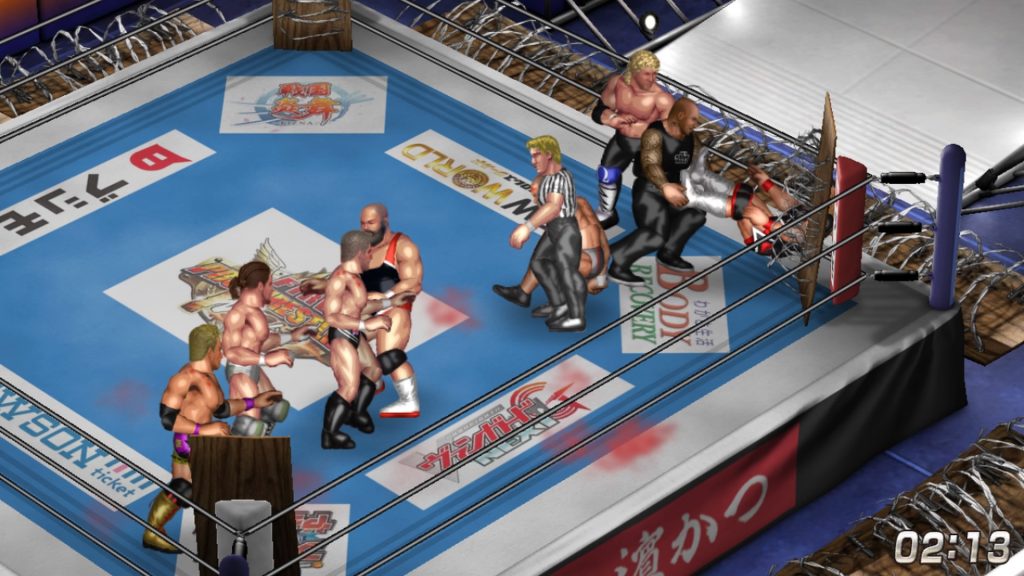 I do feel underwhelmed by the available match types. You do get Japanese standouts like landmine death matches and the Gruesome Fighting and S1 rules do offer something for MMA fans. I miss ladder matches and it’s a shame you can’t engineer a Royal Rumble. You can tweak Battle Royal’s in a number of ways but you’re limited to eight competitors. To be honest, the action can be hard to follow with a full ring.  Landmine deathmatches can become glorious chaos.

Fire Pro Wrestling World reminds me of a time when these games used to be simpler affairs. I can see why the appeal has endured and the action in the ring is stronger for it. Fighting Road gives you a framework for the countless bouts you’ll enter and the community aspect makes me curious to see what that creativity brings.

Fire Pro Wrestling World
8 Overall
Pros
+ Simple, addictive gameplay.
+ Excellent wrestler customisation.
+ Fighting Road holds a lot of charm and character.
+ Surprisingly accessible for newcomers.
Cons
- Matches with a full ring of competitors can be hard to follow.
- The isometric viewpoint can make running the ropes and turnbuckles tricky.
- I miss ladder matches.
Summary
I'm surprised by how much I'm enjoying this. The simpler approach to Fire Pro Wrestling World allows you to get on with fighting and the rules of engagement seem a lot clearer than its contemporaries. Fighting Road adds a long career mode and there's plenty of reasons and ways to battle, even if I do miss some match types not being catered for.