From developer Abrakam and publisher Versus Evil comes Faeria: Chronicles of Gagana, to give its full name. When we first got tipped off about Faeria on PS4 prior to reviewing it, we thought it sounded familiar. Sure enough, we’d already snagged it on PC via the Epic Store freebies we’ve been accumulating.

Faeria is a collectible card game in much the same way as Tragic: The Saddening and Hearthstone. It’s also as greedy as them in terms of how it gets its hooks in to your psyche. Not much different to World of Warcraft in that respect.  You’re compelled to come back with daily rewards and challenges, though whether this beats out our daily Mario 35 & Animal Crossing morning routines remains to be seen. Make no bones about it, this game wants to turn your PS4 into a Faeria-only machine. 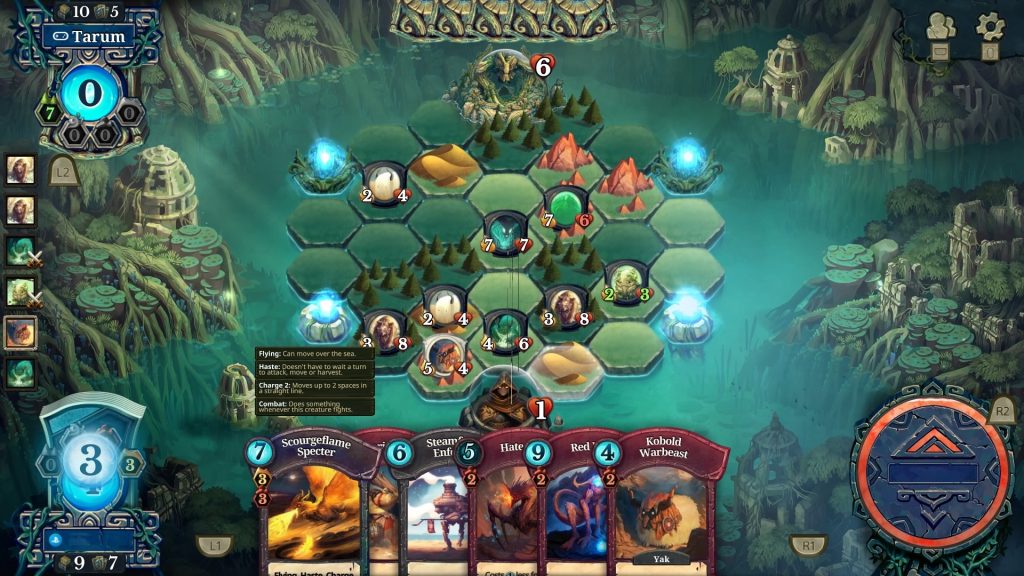 The thing is, it does a pretty good job at doing so. Given our MO here at PSC is to review games as they come in, we can really do without addictive CCGs monopolising our time. There simply isn’t such a thing as a quick game of Faeria you see.

The parallels to Hearthstone and Magic are plain to see. You summon creatures to do battle against opposing gods. The really powerful creatures are unlocked by way of placing lands, just like in MTG. There’s four main archetypes here: red being volcanic, blue being water, green being forests and yellow being dunes. Unlike the other two elephants in the room, the hex based grid that matches play out on actually has the lands showing up physically. It’s a little like one of our XBLA favourites Catan in some respects. It adds a nice tactical layer on top of the potentially otherwise dry card play. 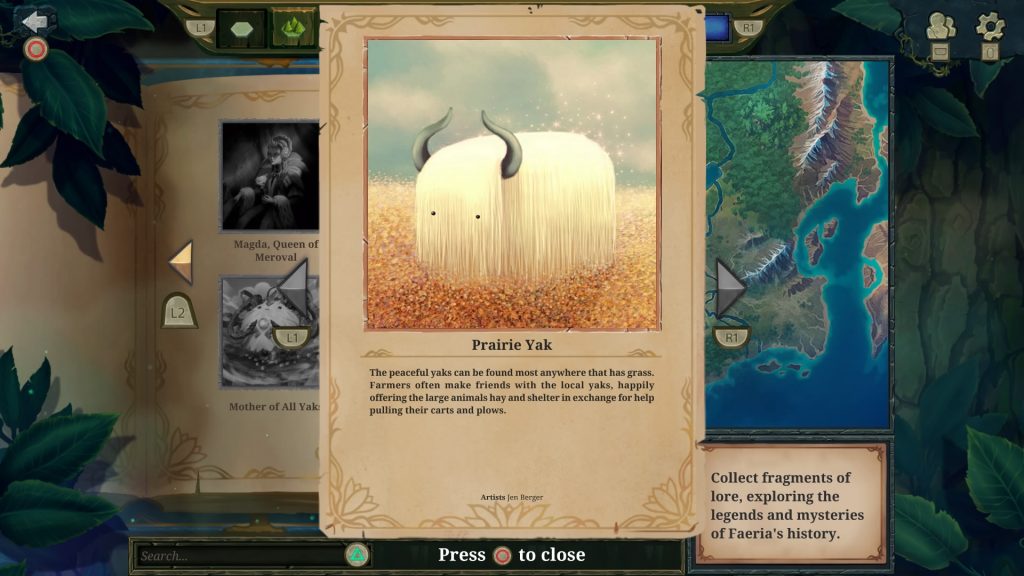 All the creatures you’ll summon are themed accordingly, and it’s clear that the maturity of Faeria on other platforms, especially PC has had an effect on the streamlined effort we’re seeing here. The introduction is identical to that which you’ll encounter on PC and for all intents and purposes the experience generally is no different. Only rather than mouse control, your primary interface is via joypad. We’re happy to report that it’s been well implemented at least. 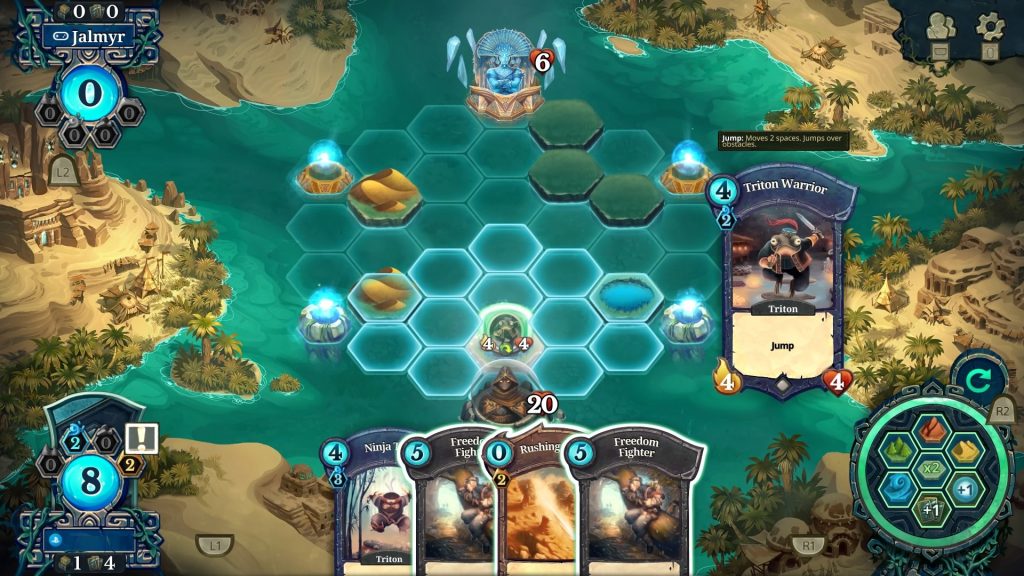 At the outset you’ll have to build a deck and get familiar with the mechanics of the game. Then you’ll get into the missions which are your main resource for building your deck to a position of strength. As you level up you’ll unlock the starter packs for the four land types. It’s a canny way of easing you into how to play Faeria. Along with standard matches you’ll play puzzles. They’re a really nice way of introducing additional mechanics but also proper headscratchers on occasion. Good luck finishing some of them anyway. A few times we prevailed and we weren’t sure why or how. This highlights how some mechanics can be a little oblique. There’s something of an assumption that you’ll be familiar with CCG mechanics, though if you aren’t, this probably isn’t the game for you. 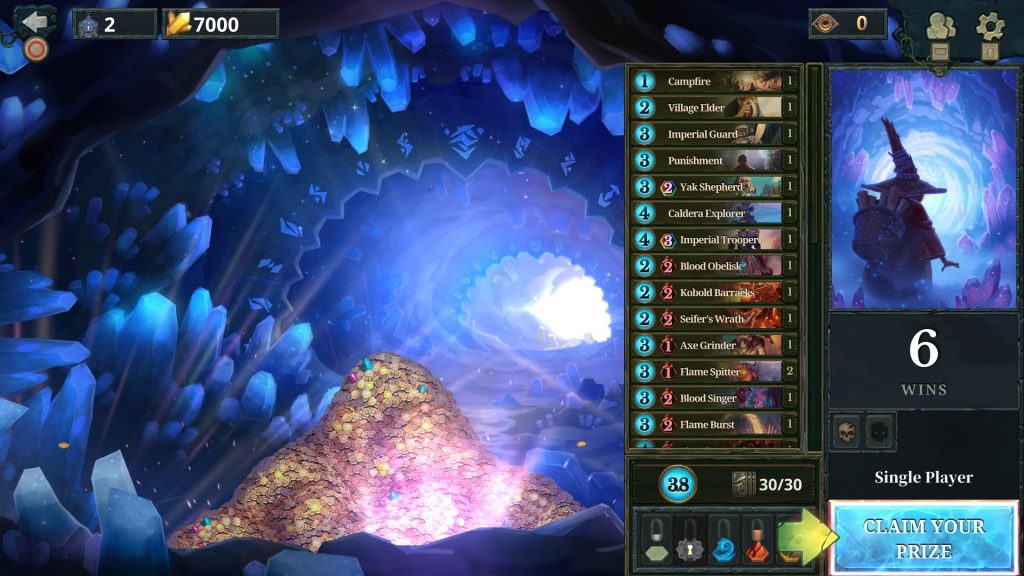 Eventually you’ll unlock Pandora mode which is a great challenge mode and a proper timesink. In effect you’ll wager some resources (card packs in our case) and create a deck on the fly. It’s a nice way to show you what cards await later in the game. It’s also quite the harsh mistress. Our first attempt had us go 6-1 with an overpowered red deck and the second try on the evening we wrote this review had us crash out with a blue deck and two straight losses. If nothing else it proves the old adage that gambling is indeed for mugs and there’s no such thing as a sure bet.

You’ll be able to play another entertaining mode where you’ll face off with an AI or human partner, both of you sharing the one health pool. It’s generally fun but with the AI we found them leaving their base open to attack far too often. Our forces were spread that bit too thin to see off our opponent as well as protect our dozy partner. 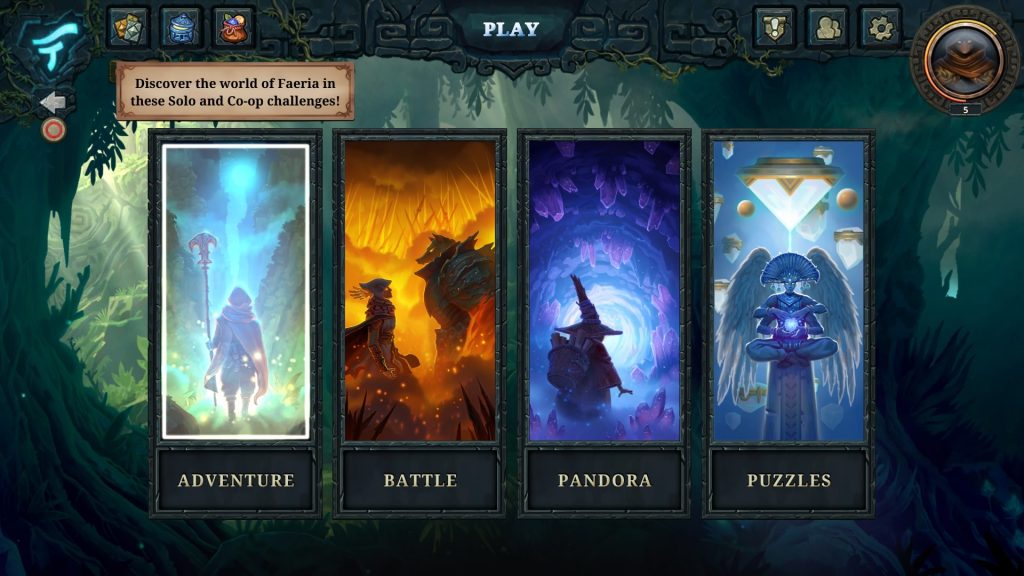 Unlike the last card battler we reviewed, there’s no story in Faeria at all. More a series of lore cards you can unlock as you progress. It’s a shame as it reinforces the feeling that all the missions and challenges are nothing but a prelude to PVP against other players. We’re not even sure the overall playerbase across all formats is sufficient to sustain a decent pool of opponents, so a proper campaign feels like it would help out, especially on console.

As you play you’ll also unlock World Boss mode, though we recommend you leave it until you’re a bit more experienced with a fast deck to get creatures out. The first incidence led to our being quickly overwhelmed by a yak onslaught. No doubt subsequent bosses require different techniques, but as things stood our decks that had served us well otherwise left us defeated. 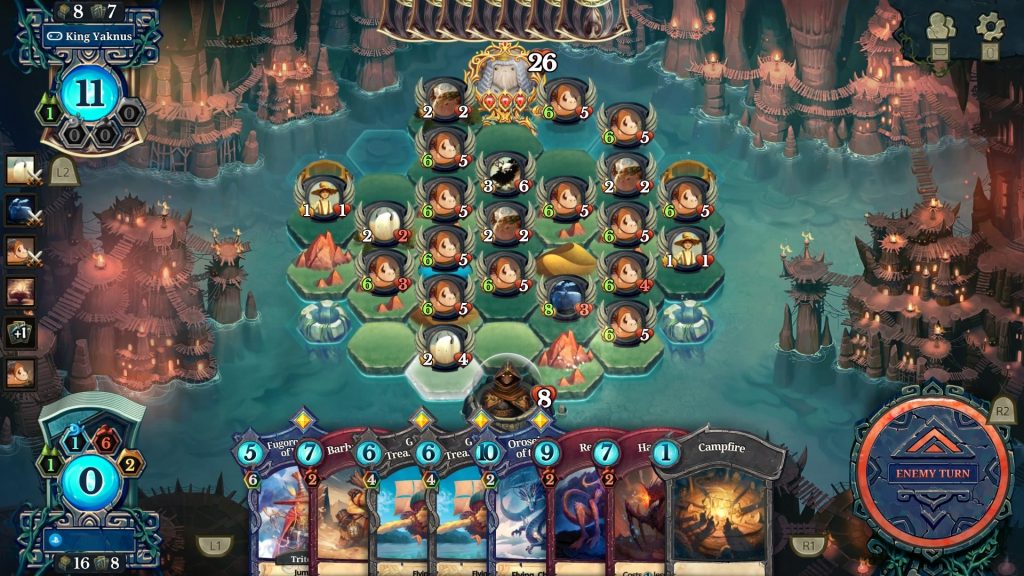 In conclusion, Faeria is an absurdly addictive CCG with many excellent mechanics to get their hooks into you. It feels rather like you’re being coached for the main event of PVP against actual human beans, especially given the campaign is little more than a series of skirmishes against AI opponents. We’re sure matters improve if you’ve a friend to help you out, but trying to bust into the already crowded card battler arena while battling for our attention with PS5 looming smacks a little of bad timing.  We expect we’ll continue to dip in regardless.

Faeria
8 Overall
Pros
+ Excellent hex battles blended with CCG mechanics
+ Puzzles are great brain teasers
+ Addictive as hell and fun with it
+ Yaks a plenty
Cons
- No singleplayer campaign as such
- It all feels like a warmup to play against humans
- Before you know it an evening has passed  by
- Some puzzles solutions require a lot of leaps of logic
Summary
Faeria is a great CCG battler in the grand tradition of Magic and Hearthstone, and just like those it's dependent on how many hours you plough into it in terms of what it gives back. Make no mistake, Faeria wants to be the reason you turn on your PS4. Perhaps the timing of its release is the little off with the imminent PS5 release, but it's no less addictive. We expect we'll continue to dip in regardless.