Explosionade DX is an enhanced version of Mommy’s Best Games’ 2015 run and gunner and is best described as a mix of the platforming and shooting action of games like Contra and Metal Slug but with the old-school coin-op format and problem solving of such single screen classics as Bubble Bobble, Snow Bros. and Rodland.  Having just reviewed the wonderful Shoot 1UP DX by the same developer, we were keen to see what Nathan Founts was able to do with the genre.

The game has you playing as Terry Atticus, an apparently incompetent soldier who is left on toilet cleaning duty while Colonel Bouche and the troops go off to fight the Horrornyms, an invading alien force.  While doing that Atticus finds an experimental mech and ends up waging his own war against the extraterrestrial bastards over sixty levels.  All of this exposition happens in cutscenes with follow up plot points being told over conversations between Atticus and Bouche but you don’t care about that.  How does it play?

Well, as we said the game is a bit of a mix.  For the main run and gun action, things are fairly straightforward.  You move about with the left stick or d-pad and aim with the right (this also shoots, which is always a big plus point for us in any twin-stick shooter).  You can also jump, activate a shield and fire off a secondary grenade launcher that has limited, but slowly recharging, ammo.  The ‘mech’ aspect here doesn’t really apply as you pretty much just feel like someone in an armoured suit rather than being in the larger kind of mech but that’s no big deal, you’ve got all the features you need.  Also, despite being in a mech you’re actually very nimble here which really helps with the platforming aspects of the game. 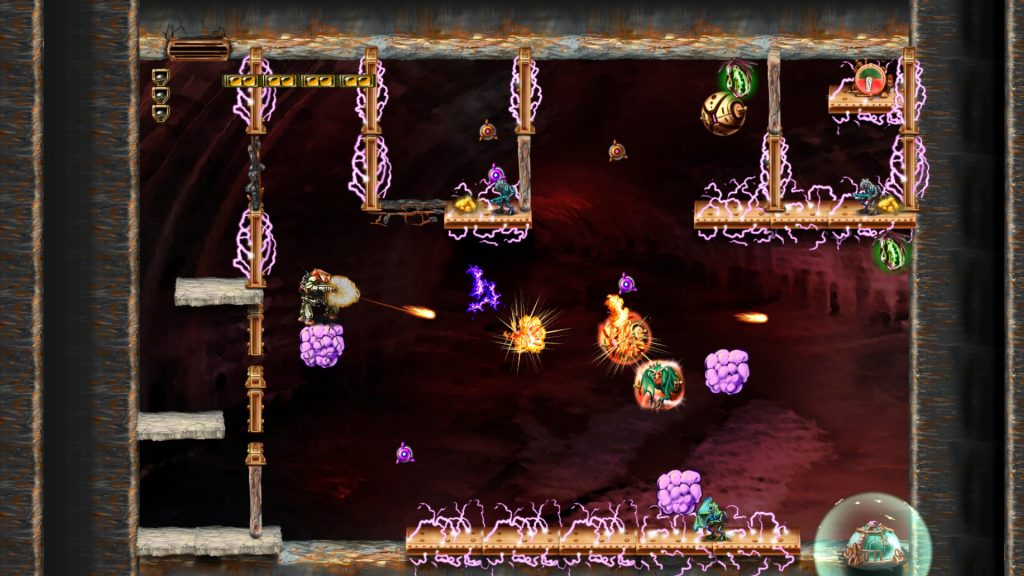 The combat is pretty satisfying with you being able to fire off a steady stream of bullets while various types of enemies attempt to stop you.  You have just enough mobility to be able to dodge attacks and if you do get cornered the shield comes in useful too.  It also has a secondary purpose, it can be used to bounce you which allows you to reach higher platforms.  You have to get your timing right to do this but once you do, the shield becomes invaluable for helping you to explore the levels.

The other aspect to the game is that while you can just head for the exit on each level, you are encouraged to clear the levels first and this can be a bit more tricky.  Some enemies are hard to kill, others are hard to get to and most are dangerous.  This requires you to plan a little on each stage to make sure that you clear out the enemies effectively and efficiently although this isn’t a puzzle game, you can’t really fail unless you die or if you can’t kill one specific type of enemy (these ones can only die if you blow up the platform they are on, so if you destroy all the platforms without killing them then you can’t get an All Clear award).  You do need to be careful though as things can get a bit hairy in there when you’ve got a screen full of hard to kill enemies gunning for you. 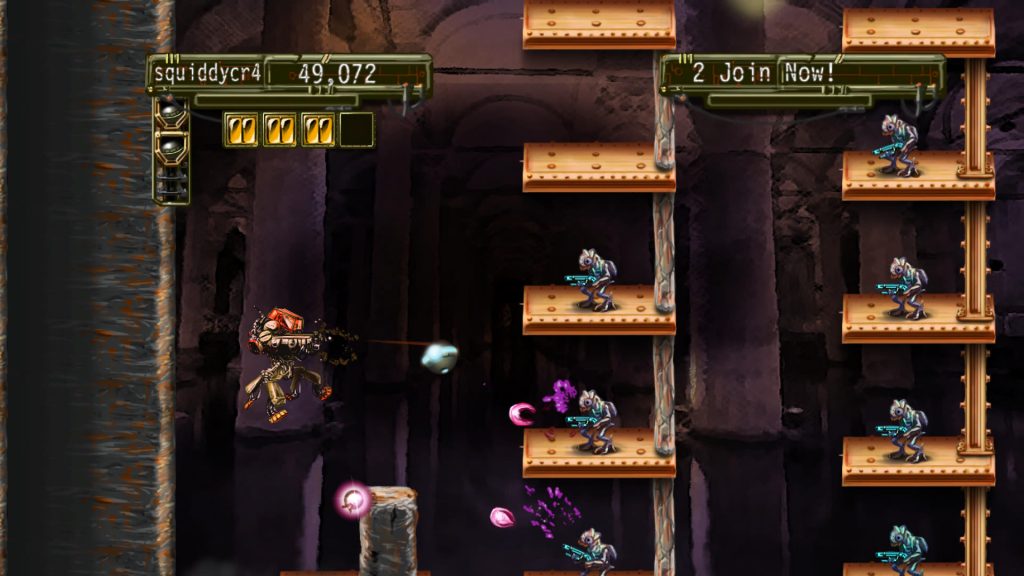 The main niggle though is that there aren’t enough enemy types.  There’s really just a handful of meaningfully different enemies and the bosses even feel a bit similar too.  There’s definitely scope for more variation here, especially now that we have three or four decades of arcade classics to use as inspiration.

Explosionade DX handles the challenge quite well.  You get a choice of three difficulty levels which does help you to customise your challenge a bit and you can replay individual stages in the game’s ‘Practice’ mode which still counts towards some of the trophies.  One cool quality of life feature is that you can zoom in and out of the stage, giving you a choice between a close up view and one that puts the whole stage on screen.  We played most of the game in the zoomed in mode until towards the end when we realised the zoomed out version was much more useful.  It’s a quick toggle on the

button though, so you can easily adjust.

As with Shoot 1UP DX, you can also alter the game’s speed making it much slower or faster.  It’s an odd option but it works well if you want to change the feel and difficulty a little.  You also get leaderboards for each difficulty setting too, although these still need a few more players as we ended up in second place on our first attempt which says more about the game needing an audience than it does about our skills! 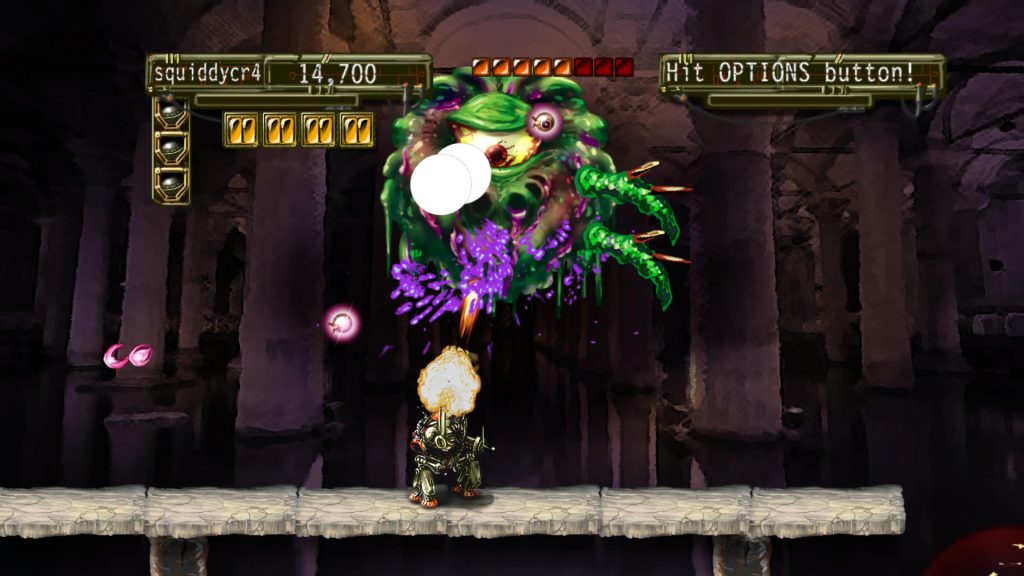 Explosionade DX works well enough.  The shooting is good and the level design is alright.  It’s not as creative as Shoot 1UP DX was, especially in terms of the boss battles and the levels can feel pretty samey both in terms of level layouts and also visually.  The stages are all set underground which gives everything a bit of a gloomy feel.  That’s not to say the graphics are bad which isn’t the case, everything looks clean and well-defined albeit with a deliberately simple animation style, but there’s nothing that stands out.  The sound is good though with beefy sound effects and a decent music.

Overall, this is a good game and a fun spin on the run and gun genre.  We really appreciated the quick-fire single screen levels and the variable level of challenge but while the story was fairly funny we would have liked to have seen a bit more creativity in terms of enemy and level designs and a few power-ups might have made the gameplay pop a little more.  However, as a bit of pick up and play arcade style action the game is enjoyable enough and the game’s leaderboards and trophy set should encourage more play.   It’s cheap too, so you can’t go too far wrong but if you’ve not played it, we’d suggest you buy MBG’s Shoot 1UP DX instead.

Explosionade DX
7 Overall
Pros
+ The single screen shooter format works well
+ Good controls
+ Well presented
+ We didn't miss the Metroidvania sprawl at all
Cons
- Not enough variation in enemies or levels
- Level designs are a bit gloomy
- Boss battles are underwhelming
- Game mechanics are a bit simple
Summary
Explosionade DX is a solid run and gunner that benefits from having single screen levels. We like it but would have liked to see a bit more invention from the developer, especially given what they've managed previously.