Exp Parasite is not an RPG like the name might suggest. Although I couldn’t see it anywhere in the game apparently the ‘Exp’ is short for ‘Experimental’ rather than ‘Experience’ as you play as a parasite who can control mechanical objects and must do so to progress through ten challenging, platforming stages. I say platforming, but you can’t actually jump. 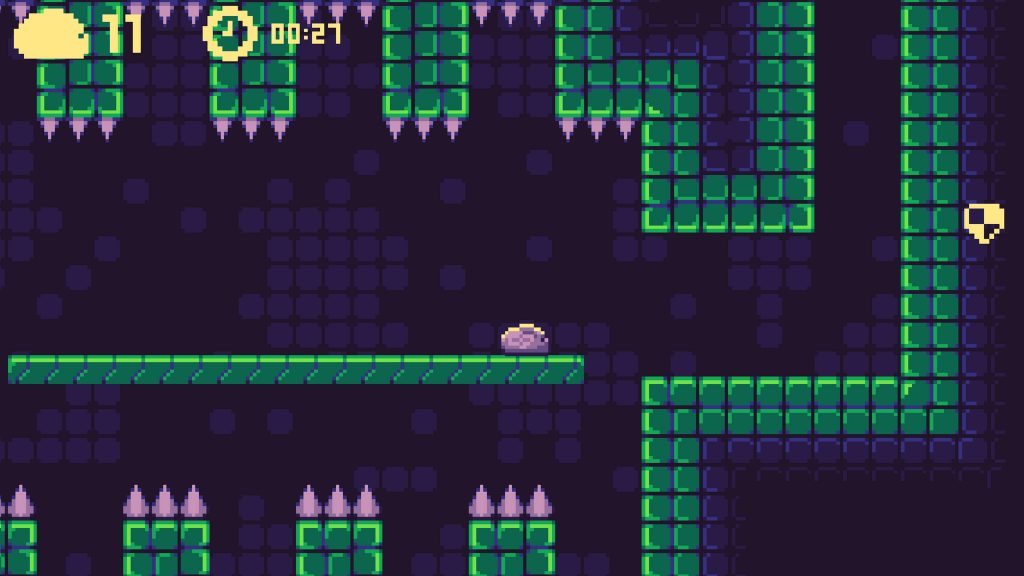 Like the excellent VVVVVV you must traverse the levels by flipping between the floor and the ceiling. Initially you’ll do this just to make it over slight lips but you’ll soon be avoiding spikes, lasers, missiles and, the difficult platformer favourite, saw blades. One of Exp Parasite‘s strengths is the way it constantly introduces new mechanics and obstacles. There’s only ten levels but each does something a little different for you to think about. This includes a few vehicles which you’ll be required to use either as a shield, to destroy blocks or to fly. This can lead to some Flappy Bird inspired levels which is an interesting choice.

Unlike other games of this type you don’t have infinite lives but you start with ten and must complete it within that limit. Die too much and you’ll have to start from from the beginning of that level. If you do die the checkpoints are very generous though, usually placing you on the nearest solid ground. Levels take minutes rather than the seconds of something like Super Meat Boy and your blob is also much slower paced so, at least first time through, you’ll need those checkpoints and the cache of lives. 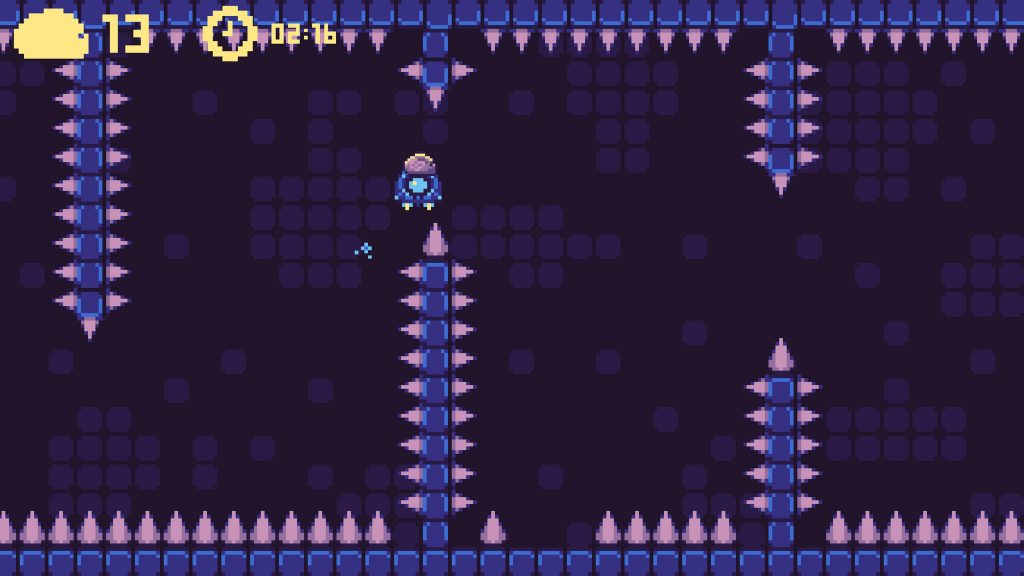 It still took me three hours to get through all the stages thanks to the challenge and that was without worrying about the four objectives you can complete on each level. There’s one based on a time limit, one for not dying (or perhaps doing it within a certain amount of lives, it’s not clear), one for finding the hidden secrets and one for beating the level on Hard difficulty. These aren’t just for fun however as you gain tokens for each one you beat which can be spent on a simple skill tree. You can beat the game without any of these but you can upgrade to start levels with more lives, unlock a short invincibility skill and the ability to slow time both of which can be upgraded.

As I stated earlier, Exp Parasite‘s strength is in its variety. Each level brings something new and even the last level has a brand new mechanic requiring a brief in game text tutorial. This and the reasonable challenge make for an enjoyable time. Not everything is great however. The problems start instantly when you have to use the analogue stick to move your character. The dpad isn’t used at all so why that’s not an option I don’t know as it’s more natural. Yet in the menus you have to use the dpad, the analogue stick doesn’t work. Switching back and forth is not particularly intuitive. 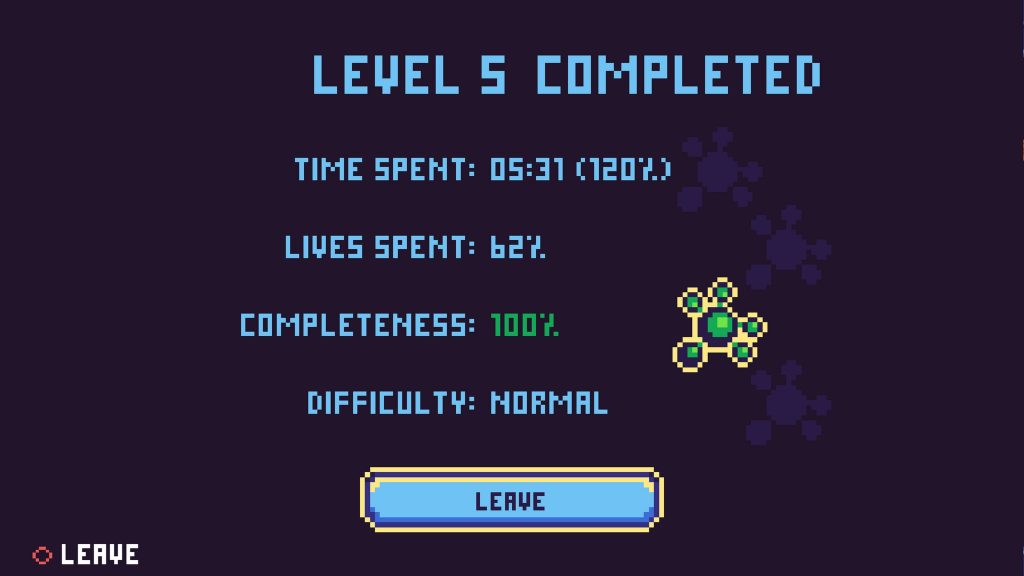 Then there’s the controls themselves. Generally they work fine but being a little blob sometimes your character isn’t the most responsive, especially around edges. It can miss a ledge and yet still climb on top of it at times, which feels odd but can save you, but can also screw you over if you want to drop off a ledge. There is the odd instance of blind jumps where you’re expected to jump from floor to ceiling or vice versa without knowing what’s off the screen. It even makes a feature of it in level eight as you drop through a spike gauntlet right at the end to drain you of some lives before the boss.

Each level ends in a boss and they’re pretty much all terrible. They all involve pattern recognition which is fine, but they also nearly all rely on randomness to damage them. This can mean you can have a relatively simple fight or an absolutely terrible one through no fault of your own. If you arrive with a stock of lives you can normally brute force your way through it but they are not enjoyable at all. 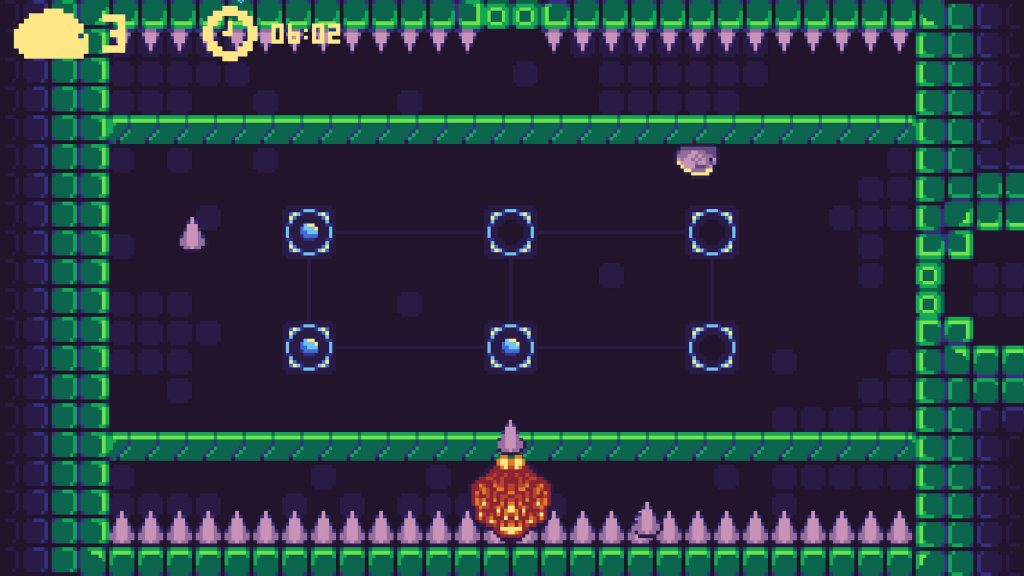 The graphics are also, purposefully, lo-fi which got old a while ago. I’d describe them as sub-NES, like an 80’s home computer. There’s very little character to the enemies, obstacles or environments which merely change colour from stage to stage. The music is similar with chip tunes which haven’t left any lasting impression but didn’t start to grate on repeated plays which is appreciated.

And then we get to the bugs. The most obvious one is when you lose all your lives. It should kick you back to the stage select, but sometimes it’ll just sit on the screen where you died. You can pause it and select ‘leave’ to get back to the level select screen, or at least I could sometimes. After level eight or so that wouldn’t work either so I’d have to close the game and reopen it in order to try again. These types of games rely on a quick retry and this is the complete opposite of that and probably added a huge chunk to my play time. That combined with the ‘Gravity Holes’ introduced in the final level make me wonder how much testing took place. 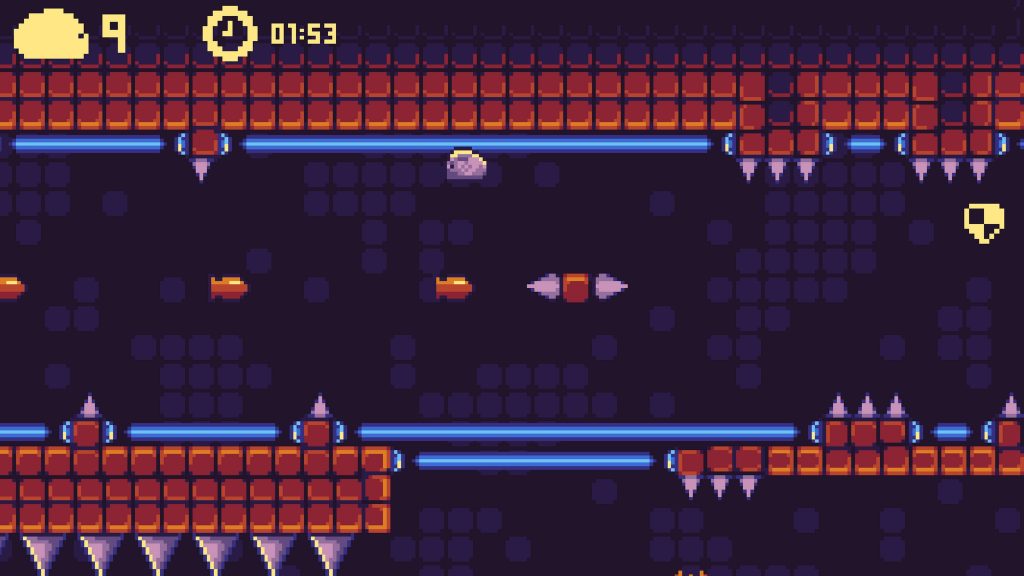 Most games introduce a new mechanic or concept in a safe area so you can learn about them before introducing the tough stuff gradually. Not Exp Parasite. These Gravity Holes allow you to jump off them in mid air, so you’ll flip from floor to ceiling but do a little hop in the air to get more distance. A fine concept but you don’t get any instruction on how they work and the first one is over a pit of spikes and the second encounter is three in a row over a pit of spikes.

I was stuck on this for ages, sometimes hitting them, sometimes missing them and I had no idea what I was doing right or wrong. Every time I lost all my lives I had to restart the game as it wouldn’t drop back to the level select properly so it took me far to long to figure out what I had to press and the timing of it. I did eventually beat it and the inputs were as you’d expect, just maybe a little tight on the timing side, but without any instruction or feedback I had no idea if what I was attempting was even correct. 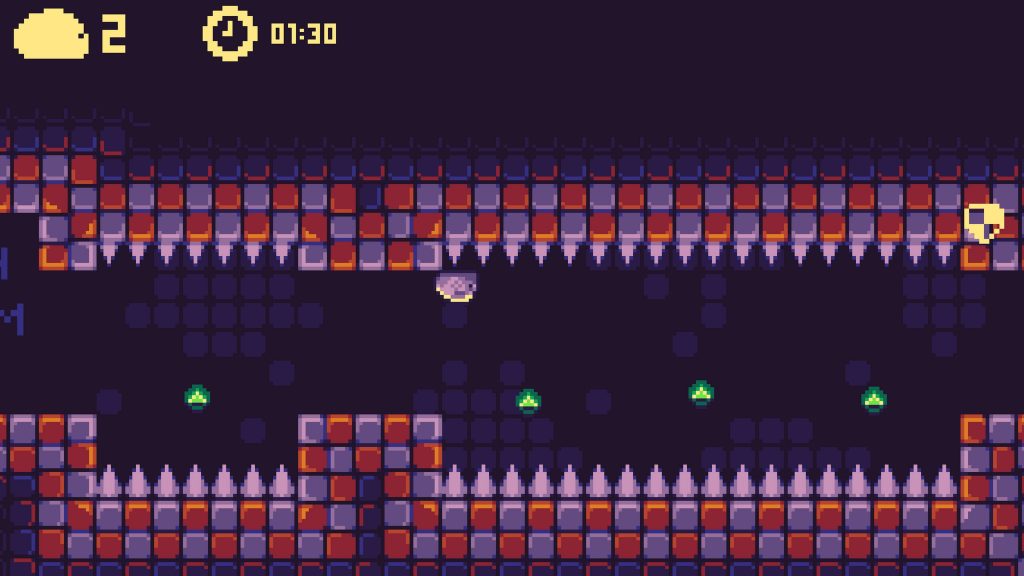 Which takes what would have been a fairly average difficult platformer and knocks a couple of points off the score unfortunately. I like a challenge and am a completionist but after beating the levels I have no interest in returning to get all the objectives or get the final trophy I’m missing. It was enjoyable enough to get through it all, even with all the frustrations but there are a lot of issues here as well which mar the experience quite a bit. The challenging platformer is a popular genre and if you like the fast paced ones then Exp Parasite is not for you but for the price it can keep you busy for an afternoon at the very least.

Exp Parasite
4 Overall
Pros
+ Constantly introducing new ideas
+ Goals give you reasons to replay and master levels
Cons
- Some control issues
- Infuriating bugs
- Bosses are too reliant on randomness
Summary
Exp Parasite is a challenging platformer with plenty of mechanical variety. Unfortunately the bosses are a weak point and there are some major bugs that need to be endured on top of the difficulty in order to reach the end and complete all those level goals.