Pro Evolution Soccer was beginning to lose its charm with me. Last season, the game provided a challenge beyond my reach whilst there wasn’t much new to shout about. With a new name and touting an improved Master League, eFootball Pro Evolution Soccer 2020 is looking to jump start some interest in their flagship sport series. 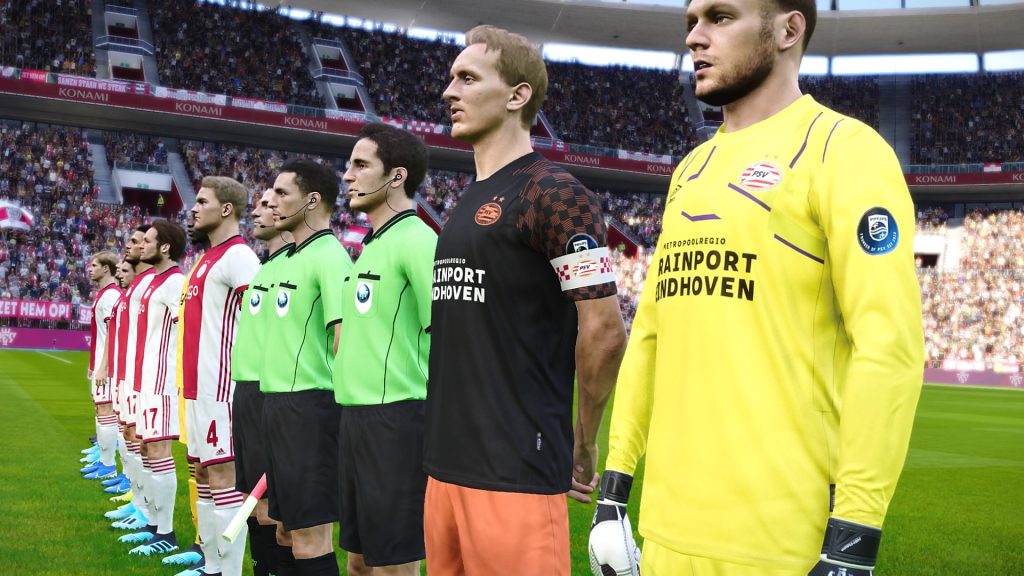 The football takes a slower pace than last year. As a result, I have time to think between passes and teams don’t employ the heavy pressure that last season lived by. Coupled with the new camera angle, the pitch seems spacious and much less compact. It defaults to an angled view which I find a little extreme. It’s mimics a real broadcast well but you can customise the camera for each individual game mode. I’ve found myself with a lot more confidence in possession. Building attacks remains as satisfying as ever and defensively, I have time to consider my options. I also find shooting from range a viable option and something I can gamble with a lot more.

Players show improvisational touches as they try to gain possession. They’ll stretch to keep a ball in play and generally compete for lost causes. I’ve seen a couple of head-height bicycle kicks which are nice to see and generally, players are sharper. On the flip-side, the opposition are prone to more errors. This is a tricky thing to seem human but, for the most part, I feel eFootball Pro Evolution Soccer 2020 manages to find the balance. 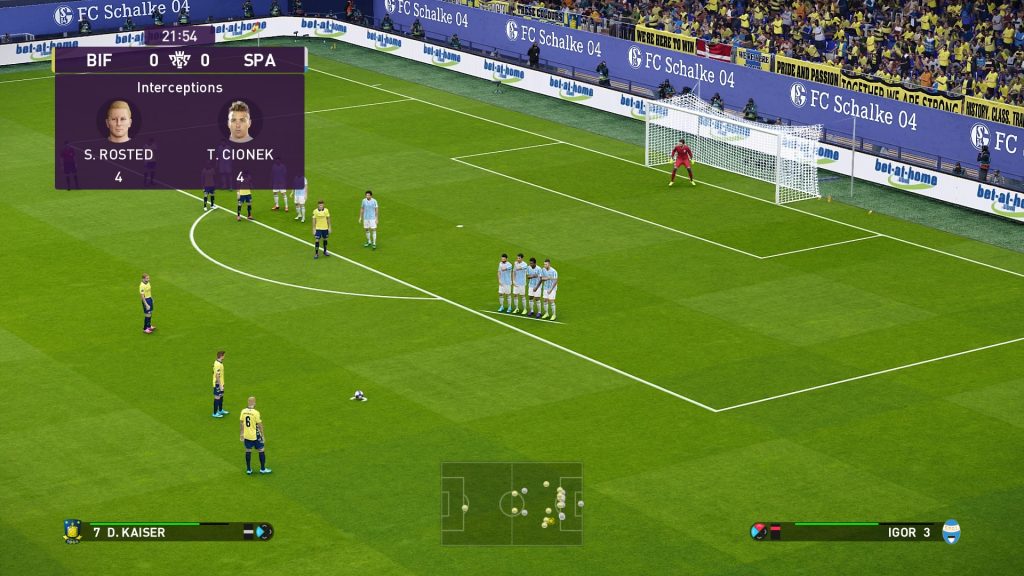 I’m still finding my level but the tempo has allowed me to get back to Top Player difficulty for the first time in years. I worry that the AI can appear a little toothless but I’m still losing matches from lapses of my own concentration. Liverpool’s helter-skelter approach seems toned down but I still had to worry about key players causing problems. It’s a game where hard work pays off and the match engine is very accommodating. It’s enjoyable, rewarding and it feels like the little touches have combined well.

Presentation remains almost identical to last season. Visually, you’ve got the Fox engine doing it’s usually work as it renders wet pitches well and players animate realistically. There’s not a lot to see that’s new but the dynamic weather still adds a tough of extra strategy. The crowd pipes up over contentious challenges and tough tackles see fouled players emit a great scream. Overall, the atmosphere still feels a little flat. It’s not helped by the same commentary being used from John Champion and Jim Beglin.

A lot has been made of Master League’s new additions. When you start a new game, you no longer create your own manager likeness from scratch. Instead, some of football’s legends grace the dugout. I miss the opportunity to create a manager of your own and the use of these likenesses is a little lacklustre.

Master League wants to tell more of a story this year and it’s achieved using scenes that punctuate your time between matches. These include press conferences, meetings with the chairman, team-talks and so on. Occasionally you are given a chance to offer input with some dialogue choices but the impact isn’t always clear. I had the chairman advise they were after a top six finish but told him I’d prefer to finish in the top half. I’m assuming that’s me influencing expectations for the year. 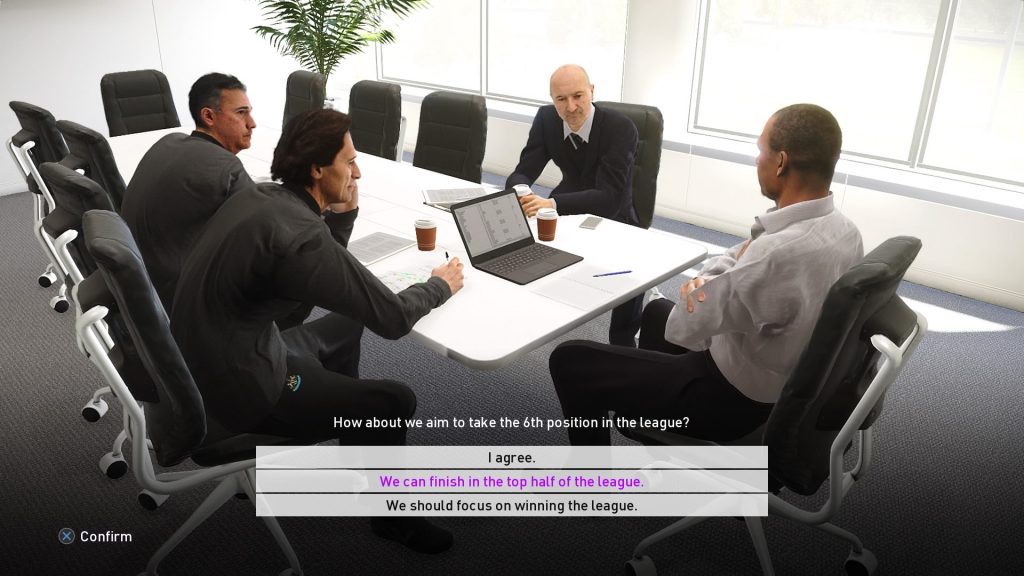 Transfers have seen an overhaul with their values mimicking real life madness. It does add a touch of realism and the idea of renegotiating transfers does at least make business feel like more of a tussle. I’ve noticed the AI is very active in the transfer market. I saw some big name free agents and new faces move between teams. A couple of them are surprising but Liverpool signing El Shaarawy really seemed to fit.

I feel like these additions don’t really provide something groundbreaking. The press interactions can be skipped and, whilst it is nice to see Diego Maradona irate on the touchline, I miss the chance to create a manager from your own imagination. I also feel the menus for the mode have become a little too busy. It’s not as radical as PES Productions have been portraying and, for the most part, it’s the same familiar mode.

It’s the same sentiment with the remaining modes. MyClub is largely unchanged which, given how much of a persistent online mode that is, doesn’t want to upset those already invested. Online performs well with matchmaking working, if a little slow to find and confirm an opponent. Standalone leagues and cups remain with a patch coming eventually to include next year’s Euro 2020 tournament.

In readiness for this, every UEFA nation is included in eFootball Pro Evolution Soccer 2020. All but three of them are licensed. It’s a level of effort I wasn’t expecting but it really, really bolsters the European player count and gives you a chance to play as the likes of Kosovo and San Marino for probably the first time in a decade. It does unfortunately mean other continents are left holding station. When it comes to licensed leagues, PES Productions haven’t taken any backward steps. 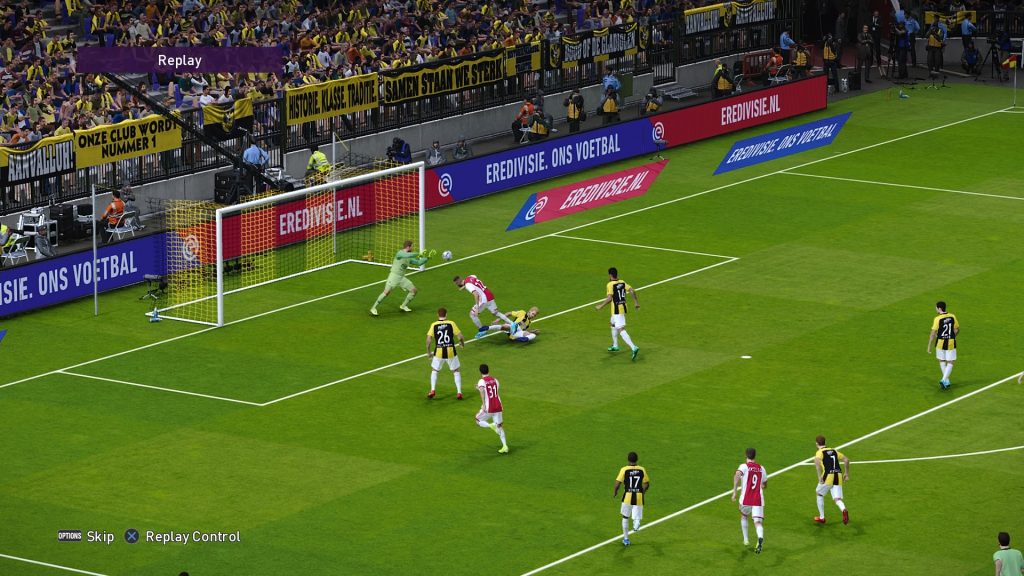 The leagues added last season remain with Brazilian’s Serie B now complimenting the top flight. Italy’s Serie A is licensed almost fully but now an unlicensed version of Serie B is included. With representation always being a big issue with the series, I’m always pleased when they add more to the package. For what they miss, the ability to import squads and kits remain. This year they’ve even added a tutorial for it.

Whilst I do feel some of the new inclusions are overblown, my time on the pitch feels much more enjoyable than last season. Seeing more of the pitch is vital and helps you plan a match out effectively. The slower pace does well to compliment this and I find the action on the pitch to be rewarding and engrossing.

eFootball Pro Evolution Soccer 2020
8 Overall
Pros
+ Plays a really accomplished game of football.
+ A lot more new teams to play as.
+ The new camera does help you keep track of the play.
+ A more methodical pace gives you time to plan your movements.
Cons
- Playing as a real-life manager takes away more than it adds.
- The new Master League interactions feel somewhat superficial.
- The commentary and sound is starting to really feel old.
- On pitch presentation feels a touch stagnant.
Summary
The additions to the Master League don't carry much of an impact but the representation of the sport has a more methodical change of pace. The new camera angles make a difference and inclusion of every European nation does dramatically bolster the player and team counts. I'm enjoying this a lot more with the opposition more willing to chase lost causes, misplace passes and generally feel a touch more human.  I really, really like how this plays.