Earth Atlantis is a multi-directional scrolling shoot ’em up and comes to us from indie developers/publishers Headup Games and while we’ll get be getting into the pros and cons of the game in due course, one thing should stand out immediately: those visuals.

In Earth Atlantis, you play as a submarine pilot (wait… is it pilot? It’s not driver, right? Anyway…) which is a pretty good job to have given that the Earth is underwater now. To make matters worse, our new robot overlords have taken on fish shapes and want to hunt us all down.  Pricks. 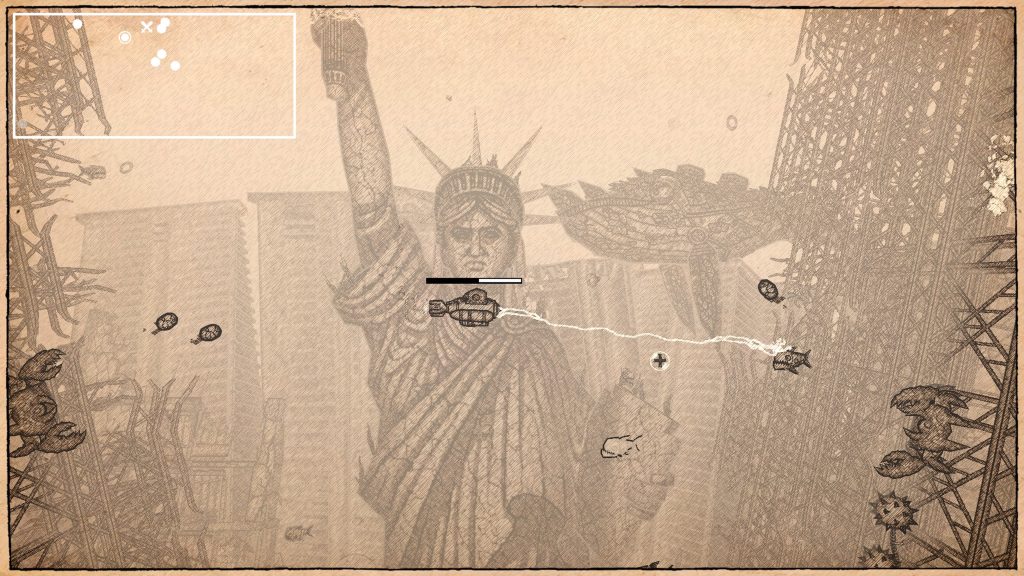 Luckily, you’ll be doing the hunting. As you pilot your submarine around the reasonably small playing area, you’ll be looking for two things. Power-ups and bosses. Your way will often be blocked though, thanks to the crumbling mounds of scenery that will obstruct your progress. So there’s a degree of exploration required as your mini-map only shows you locations but doesn’t break down the actual map for you at all and you’ll be fighting your way through smaller enemies the whole time as you make your way to the next boss.

These are obviously larger than your regular popcorn enemy types and have various weapons with which to dispatch you. You’ll need to be careful and patient if you want to survive them but Earth Atlantis isn’t a bullet-hell game so you’ll probably make some good progress when you play but if you want to increase your chances of survival you’ll need to get those upgrades. You can upgrade your basic weapon (which also fires behind you for extra coverage). You’ll also pick up sub-weapons such as bombs, missiles, homing missiles and an electrical attack. These feel annoyingly weedy though, especially in boss battles which is annoying as every good shoot ’em up has the good sense to let you feel like a badass.

You’ll have your main gun fully upgraded within minutes also which is a shame as we’d have liked to that to have taken a bit longer as once it’s done you’ve got nothing else to look forward to during the campaign mode. 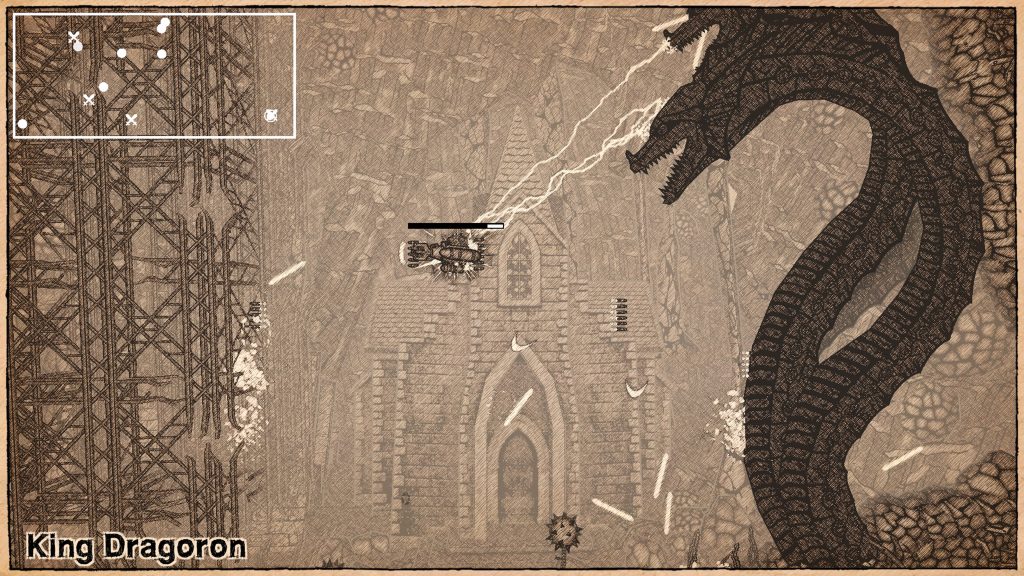 The gameplay itself is pretty simple. Float around trying to find your way to the next boss, kill it and move on. There’s no puzzle element to it which makes the game a lot more streamlined than something like PixelJunk Shooter but also a fair bit less interesting. But the game does offer three difficulty levels which means that shoot ’em up experts should be alright if they fancy a challenge.

One area where the game lets itself down is with the controls.  You move with the left stick and shoot with

but there is no reason to not be shooting, so you’ll be holding that trigger down the whole time.  Between that and the two-way firing, you’d have been much better off with a twin-stick control method but this method works fine for the game and certainly doesn’t get in the way.

Visually the game is a mixed bag. It’s beautiful with its technical drawing art-style. It really stands out. However, the monochrome palette begins to feel very restricted almost immediately. The enemy designs are really well drawn. They aren’t necessarily full of character thanks to the serious art style but what character does a giant robot fish have anyway?

Beyond that, there’s not a ton else you can say about the game. Its main ‘Quest’ mode will last you less than four hours, which is arguably a bit too long for a shoot ’em up. The trophy list has a trophy for beating it in ninety minutes though but we can’t see too many people trying to go back and beat their times.  The game also offers another mode which plays the same but has a time limit that you need to keep building up by picking up time icons but there’s not much reason to play it once you’ve beaten the main campaign unless you really want those trophies. 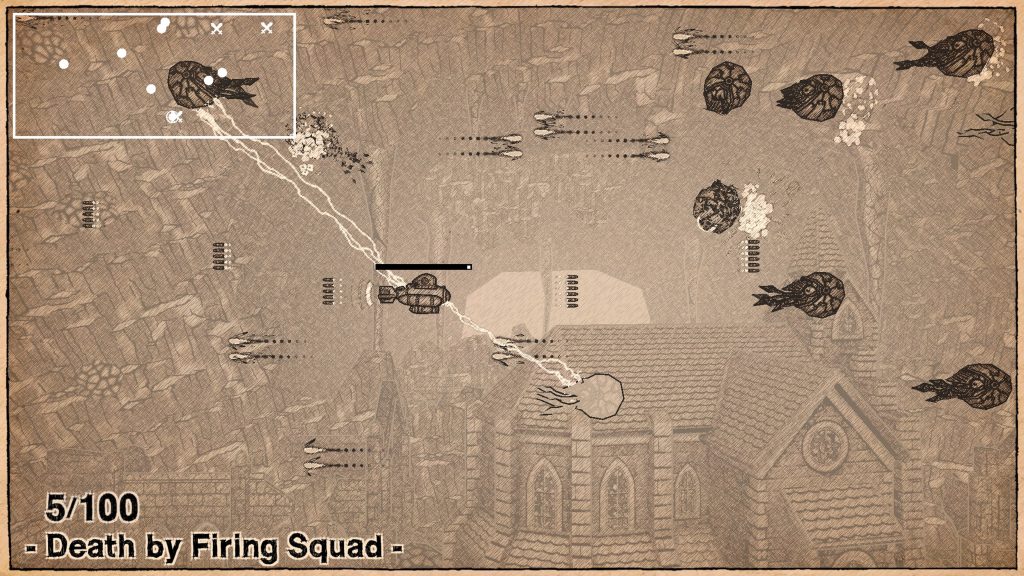 The overall lack of variety in the game is what hurts it the most as well as a lack of dynamism. Shoot ’em ups should be explosive, full of destruction and spectacular where as Earth Atlantis is channelling more of a staid, Victorian approach. As an aesthetic it works but it doesn’t really suit this genre.

Make an indie game about a boy who has lost his diary or some shit and give it this art style and you’ve got a cult hit on your hands. But shoot ’em up fans will likely be bored of this before they finish their first playthrough.

We like it for what it is though. If you’ve come from the Metacritic page for this game you’ll see a 1/10 score there which is definitely harsh. We found Sine Mora to be far less fun than this game and as I type this final sentence, I feel myself settling on a respectable but generous five out of ten.  Four would be harsh and anything more would be glossing over the game’s larger faults (namely the fact that it does get a bit repetitive and dull which is pretty major).

Earth Atlantis
5 Overall
Pros
+ Lovely art style
+ Boss battles are fair and generally okay to play through
+ Offers a few upgrades and ships to try
Cons
- Main campaign is too long
- Gets really repetitive
- Better control options come to mind
- Visuals, as lovely as they are, lack variety
Summary
Earth Atlantis is a different kind of shoot 'em up that may well win fans with its excellent art style but will no doubt lose plenty due to the repetitive nature of the gameplay. It is a solidly put together game but one that is a few design choices away from being one we can truly recommend.