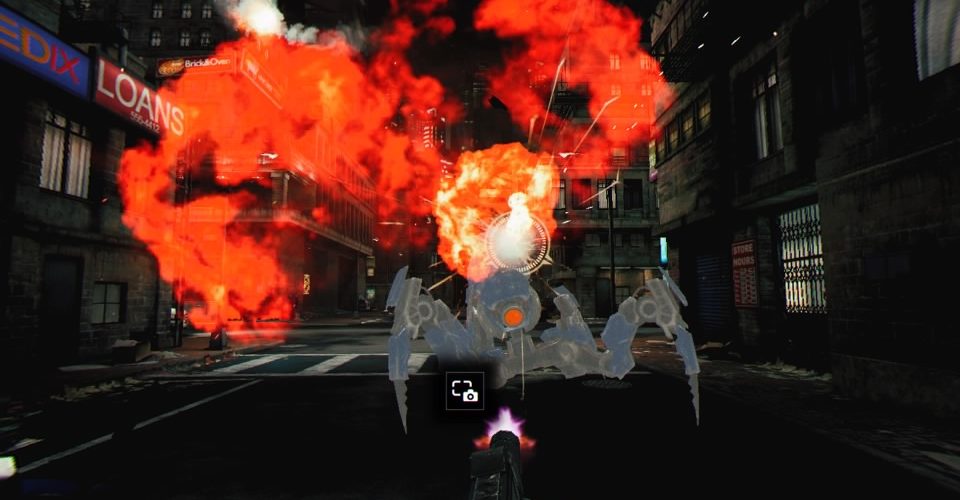 We’re two years into the life-cycle of Sony’s PSVR system and here at PlayStation Country we’ve reviewed a lot of games for it which makes us feel as though the hardware is being supported.  However, the big knock on PSVR is that the games aren’t as fully fleshed-out as they should be and that’s fair enough.  It does seem like the majority of PSVR games come in just a few flavours:  puzzle games, horror games, space games and shooters.  Aside from games like Farpoint and Arizona Sunshine, the majority of those shooters limit your motion, making them either turret games or on-rails ones.

Drone Striker, from Taiwanese RPG specialists UserJoy Technology, is one of the latter.  Set during a near-future robot uprising, this game has you moving through the game’s three levels shooting at mechanical enemies and when it comes to the basic shooting, it feels much like any light gun game from the ’90s albeit without the ability to take cover like you had in games such as Time Crisis. 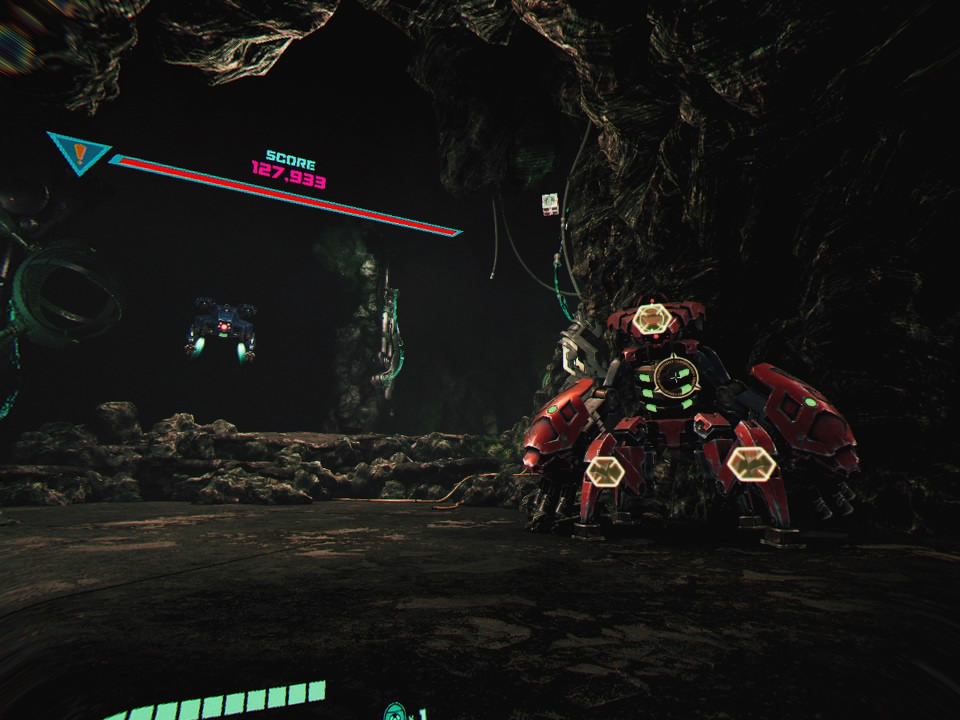 However, if you take your finger off of the trigger and sweep your aim through enemies, you’ll lock onto them Rez or Panzer Dragoon-style and will fire off missiles at them.  This is a great mechanic as it allows you to fire and forget while concentrating on bigger threats.

The enemies don’t vary much.  You’ve got ground and air based ones, some of which can be dispatched in one shot where as others take a lot more effort to put down.   Bosses close out each level too and these have patterns that you’ll need to figure out.  When an enemy emerges, you have a few seconds before they attack you.  Some will directly laser you in the face but most will fire off missiles or other projectiles that you can destroy if you can target them quickly enough.  If you do get killed, you get two continues but a level select in the menu lets you jump to whatever level you want anyway.  That said, you may not want to do that as each level is littered with power-ups that increase your max health, firing speed and the number of missiles you can fire and so you may want to build your way up. 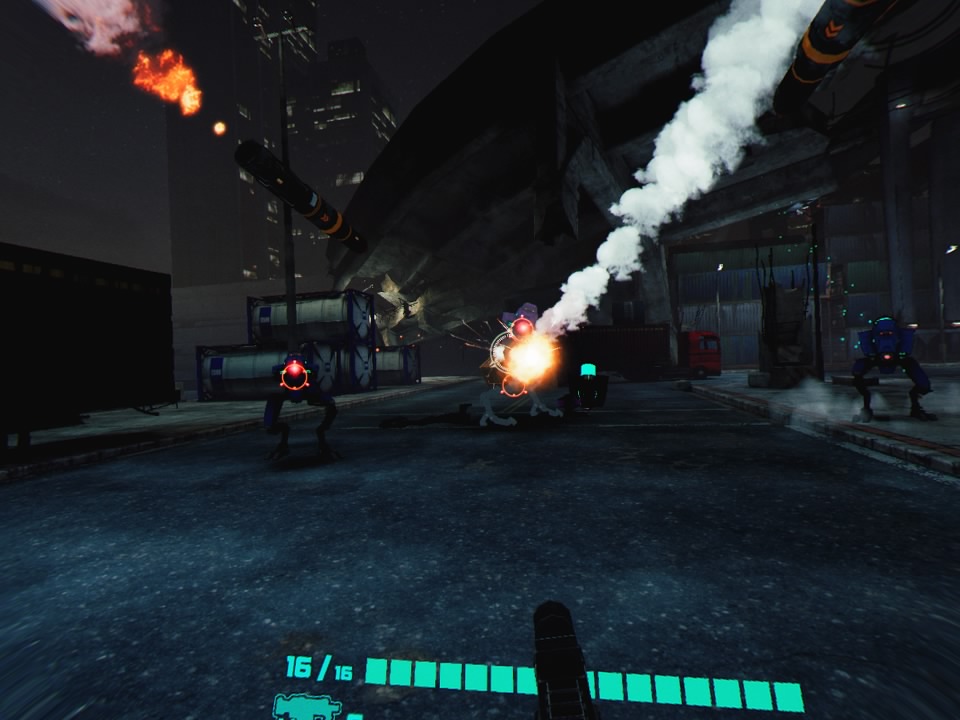 There’s not a lot of game here though.  The three levels on offer – tunnel, harbor and city – are all pretty short, clocking in at around twenty minutes each and then you’re done.  Also, everything is a little samey visually with it all having a gritty, Terminator vibe to it.  There are some attempts at destruction but not many so the game ends up not feeling particularly dynamic.

Drone Striker is very playable though and it supports Move, DualShock and Aim controllers.  Obviously the latter is the way to go and it does feel good to use but you won’t struggle for accuracy with the others and when you’re ambushed by a dozen enemies all firing off rockets at you the game does start to get enjoyable.

The game looks okay.  This is definitely an indie game but everything holds together well and while it’s all a bit dark and moody, you can always see what’s happening.  The VR doesn’t add a whole lot but you are often surrounded (in a 180 degree fashion) so it’s good to be able to look around and you’ll often see power-up crates in the distance that you’ll need to pick off. 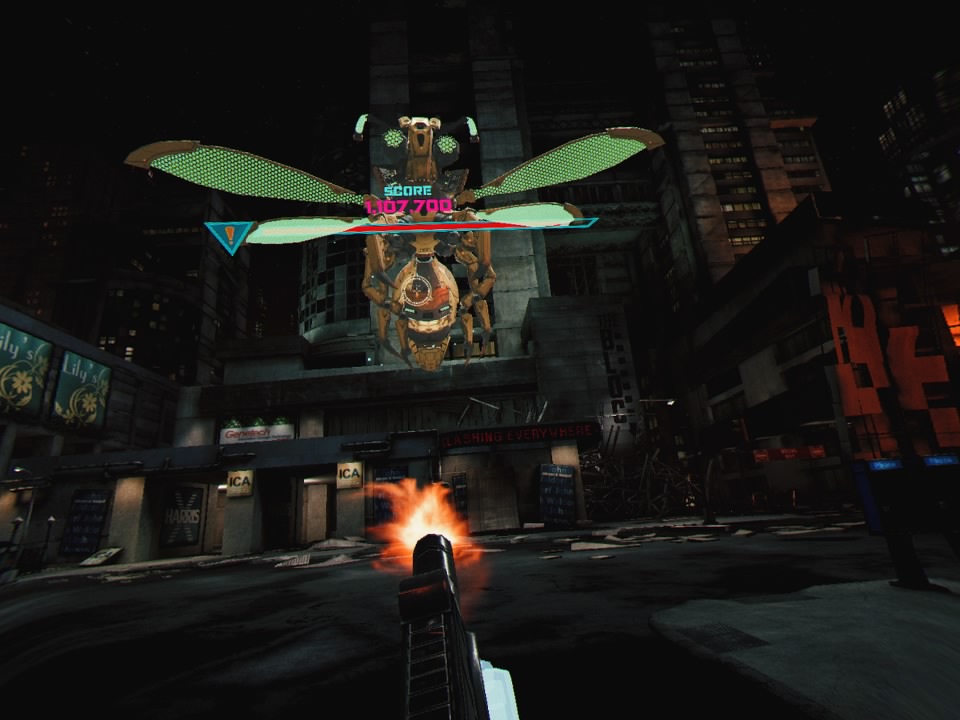 We recently reviewed a game called Time Carnage which had a very similar feel to this, at least in its future-based levels and where that game got a six from us (perhaps a little underscored that one), it did a lot more than Drone Striker does, from it’s excellent weapon-switching mechanic to its upgrades and varied enemy types.  So that might be the game to go for if you’re looking for a cheap VR shooter but if you want another game to play with your Aim controller (and we get it, it’s massively under-supported), this will do.

There’s nothing that Drone Striker does exceptionally, but nothing it does badly too and it’s absolutely fine for a cheap and cheerful arcade light-gun style blast.  Just don’t go in expecting to be wowed in any way or see anything that other shooters haven’t done before and better.

Summary
Drone Striker is the kind of on-rails shooter that you can enjoy without having to use too much brain power but this is a title that you can happily buy or ignore and neither is the wrong decision.