No Pest Productions came to our attention with A Bastard’s Tale. Their tricky debut placed an emphasis on skill and deliberateness but a steep challenge and a short experience left Gareth feeling down on it. Driven Out is hoping to offer something meatier with an appealing art style and a lengthier adventure. It’s clear the guys over there are trying a specific niche but does this second effort deliver? 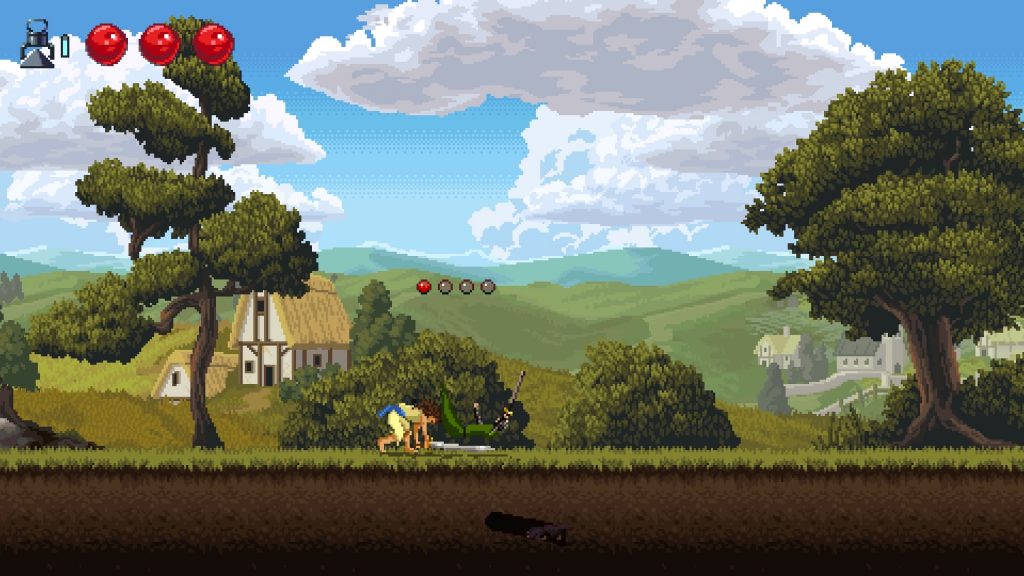 Mechanically, Driven Out operates in much the same vein as its predecessor. You engage in very deliberate combat across a two-dimensional plane. You have high, low and medium attacks at your disposal which all have lengthy animations. Enemies operate in the same way with their own tells indicating where the next strike might be coming from. Defensively, you can block high, low and medium to counter any hits. Timing a block results in a parry which can be used to gain some spacing or precious time to secure some much needed damage.

It feels somewhat passive as you wait for opportunities, look to back off and I almost liken it to fighting a series of traffic lights. There’s a rhythm to it and there’s a certain satisfaction that accompanies success. This is partly down to odds being firmly against you. Your humble villager isn’t very robust. She can take three hits before expiring. You feel like a perennial underdog as the enemies tend to dwarf you in size, quickness and resilience. It can lead to frustration but mastering the combat is strangely enticing. 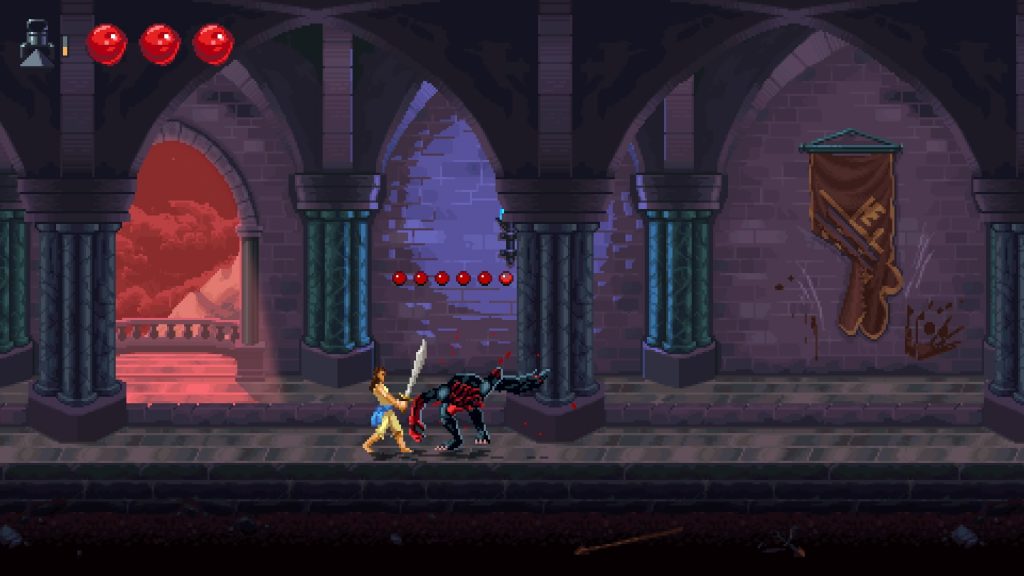 For the most part, enemies are consistent in their approach and you can ultimately figure out what’s intended to defeat them. Some are susceptible to parries whilst some offer limited range. Discovering the chances you need to take, and how to create them, becomes a puzzle in itself. There’s also a large variety in enemy design. Each area has a specific motif with a handful of enemies to battle. They tend to follow a theme so you can occasionally take knowledge from a previous foe into account. It tests your memory and dexterity well but there’s definitely a couple of adversaries that have worryingly short or similar tells. I find the deer to be particularly troublesome with their headbutt looking too similar to their mule kick. Deciphering those under pressure can lead to some unnecessary deaths.

Death does come often in Driven Out. As mentioned, you only get three pips of health with these only being replenished by success against a boss or regenerating at a portable contraption. These are handy if you wish to camp out near a tricky nemesis. It’s effectively a manual save point which can also act as a temporary distraction. Enemies are drawn to it like a decoy which can allow for some sneaky hits but can also lead to the machine being demolished. You can deploy these as long as your energy bar allows it. You can place three reliably which, given the size of each area, is adequate. Just be careful where you set them down. Enemies can pincer you although there’s an odd passivity to them if you keep moving. 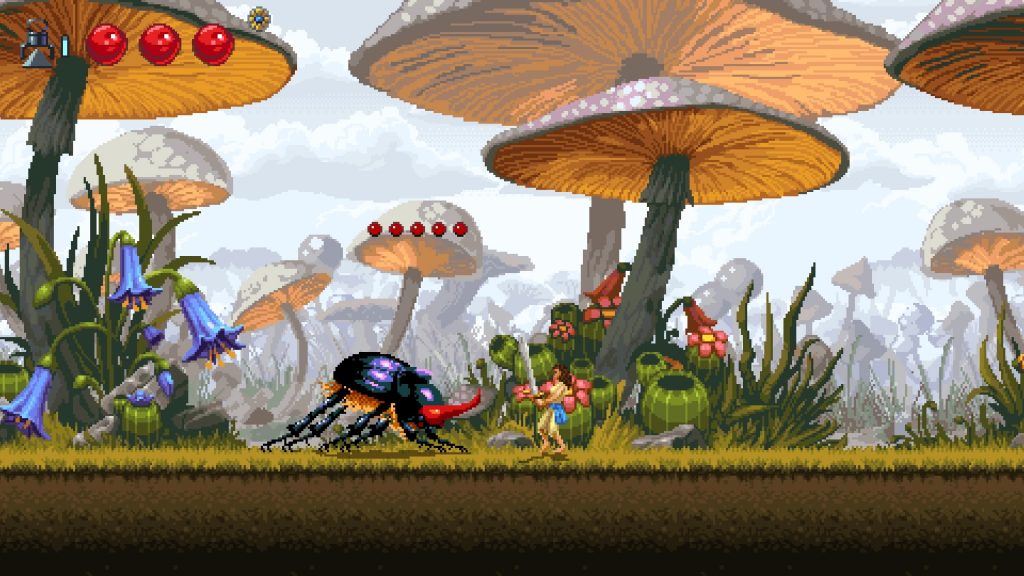 Driven Out‘s pixel art really shines. Areas are varied with some rather wonderful, detailed backdrops setting the scene. They’re colourful and do tend to dominate the screen with some lovely moving parts. No Pest Productions have really managed to create a cohesive world that’s great to look at. Each zone comes with a unique soundtrack which, whilst decent, doesn’t provide a lot of bombast or intimidation. The best sound tends to come from combat. Parrying comes with a rather meaty clash of metal and a blue flourish. It helps generate good feedback. Our protagonist also animates appropriately. She is clearly a novice and her strikes are laboured. Running takes a second to come to a complete halt and, like the combat, there’s a deliberate pace to movement.

There’s been a lot of thought put into this which is arguably why I’m more disappointed in my overall impressions of the game. It is a very steep challenge and it’s one I never really felt confident with. Areas might be short but, when death can come so quickly, it can really stifle any momentum. I stuttered my way through this journey and it came something of a slow crawl. 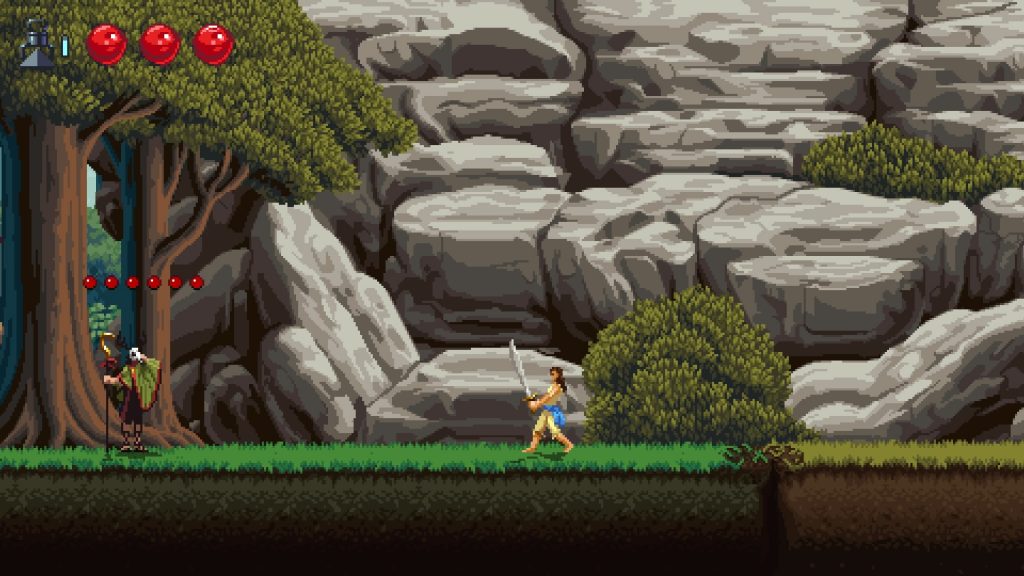 I recognise a lot of that is on me but there’s definitely moments where the windows for success are too tight for comfort. Positioning can lead to sometimes being outnumbered and, whilst it’s never quite unfair, it does feel like a game that rewards the utmost care and persistence. The lack of any real story and progression meant motivation came from seeing what was around the next corner. Presentation is also fairly bare. New players don’t get any tips or advice at any time so it’s up to you to be observant. A little bit of guidance would be nice, even if this game does show it’s hand very early.

Honestly, I’m not sure how to feel about Driven Out. It’s a more refined and polished effort with some fantastic art and enemy design on display. Unfortunately, my own shortcomings lead me to find a game that is hard to penetrate or gain a foothold in. Players that find appeal in something skill-based and deliberate shouldn’t shy away from this. Just be prepared trial and error.

Driven Out
6 Overall
Pros
+ Fantastic, detailed artwork.
+ Varied enemy design.
+ Combat is rewarding and challenging.
Cons
- Some enemy tells are difficult to decipher.
- Very trial and error gameplay.
- Almost no narrative pull.
Summary
I can't fault No Pest Productions for trying with Driven Out. It's a very harsh and deliberate test beneath a gorgeous world. I some ways it's refined and delivers consistent combat with a varied cast of enemies. Sadly, I couldn't find a foothold. Amid the frustration, there is reward but you really, really have to work for it. A touch more guidance would've been nice and, once it's done, you realise how short the experience can be. Still, I wouldn't dissuade anyone from giving it a look. Just know what you're getting into.