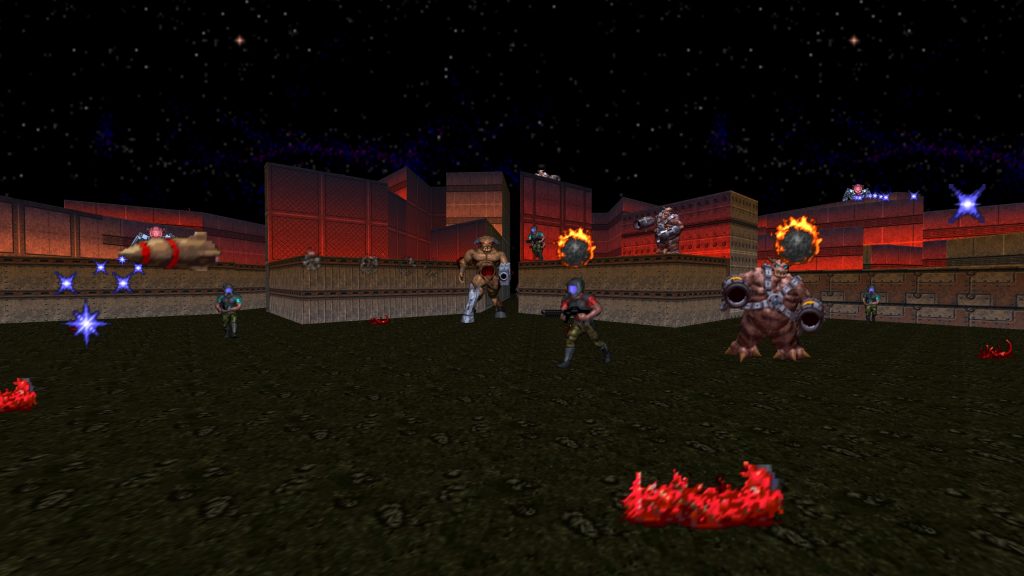 The sweeping introductory cinematic was bloody impressive back in 97.

Being a PlayStation site, there is an air of blasphemy that comes from mentioning a rival platform on here. But, while I spent a good portion of my youth nailing manuals in THPS or enjoying the pre rendered locales of Raccoon city on my PS1, first and foremost my main machine of the era was the N64. Now before you start throwing tomatoes or a drafted essay about the joys of CD gameplay at me, there were some clear benefits of owning Nintendo’s third console. We had the best platformers in game, some of the finest exclusives of all time and of course, Goldeneye. It was the first time we had a truly great console based FPS, with groundbreaking visuals, speedy gameplay and multiplayer, which for the time was incredibly rare for a console FPS. With the advent of 3D technology becoming widely adopted. When it was the N64’s time for the customary Doom instalment, things had to change. The SNES and just about every console at the time already had a serviceable port of Doom and with Rareware showing up everything that came before, it would be a gargantuan task for any 2D shooter of its type to measure up.

Doom 64 seems to be more important to the franchise than it first appeared. It was a fully fledged sequel and the true Doom 3, rather than yet another port of the original Mars adventure. While story isn’t really what you sign up for with Doom, it takes place straight after the Final Doom expansion, with a new threat in the form of The Mother of Demons, a matriarchal entity that is resurrecting the demons that have already been turned into mulch by the Doom Marine. It’s his job to make them die again, you don’t need much more than that for a nostalgic dip into Doom, but back in 1997 with the advent of more involved game storylines, this wasn’t enough and something that could cast your game into obscurity. Doom 64 released mere months before the Bond shaped juggernaut came out and as quickly as it came, it was forgotten in favour of the new hotness. A damned shame, as while Doom 64 may have seemed dated and old, it managed to keep some of the charm while introducing a brand new story, updated graphics that bettered the PC version (remember, this was 1997) a cavalcade of creatures and weapons not seen before with some fancy 3D thrown in to mix things up. 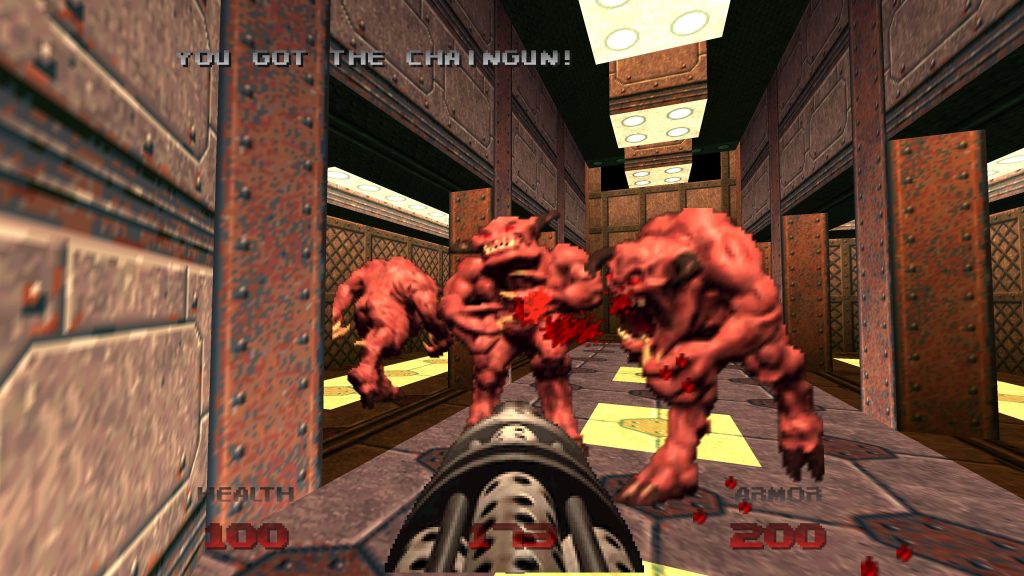 Nintendo may have been known for happy adventures about collecting and having feelings. But Doom 64 doesn’t scrimp on the gory detail.

For me, Doom 64 was a rental. I caught on to it after playing Goldeneye so it was never going to impress, but the allure of a gory shooter with the series pedigree was enough to get some gameplay out of it. I got far enough in the game, but at the time it seemed unremarkable, with the D-Pad controls getting in the way of a good time. Zooming forward around twenty years, imagine my surprise when I sat down to play this age old N64 exclusive on a PlayStation console. So what makes Doom 64 feel newer than the previous editions at the time? For starters, there was whole new processes brought in to change up the very look and style of the game. At the time, Midway Games were at the helm, with Id Software supervising over the development. Being Midway, it made sense that they wanted to use some of those digitised modelling that made Mortal Kombat and Pitfighter so appealing. So instead of traditional sprites, characters were made physically with models and later photographed and imported into the game. This presented a new challenge, with the models taking on a more ‘realistic’ look, the darker, more grounded appearance of the demons would have been at odds with the day glow look of the original Doom outings. As such, just about every aspect of Doom 64 has a gothic and muddy look to it. It seems like heresy, changing up Doom in this way would be scoffed at these days. However, back in 1997 this was considered a good change and showed the N64 as being capable of beating the PC for being a graphical powerhouse.

There was just one major caveat though, it was dark, too dark. The majority of the game takes place in overcast shadow and back on a CRT, if you had any sunlight on your screen then you weren’t seeing anything. Thankfully, in this remaster the lights have been turned on, with the visuals being far easier to read and react to. The controls have thankfully also received an overhaul. Thanks to the advent of twin stick control, Bethesda have implemented the scheme from the recent Doom ports, making strafing a doddle and the gameplay as nippy as possible. For anyone that remembers the N64, this was hardly the strong suit of the console and to have agency like this turns Doom 64 into an absolute joy to play. It boggles my mind thinking of how the game could have even been playable before, as the new setup feels exactly how it should have always been, because Doom 64 is one of the toughest of the series. Connecting blows from demons sap your energy within seconds and if your progress is halted midway during a level then you’re sent right back to beginning, if you forget to save of course. Couple this with scarce ammo and the aforementioned dark atmosphere, Doom 64 begins to look and feel like more of a survival horror title than a typical twitch shooter. 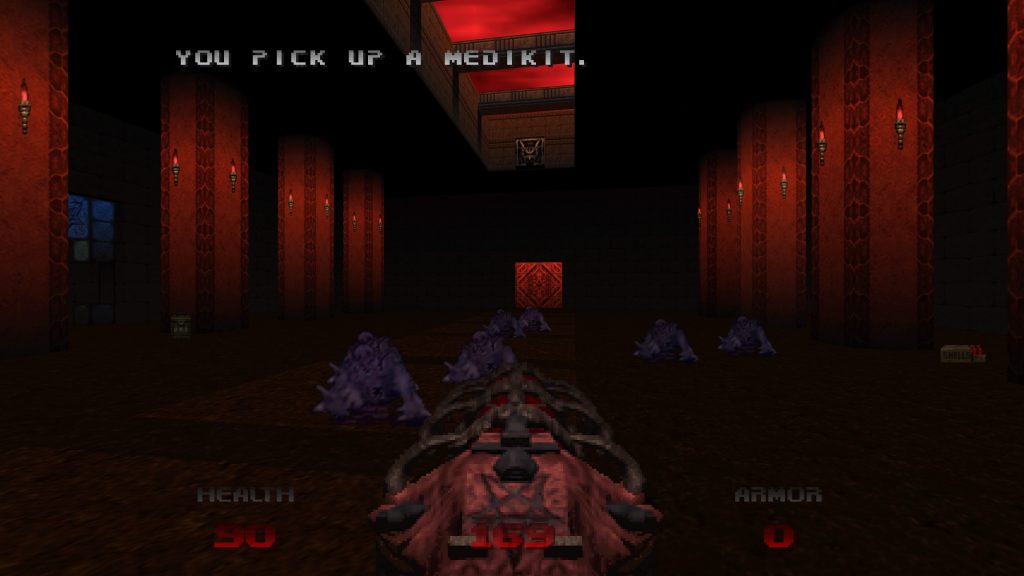 By far the darkest game in the franchise, which brings with it a unique mood of horror as opposed to direct and constant action.

It gets pretty frustrating too, with some levels such as mission 6 with its winding corridors of heavy hitting demons and dwindling health pools becoming an exercise in patience. Having to reload a save after your twentieth erroneous step, finding out that you have to retread through that earlier gauntlet is downright annoying and a relic of gaming past that most won’t have missed. This is especially made worse when you learn that Doom 64 LOVES to dick you over, so much so that you will learn never to trust that weapon or armour pickup for how it looks. One such occasion sees a full armour pickup in the middle of a room, run over to it and the ground gives way, dropping you into a pit of lava which gradually ticks health away from the player rather than instant kills so it can truly twist that knife of punishment further. These dickish moments come from the altered Id tech engine, this was the first Doom to have been scripted in this way, that allowed for level shifts that came as a result of triggers, making traps and dynamic level elements possible. It sounds so odd when putting it this way, as if it is something new and I suppose it was considering.

Overall though, I like the focus on horror more for this entry. The enemies in Doom have always had their own flavour of threat to them, but in Doom 64, they seem particularly scary, thanks in no small part to the soundtrack. The audio will seem jarring to those who grew up listening to the midi renditions of heavy metal from previous games as Doom 64 takes a more ambient tone, with little more than the hum of technology, the heavy clunks of doors as they close behind and the snarls of enemies nearby waiting to ruin your day. Its surprisingly effective, especially when you sense something nearby and are about to press the big green button that will no doubt unleash whatever makes the grunt sound. It actually makes it worthwhile to learn each Demon’s patter, so you are ready with the right weapon and can turn the odds into your favour. 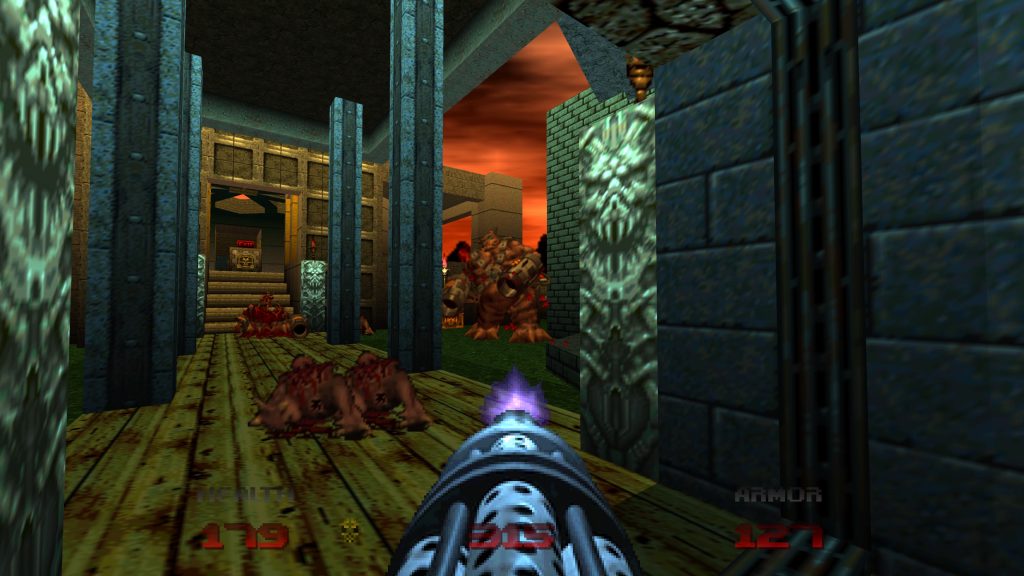 The early 3D lanscapes added a new sense of scale which was rarely achieved by the psuedo 3D that came before.

Beyond that, Doom 64 follows the age old template of the series. You still collect coloured keys, you still shoot a lot of demons and you still have a good time doing so. Doom 64 may not have been the best choice for a remaster, but it certainly is an interesting one and a much better game now as a result of the hindsight. The most remarkable thing is that Id have brought it back for more people to discover it, while also adding an extra chapter of content for Doom lore heads to sink their teeth into. For less than the price of a Big Mac meal, it’s well worth the try, if only just to ease that transition from the bombast of Doom II to entries that followed in its blood-soaked wake.


Doom 64
7 Overall
Pros
+ Renovated controls, Doom 64 never played as well
+ The survival horror angle is an interesting change of pace
+ Great use of audio
Cons
- Very frustrating in places, with some instant deaths as a result
- Can be hard to find your way around
- Some monsters missing from other Doom games due to N64 hardware limits
- Lost Souls are particularly more aggressive and annoying this time.
Summary
While the original release in 1997 didn't quite live up to the 'classic' status that the Doom franchise is renowned for, the creative sparks that made it a unique entry are still very prevalent to this day. This is helped by a miraculous port that renovates the visuals, controls and speed of the ageing N64 edition. The only thing that Bethesda or Id Software couldn't help, is that the game is quite frustrating at times. Doom 64 is still one to play, if not just for the sake of more Doom, but also because it remains a true continuation to the series that make a commendable attempt at pushing the series into horror.