When I first downloaded Dogurai I wasn’t sure what to expect, but the name actually tells you quite a bit, at least about the character you play as. You play as a samurai who is also a dog. One of the those ‘Ooooh’ moments you get when playing games, but it’s not usually about the title. 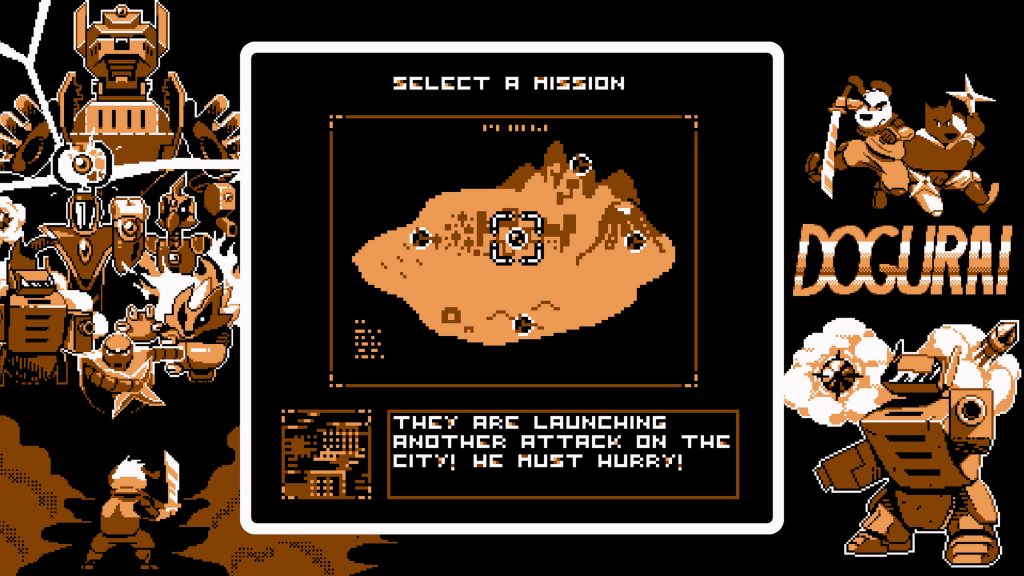 The dog samurai is called Bones and he must rescue his friend from robot masters for some reason. There isn’t too much focus on story here, a quick look at the images on this page might give you a good idea why. This is trying to replicate a Game Boy game, from visuals to music to gameplay.

There are eight levels to play through, after the first you get to choose which order you tackle the next four in and then there are three more. Although there are plenty of nods to Mega Man you don’t actually gain anything from defeating the robot masters so the order you do levels in doesn’t really matter. The bosses do have a few different attacks to learn and dodge though which is very Mega Manesque. 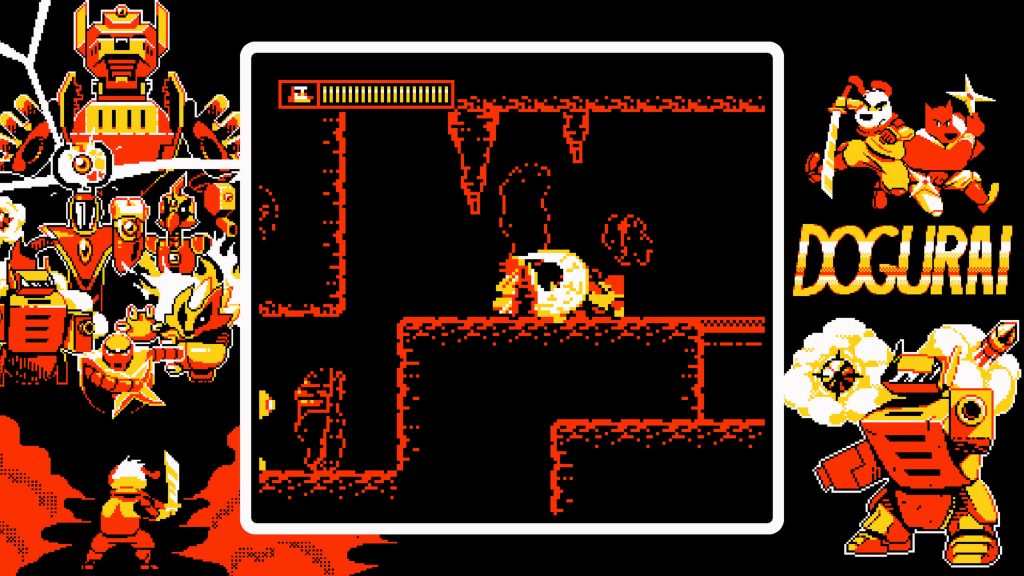 There isn’t any explanation when you start playing but thankfully things are pretty straightforward. As a samurai you have a sword that you can slash, you can double jump from the off and you can also slide. The range on the sword is quite short but you can slash bullets so getting up to most enemies isn’t a problem if you get the timing down. Certain enemies will enter a stunned state at points allowing you to perform multiple slashes through a QTE. You have a health bar so you can afford to take some hits before you perish and on normal difficulty you have infinite lives and will respawn at a checkpoint. Hard gives you six lives, if you lose them all then you have to start the level from scratch but you can find extras in the levels.

In fact Dogurai likes hiding things throughout its levels. As well as platforming and defeating enemies there’ll be secret walls and diverging paths for you to check out for health, Easter eggs or hidden disks which are required for the good ending. They’re not too complicated to find and you can replay the four main missions as long as you don’t advance too far and the levels, and game itself, aren’t too long. This is good for replayability as the trophies encourage you to try the two difficulties and you can unlock a second character to play as too. They are the same apart from their weapon which does actually change the game a decent amount and was actually a more fun character to play as to me. 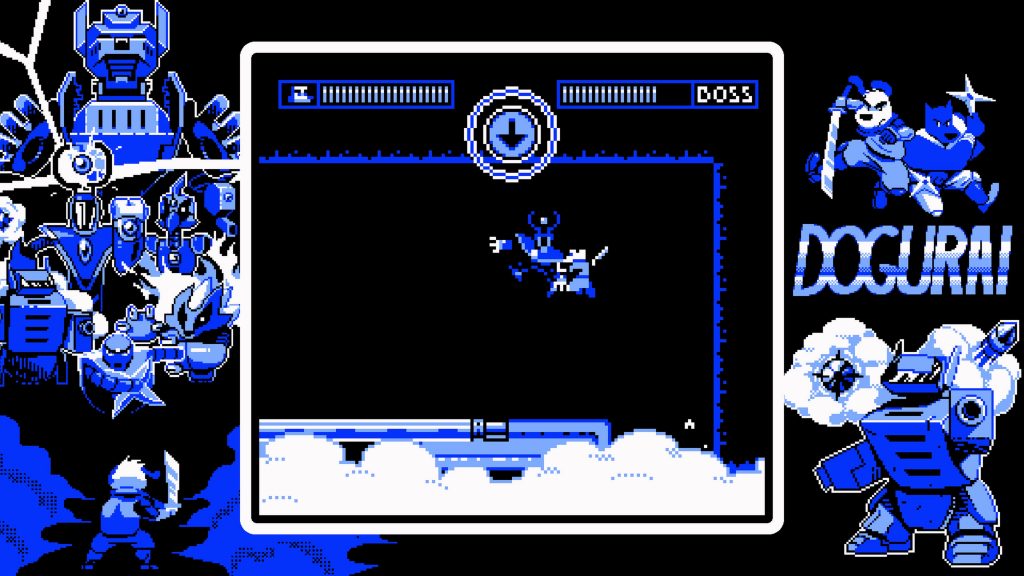 The Game Boy influence is obvious, the visuals being both low tech and based around one colour at a time. By default each level has a colour scheme but you can choose to stick to one in the options if you so wish. Although in the images it might be tough to see what’s happening I have to say in motion I rarely ran into trouble with the visuals. I have no nostalgia for this type of style but it’s done well here. The sound is similarly lo-fi, the problem being when you have so little to work with it has to be amazing to stand out. Here it’s inoffensive but none of the tunes are going to be getting stuck in my head any time soon.

The controls also have an old game feel. That is they’re not as responsive as I’d expect a modern game to feel. Again that’s what they’ve gone for and it isn’t to the detriment of the gameplay once you’ve adapted to the quirks such as not being able to move and attack or mistiming your jump and so using your double jump without realising it. There is a learning curve but it’s not too harsh and the game is generally well designed within these boundaries. 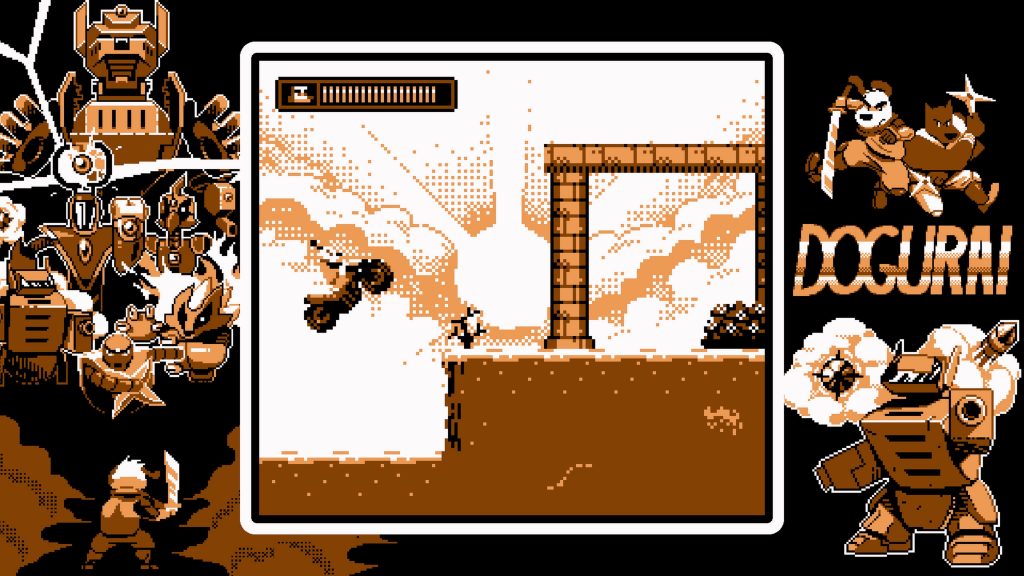 After my initial playthrough I was ready to say Dogurai was fine, a low price shouldn’t scare people off from trying it despite not really being anything special. Then I played through with the second character and the next thing I knew I was playing it again and again. Now I have the platinum. Being short and rather playable has lightened me to the game and those who like action platformers or specifically Mega Man style games should give it a try, it’s cheap enough to not be a particular problem if it turns out it’s not for you.

It’s not going to change your life or carve a prominent place in your memory but what Dogurai goes for it does well. If you’ve got nostalgia for the Game Boy then maybe you’ll even get more out of than I did.

Dogurai
7 Overall
Pros
+ Nails the old school presentation
+ Very replayable
+ Very, very low price
Cons
- Old school style controls can take some getting used to
- Relies heavily on Game Boy nostalgia
- Short length might disappoint some
Summary
Dogurai is inspired by Game Boy action platformers in every way and does a good job of recreating both the presentation and the gameplay. It's short but very replayable and at a low price.

One thought on “Dogurai – PS4 Review”