Distraint is a short but bittersweet 2D adventure game from one man developer Jesse Makkonen which has been ported to the PS4, and Vita, by Ratalaika Games, the Finnish perpetual publishers who we seem to be reviewing every week.  You already know what they are about, quick and easy platinums, cross-play and so on.  Well, stop for a minute because this is them at their most interesting.

The game has you playing as Price, a young man working for three rich bastards.  His job is to evict people from their homes, a job that weighs heavy on his heart and his conscience as he battles between doing what’s right and making his way through his career.  His life starts to unravel when he evicts a sweet, old lady from her home, an act that has him questioning his actions and the effect they are having on his humanity. 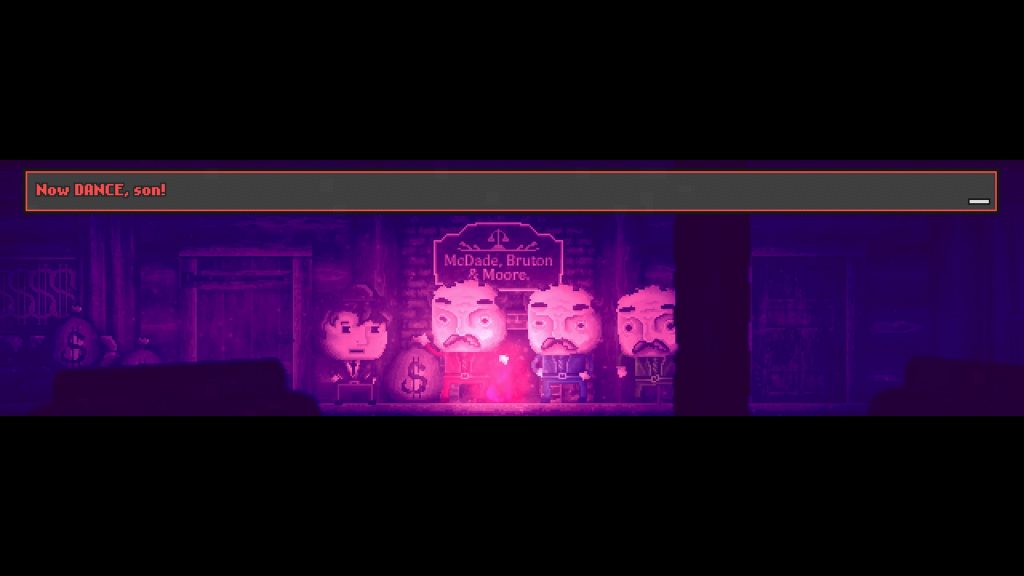 The game plays out as a 2D puzzle adventure game but in a way that hasn’t been popular since the 8-bit days of gaming.  If you’re familiar with the likes of Jack the Nipper, Sceptre of Baghdad or the Magic Knight trilogy, this is one of those kind of games.  For the 95% of our readership who were born in the ’90s or later, these games had you walking around 2D environments picking up objects that you’d then use to get past puzzles.

That’s exactly what you get here.  Usually each puzzle involves you needing an object to get past some kind of obstruction but you’d need to find the object and it is usually hidden behind multiple other puzzles.  For example, one guy needs you to find his dog but his dog won’t follow you unless you have his favourite glove.  And, of course, that is hidden behind a similar puzzle and so on. 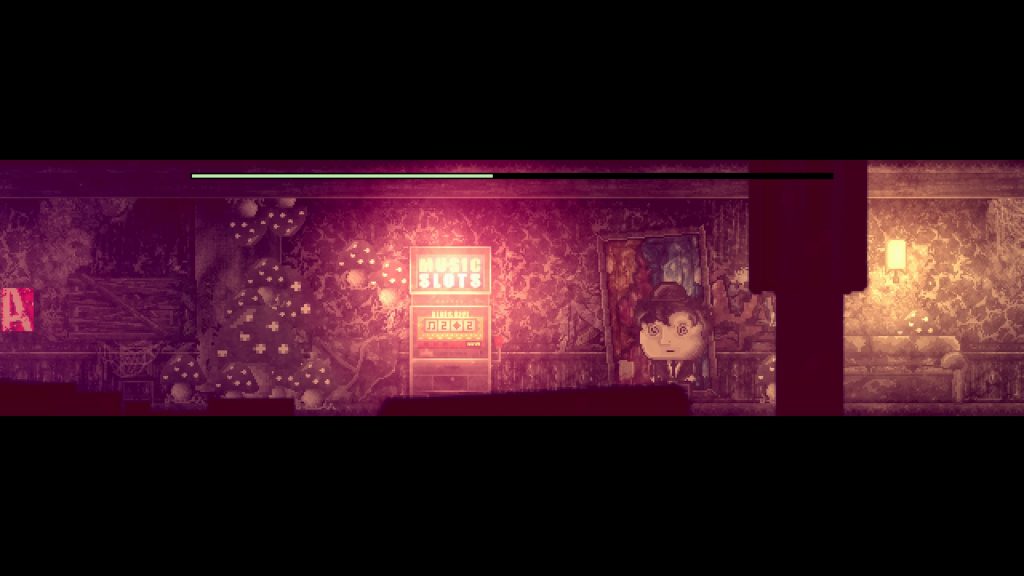 Each area is usually a corridor or room and doors in those rooms lead to more corridors, however with this all being in 2D, it becomes a little harder to visualise in your head but the areas are pretty small and you can usually figure it out even if the puzzle solving sometimes comes down to the trial and error of trying each object at each location when you’ve not got any better ideas.   That said most of the puzzles here are easy to figure out but not so easy that the game is a pushover.

The gameplay is fairly minimal.  You walk, you open your object inventory with

to interact with things (using whatever object you have prioritised).  That’s it.  No running, no jumping, no fighting.  Nothing but puzzles and that’s fine.  It suits the sombre, and scary, tone of the game and we appreciated it even if it is all a bit ‘indie game about feelings’ which is something we usually hate.  But you’d be forgiven for remembering something like Braid that had the story chops but also amazing puzzles and then thinking that Distraint is coasting a little and certainly there isn’t any sense that the puzzles here are particularly innovative. 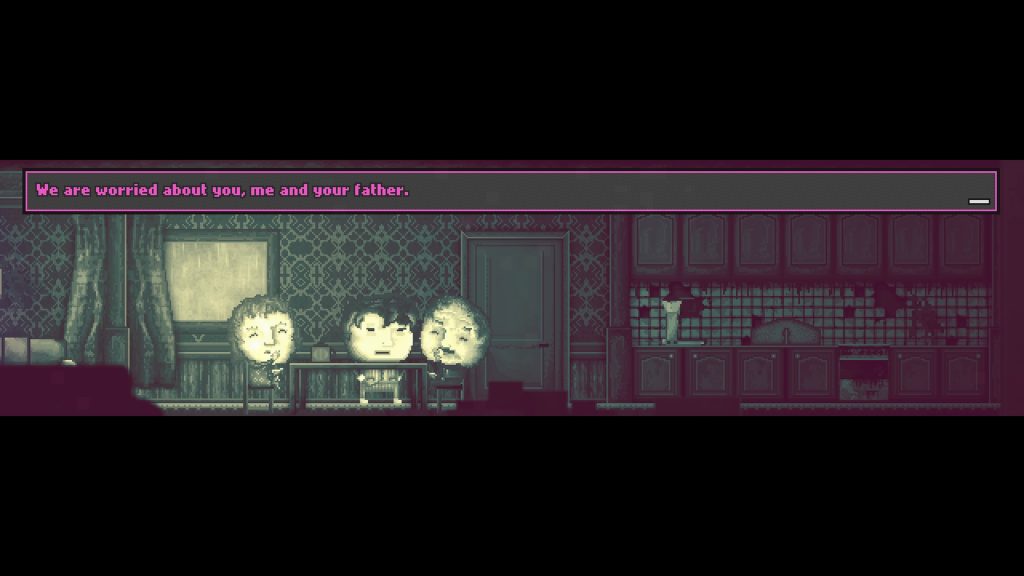 The oppressive atmosphere of the game is pretty impressive given the simplistic visual style.  Everything is presented as an animation, but the sort of animation you’d expect to be a prize winning one about misery in Poland or something.  While it’s not going to push the PS4 to its limits, it does look quite nice and is aided by some nice, moody lighting.   Additional moments of psychological horror do startle or just unsettle you, something that is aided by an impressively effective use of sound to either make you jump or make you want to turn of the PS4 and do something nice.

The story itself builds nicely, showing how Price’s job is affecting his mental health in a way that we’ve not seen done this effectively in a while.  This all comes to a very satisfying conclusion which we won’t talk about but let’s just say it’s good to see a Ratalaika game end as strongly as this, and we were almost relieved to find that we still had trophies left over.  This isn’t the usual Rata-rinse that we’ve become accustomed to and that’s fitting for a game that has a bit more about it than some of their other output. 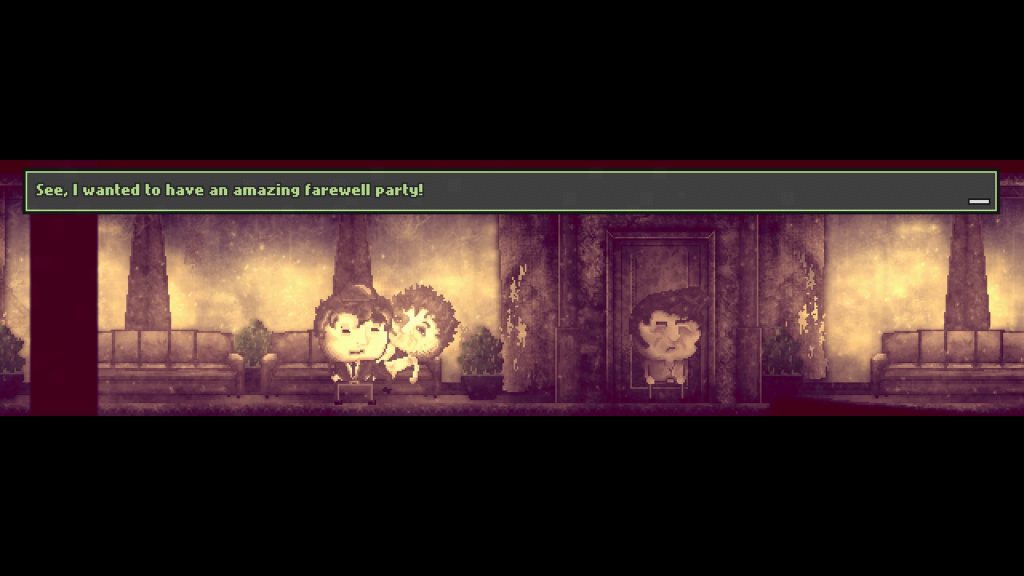 Clocking in at around two hours, this is a game that we beat in one sitting and you might do as well, so don’t expect huge value for money.  It is a cross-buy title, which means you get another reason to blow the dust off of that Vita but this isn’t the sort of game you’ll want to play twice unless you’re a confirmed trophy whore or you leave a big gap between finishing it on one format and starting on the other.  But, you know what?  It’s a game that we’ll remember just like we did with Braid,  not because of the gameplay or puzzles but because the story made us think and that’s entirely what Distraint was designed to do.

Distraint
7 Overall
Pros
+ Effective story
+ Good atmosphere
+ Reasonably good puzzle gameplay
+ Cross-buy
+ Doesn't throw all the trophies at you after 15 minutes
+ Really good use of sound
Cons
- Very short
- Limited gameplay
Summary
Distraint belies its mobile roots by offering up a very memorable story for PS4 and Vita gamers. The gameplay may be simple and the puzzling is a tad generic but we'll remember this game for a little longer than the usual 'indie game about feelings' stuff that indie devs like to put out all the time.