Over the past year, this job’s given me the opportunity to dive deep into Asian horror. A genre that offers it’s own set of trappings, the Eastern flavour seems to focus more on psychology rather than gore and relentless pressure. Red Candle Games offered up their own attempt last year with the Steam release of Detention. Now a Playstation 4 version has arrived, can the terror continue to fright? 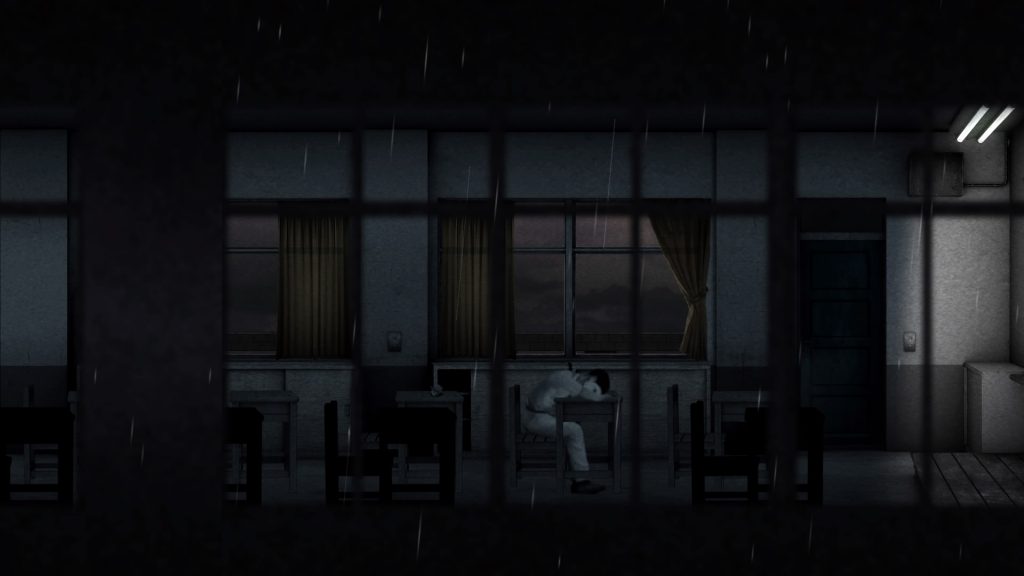 Detention begins traditionally enough with the introduction of the prologue being echoed previously by The Coma and White Day: A Labyrinth Called School. I was anticipating this to stay on the same track. Thankfully, that fades away quickly. What replaces it is as more personal story centring around our protagonist, Ray. She’s a student with a complicated home and school life and how it’s presented is Detention’s strongest card. The political backdrop of Taiwan’s troubled relationship with China adds further nuance and the story, whilst short, has some depth which is surprising to encounter.

Taking place during Taiwan’s White Terror period of prolonged martial law, the historical elements deliver an ever-present backdrop. The real horrors of the period are placed alongside the fictional very well. Themes of guilt and betrayal play their part and the setting gives the story a great sense of place and time. There’s a melting pot of Taoism and Chinese influences creeping in which fits with Taiwan’s complicated ties with their near neighbours. The period, setting and influences combine well to create something very cohesive. 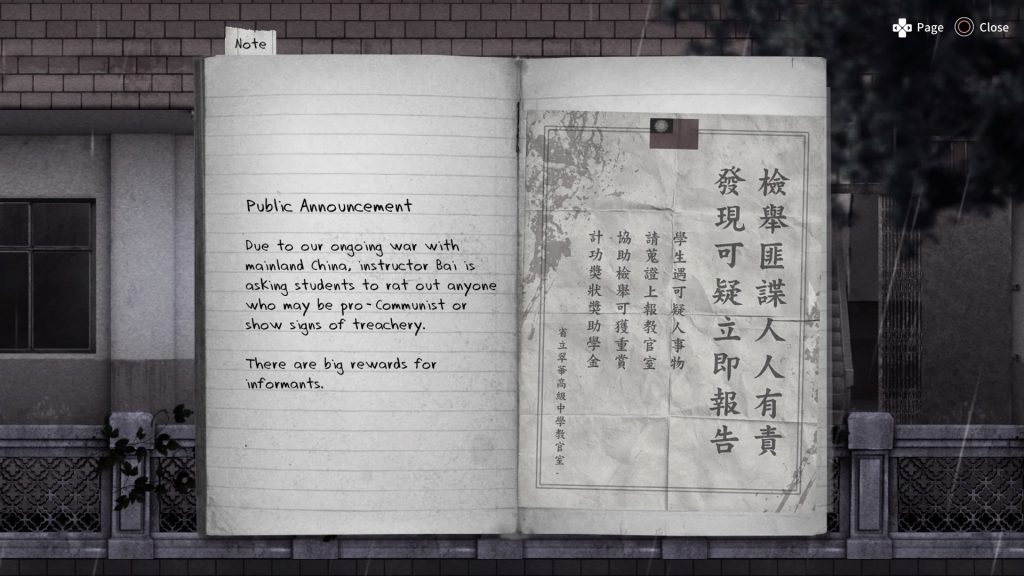 Exploration takes focus as you trawl the halls of the school. You’ll forage for notes and items as you solve Detention‘s various puzzles. None of them appear to be underhand or devious in their solutions and there’s nothing in your inventory that’s deemed superfluous. By the end of the game, everything has it’s use and you won’t be stumped for long. Even if you do feel you’re missing a key item, the areas you’re confined to are small in scale. Whilst backtracking is present, the environments are compact enough for it not to feel like time wasted.

There’s small instances of stealth which help you deal with some of the more demonic presences around you. They’re introduced to you simply with your only means of defence spelled out explicitly. You hold your breath and ultimately sneak past them. Stealth nearly always play a part in these games but Detention manages to abandon it and focus more on the narrative. As a result, the pace begins to quicken. 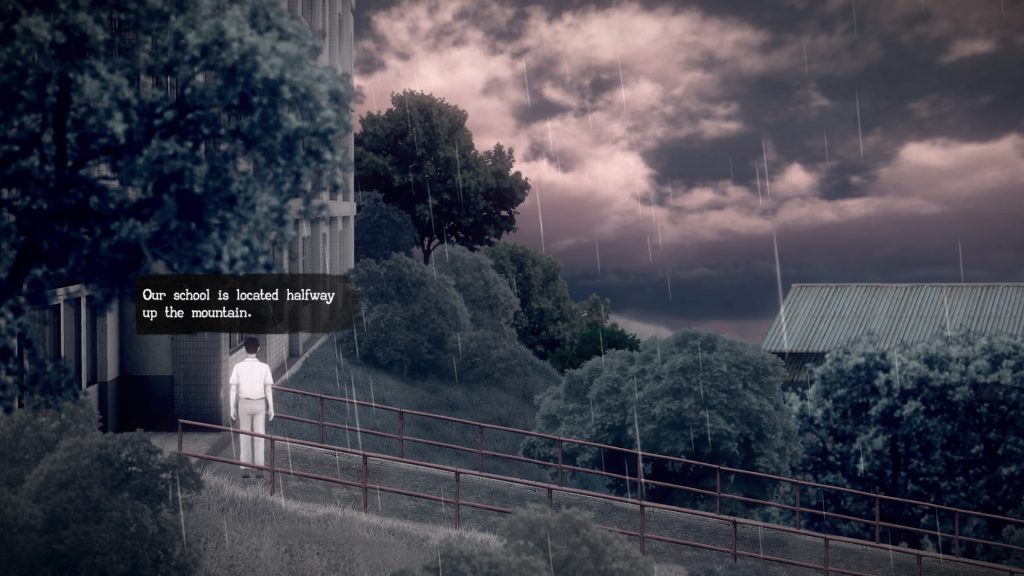 For a game that front-loads some horror elements, there’s not a lot of threat to the player. Being taken by the game’s fleeting monsters takes you back to your last checkpoint. Items you’ve found are kept on your person so you can use failure as a way to quickly warp back to your next objective. The final act does start to lose some of the puzzle and inventory management as you spend more time triggering the next story beat. Whilst it does allow things to keep moving, tension does tend to dissipate and you’re mostly along for the ride.

That’s not to say the ride isn’t enjoyable. There are some powerful, otherworldly moments packed into Detention. They play around with perspective and different planes of existence in some interesting ways and the presentation is visually intriguing. Sometimes it delves into psychedelia and, more often than not, there’s opportunities taken to explore grim imagery and darker themes. It really helps portray Ray’s inner struggles and makes for an engrossing playthrough. A washed out, ghostly appearance helps deliver the surreal overtones, even in the most mundane of places. 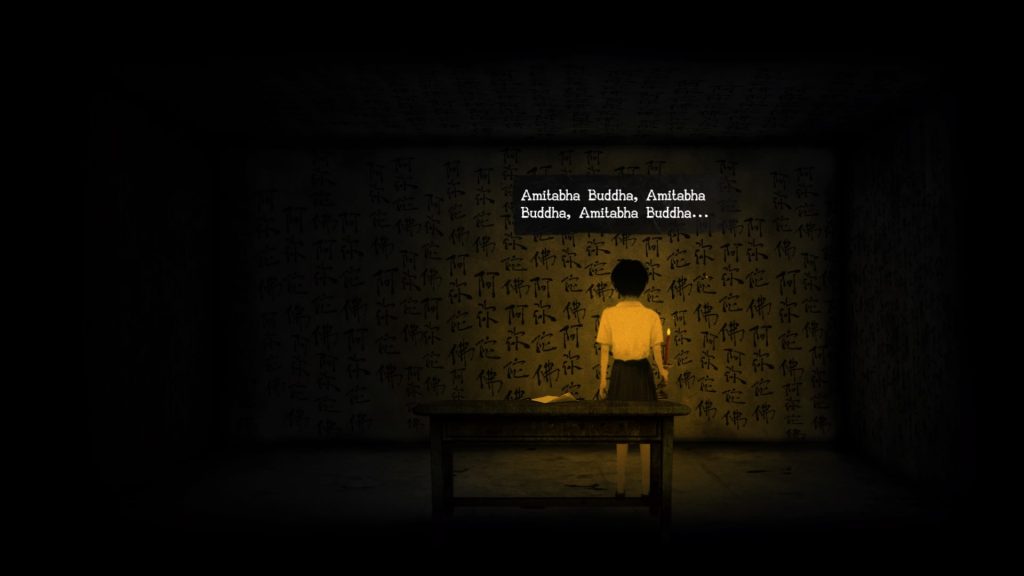 Sound is performed well with ambient noise tracks doing the brunt of the work. It helps portray isolation with a lot of the instrumentation used to oppress and subdue. Whistled ambience rushes through like the wind and helps convey just how abandoned the environments are. Ray uses subtle gasps to inform you of impending danger but I don’t feel the sound design is helped by the game’s lack of failure states. Once you realise you can plod along, any atmosphere the soundtrack could provide is undercut.

The visual treatment really helps propel a compelling, tragic tale along. Whilst the survival horror tag feels a touch superficial, the couple of hours spent traversing the halls and uncovering the world around you remains a strong reason to stay invested. There’s a tight focus on the narrative that’s handled incredibly well.

Detention
8 Overall
Pros
+ Great, subversive visual aesthetics.
+ Atmospheric soundtrack.
+ Intriguing story with a well-utlised historical backdrop
+ Switly paced.
Cons
- Gameplay starts to over-simplify in the final act.
- A lack of failure stifles any attempt at tension.
- Stealth elements are short-lived.
Summary
Detention weaves a fantastic story and wraps it in intriguing aesthetics. The historical setting provide a unique and interesting backdrop and the mix of Asian influences bolster a compelling experience. Whilst there's very little dread, the narrative and the pace at which it's delivered give you plenty of reasons to stay absorbed. This is a well-crafted package that remains memorable, despite a short runtime.