Two years ago we reviewed Riddled Corpses EX, an enjoyable twin-stick shooter with very strong upgrading mechanics by COWCAT games and Demon’s Tier+ is their latest take on the genre but moves it from a post-apocalyptic zombie setting to a more typical dungeon-crawling RPG one.

The game throws quite an unnecessarily large amount of plot at you when you start it up, some nonsense about a mad king that is presented through what feels like endless text screens.  Eventually you get to take the reins during a short tutorial which does next to nothing to explain the game’s mechanics beyond the standard twin-stick moving and aiming.

You eventually end up in a village where there are various people to talk to, shops to enter and a few signposts that offer up a bit more information about how to play.  The aim of the game is to enter the underground levels and get as much loot as possible to power yourself up.  It does this using some very cleverly designed risk vs. reward mechanics that we’ll get into in a moment. 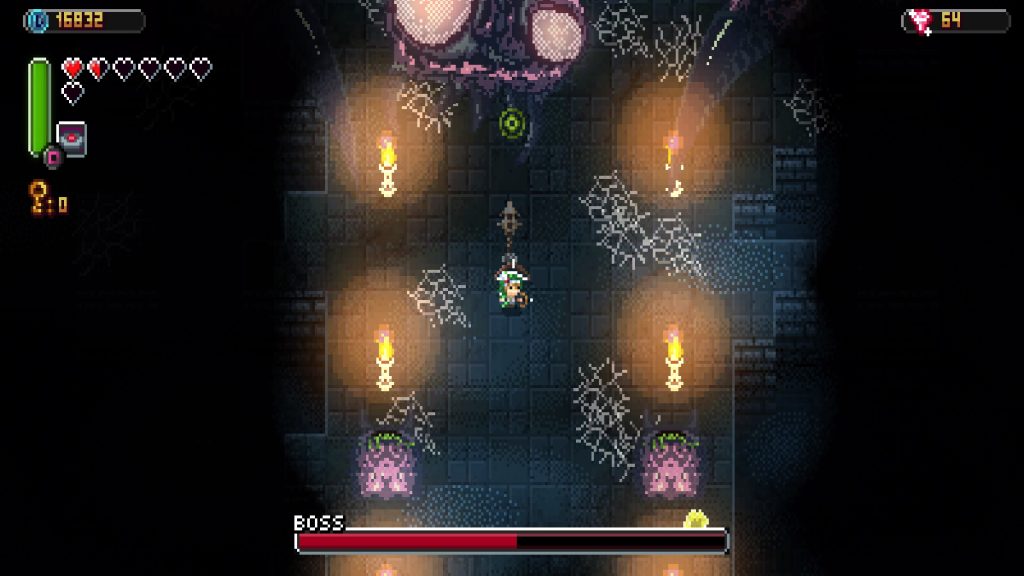 Once you end up in the game properly, that’s where you’ll be figuring things out for yourself.  This is a top-down dungeon crawler and each level is randomly generated.  You start in a random location within each level and your immediate concern is to shoot any monsters in your immediate vicinity while looting as much cash as possible.

We say shoot in the Gauntlet sense of the word.  You’ll be throwing axes, blasting out magic spells or, if you’re using the best character, shooting arrows.  But whatever class you use, you’ll be using projectiles of one sort or another.  Each level has its own objective and these might be to kill all enemies, loot all chests, find a particular key or destroy ‘bombs’ in that stage.  Once you’ve met the objective you’ll need to leave. 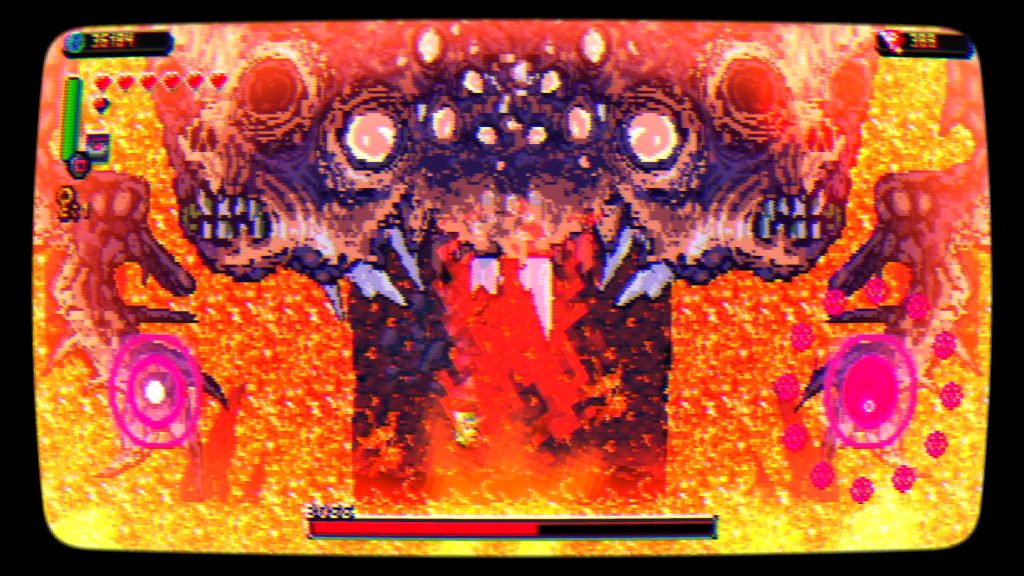 As with all good rogue-likes, you’ll want to exploit each level for its loot before you leave but you do need to be mindful of the five minute timer as when that hits zero a floating ghostly figure called The Reaper will be unleashed.  He can’t be killed but can certainly kill you.

When you finish a level, you get a chance to spend the gold you earned on some useful upgrades to your main stats.  Weapon damage and range, hitpoints, speed and so on can all be upgraded and this will help you later in the game.  Each upgrade gets more and more expensive though and so you’ll need to be choosy about how you spend them as a single run isn’t going to let you upgrade everything.

So far that’s all pretty simple.  Our concern with all games that slap on rogue-like mechanics is that it’s all well and good doing that but the core gameplay mechanic needs to be good too.  In this case, you’d want the basic twin-stick shooting to be good and it is but it’s not great.  The movement feels clunky, the maze-like levels lack character (and often put dangers in your way that you can’t avoid without taking a hit) and the shooting isn’t super satisfying but it’s okay. 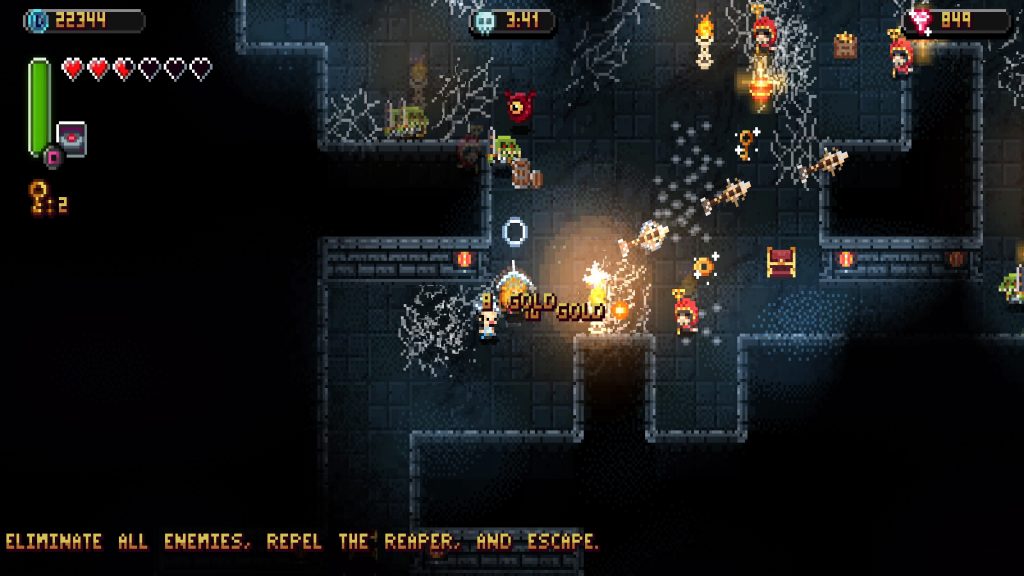 Luckily, there is a whole other aspect to Demon’s Tier+ that really helps to elevate the game and that comes in the form of d-tokens, the other currency in this game.   Where gold is used exclusively in the dungeon and is lost when you die, along with all your upgrades.  These tokens are used to buy things outside of the dungeon that are persistent upgrades.

You use these to buy new character classes and weapons that can then be taken into the dungeon.  You can also buy health potions and magic ropes.  Magic ropes are very interesting because these let you escape the dungeon whenever you want.  When you do that, any tokens you earn come with you.  If you die, you lose them all (although they can be recovered once).

So what you get is a really good risk vs. reward mechanic.  I got to the final level with 50,000 tokens and half a life heart left and made the decision to bail because that was enough to unlock a new character.  Thankfully, you can put your tokens towards something that you can’t afford and it’ll remember that so you can work at unlocking big ticket items over time. 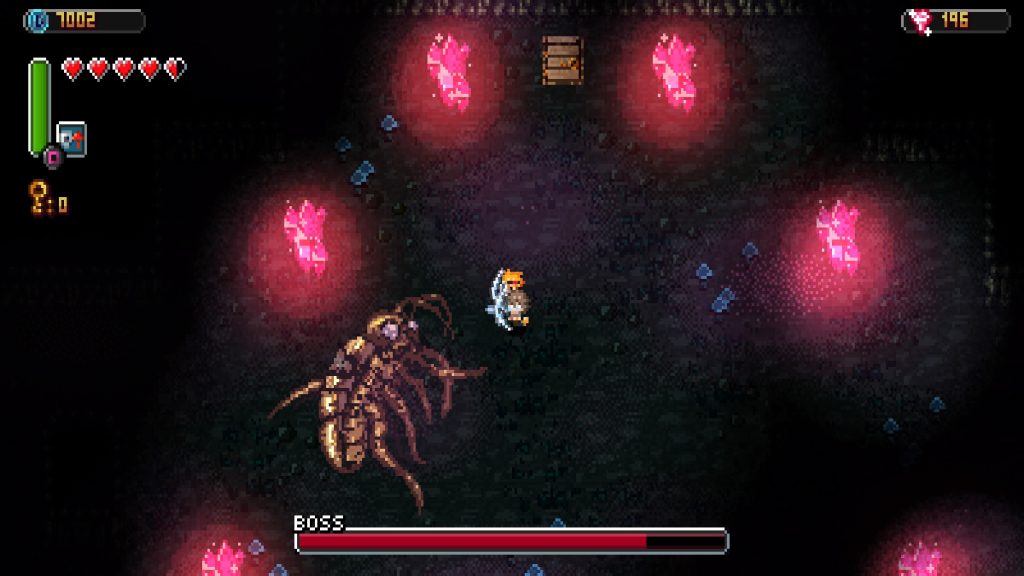 We really like this whole approach and it does really make the game addictive.  Unfortunately we did lose everything a few times thanks to being spawned in the middle of a mob with little to no chance of making it out alive and that’s a shame (and super unnecessary).  The randomness of the levels doesn’t improve anything and some of the levels are a little unclear visually at times, especially the hell level, which speaks to a lack of playtesting.  As do some of the traps in the game that can be very hard to spot but very easy to step into in the heat of battle.

One issue we have with the progression in this game is that, much like Riddled Corpses, at its most difficult, Demon’s Tier+ really needs you to be fully powered up.  At that point the progression all feels like it was delaying you and padding out time before the main challenge begins.  By that we mean that if this game was just a straight arcade shooter with no upgrading and it was just you taking on the hardest tier of the game with the best upgrades already installed, we’re not sure it would be all that compelling.  The value here is in the upgrading but ultimately that feels a little pointless as you can never upgrade so far that you become godlike so really you’re just building yourself up to being able to complete the game (if that makes sense). 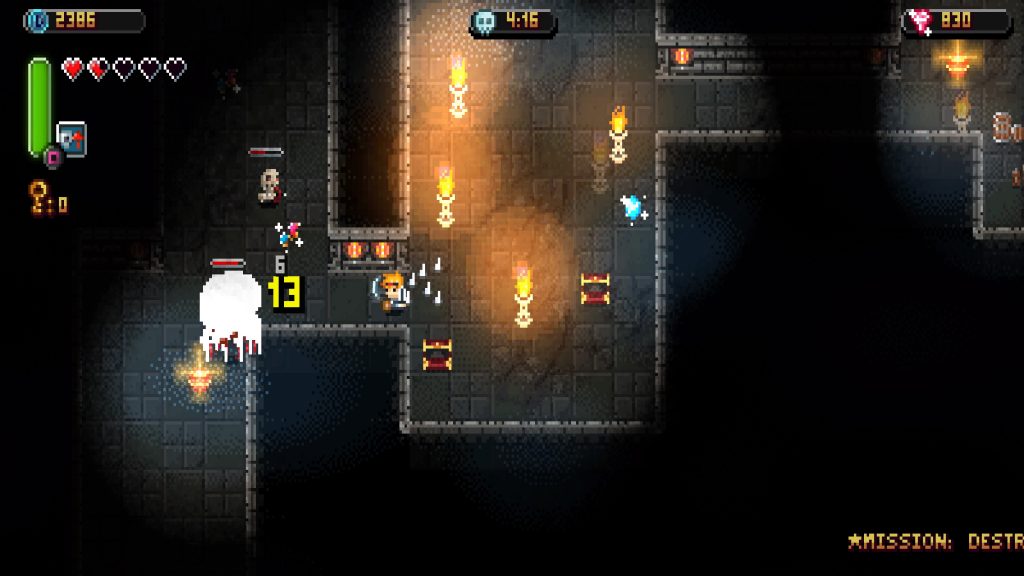 We’re not entirely convinced by the game’s presentation either.  It’s nice that they put some time into the story but the pixel-art style looks tired and chunky.  It’s as close to looking like a Megadrive game as we’ve seen recently and that’s fine but with so many indie games choosing this type of aesthetic for the last ten years, we can hardly treat it as some sort of feature.

But we can’t deny that we really enjoyed Demon’s Tier+.  At least we did once we figured out what we were doing.  It is a couple of design decisions (and a little polish) away from being utterly essential but it could still be a must buy for twin-stick shooter and rogue-like fans.  It is equal points fun, addictive and frustrating but a lot of the frustration comes from you pushing your luck too far and that’s the kind of frustration that we like.  It does feel like a lot of the classes and weapons in the game are obviously lower tier than what the Archer has and so that could have been balanced better but once you find your feet with the game and start making progress, this is one that is hard to put down.