From Finnish developer Snowhound via publisher 1C Entertainment we have Deep Sky Derelicts: Definitive Edition. Originally released on PC in September 2018, DSD has made the leap to current gen consoles with this Definitive Edition. This comprises the original game along with both sets of DLC in its entirety.

What immediately struck us was the beautiful 2000AD styled graphical style. Just look at it. It’s amazing. So much so, that were it not for the fact that this isn’t by Rebellion, we’d half expect guest appearances from the vaults of Tharg the Mighty. 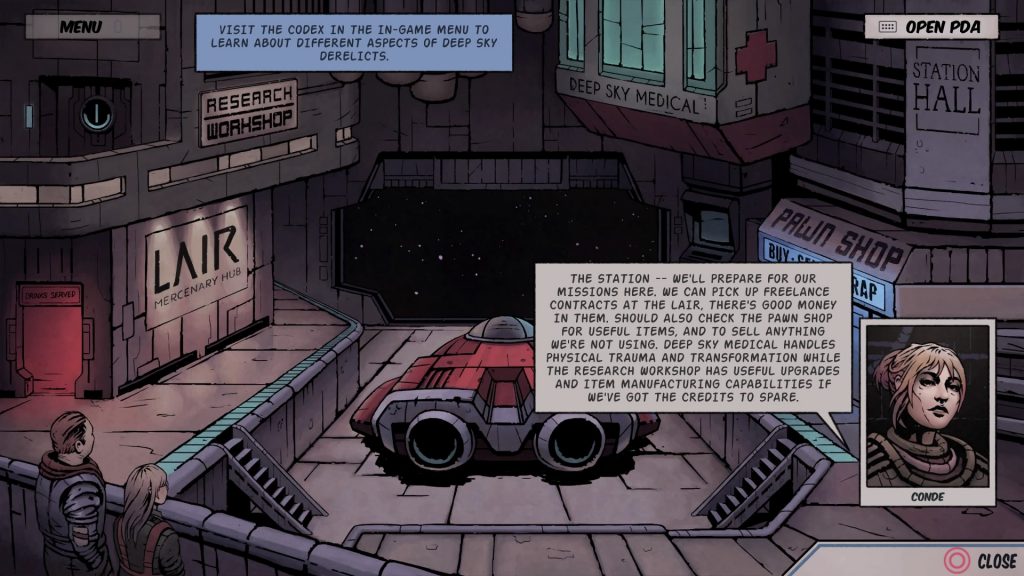 You’ll play as a party of three mercenaries fitting into various class types. We’ll spare you the details of them all, but our initial party was comprised of a leader class, a tracker class and a scrapper class. The leader is has high mental fortitude, the tracker has high initial weapon skill and the scrapper has great scavenging ability. Your initial party makeup is down to the classes you roll, we stuck with the what it gave us at the outset anyway due to not really knowing any better. It worked out quite nicely for us as we’re one new merc away from getting a trophy for sending three aggressive trait characters into a space hulk. Sorry, derelict.

Getting on to the exploration of the derelicts themselves, your progress through each is dictated by action points (depicted here as energy). In addition, your cards available to play with are down to the gear you have equipped. To begin with your weapons will be very much pew pew rather than Judge Dredd-style budda-budda, but once you get a feel for the combat here you’ll soon prevail. 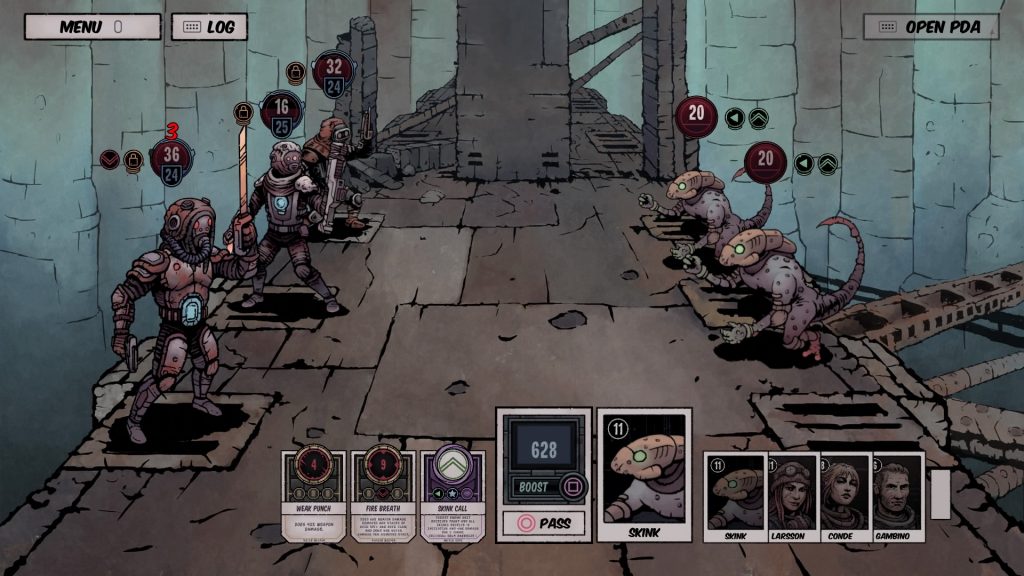 You see, on top of being a turn-based battler, this is also a card battler. It almost feels a little bit secondary in the early stages, when your main focus is to stay alive while exploring the derelicts. Your movement mode can be either stealthy (high energy use), normal or hurry (low energy use). Once we realised the reason we kept on getting ambushed was down to our using hurry all the time, we started to do better. Once we twigged this and switched to normal as our default movement mode, only going with hurry if a dash to the airlock (and escape) was needed.

The early stages of a game usually present themselves as a tutorial of sorts. In the case of DSD we found ourselves on the ropes frequently in the early stages, mainly due to having crap shields and very little health. Not for nothing was our second trophy unlock from having a merc fall in battle. Soon after we got the total party annihilation trophy which gives you some idea of the hardball DSD plays at the outset. Never mind if we managed to get back to the hub, we rarely had the funds to heal up so it was back into the throng with minimal health. 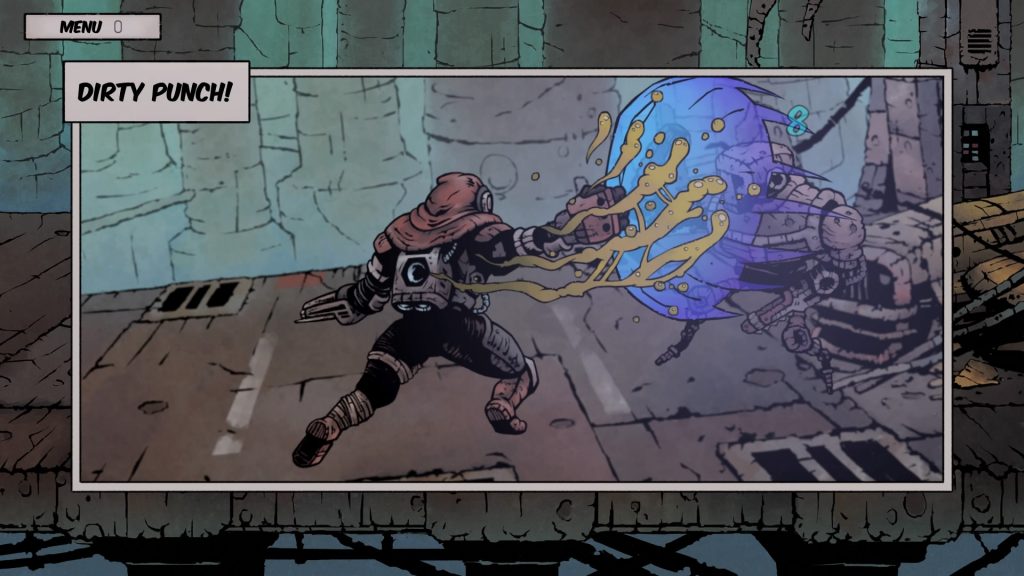 Thankfully things improve and you’ll soon be clearing out the derelicts with 100% completion and minimal deaths. Once you realise each derelict has multiple airlocks you’ll learn to tailor your approach accordingly. You won’t want to venture too far from an airlock, less your current run goes south rapidly.

Your ultimate objective in each derelict is to unlock location data, a mulligan of sorts, but it all counts towards your ultimate goal of discovering the mothership. Practically you can unlock the location data in a ship before meeting the other objectives, although generally you’ll fulfil them too.

After a while, you’ll realise that an attritional approach is often the best angle of attack as you’ll come up short far too frequently as your party members get injured. Also you’ll start to fill up your inventory so you’ll want to offload any unnecessary junk, either by transmuting for more energy or selling them to cover your repair bills at the hub. 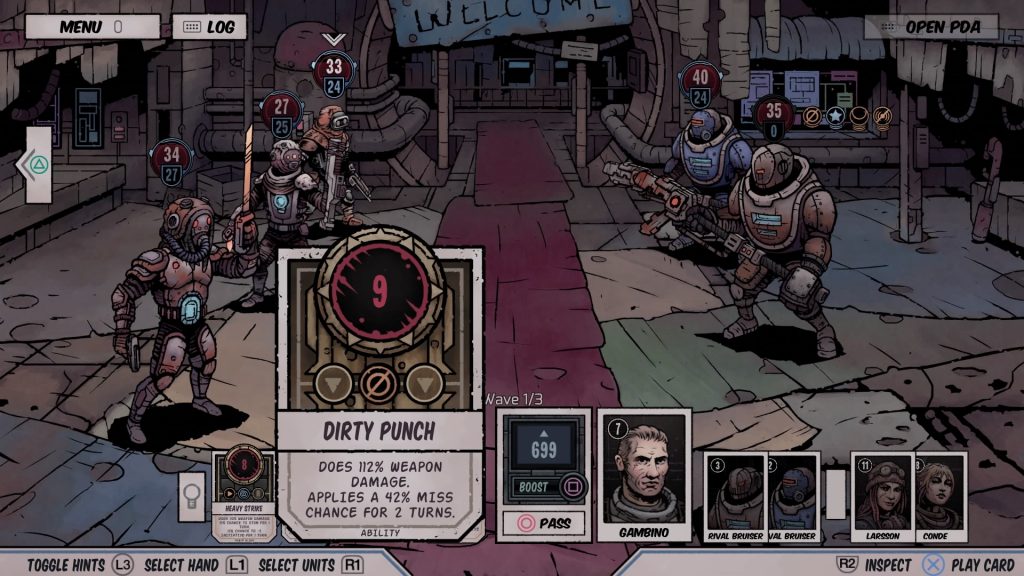 On occasion you’ll have to fight successive waves of enemies in encounters, and you’ll even find yourself hopelessly outmatched due to the RNG and ferocity of their attacks. One mission we had particular trouble with was on a level 3 derelict that we’d wiped clean of all other obstacles. But could we get through this one? Could we buggery. So in the end we walked away and tried a higher level derelict we cleared with minimal trouble. Bafflingly annoying.

Sometimes, despite your best efforts you’ll wipe again and again. Especially when you start a round with three allies against one adversary, yet due to the vagaries of the hidden dice throws you’ll find yourself being battered due to sheer bad luck and the AI repeatedly making saving throws. It’s as arbitrary as any D&D game you may have played, but it’s not hard to feel a little hard done by. Though just as easily the AI can throw everything your way and you’ll be dodging left and right like Thomas Anderson. 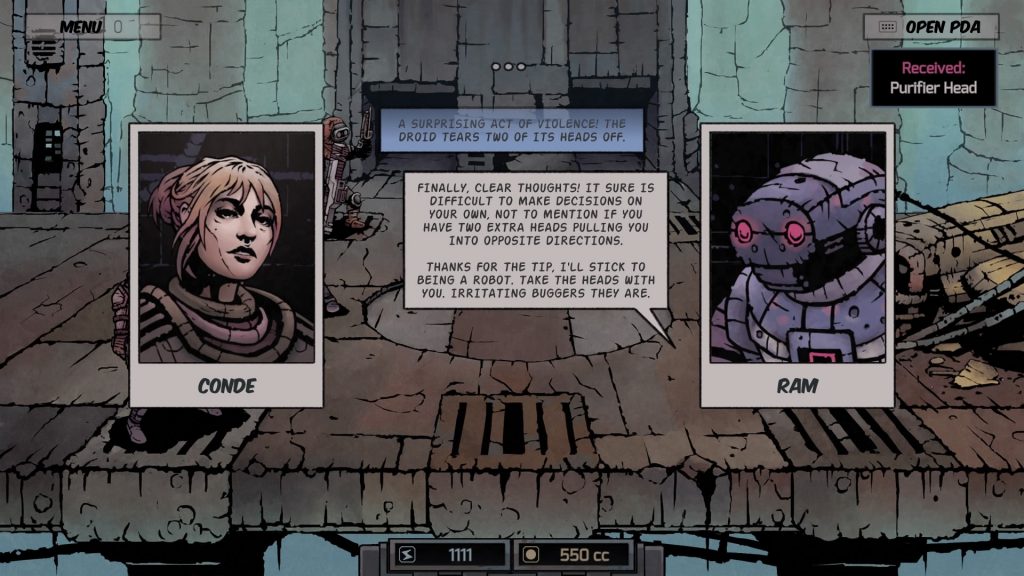 There’s a nice arena mode you can hone your skills in that operates entirely separately from the campaign mode. Again, it’s waves of enemies but it’s fun all the same. Handily you can unlock a lot of the non-specific campaign trophies in this mode, plus its good practice for the main campaign mode.

We could easily write another thousand words on Deep Sky Derelicts, but we have a day job. Plus it’s already well past midnight as we’ve had yet another extended play session so that says something. DSD is a great turn card-based battler we readily recommend.  Sure, it’s not perfect and occasionally the difficulty balancing feels a bit off sometimes, but it’s one of the better indie games you’re likely to play this year.

Deep Sky Derelicts: Definitive Edition
8 Overall
Pros
+ Beautiful comic book graphical style
+ Really hits its stride once you get some better gear
+ Hours of rewarding gameplay
+ Arena mode is a great practice for the campaign
Cons
- In thrall to the RNG a little, hidden dice throws are a capricious mistress
- Early game is a proper slog due to low HP and crap gear
- You can feel a little overwhelmed to start with
- Sometimes you’ll wipe and wonder what just happened
Summary
Deep Sky Derelicts is a wonderful turn based card battler with RPG mechanics you’ll go back to again and again. Hidden dice throws are still a git though.