I’ve yet to reach souls saturation. There’s something oddly compelling in the way those games go about their business and, even the imitators that I expose myself to manage to do something right. Death’s Gambit is another one of those. Taking the themes of life and death, White Rabbit still want to stamp their own mark on a genre that’s now well worn. 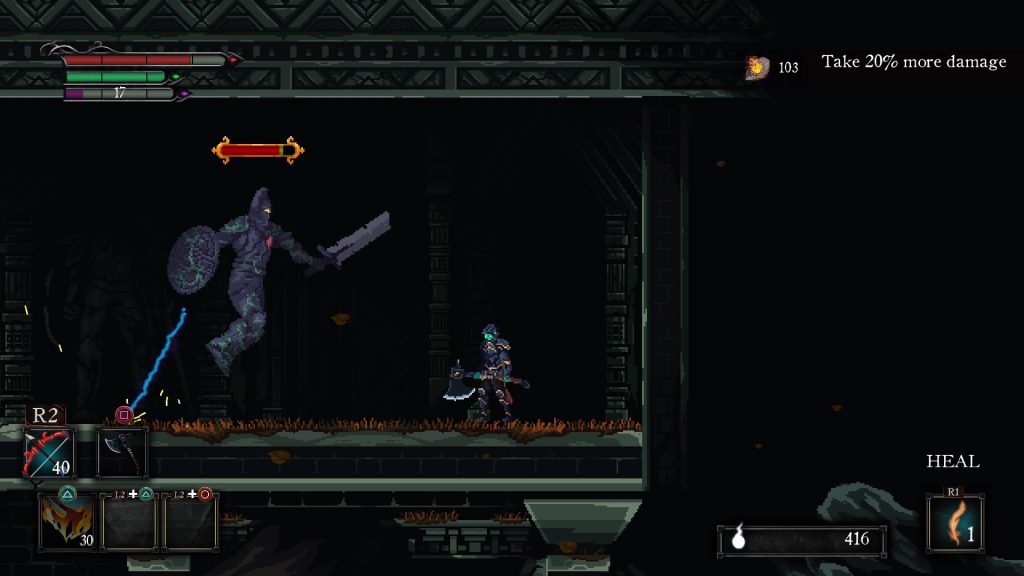 Despite the clear influences, Death’s Gambit looks to tweak mechanics in its own direction. The penalty of death carries a little less weight. Killing enemies gains you shards which are also used as currency. However, death doesn’t take that away. Instead, death reduces your healing feathers. They remain at the spot where you died but you also have the option to reclaim them at a shrine, at the cost of your shards.

Carrying experience beyond deaths allows you to continue building your character and ultimately pushes you forward. Upgrading your stats for the most part, you do find new gear which grants additional points. Weapons upgrade fairly late on with soul stones (consumable experience packets) necessary to upgrade them. As a result, you’re not likely to swap around your weapons too much. You do come across some strong weapons but, if you have a favourite which is a little behind the curve, you’ll be waiting to bring it up to code. 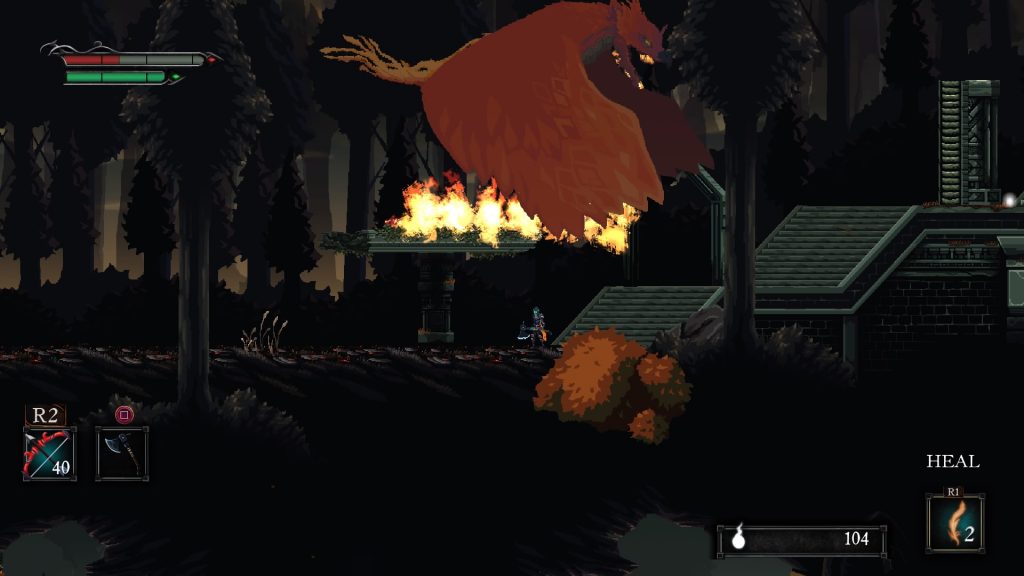 Death’s Gambit does provide an weapon abilities system. You gain energy from successful attacks which can then be spent using these abilities. These act like larger, more extravagant attacks that can quickly deal damage, offer protection or inflict elemental damage to your foes. You buy them from vendors or find them in the wild with attributes and weaponry being required to utilise them. You can settle on some pretty quickly but there’s potential for experimentation. I don’t see this game offering much build diversity but there’s opportunities for something different to foster.

The combat itself feels pretty basic. Your attack options are limited with a single button tied to your melee or ranged weapons. There’s an effective roll and evade with a shield that offers blocks. You can shield bash and parry. Some weapons have combos but they’re not robust or complex. There’s a distinct lack of weight to combat. Hits connect but they don’t feel satisfying. It’s a pity but at least Death’s Gambit has other things to flaunt. Bosses provide stern challenges but some feel like tests of endurance and patience. I’ve never been a fan of bosses that die by a thousand cuts. Unfortunately, Death’s Gambit seems to adhere to this too much. They move predictably but the time it takes to defeat them can feel occasionally exhausting. 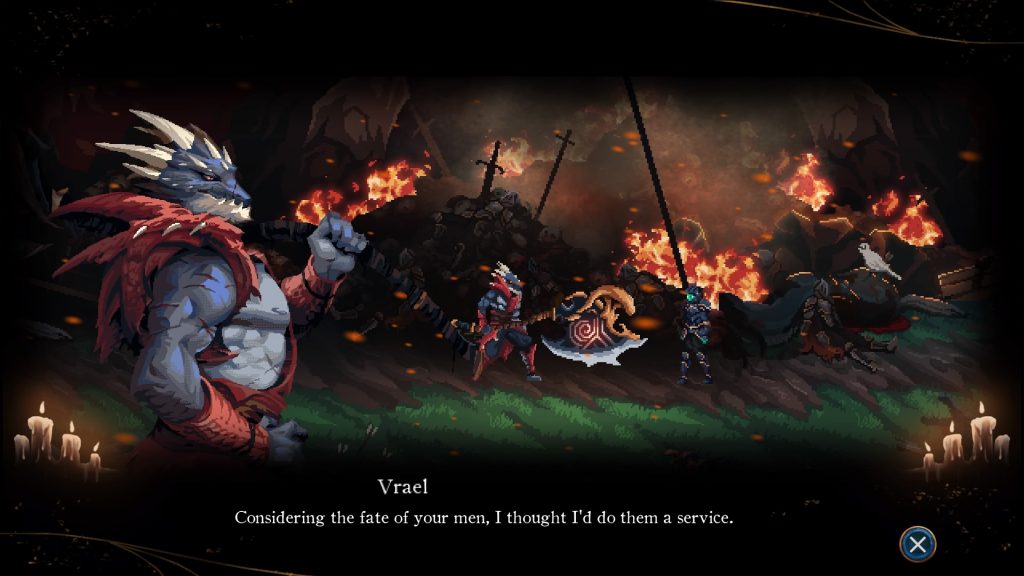 Pixel art presentation is a dime-a-dozen but Death’s Gambit‘s visuals have detail and character to them which make it a pleasure to look at. It does movement very well and takes several chances to show this off in cut-scenes which have a degree of beauty to them. Story may be drip-fed but it’s delivered sometimes between deaths. It takes you by surprise the first couple of times and it serves the tale well with some of Sorun’s background being explored. Sometimes these interludes are playable and deliver the game some genuinely otherworldly moments.

Each area has a different sense of style with them often being populated by unique enemy types. It doesn’t make the world feel disjointed and a new area always brings up a sense of mystery. The latter stages raise more questions than answers with parts of the world going in directions you don’t entirely expect. Boss designs grow more grotesque and intimidating and some areas can feel like real gauntlets. Given how bland the bread and butter combat can feel, this might begin to tire but you do get some extra tools to freshen it up.

The world itself is very cohesive. There’s no fast travel options and, whilst the world of Death’s Gambit is not especially large, the shortcuts offer some respite and quick ways back to Sanctuary. I know a lot of games will resort to such a world but I’m a sucker for every time it’s done well. Finding out you’ve looped back to a previous area or boss arena is great. As is combing every nook for loot. Exploration is so splendid and the lack of a map doesn’t become a detriment. 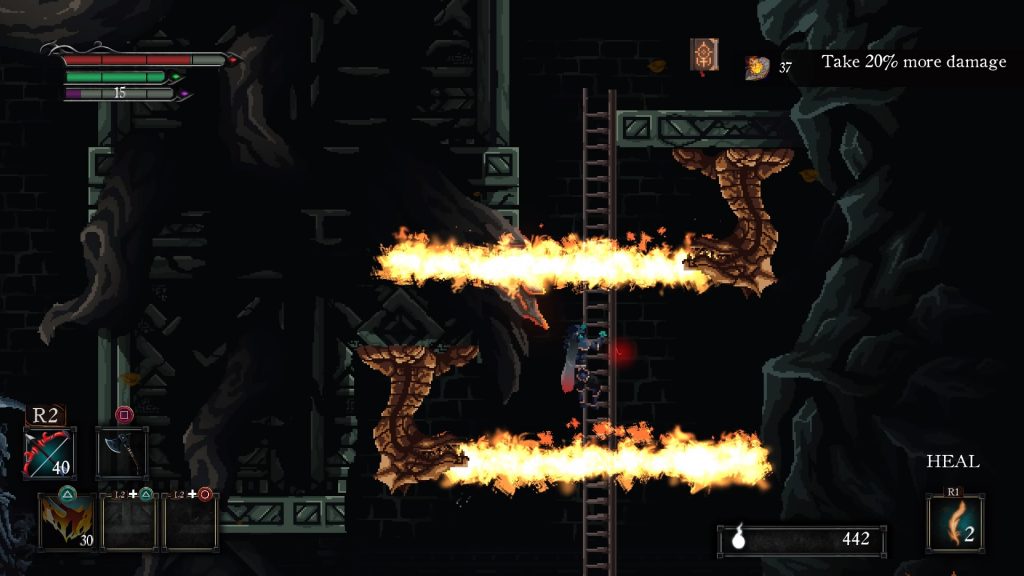 Voice acting is well done although Sorun remains voiceless. It’s a curious omission when you’re playing a named character. He’s not a blank canvas so there’s no real need to mute him for the sake of player agency. The characters you encounter will often cross paths with you. Some merely act as vendors but there’s a core cast that stick close by. They have their own motivations and, as you’d expect, Death plays a prominent role as an ever watchful presence. Music chimes in often. Some areas have their own themes and boss music feels appropriately grand. It’s a fairly decent score although nothing has jumped out as particularly memorable.

There are moments were I’ve felt really down on combat feel and how the game treats bosses but Death’s Gambit manages to do exploration and story in an interesting way whilst at least trying to separate it from the crowd of souls clones. It’s good enough to keep me persevering which is arguably what these games needs to thrive on.

Death’s Gambit
7 Overall
Pros
+ Lovely, detailed art style.
+ Interesting story presentation with great voice work.
+ Fantastic exploration.
+ Abilities and gear offer some variation to the combat.
Cons
- Some bosses are frustrating tests of patience.
- Combat strikes lack impact.
- A small selection of weaponry and armour stifle build diversity.
Summary
Death's Gambit is enjoyable with some valuable tweaks to combat to supplement some otherwise disappointing melee strikes. Exploration feels rewarding and whilst there doesn't seem to be a huge variety of gear and builds, there's a lot to like about a tough, sincere imitator. Worth considering if you're looking for a challenging effort with a tightly connected world.