There’s something about classic survival horror that really appeals to me. I think it’s the routines you build around enemy placements, ammo and inventory management and the daft puzzles that culminate to produce something compelling. Brok3nsite clearly have an appreciation for the genre and Dawn of Fear is their attempt to pay tribute to the games of old. 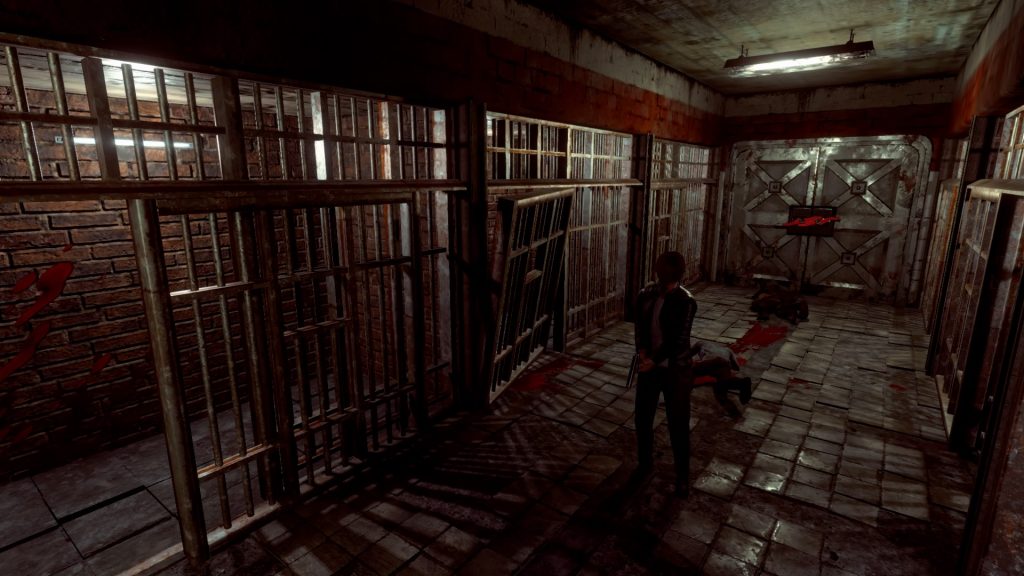 The plot involves Alex, our protagonist. He’s returned to his old home whilst trying to deal with his wife’s suicide. It’s delivered entirely through text and some fairly minimalist cutscenes. I struggle to get invested when the story is delivered in such a bland manner and this is no exception. The pace of the game does hand you something brisk with very few story beats to chew on. It doesn’t really escalate and there’s a small cast of characters I don’t really feel engrossed by.

Dawn of Fear takes a turn for the better with the environmental design. The house has a looping, labyrinthine quality that’s admirable. It’s not as open as it initially appears. Paths behind you close off and enemies can block exits. It keeps you moving forward and preserves a nice sense of forward momentum. It’s a shame they locales don’t offer up much in the way of secrets but the logic puzzles follow the tried and tested survival horror formula. Once you’ve found an object, you can usually draw simple conclusions as to where it goes and what it’s used for. From there, the puzzle solutions are easy to deduce. 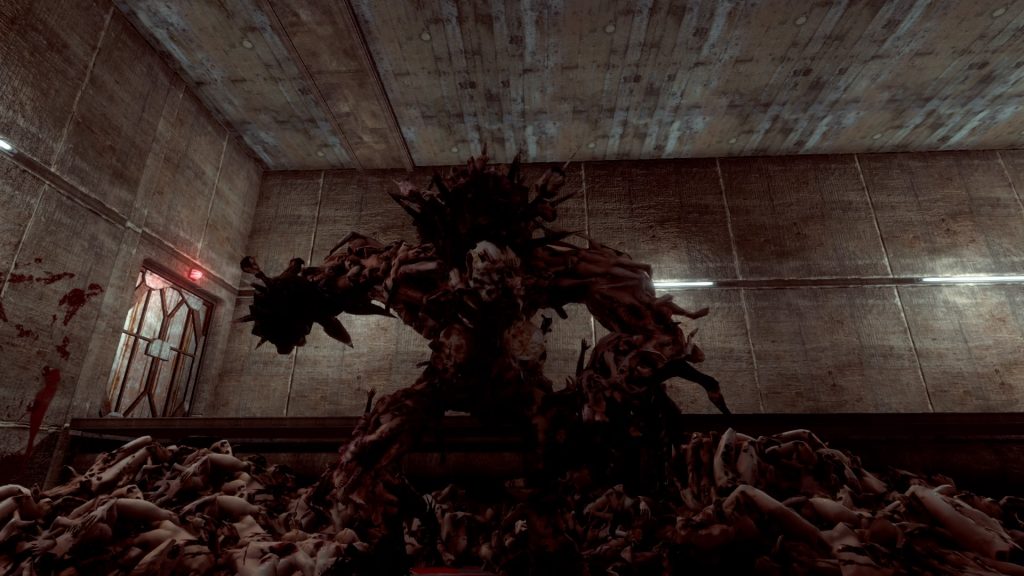 Another thing to admire is the choice of fixed camera shots. The angles allow for some nicely composed, striking images that really do play on your mind. I don’t find this scary but there’s some wonderful tracking shots in the main hall and down corridors that show some smart execution. They’re allowed to explore light and shadow and obscure danger which really allows the player to consider their next move. There’s a tightness to the design with, surprisingly, not a lot of required backtracking. You’re pushed forward well with items being very much in plain sight.

Dawn of Fear‘s inspirations are well on show with the classic survival horror trends taken into account. This includes tank controls but you can opt for something more modern by using the left stick for movement. It’s an option that lacks a little fine-tuning. Changing camera angles can see Alex confusingly trying to find his bearings. 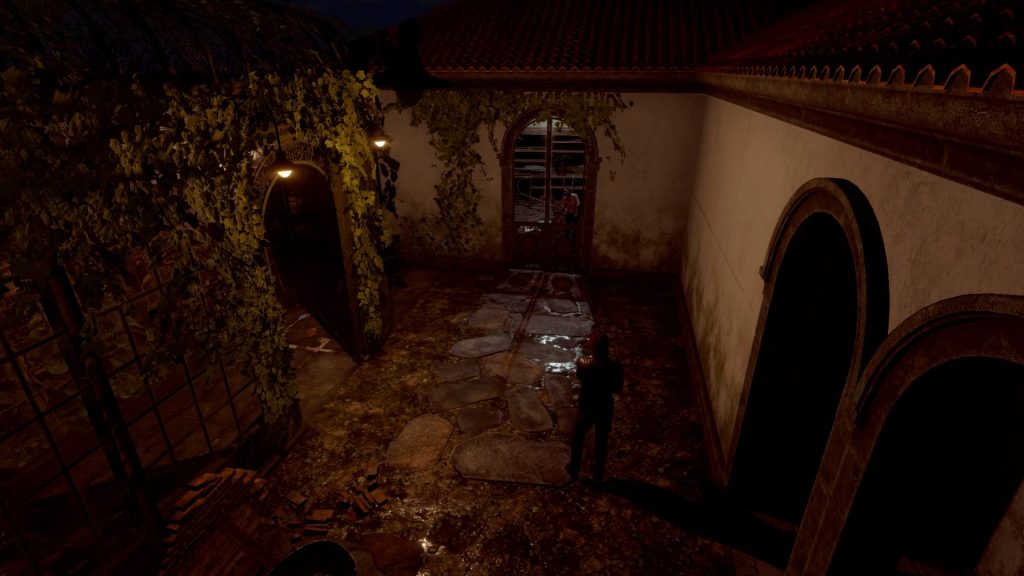 Combat is functional if a little uninteresting. You’re usually outnumbered by zombies with limited ammo. Picking your battles is key although I found the ammo to be more than enough to thin the crowd out. The environment plays a key role in whether to bother taking enemies out with wide halls providing plenty room to dodge and avoid trouble. What’s interesting is that enemies retain their position after leaving a room. They don’t reset so you have to be mindful about travelling back through certain areas. It can also lead to exits being blocked which inadvertently assists with forward momentum.

Zombies shamble and there’s not a huge variety to them which makes them lose their sense of danger fairly quickly. They can close gaps but go down in a few shots. That said, Alex can only survive one bite so you can’t get too careless. Hit detection can sometimes fail, particularly if you are very close to your target and there’s a lack of feedback when Alex takes damage. When hit, he will slow to a limp but, standing still, you get no indication of what state you’re in. Only your bloodied inventory will tell you and that requires a trip to that screen.

On a technical level, the game looks less than ordinary. The environments look fine but there’s a definite lack of polish and transitioning from one room to another can deliver some horrendous hitches. There’s one point especially where the frames just vanish and performance chugs. Animations feel basic and our hero’s movement is somewhat sudden and jerky. Couple this with the frequent changes in camera, you can find precise movement tricky to pull off. 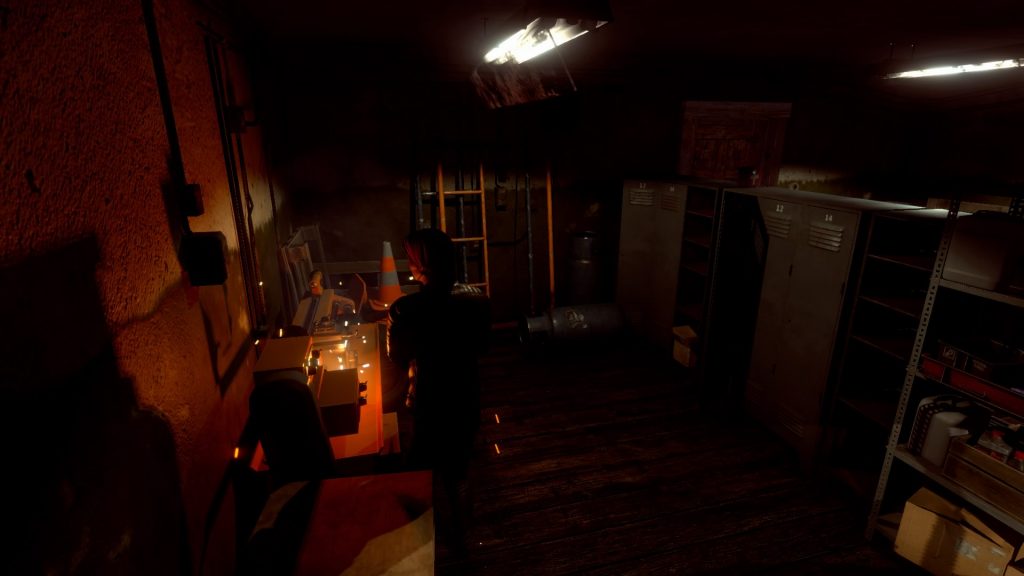 The soundtrack takes great influence from Resident Evil and Silent Hill. Moonlight Sonata gets a run out whilst there’s some admittedly nice mandolin songs in the background. There’s a good score on offer but it overpowers any real attempt to build atmosphere. Enemies provide the same screams and the lack of voice acting for the story flattens any chance of making an impact.

It’s an odd thing to witness. Brok3nsite’s love of the genre shines through but a real lack of execution delivers something that woefully lacks cohesion. Dawn of Fear is thin on ideas and tension. At best, it’s a blueprint or a prototype of something that deserves much more character and substance.

Dawn of Fear
4 Overall
Pros
+ A somewhat faithful nod to the survival horror genre.
+ The house initially seems well designed and fun to navigate.
+ A great selection of fixed camera angles and tracking shots.
+ Solid soundtrack.
Cons
- Riddled with technical problems.
- Very little obvious feedback when taking damage.
- Story is told flatly with no real charm or character.
- Is more preoccupied with paying tribute to the old than having it's own ideas.
Summary
At a short runtime, Dawn of Fear feels like a shell of something far grander. Every good aspect feels somewhat cut short in a rush that seems to hamstring any chance of expansion. Whilst the passion for the genre is very evident, the lack of execution and style results in something flat, hollow and just not all that interesting.