Stop me if you’ve heard this before. A critically acclaimed indie horror title is now out of early access and has ventured on to current consoles. Darkwood comes from the magnificently named Acid Wizard. Hailing from Poland, they’re hoping the momentum can continue with this grim, unsettling nightmare. 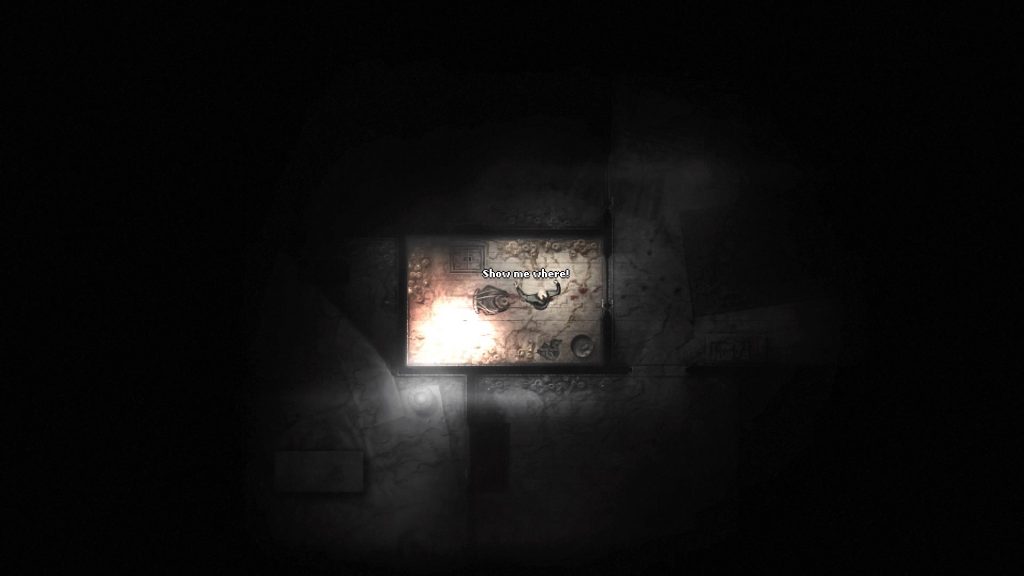 Darkwood‘s tale keeps things simple, at least from your character’s perspective. Your goal is simply to return home after becoming lost in the woods. On your adventure, you may encounter other people who have their own tribulations to deal with and therein lies the intrigue. There are mainstays like the Wolfman who trades items with you but, the remainder of the cast has the potential to be elusive. Of course, exploratory types will most likely encounter these individuals and it does help give each playthrough potential variety and deviation. There’s plenty of little sidestories to stumble into and it’s presented in a multitude of ways. Notes are scattered, there are dialogue trees to decipher and gameplay is punctuated by some bleak, almost static cutscenes. It’s coherent and worth investing time to find out more.

I’d describe the pacing on offer as flexible. At its heart, Darkwood shapes itself around days and nights. The former tests you with gathering resources, crafting weaponry and hunkering down for the eventual nightfall. Exploration is somewhat easier, although the world remains hostile to you. Under cover of darkness, finding and preparing shelter becomes crucial. Nights are tense with enemies prowling outside your four walls looking for any signs of life. Due diligence feels rewarding and your fragile state is always an ongoing concern. That’s not to say you can’t play slightly more carefree. 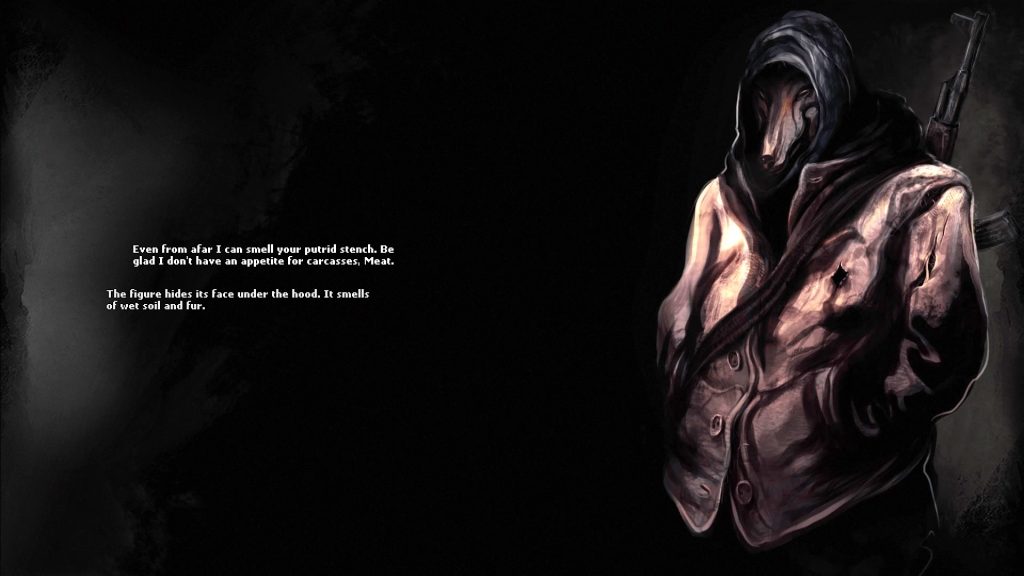 The game offers three difficulties which, whilst all challenging in their own right, offer differing restrictions. Normal comes with the luxury of only losing some of your inventory upon death. You respawn at your latest homestead upon death so a rough night doesn’t become the drawback it could be. There is a small skill tree to indulge in, although you’re encouraged to take any positive perks with negative counterparts. The compromises do impact how you go about your business but your positive options can sometimes be too enticing.

Exploring feels compulsive. Wood can help barricade windows, craft crude weaponry and rebuild structures. Gasoline is a precious resource for power generators and saws. Again, you can interact with the crafting as much as you want but the game takes on a much more deliberate pace. As a result, the game could take a dozen hours or just a handful, depending on how much time you wish to give Darkwood.

Atmosphere is conveyed brilliantly through some bleak visuals and delicious sound design. The aesthetics prey upon darkness and the top down perspective does allow for you to feel exposed in wide-open spaces and enclosed in tight corridors. The way line of sight is used to play with lighting gives the environments an eerie quality. There’s a muted palette on display but it rarely makes the world feel boring. 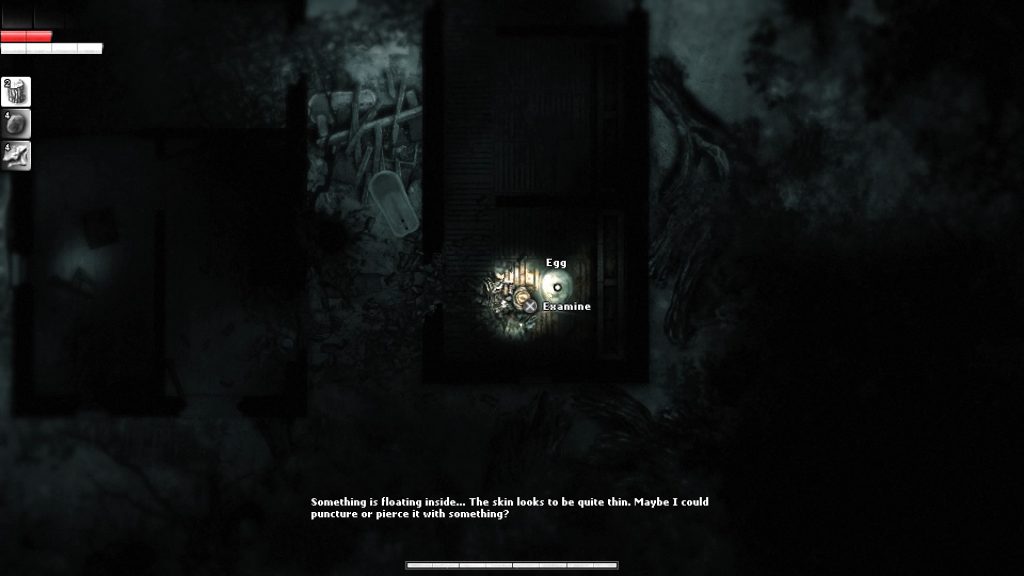 Items you can interact stand out enough and so do enemies. On occasion, Darkwood toys with reality a little and those moments of flourish really do help deliver a nightmarish or dreamlike quality. Some sounds are entirely for function with enemy barks and screams being used more as a warning sign. It’s a game played best with headphones and I certainly found it easier to pinpoint where trouble was whilst shutting myself off from the outside world.

Musically, there’s ambient drones used to magnify the oppression. Gloomy pieces do give the game an appropriately downtrodden feel. It’s effective but the real star seems to be how sound is used whilst moving around. Twigs snap under foot, crows dart from trees, mushrooms emit a bizarre clicking that really helps you spot them. It comes together to really deliver something memorable and moody.

Combat is not commonplace within Darkwood. There’s a preference towards stealth and avoiding confrontation. You’re given a large enough field of vision to scope out your surroundings and most human enemies will warn you off before coming to blows. Dogs will also announce their presence whilst some otherworldly adversaries will only attack if your back is turned. Learning these little tricks can be crucial but keeping your distance works effectively.

When it does come time to fight, your weaponry is rather flimsy. They tend to break after a handful of hits. Ultimately, you have to make them count, although firearms can be purchased and ammo can be found. I don’t tend to resort to combat but being caught out after dark can result in some desperate situations. Enemies will fight each other which is a nice touch. It can come in handy if you’re outnumbered. 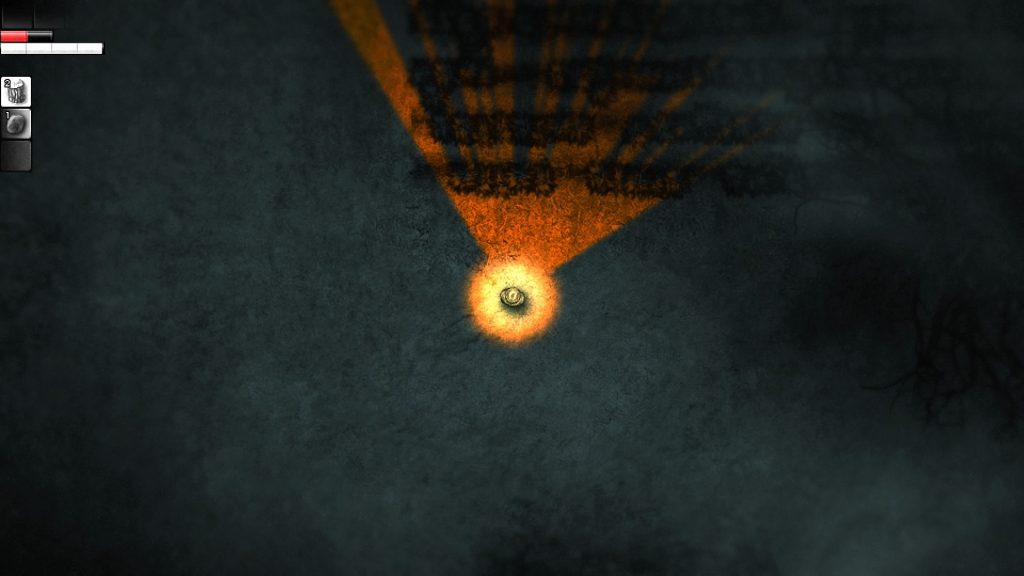 Acid Wizard has cultivated a compulsive survival horror experience. There’s a fantastic emphasis on mood and it produces some truly terrifying moments. I do feel combat’s a little clumsy but you’re encouraged to keep your distance for a reason. Some might have issues with the lack of direction but I feel the map size is manageable and there’s always new loot to find at undiscovered locations.  There’s enough to prevent you feeling frustrated which is always a potential danger in this genre.

Darkwood
8 Overall
Pros
+ Fantastic atmosphere owing to a gloomy, raw aesthetic.
+ Excellent sound design and score.
+ Exploration against the clock makes little victories matter.
+ Well written characters with their own histories and tales.
Cons
- Combat can feel clumsy, although you're not intending to rely upon it.
- There's a tough learning curve to overcome.
- There are times when you feel directionless, although the map isn't gigantic.
Summary
There's an intelligent execution to Darkwood. The gloomy aesthetics and effective sound design heighten your senses and place you precariously on edge. The unflinching challenge adds weight to encounters and each trip to new pastures carries great risk. There is a fantastic confidence with how Darkwood lets you dictate the pace of exploration and it's enticing me to keep coming back.