Classic adventure games are a genre where I’ve enjoyed the wit an writing at the expense of enduring the puzzles. Epic Llama’s 2017 effort, Darkestville Castle has now arrived on consoles with a clear vision to pay homage to the old Lucas Arts formula. With that comes certain expectations but also the potential to see some new modern conveniences. 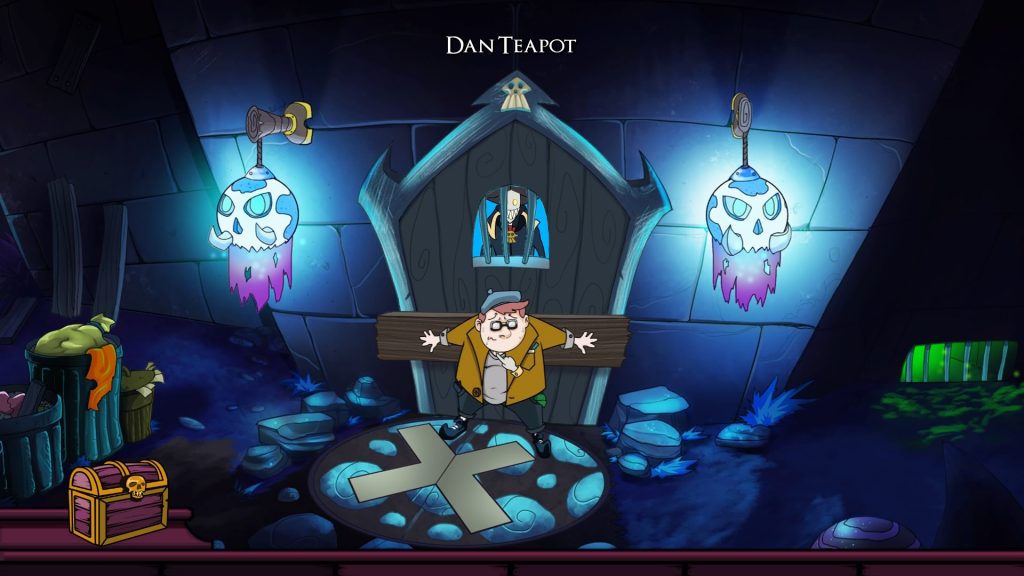 Darkestville Castle‘s story revolves around Cid, a demon who’s initial quest to thwart nemesis Dan Teapot is sidelined by more pressing issues. He loses his fish and the first act of the story involves taking it back. It’s a decently told yarn in four acts that takes plenty of turns. The characters you meet all seem memorable and have some interesting quirks and the adventure Cid goes on does feel fulfilling. It feels well-paced with each act preceded by an interlude. These smaller diversions feature some simpler puzzles that usually place a new obstacle in Cid’s path. There’s a nice, cohesive structure at play with each act having a main objective to accomplish.

I’m always worried about what tone an adventure game’s writing is going to take. One of the things that puts me off some of the more throwback efforts is how forced the writing can sound. Darkestville Castle‘s efforts feel considerably measured. Yes, everyone has their quips but I find a lot of the humour lands. At times, it feels effortless and I don’t feel the jokes are laid on thick enough to be upsetting. 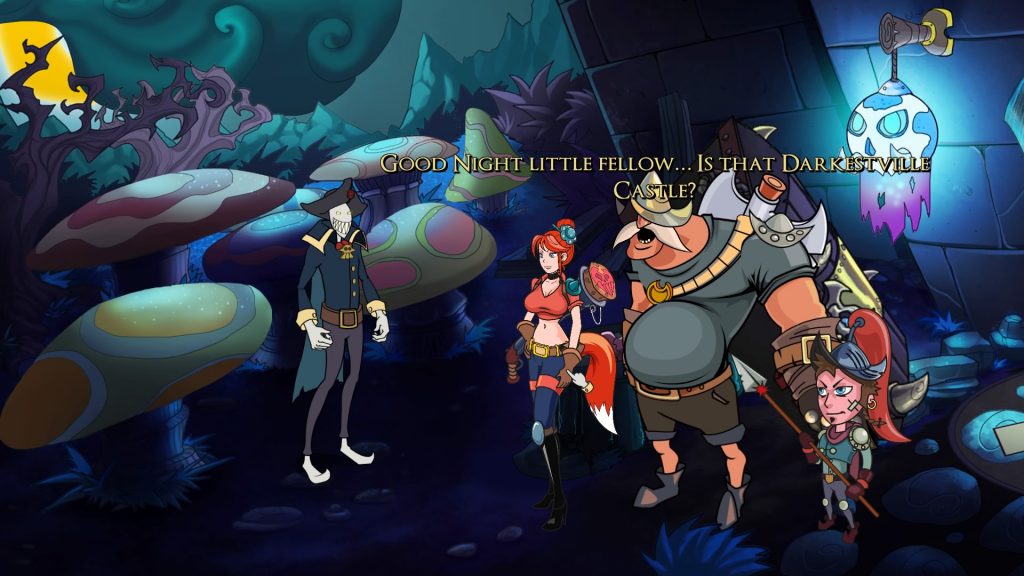 It’s pleasant and fairly relaxed, even when the stakes are raised. Dare I say it feels homely. All the cast feel like they belong and it means the whole world carries the same leisurely tone. It’s very knowing and doesn’t step into absurdity too often. It works well for me and I didn’t find myself groaning at the dialogue or ignoring much of it. I’ve smiled through most of it which is a good compliment to give.

Gameplay plays it very safe as a standard point and click adventure. You use the analogue sticks to move the cursor and help navigate Cid from one location to the next. Items can be picked up and added to your inventory and, as usual, they are used to solve the game’s many puzzles. Unfortunately there’s no way to highlight interactable objects but text accompanies items you can grab, look at and speak to. It does the job, mostly. I can only think of one instance where an item I needed faded into the background. In most instances, the things you need stand out enough.

Items can also be examined which can be crucial to find some puzzle solutions. Books aren’t just there to provide more jokes, for example. The puzzles themselves fit right in the usual adventure game track. Some solutions are a little leftfield but there are hints around to piece it together. I can get overwhelmed when the solutions and puzzles aren’t confined to the same area. Each act tends to contain no more than half a dozen locations which makes revisiting them less of a pain. 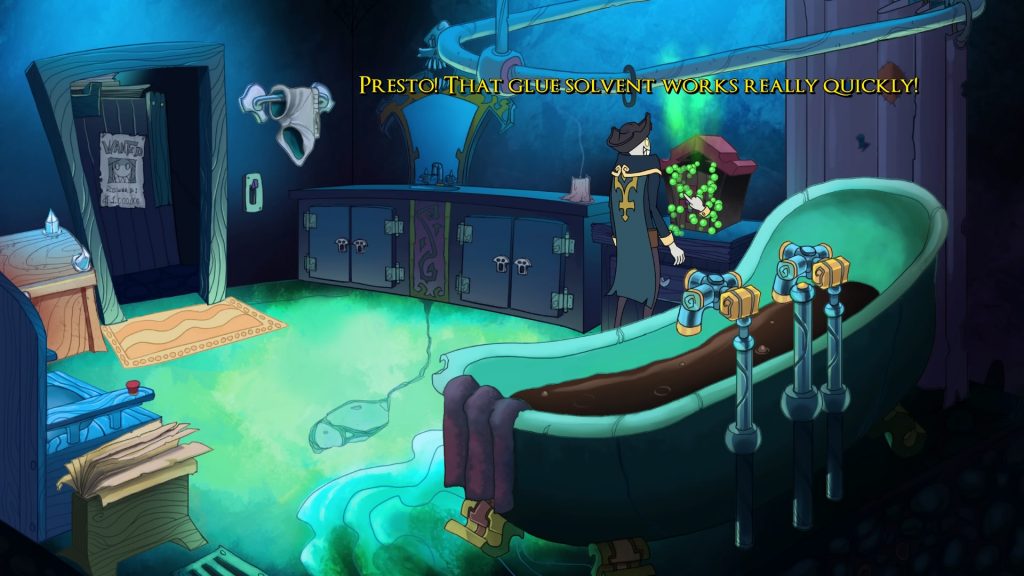 I do find the process sometimes devolves into combining items with people and seeing what fits. Each act feels like a multi-step process where you’re doing favours for favours to ultimately solve a larger goal. Darkestville Castle does not buck any trends and remains tightly packed with the genre conventions of old. As someone that prefers Telltale’s conversation and decision driven stories, this reminds me of what adventure games used to trade in heavily.

If that’s something that’s always irked you about the genre, it’s a welcome warning. You’ll be tested on your ability to think outside the box at times and, whilst the game does have a relatively compact scale, seeing unused items in my inventory always made me feel I missing something.

Visually, it takes on a simple, cartoon aesthetic that wouldn’t feel out of place in a browser game. Despite this, there’s plenty of colour and a few of the character designs are charming. I said before the backgrounds do a decent job at distinguishing points of interest. It might look cheap but I’m not really here for a visual tour de force. I think a couple of the Romero Brothers look fairly bland but the remainder of the cast have plenty of personality to them. 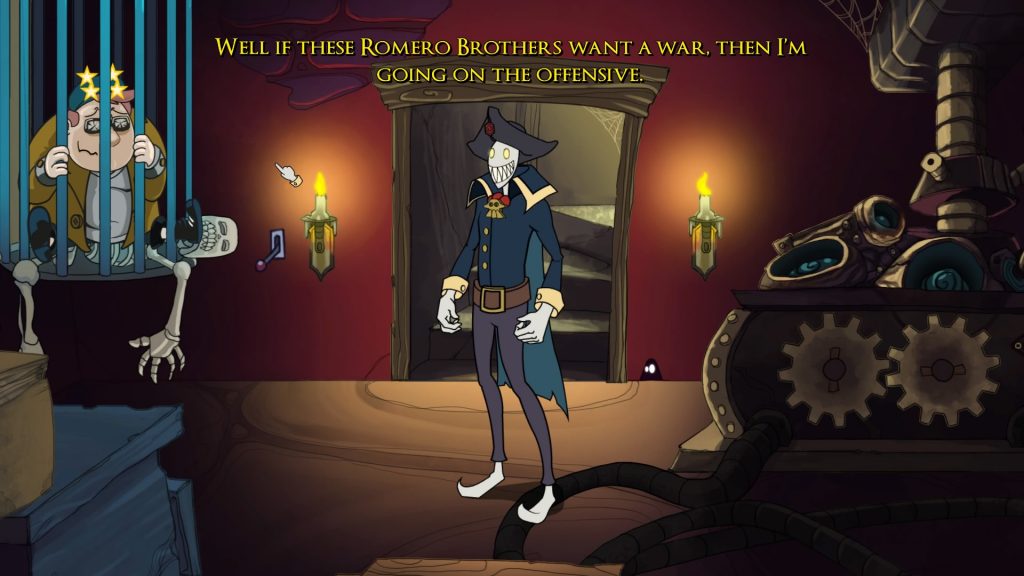 Voice acting is very well done and the deliver of the actors compliments the writing brilliantly. It helps bolster the memorable cast and drives the consistent, playful tone of the story. Nobody sounds out of place and the performances are good across the board. The music is nicely done and keeps up the relaxed pace of Cid’s adventure.

Overall, I enjoyed Darkestville Castle‘s cheeky style, even with the genre trappings very much on display. It’s aiming for a very specific crowd that still likes to be catered for and the writing feels tight and smart. At just a few hours, the game’s puzzles aren’t likely to hold you back too much. There’s a really well executed product here for those after a vintage adventure game experience.

Darkestville Castle
7 Overall
Pros
+ Snappy, funny writing.
+ Well-paced in a four act structure.
+ Well voice acted with some charming characters.
+ Colourful backgrounds.
Cons
- Puzzle solutions aren't sometimes obvious and involve plenty of legwork.
- On rare occasions, objects can be hard to distinguish from the backgrounds.
- A couple of character designs look a little cheap.
Summary
Darkestville Castle is an appreciative, well-paced effort that should keep fans of adventure games happy. Whilst the puzzles can involve a lot of legwork and some oddball solutions, you're encouraged in the right directions and the world isn't expansive enough to get lost in. The structure feels tight and the writing is nicely executed, despite some of the visuals underwhelming.