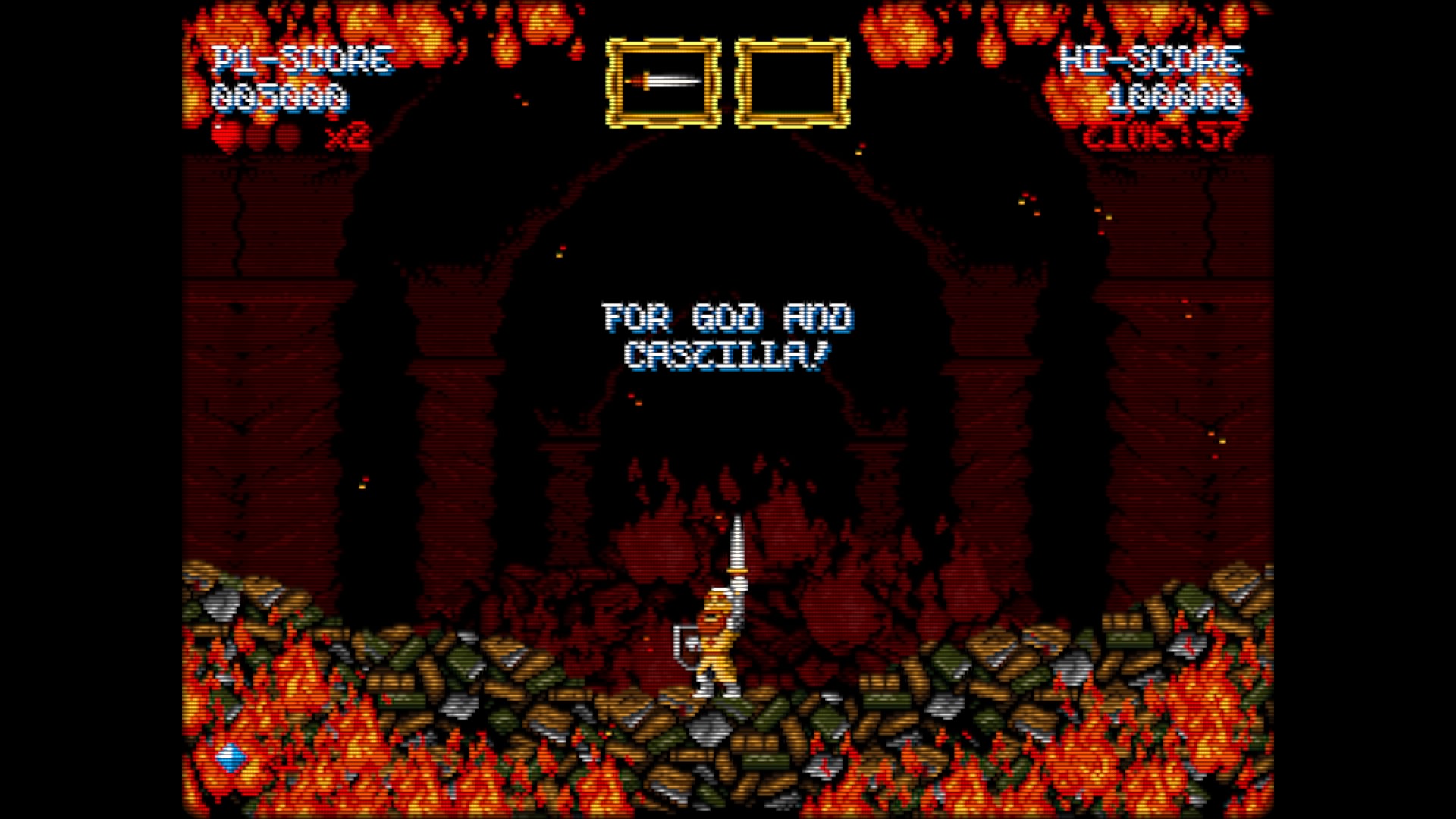 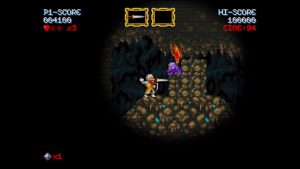 Cursed Castilla (Maldita Castilla EX) is an indie game inspired by arcade games of old, most obviously Ghosts ‘n Goblins. I was burned once with Cast of the Seven Godsends but thankfully this succeeds at every point where that failed. But let’s set the bar a little higher shall we? How does it hold up against the classics that inspired it?

Maldita Castilla was originally released as a free download (you can still try it here) back in 2012. This is an enhanced version with a few changes here and there. The basics are the same though. You play as Don Ramiro who has been sent by the King to tackle the evil that has infected the Kingdom of Castile. Being influenced by arcade games means there’s not a huge amount of story but there’s a little more than you might expect though it never gets in the way.

You’ll travel across seven levels taking on platforming, zombies, bats, possessed armour and so on with boss fights littered throughout. Recognising patterns and taking your chances will be the key to victory, both in beating the levels and besting your foes. If you think you can just run through this without much thought you won’t get far.

You have a range of weapons to find to aid you. The default sword (which you throw out in front of you) does the trick but isn’t particularly fast firing. The daggers fan out into a spread shot, the sickle is fast and comes back to you, the bolas cover a larger area, the axes fire in an arc and the holy fire grenade explodes on impact. Each has their uses but you can pick a favourite and stick to it if it suits your play style. 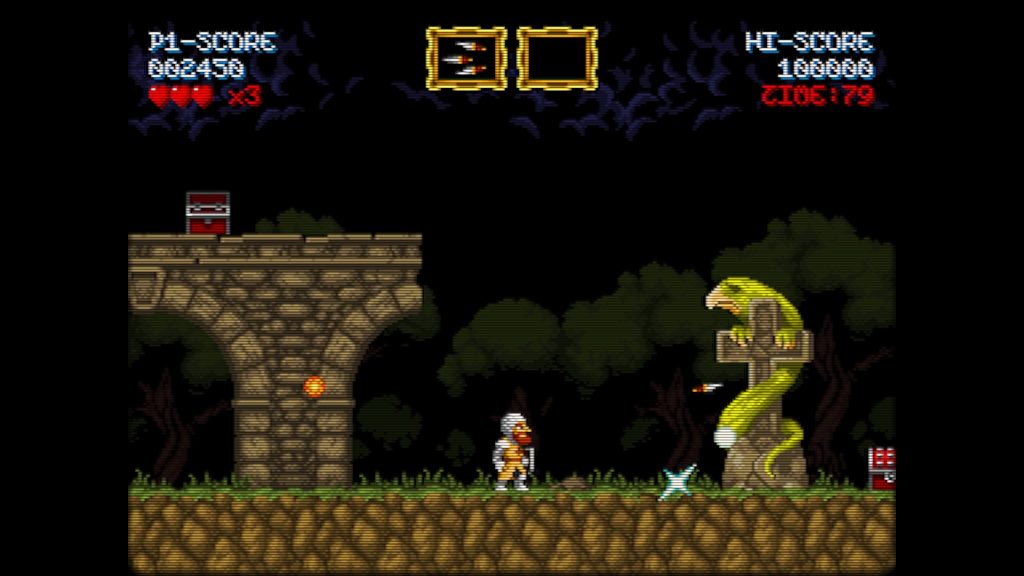 There are also sub items that you can pick up. These range from a point doubler to a fairy that will attack with you, boots that give you a double jump or a shield that will absorb a hit. You can only carry one so again it’ll be up to you whether you’d prefer points, more power or the safety net of a free hit.

Cursed Castilla is a little more lenient than you might imagine with you having three hearts equating to three hits. There’s no armour mechanic but if you find some meat in a chest you can replenish some health. Falling into a pit or onto spikes will instantly kill you so it’s lucky that you have three lives to work with as well. Each level also has multiple checkpoints, including at bosses so you don’t have to repeat entire levels unless you quit the game and come back which will start you at the beginning of whatever level you ended on.

If you do die you return to the default sword and lose whatever sub item you had, if you had one. This can make things harder but I think the leniency shown with the checkpoints makes it an understandable decision. If you run out of lives there are continues which also start you at the checkpoint and you can continue as many times as you need to. Sounds quite forgiving doesn’t it? Well there is a slight catch.

Cursed Castilla has four endings. Hidden throughout the levels are many secrets. Some require you to carry keys to later parts of the level, some require you to kneel in specific points, or attack invisible items. There are five Moura Tears to collect and if you don’t collect all of them then you don’t even get to see the seventh level. If you do collect all of them then you’ll be taken to the final level but if you have continued too many times you’ll get a bad ending, if you didn’t you’ll get another ending and if you found all the other hidden items then you’ll get another ending. 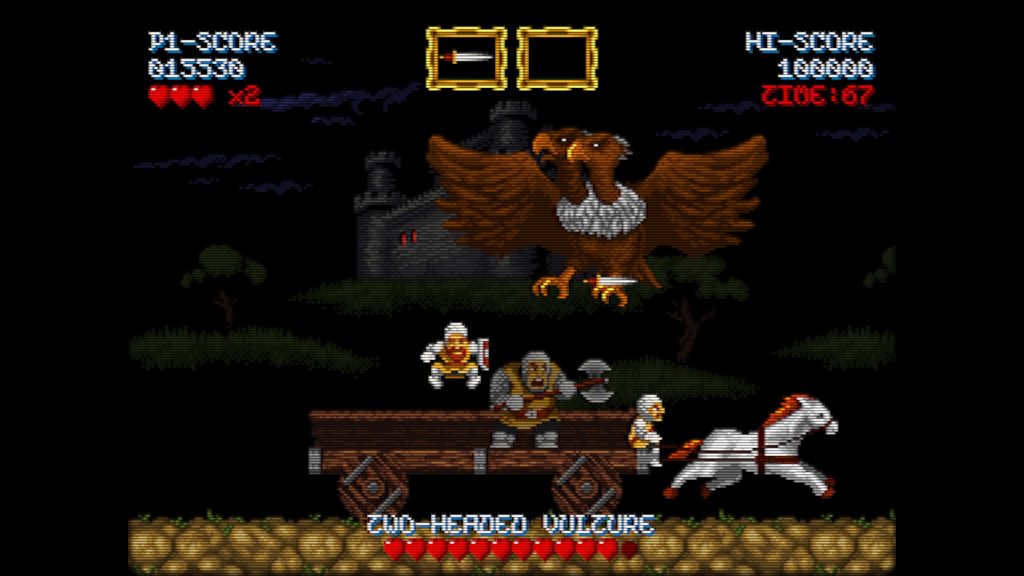 I’ve only managed the one where I didn’t see level seven and then the bad ending on level seven, but the second time through the game went far smoother than the first. Cursed Castilla has that classic Ghosts ‘n Goblins feel where it is designed so well that there is no bullshit, you can complete the game without dying if you’re willing to give the game enough time although the difficulty might frustrate you initially.

Graphically the game nails the visual side of things with chunky sprites with just enough detail and animation. There is a large variety of environments and enemies which stops things becoming too samey and you even have some filter options. It defaults to 4:3 with scanlines and no border but you can remove the scanlines, add a border or stretch the image if there’s something wrong with you. The music fits the tone of the game and the aesthetic but I can’t say there were any memorable tunes to speak of. 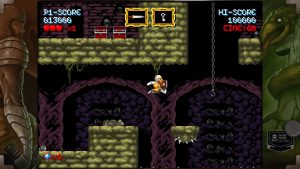 Cursed Castilla (Matilda Castilla EX) is a success. It’s not quite as unforgettable as Super Ghouls ‘n Ghosts but it comes far closer than it has any right to. The gameplay is tough enough to provide a challenge, forgiving enough for a more casual player to play through and difficult enough to get the best ending for a more hardcore player to get their teeth into. That’s not to say everyone should play it but if you have any interest in this genre then you’d be a fool to ignore this.

Cursed Castilla (Maldita Castilla EX)
8 Overall
Pros
+ Very well designed levels + Nails it aesthetically + Both very tough and yet forgiving
Cons
- No real clues to some of the secrets - Some may never see everything this game has to offer
Summary
Cursed Castilla manages to capture the feel of the old arcade games it references perfectly. Tough but fair gameplay is inviting enough to not scare away the less hardcore among us but there is enough content for more skilled players to chew on as well.