The Council is the debut game from Bordeaux based developer Big Bad Wolf Studio, who are by no means novices as this game shows.

This being the first episode of a five part narrative based series, you’d be forgiven for writing it off and assuming it continued in the same vein as the already well trodden Telltale template.

As it happens, this turns out not to be the case as The Mad Ones is a story based RPG with a genuine branching storyline and different outcomes based on your skillset and decisions previously made. To stop you rinsing it for trophies in one hit, it doesn’t award you a trophy for a certain outcome until after an autosave has just taken place. This coupled with the well written, though slightly hackneyed plot mean you won’t begrudge playing the game on multiple occasions just to see what different choices lead to. 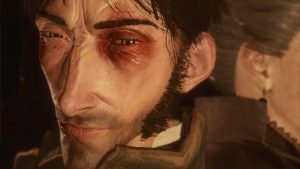 Similar to the classic Beyond Good and Evil, the game feels overtly French from the outset. Besides the Parisian setting you initially find yourself in, your player character has a somewhat exaggerated facial profile. Ok, he’s got a massive schnozz. I mean, look at it. It all adds to the charm of the game though, the extended gestation period from the initial blurry screenshots unveiled in early 2015 clearly having paid dividends.

The story is played very straight without much space for any sort of levity, unfortunately any attempts at humour fall a bit flat. It comes across a bit like a meeting at work where everyone laughs at the bosses’ crap jokes despite the fact everyone hates him. That level of awkwardness anyway.

It doesn’t help that character models are bit inconsistent in terms of their quality. Female characters are generally well done but some of the male characters look to be made out of modelling clay thrown repeatedly at a wall and then scanned for reference for a 3D model. We can only assume that whoever modelled one particular female character spent rather more time working on her ample bosom than other characters. Some degrade almost to the level of caricature, but given the fact the game populates its cast with several historical figures it was somewhat inevitable. 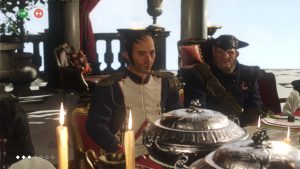 A notable departure from the Telltale template is the fact you actually have a skillset that you level up, some dialogue options being unavailable due to one of three professions chosen in the opening scenes. In addition you have a conversation stamina gauge which can limit your ability to respond to certain conversations beyond basic yes/no outcomes. You can increase your stamina gauge by finding four amber fragments, of which there are conveniently four per episode.

The game has an interesting mechanic when it comes to consumable items for recovering stamina & clearing negative traits. If you overuse the items you gain a chemical dependency and subsequent uses aren’t as effective. There are also trophies for using no consumables in a chapter or just one of each instead. It’s an interesting commentary on the overuse of items in videogames.

When you reach pivotal moments in the plot, you’ll occasionally have a heated discussion with another character, you have a bit of rope to blunder through but ultimately you have to give a positive response to pass them. They’re not a massive hurdle but again, there’s another trophy for overcoming five confrontations in one game. 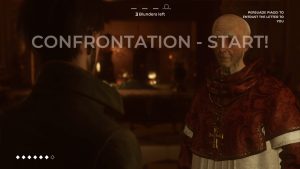 Unfortunately The Council commits a crime from the Hideo Kojima playbook, namely unskippable cutscenes. Fair enough when you first play the game, but when you’re on a subsequent playthrough it’s something of an annoyance. We’re all for exposition and decent plots at PSC, but when you’ve already seen the cutscene or dialogue before, it’d be nice to jump ahead as you could in the likes of the Mass Effect  series. A bit more player agency to make your own choices would nice anyway.

The voice acting is good for the most part, dodgy accents occasionally slipping through the gaps as its clear that some of the voice acting is performed by non-native speakers in a few cases. In addition, the subtitling for anyone that needs it is a bit iffy, one example being “that damn moto” instead of “that damn motto”. Given the game is set in the late eighteenth century, it’s doubtful that the dialogue refers to motorbikes.

This is a very encouraging start to a new series and a great debut from Big Bad Wolf. At £5.79 for the first episode and £25 for the entire five part season it’s well worth considering for purchase. Heck, I bought the entire Telltale Game of Thrones series off the back of a lacklustre first episode as I thought it had to get better (it didn’t). I’d feel much more confident picking up the whole series on the basis of this strong opening entry.

Cons
- Unskippable cutscenes
- Some characters veer a bit close to animated waxworks, others are unconvincingly modelled
- Voice acting is a bit hit and miss at times, probably due to some voice actors not being native speakers
- Historical figures feel a bit shoehorned in for the sake of it

Summary
An impressively realised branching adventure game where your choices carry genuine weight. The first episode of The Council is well worth playing and we look forward to subsequent episodes.