Collapsed is a post-apocalyptic 2D rogue-lite from Glaive Games.  It has you playing as a nameless protagonist (from a choice of four classes) and sees you running and gunning your way through randomly generated levels, facing off against various enemies and bosses and generally dying a lot.

The thing with rogue-lites/likes is that the core gameplay and the roguish mechanics both need to be good.  We’ve seen plenty of games where one of those elements is out of balance and that can spoil the overall package but let’s take a look at the elements of Collapsed to see how it all hangs together.

In terms of the main gameplay, the game does well.  It’s a slick run and jumper with a focus on the shooting.  There isn’t much attention on platforming (there are platforms and jumps but these are entirely navigational and not obstructions or challenges) and that’s good, it’s all about the shooty shooty looty looty here.  The action is fast, smooth and very playable although the controls are initially maybe a little bit complex in that the game uses the triggers for shooting and melee, as well as adding in other buttons for items and interactions, but you’ll get used to it in no time. 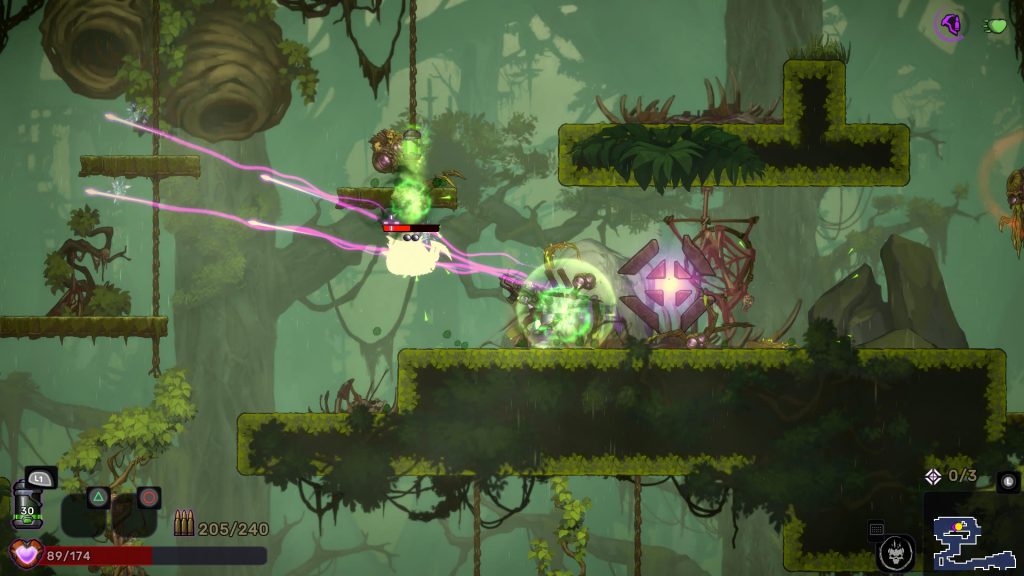 Each run is split into three areas (there are various biomes, so you’ll get different ones each run) and each area has two stages and then a boss battle.  After you finish the three areas, you’ll face off against the end of game boss.  Beat them and that’s it, you’ll go back to the hub world where you can replay it all on the current difficulty or try it on the next difficulty up.

Each stage has a number of portals and your main objective is to activate them, which will trigger an invasion of enemies, and then when the skirmish is over, you activate it again and it’ll either drop loot or will provide an exit to the next stage.

Along the way, enemies will either drop hearts (instant life refills), energy (which fills a flask that regenerates your life via the

button) or ammo.  Ammo is a constant concern, way more than any game we’ve played in ages.  If you run low, or out, you can rely on your melee attacks try to gather more ammo from dead enemies.  Some of the playable classes are more melee based anyway so that’s fine.

You’ll also find those items in lootboxes as well as items.  This leads us into the rogueish aspect of Collapsed.  You pick up items along the way and these have primary effects and secondary buffs.  They come in three types (gun mods, melee mods and body mods) and you can equip three of each for a total of nine (as well as two extra items that have unlimited uses). 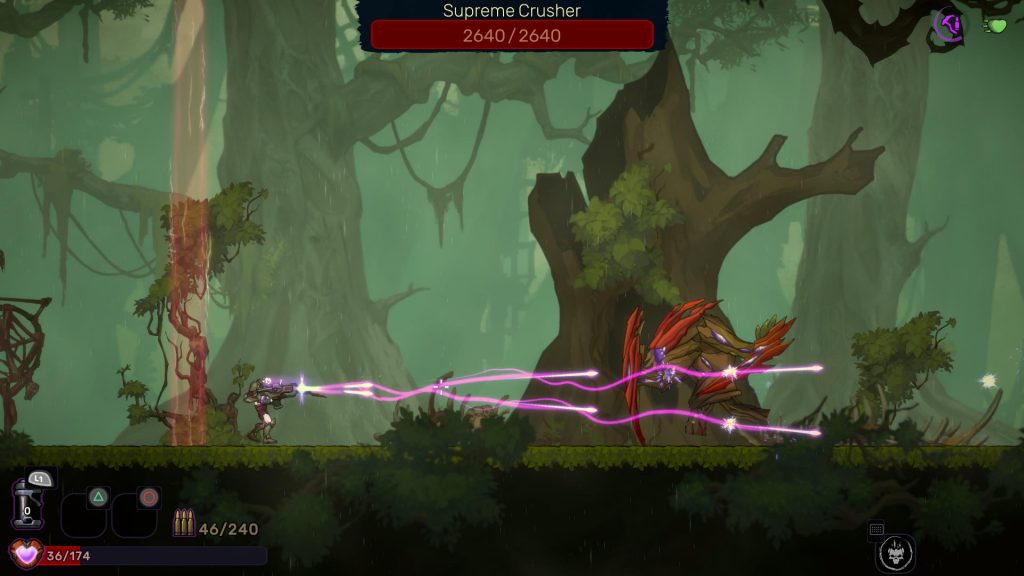 extra defence, healing abilities and extra jumps.  At first the temptation is to focus on those primary effects but after a while those secondary buffs become more important.  These can provide passive boosts to ranged damage, melee damage, crits, defense and so on.  We focused purely on ranged damage, at the expense of those primary effects,  and that gave us the best bang for our buck.  That’s kind of a problem because it takes away from the satisfaction of putting together a cool build.

Also, you get far too much loot.  In the end you’ll be ignoring most of it and while the game does allow you to store a lot of items, there’s no reason for that and you’ll soon run out of personal inventory space if you’re not careful.   If you find yourself regularly dying on a certain level later on, you’ll be earning lots of lower level loot in those early levels (that you’ll constantly be replaying) that you’ll definitely want to ignore.

That said, when you get the exact items you want with the right mix of primary and secondary effects, it’s all very rewarding so that’s good.  And it is fun to pick up loot when you get further in the game than you have before, because you’ll be getting better stuff.  Although the improvements are all on the secondary effects of the loot.  This is a tad annoying because you might have a level 5 (that’s the lowest, oddly) item that adds an extra projectile to your shots but a level 15 version of it will still only have that one extra projectile but now with a more powerful secondary buff. 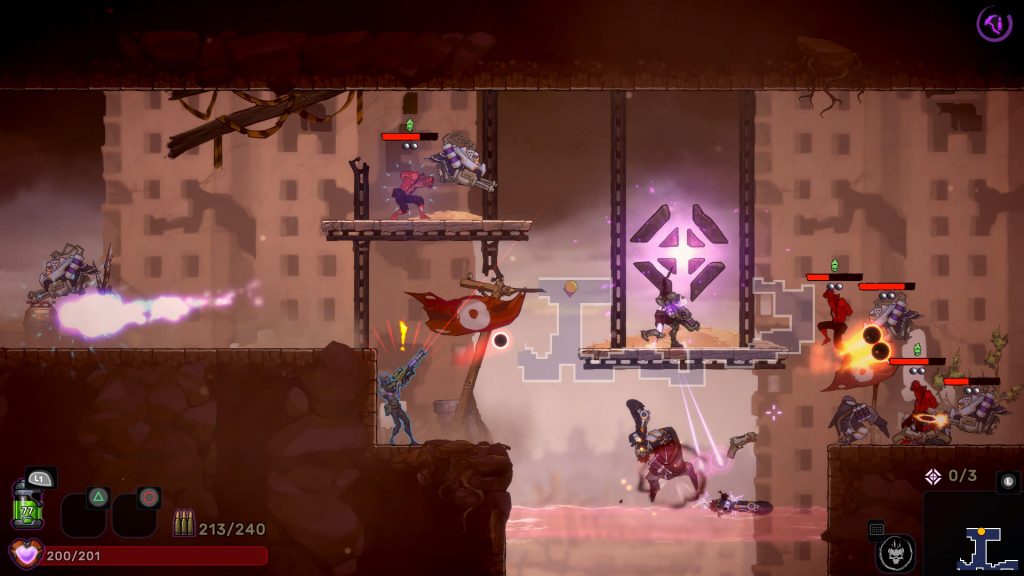 Aside from items you also earn three currencies and these are used on a massive skill tree to upgrade stats and add additional items to the range that can drop from lootboxes.  This is a good idea but progress is very slow.  If you get stuck in the game and feel like you need a stat boost to get further, you’ll have to grind a long, long time to get any help from the skill tree.  Also, the improvements you do make are very subtle so it’s not very satisfying.

That brings us to our experience with the game.  We kept dying on the third set of levels (sometimes before that too, death can often surprise you in this game and some boss battles can go awry very quickly) and this went on for a couple of evenings of play until we finally got good enough to meet Pandora, the game’s final boss, who oddly went down without too much of a fight.

At that point we were able to start on the next difficulty, with improved loot to boot, which made the whole thing enjoyable again.  Until the next sticking point, the first boss of this level.  Bosses, like biomes, can be faced in different orders but at this stage they were all a bit of a nightmare.  If progress was a bit smoother, that would have been nice but this is a rogue-lite so it does come with the territory.   As a rogue-lite, and not a rogue-like, you do keep your items and progress when you die so that’s nice also because time is precious when you’ve got as many indies to review as we do. 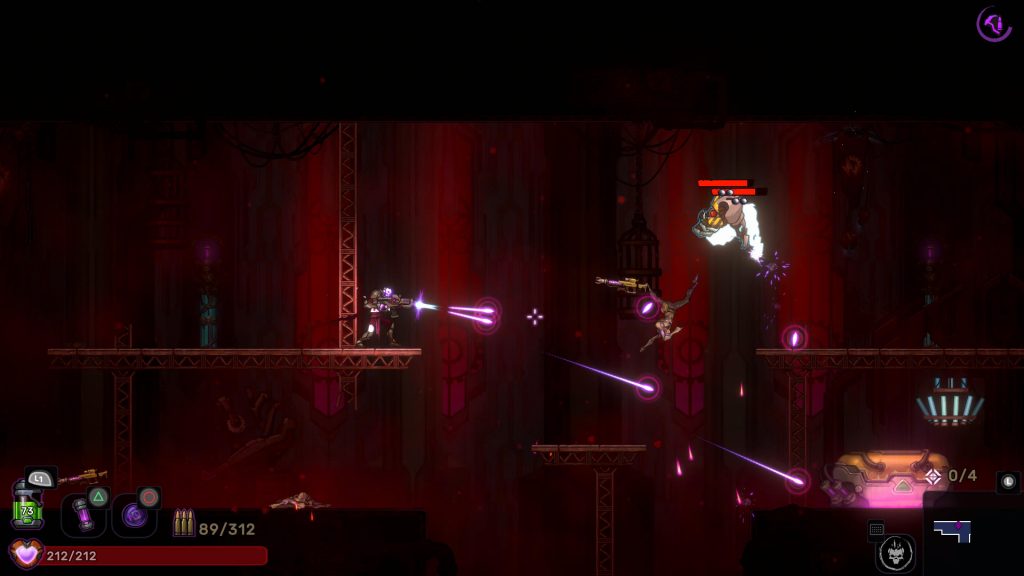 The only other niggle is that the game’s story is told in the absolutely worst way which is to say you get it in chunks via ‘memory nodes’ which give you a paragraph of text with no real context.  As such, the story is entirely lost.  Otherwise though the game is well presented.  The visuals are nicely-defined, colourful and well animated.   The lack of depth can mean that sometimes it can be a bit cluttered but it’s never game ruining.  The game has good sound with some really beefy gun sounds and a decent soundtrack that’s a step above the usual indie fare.

Overall, we do like Collapsed a lot but sometimes the times where you are making good progress are forgotten because you’re in one of its many grindy periods.  As a contemporary of Dead Cells, the game does an okay job but doesn’t quite reach the bar that game created with its near-perfect gameplay mechanics.  But compared to many other rogue-lites, Collapsed fares well and is well worth checking out.

Collapsed
7 Overall
Pros
+ The core run and gun mechanics are very good
+ Very good presentation
+ Looting aspects can be enjoyable and addictive
Cons
- Relies on grinding
+ You tend to get stuck at different difficulty plateaus for a long time
- Items aren't managed particularly well
- Doesn't have a lot of content
Summary
Collapsed is a solid mix of run and gunning and rogue-lite looting which has a good level of polish to it. There's definitely too much grinding to do but it's a good game to drop in and out of.