Remnant: From the Ashes does stick in my memory as a highlight of the now last generation. At times it was frustrating and it’s main gimmick of randomised events didn’t always work in its favour but the gunplay was fun and discovering the different events was rewarding. At the time it was seen as Dark Souls with guns, so here Gunfire Games are back with Chronos: Before the Ashes, a prequel to Remnant. What came before guns? Swords. This is Dark Souls with swords. 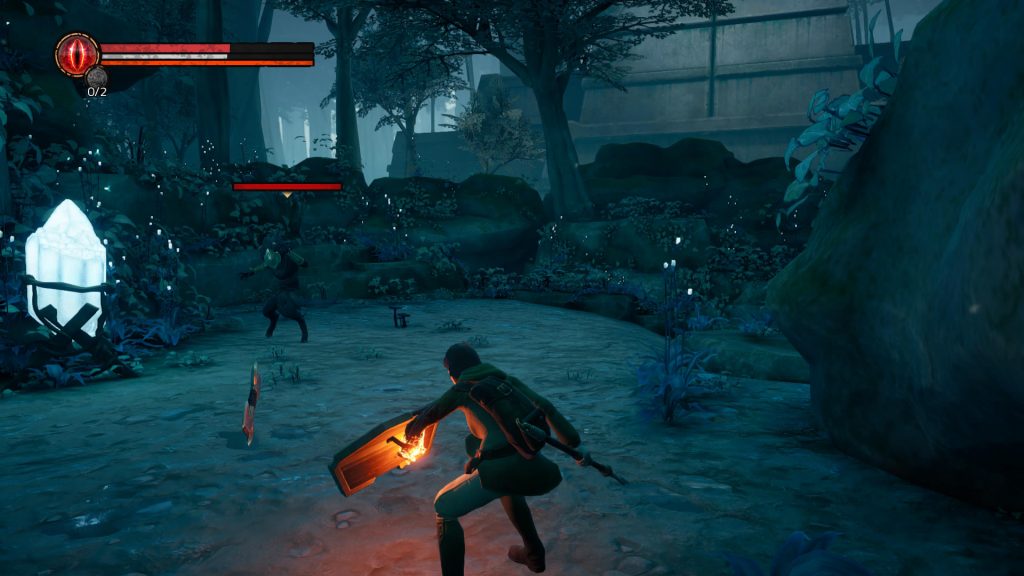 Chronos was actually an early VR title but on the PS4 there is no option for that, this is a ‘flat’ game. It did have a fixed camera which was your view, so you could look around as your character ran past but here the camera follows you around and you have camera control like you’d expect. I didn’t know it used to be a VR title as I played it, but it does make a lot of sense in hindsight.

As you start the game you get to choose between a male and a female and whether you want to start with an axe (strength) or a sword (agility). Then you’re thrown in as the chosen one who has to defeat a dragon and its guardians. That means travelling through four zones fighting enemies, solving puzzles and levelling up. 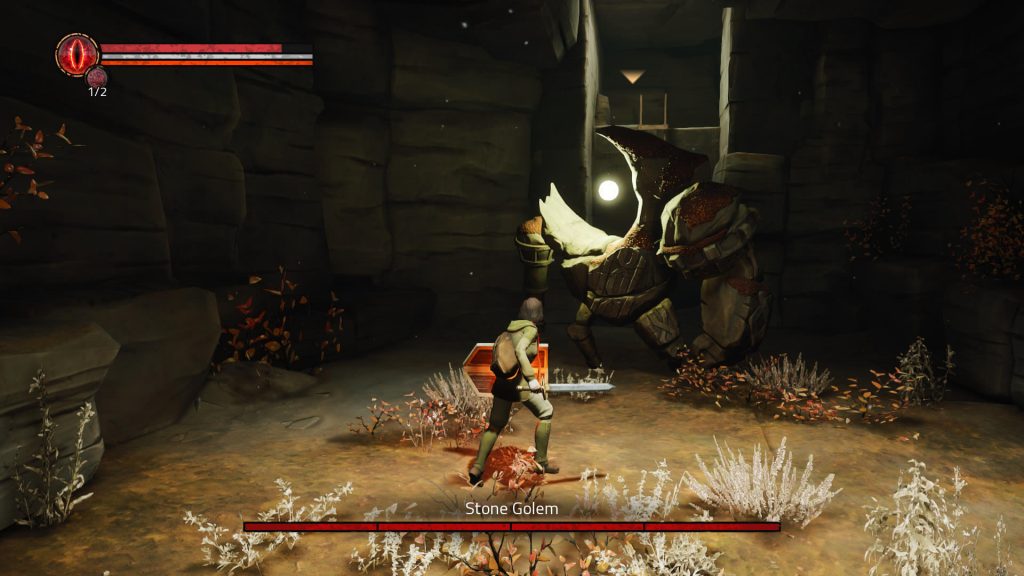 As suggested in the opening paragraph this is heavily influenced by the Souls series of games so you’ll run around 3D environments whilst combatting enemies with a mixture of light and heavy attacks, blocks, parries and dodges. It has a similar rhythm but is generally a little more forgiving than From’s titles. Early on you also gain a crystal that powers up your weapon when you dodge perfectly or charge your heavy attack. Attacking also builds a meter which, depending on what crystal you have equipped, gives you a boost for a short period which can mean extra damage or higher defence. If you’ve found a dragon heart you can use it to regain all your health, but these are very limited and only replenish when you die and respawn.

Killing enemies gains experience and this will level you up which handily refills your health. You gain two points per level up to put into one of four skills: agility which will power up your attacks with lighter weapons, strength which will give you stronger attack with heavier weapons, arcane which will improve the effects of the crystal you have equipped and vitality which improves your health. Chronos has a unique mechanic that I’ve yet to mention however, when you die you age a year and this comes into play in a few ways. 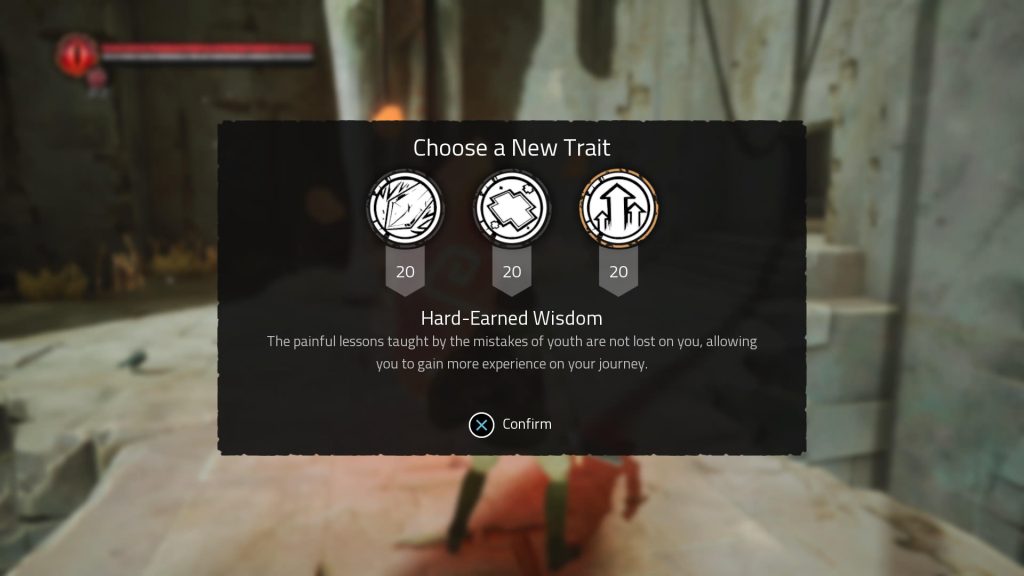 When you’re younger your wisdom hasn’t developed yet so the arcane skill costs more to level up than the other three, however as you get older these physical traits start to cost more and the arcane skill starts to become more cost effective. Similarly as you reach milestone birthdays (20, 30, etc.) you get to choose one of three perks to further strengthen you which can range from just a straight stat boost to increasing the window for your dodge or parry or allowing you to upgrade your weapons further. It’s certainly an interesting mechanic.

Other than that there is a far larger focus on puzzle solving than you normally get from this type of game. These are Resident Evil style puzzles, so you’ll need to find an item somewhere and use it somewhere else, possibly combining it with another item first. There are some more cerebral puzzles too but exploring the zone to find the items required to progress is more common. There are fewer enemies than is the norm for this type of game and they don’t respawn until you die so backtracking or warping between waypoints isn’t dangerous if you’ve cleared everyone out but that also limits the experience you can get. 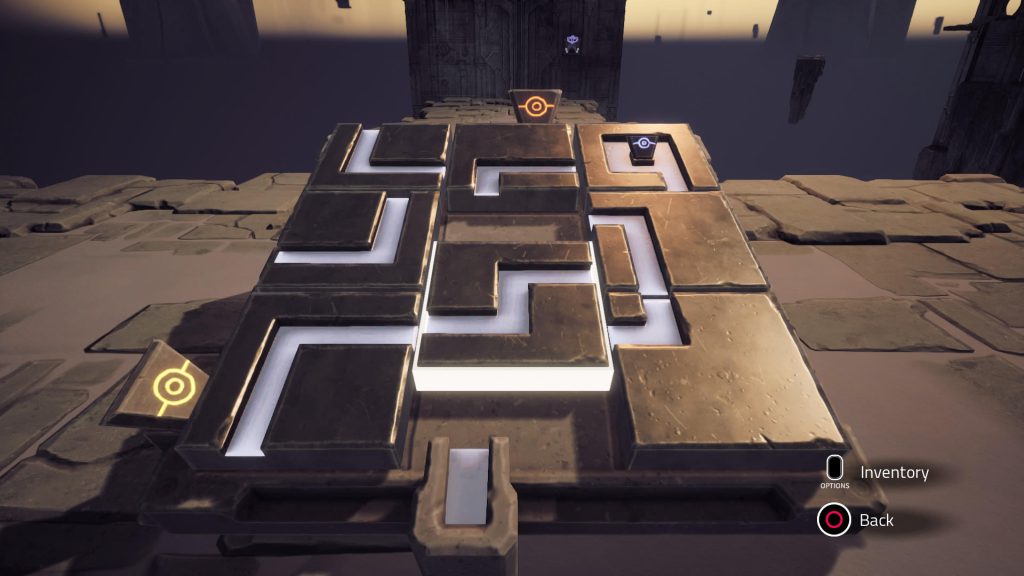 At the time I thought it felt a little sparse, wondering when the game was going to go up a gear but it never does and I guess that it down to the VR heritage requiring a slower pace. The visuals too aren’t very impressive which again is probably a hold over from being four years old and a VR title. It’s not ugly but the style chosen is very flat and some of the assets feel quite low quality, like the items you pick up. It almost felt unfinished as I played it and you’d think in VR the models would have to be better since they’re so close to your face but on PS4 they look quite rough. I also often saw holes in the world, like the seams didn’t quite match which added to the feeling of things not quite having the polish you’d like. Load times are also quite long when you warp or respawn.

The thing is as cool an idea as ageing when you die is, when I completed the game I was early thirties and you start at eighteen and can go all the way to eighty. As such I barely got to see the mechanics for levelling up or getting perks (I did reload my save and kill myself over and over as research). Admittedly this was on the middle difficulty of three so maybe I’d have got closer to the cap on the higher difficulty. Perhaps it is just there to help players who do get stuck, but if you have played this type of game before and are good at them then you’ll be missing out on quite a major part of the game. 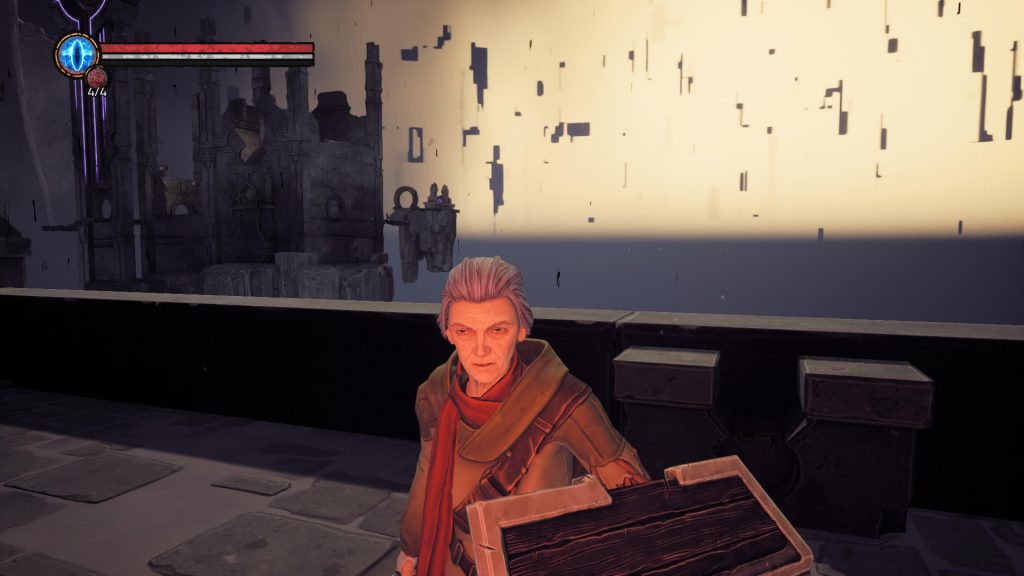 Still, like Remnant this isn’t a full price title so although it’s a little rough around the edges and a little pedestrian it will take you about ten hours of playtime to get through it. Apart from a couple of puzzles (there’s a sliding puzzle later on that I despised) I enjoyed my time with it even if it never really excited me. Obviously if you loved Remnant‘s gunplay then Chronos: Before the Ashes isn’t going to provide that or the same loot rewards or event based gameplay. It does offer a more linear experience and slightly more insight into the Remnant story if you’re into that. Otherwise this will appeal more to the traditional Souls fan, maybe after you’ve played all From’s titles, the two Surge games and even Gunfire Games’ own Darksiders 3.

Chronos: Before the Ashes
6 Overall
Pros
+ Some enjoyable combat
+ Ageing mechanic is a clever one
+ More Remnant lore
Cons
- Feels rough around the edges
- Never really gets too exciting
- Long load times when dying/warping
Summary
Chronos: Before the Ashes is an enjoyable enough Souls like with more puzzles than you'd expect from that but its VR roots make it a rather pedestrian affair with rough edges. The ageing mechanic is a great idea, it's just a shame that to experience it fully you have to be really quite bad at the game.