RPG’s brings to mind hundred hour epics with men in armour and women in corsets, with sprawling towns, movie quality cutscenes and plots that go on for hours.  Cat Quest has none of these, but it does have cats, lots of cats. It would be easy to write Cat Quest off as a joke, as a jaunty RPG based around a world of cats. To do so though would be to miss a really special game, one with charm and wit in abundance.

A brief introduction sets the scene and story, in a world ruled by cats an ancient menace in the form of dragons has come back.  You play a cat who has the mark of a dragon slayer and off you pop on a mission to save the world, killing dragons as you go. 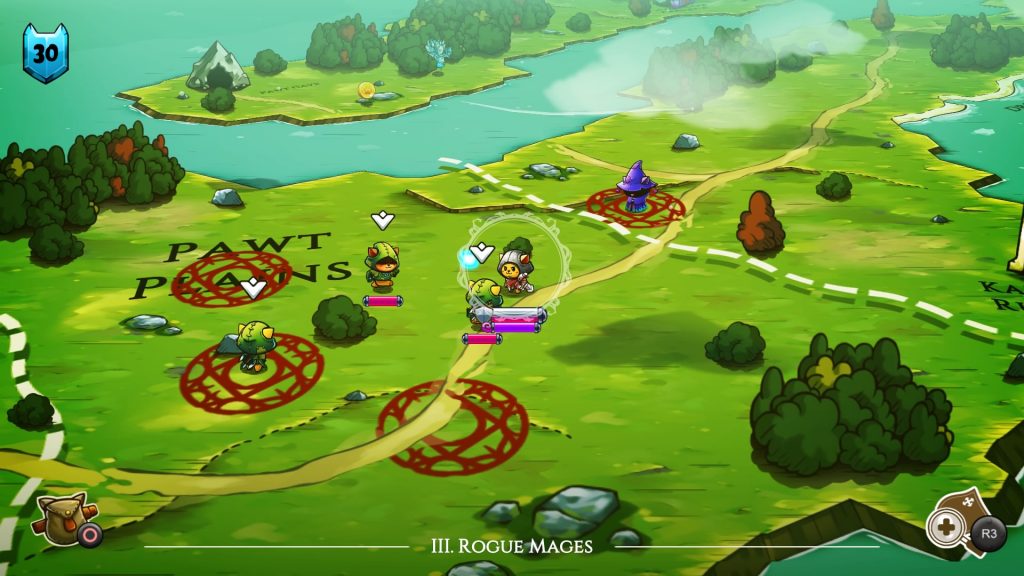 Cat Quest is immediately charming in how it presents itself. The use of bright colours and the relentless stream of cat puns makes for a fun atmosphere. The action is viewed from a slightly off centre top down view and the world is represented in a style which makes it look like a map spread on a table.

There are the odd dungeon scattered across the map, and these are gated through level requirements. Instead of being sprawling many level labyrinths these are generally single area locations with a few baddies and a single chest. Again keeping things simple and streamlined. 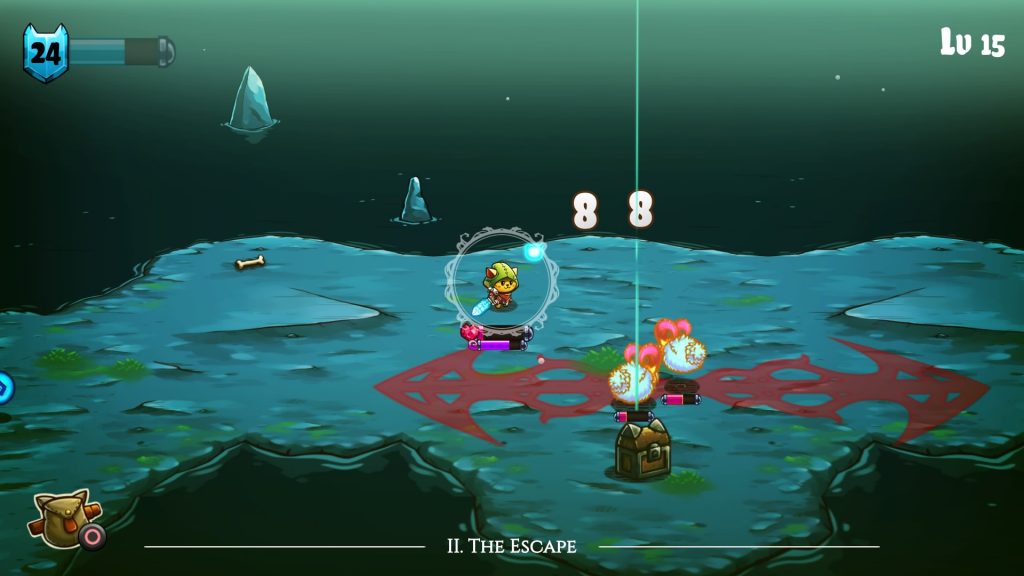 As an RPG there is a lot of combat and this is handled in real time battles, enemies are visible and will attack if you wander too close. Combat is kept simple with an attack and a roll on the face buttons and up to four spells mapped to the shoulder buttons. The spells use mana and this is replenished through physical attacks. That’s it, there are no potions or items to worry about, everything is very immediate, but also very repetitive. By the end of the game combat becomes all about button mashing and is not really too engaging.

There a load of quests to do and, as with everything else here, they are light, comedic and full of cat based puns. These quests help guide the game and level you up and form the meat of the gameplay. Often quests follow the trials and tribulations of one particular character with small tales being told as you complete them. The writing here, and through the rest of the game, is of a very high standard. Full of quirky characters and funny one liners. 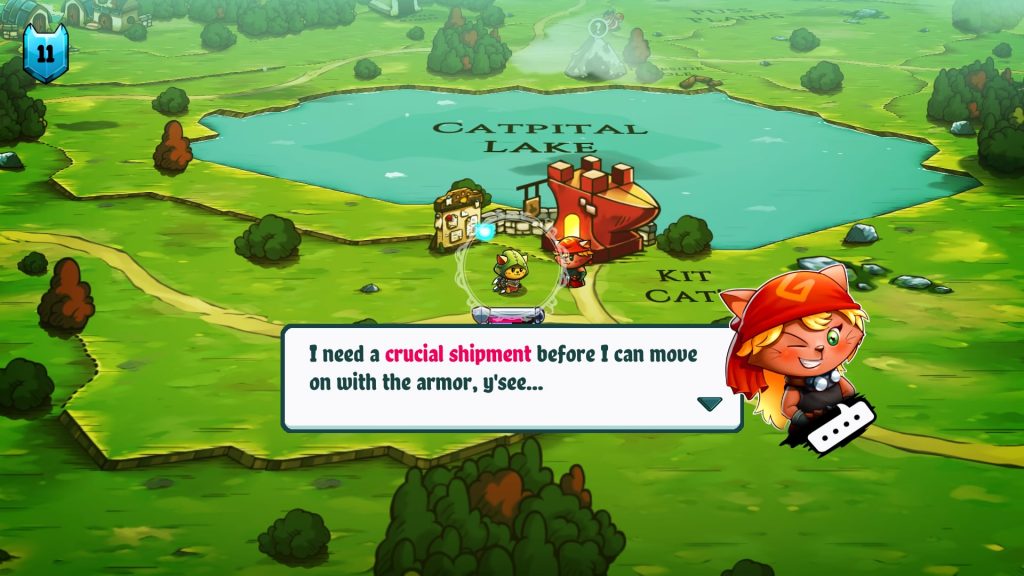 The sense of fun and light heartedness permeates every aspect of the game, from the names of the map locations through to the character designs, the king is cast as a lion for example. The level of commitment to the joke is admirable and Cat Quest just about manages to find the right balance between being funny and not being annoying.

There are some compromises with this streamlined vision though, such as the fact there are no towns to explore and merchants don’t really exist. Towns are displayed on the map but are basically just a quick save location and somewhere to check the notice board for new quests. There is also no skill tree or in-depth levelling system, when you level up you’re just given more health and strength automatically. 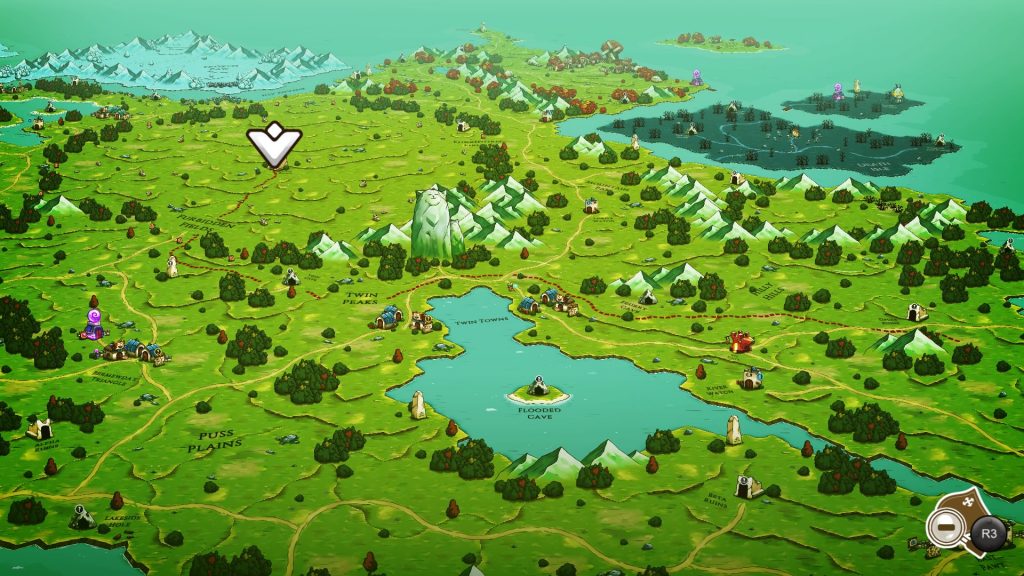 Along with this simplistic levelling up the weapons and armour you collect have a similar simple system. Weapons are mainly dished out as quest rewards and if you get a duplicate then this combines with your existing item to level that up a step. Whilst this may lack the depth of crafting or upgrading found in other games the streamlined offering here really works to the games favour.

Cat Quest is a good game. It is easy to pick up and play and offers an enjoyable and idiosyncratic cat based RPG. It has done a great job of offering a streamlined humourous RPG Which is accessible  for all. Where it falls down is when the simplicity goes too far, resulting in samey combat and repetitive quest structures. But these faults are easily overlooked  as the rest of the game is so darned cute.

Cat Quest
8 Overall
Pros
+ Really accessible RPG.
+ Great sense of fun and humour throughout.
+ Looks great, with bright colours and clear design.
+ Cats are great.
Cons
- Sometimes the simplicity goes to far removing a level of depth other RPGs have.
- Combat isn't very deep and becomes repetitive after a while.
- If you don't enjoy cat based puns there is nothing here for you.
Summary
Cat Quest is a good game which is easy to pick up and play offering an enjoyable and idiosyncratic cat based RPG. It has done a great job of offering a streamlined humourous RPG Which is accessible for all. Where it falls down is when the simplicity goes too far, resulting in samey combat and repetitive quest structures. But these faults are easily overlooked as the rest of the game is so darned cute and fun to play.