Cake Bash comes to us from Gateshead-based dev High Tea Frog and publisher Coatsink.  High Tea Frog is made up of ex-Ubisoft Reflections alumni who’ve worked on the likes of The Crew and The Division amongst others.

So you might expect something of the same sensibility from this, their debut title. What we’ve actually got is a four-player party game with bots to make up for any human players you’re lacking. As well as local couch based multiplayer, Cake Bash has internet play options too. 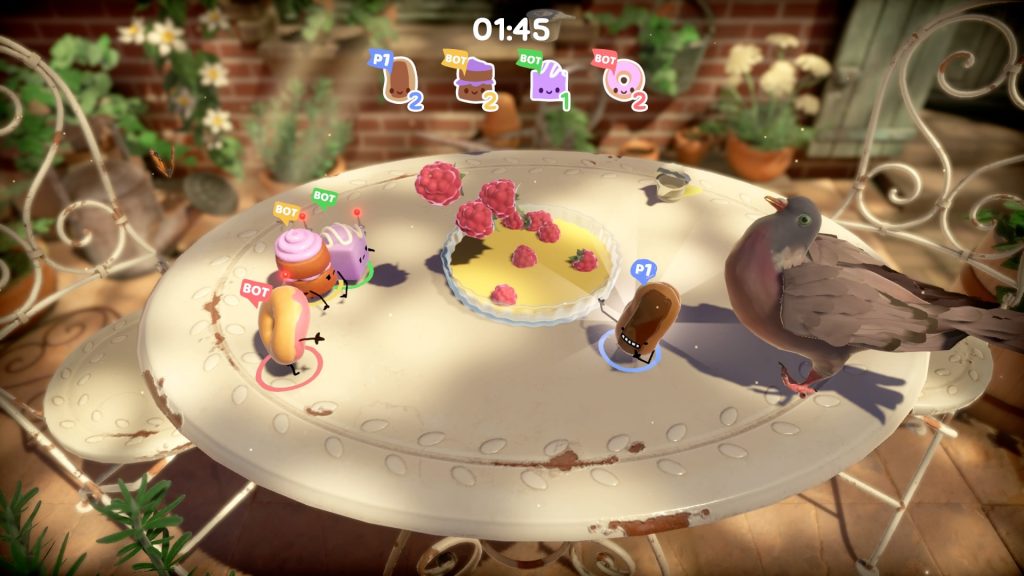 As the title suggests, this is cakes going at it. But as opposed to the rather niche small child bashing up a cake for their first birthday, this is actual cakes fighting one another. Hey, we know several professional photographers, that’s an actual thing.

The UK based development team has led to the sorts of cakes you might expect to see in shops over here, so perhaps unfamiliar to US audiences. Fondant fancies, eclairs and glazed ring doughnuts are some of the seven archetypes that you’ll start with at the outset. For once, trophies play an integral part to your unlocking other skins of the cake types. 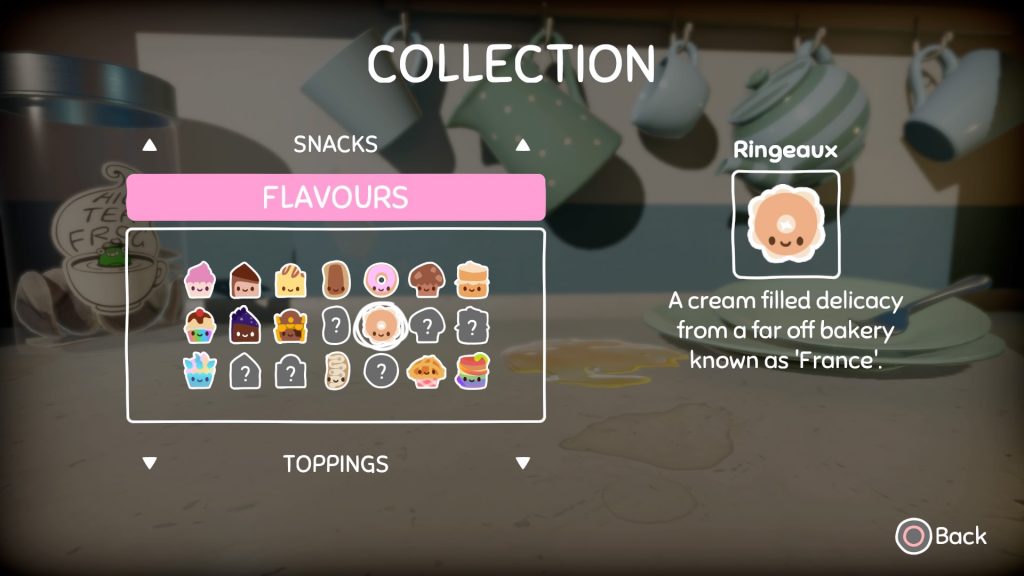 You see, the pace of Cake Bash is such that you’ll be thankful of a cake that stands out from the other three. The action can get very hectic at times so a clear sight of who you’re controlling is very helpful.

The main game mode is called Get Tasty. This is structured the same way each time, firstly snack minigame types, then bash minigame types followed by a section in which you buy toppings for your cakes. This avoids aping the likes of the Mario Party series in terms of the arbitrary nature of stars being your primary currency for how you score.

There are four themed sets of toppings for you to unlock. Initially they’re all pretty flowers, butterflies and their ilk. The remaining sets are chocolates, then gummy parts and little icing creatures. Unfortunately you’ll only know which set you have available in your Get Tasty session once you’ve played one bash game, rather than at the outset. 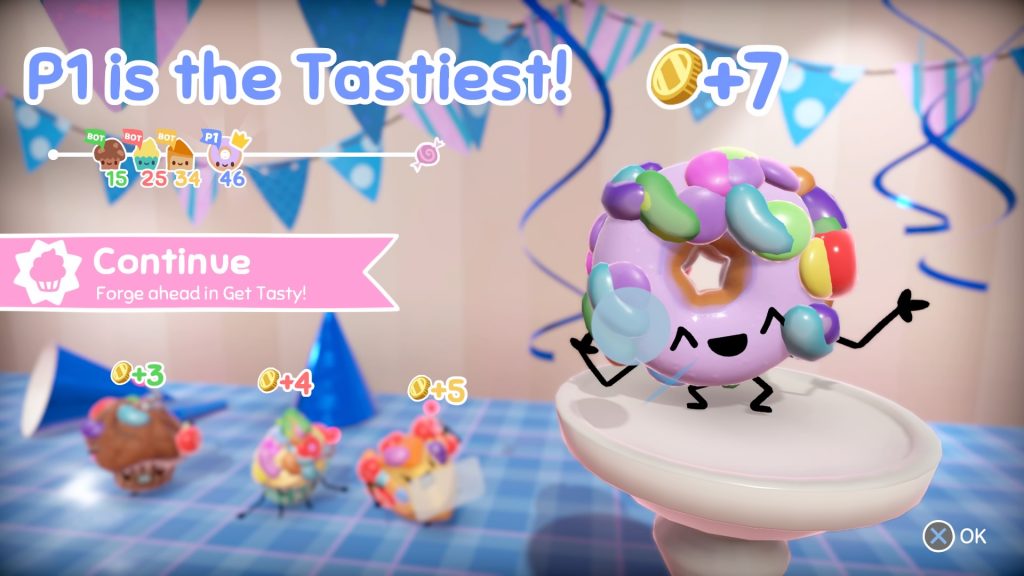 The structure goes bash, shop then snack, bash, shop. The last three are repeated twice again until a final score tot-up where you’ll see whether you’ve won or not. The currency you have in the shop is entirely dependent on your performance in the preceding games. First place garners you seven coins, second five, third four and last a paltry three. The toppings are priced at four or six coins each, so it’s essential that you do well if you want to buy toppings. 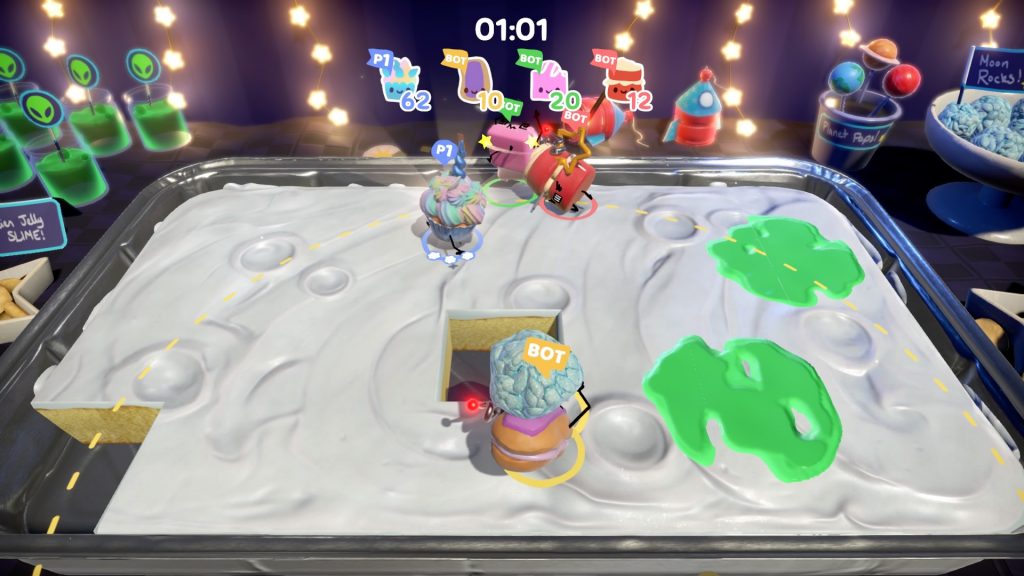 In addition, you’ll get a bonus if you combine three of the same topping. a Haribo style cherry being one example from the gummy set. If you run short on currency you are best leaving it until the next shop in the hope you get more from minigames. You can take a chance on a lucky dip that will garner a cheap topping for just two credits, but there’s also the risk of getting a negative scoring item such as stinky cheese or a fishbone. Not what a client wants on their cake anyway. 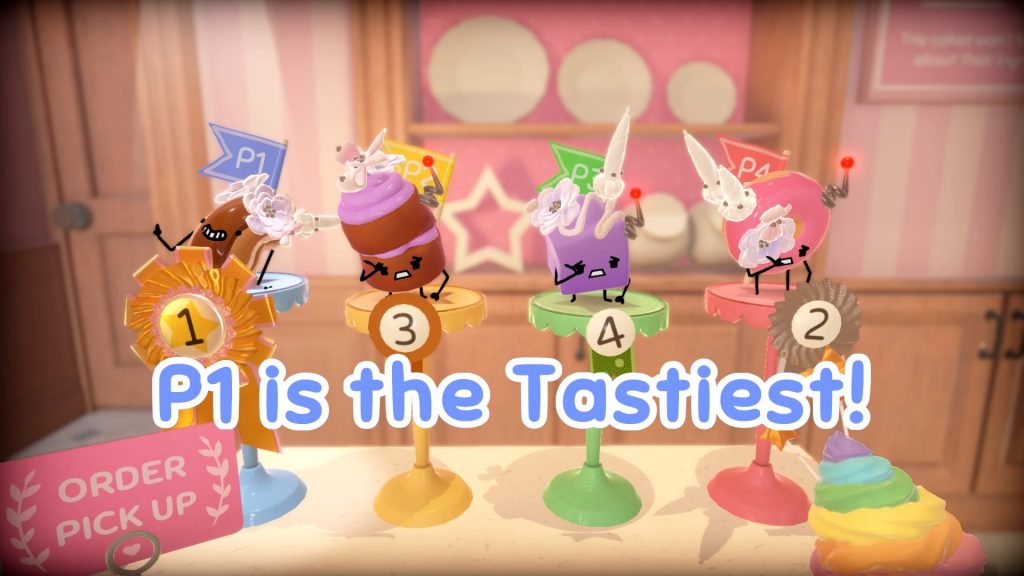 There are twelve minigames in all, five bash games and eight snack games. Each type has highlights, just as some don’t work so well. With regards bash games Cookie Bash is a good one, whereas Sweet Victory is occasionally very frustrating. Especially when you can have victory snatched from you at the death. Highlights of the snack games are Campfire where you toast marshmallows and Bakewell Ballet where you fling fruit into large flan cases that move across the screen. The not-so-great games are Wasp Attack (too imprecise) and Caterpillar (far too luck based), moreso against AI opponents. 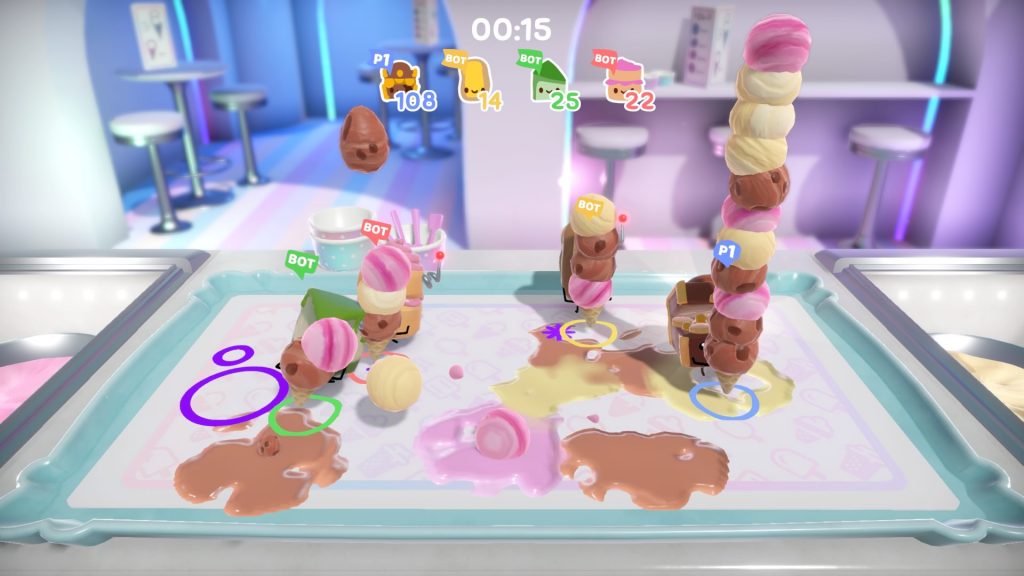 This is true of any minigame collection, but as is often the case, Cake Bash is much better playing against humans, either locally or via PSN. Amusingly you can either play in a friends lobby or via ‘Matchcaking’, though at the time of writing the day after release, lobbies are frustratingly sparsely populated. 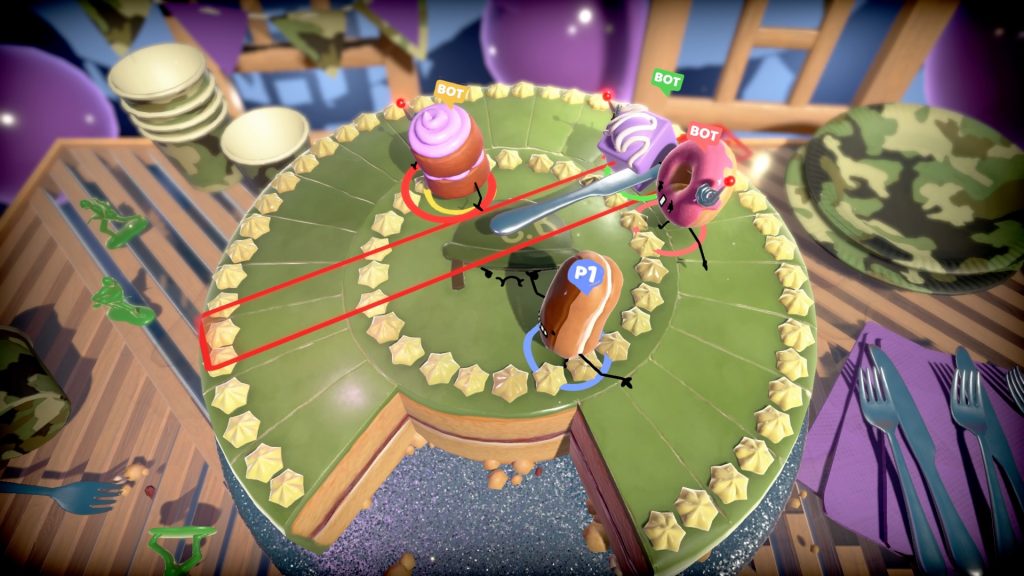 We can’t help but feel that this deserves a similar audience to Fall Guys, it’s that much fun. Hopefully people will realise this is a proper laugh and it’ll be a mainstay going forward. It might not supplant the likes of Gang Beasts, more complement it. It’s well worth picking up some cheap wired controllers for the purposes of playing this with friends. Our resident co-op partner had lots of fun playing this with us, and for once we didn’t have to explain too much for him to get stuck in. As you can see, the graphics are very bright and breezy and fit the mood. As such it’s very family friendly and the almost anthropomorphic cakes are well realised and make us want to eat them.

In conclusion, Cake Bash is a great party game that is sure to be a highlight in our home this winter. Pick it up too and you’ll be rewarded.

Cash Bash
8 Overall
Pros
+ Bright and breezy design and well realised cakes
+ Good variety to minigames
+ Excellent scoring system structure
+ Who doesn't like cake?
Cons
- Some minigames are just that bit too luck based, especially against AI
- Online lobbies are sparsely populated at release
- Bots can be frustrating to play against
- Might not get the audience it deserves, though we really hope it does

Summary
Cake Bash is a delightful party game with a good variety of minigames and unlockables. Couch based as well PSN multiplayer is a given, this deserves to be played by many.