There’s a reason that there are so many Need for Speed games, it’s ridiculously profitable for EA with each iteration selling bucketloads each year which answers the most obvious question ‘when is Burnout coming back?’ and until now, that wasn’t going to happen.

However, with Need for Speed: Payback getting caught up in last year’s loot box scandal (despite being a very entertaining game once Criterion adjusted it and fixed the player progression), it was time for a quick win and a remaster of 2008’s Burnout Paradise seems like just the thing to get the fans onside but can a ten year old game still cut it in the 4K age?

Having spent a frankly ridiculous amount of time on the original, unlocking everything and playing it online with friends for the best part of a year, this remaster felt comfortable and reassuring right away.  From the opening strains of Guns ‘N Roses’ Paradise City (a song that the game actively mate me hate after hearing it hundreds of times) to the enthusiastic commentary of DJ Atomika, being back of the streets of Paradise City felt almost like muscle memory, like I hadn’t been away. 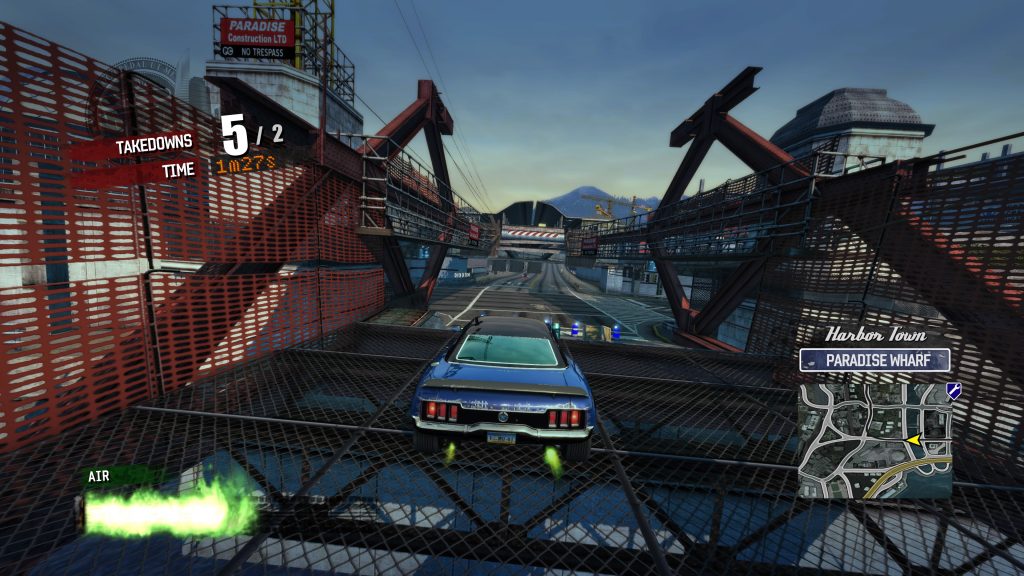 For those of you new to the game, this was one of the original open world racers, back when people didn’t really want their racing games to be set in living, breathing cities.  However, the game won everyone over back in 2008 by giving you the freedom to do what you wanted.  Every junction acts as the starting point of an event, be it a race or something more interesting like stunt events or ones where your main aims are to either take down other vehicles (by shoving them into walls or other cars) or avoid being taken down by sturdy muscle cars that will chase you down like a paparazzi looking for Princess Diana photos.

If you fancy a break from the competitive stuff you can just idle around the city, looking for billboards and gates (these act as the game’s collectables) to smash through or just look at the lovely scenery.   These choices also applied to the game’s online mode where you and up to seven other players could take part in races or co-op challenges that asked you to all get to certain locations and then piss about doing jumps, barrel rolls or various other minor but fun tasks. 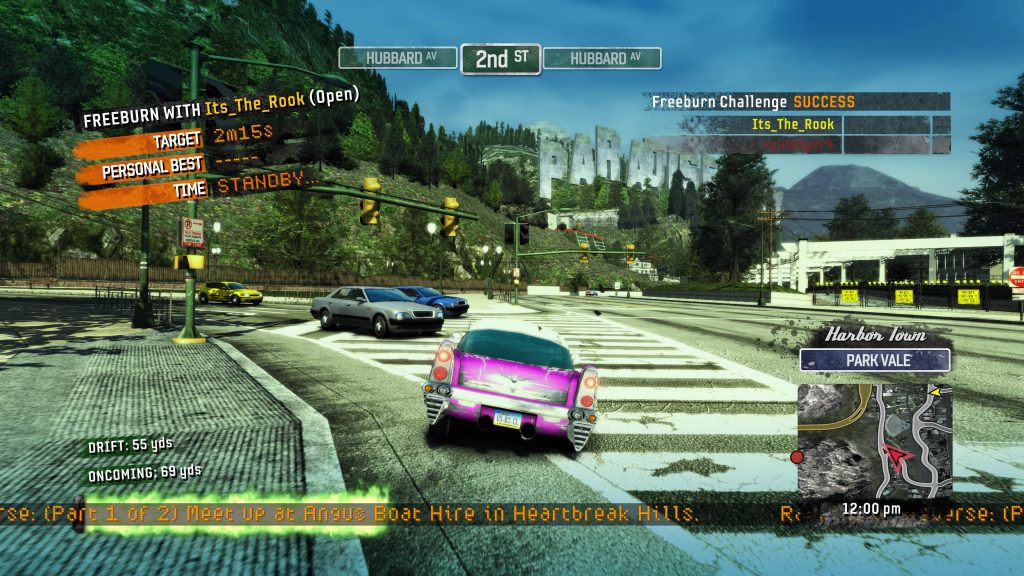 With no story to worry about, and therefore no Fast and the Furious style Chad Protagonist types taking down criminal organisations by winning street races, the game just felt like a brilliant playground where you could race at breakneck speed or just dick about.  Also, despite having some distinct areas such as the city, the beach, construction sites, a highway, a fancy lakeside area and the mountain region off to the west, the actual game world was reasonably small which is exactly how we like our open worlds.  Pack it all into a nice small area, don’t give me 50,000 square miles full of fuck all like I’m playing Far Cry 2 or something.

The remaster doesn’t change a thing.  This is the same game, the same world and it feels great.  The world is easy to get around, packed with stuff to do and it all looks great on modern TVs.  Even the soundtrack is the same and, unlike most EA game soundtracks, it’s a good mix of decent tunes, some throwaway indie and a bunch of classical pieces.  And to sweeten the deal, all the DLC has been included from the off. 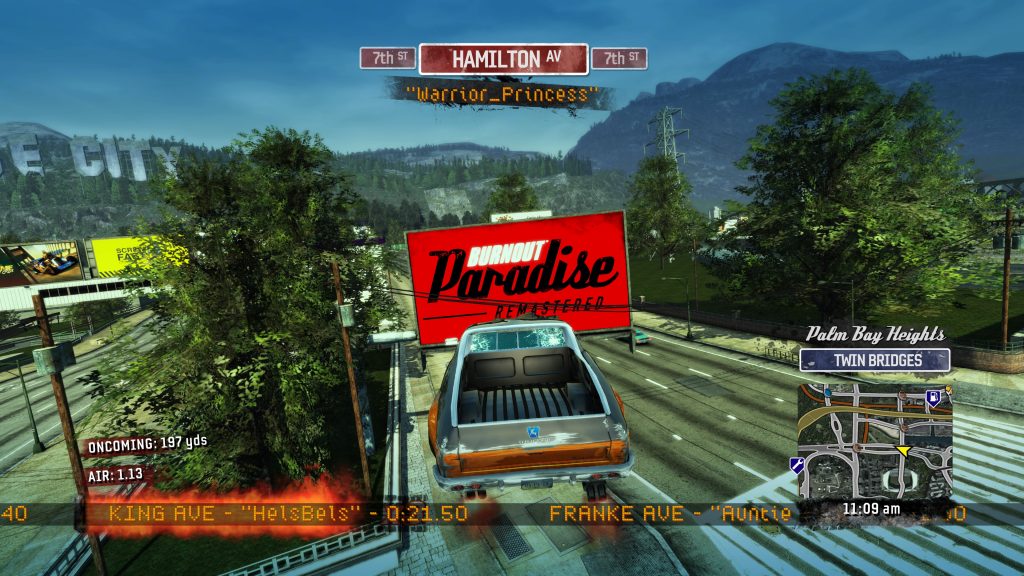 What first strikes you about the game is just how fast the racing is.  We’re not sure any game has matched the Burnout series for speed and it is all genuinely exciting with cars weaving in and out of traffic, inches away from the crumpling carnage that the series is known for.  This is racing at the edge and it’s great, especially when you’re close to the end of a race, desperately trying to get first place by going full speed through oncoming traffic.

One of the most fun parts of the game, and something that is sorely missed since Burnout went away, is the showtime mode.  This is essentially the Crash Junction mode and is instigated by pushing the

buttons.  From this point you’ll be in a crash and will need to steer your wreckage into traffic in order to rack up points.  Given that some ex-Criterion devs recently made a whole game out of this (2017’s Danger Zone), you can tell its something that Burnout fans loved about the series and it is still immensely satisfying to play.

While the remaster doesn’t add anything new to the game, there are a couple of interesting decisions that Criterion have gone with.  Firstly, they’ve really simplified the trophy list.  You no longer need to find every collectable (half will do) and they’ve removed a lot of the online grind, most notably getting rid of the trophy for making fifty rivals (a true chore) and reducing the number of online challenges that you need to complete.  The only ballache trophies now are for getting eight online players to meet in the baseball stadium and for riding ten miles on a motorbike in an eight player game, which is like herding fucking cats at times because people like to leave lobbies all the time, scuppering the trophy.  The game’s broken lobby system really doesn’t help matters either (although EA are aware of the issue so hopefully a fix is coming). 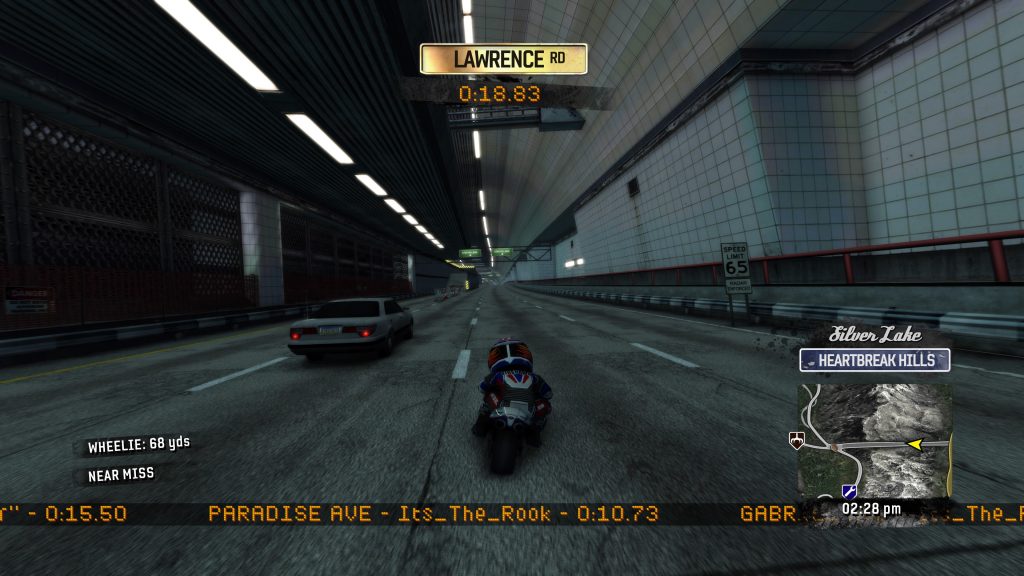 Also, there are no microtransactions in the game.  Which is good for gamers and also for EA (who probably would have had their execs hunted down like dogs if they’d fucked up this remaster) and with all the DLC being included there really is a lot of game here.  That said, the £35 price tag stings a little and seems to be the main reason why my whole friend list isn’t playing the game right now.

Some of them are though and Burnout Paradise remains one of the most fun online games you can play, racing or otherwise.  From hapless attempts to land the super jumps in the airfield, driving backwards through oncoming traffic and trying to rack up barrel rolls on the beach, this is a game you can, and will, lose hours to.  Especially when you start playing around with the ridiculous number of vehicles the game offers, including legendary cars (which are fun rip off versions of classic film and TV cars) to toy vehicles.

On the negative side, you still can’t restart races easily and fans of modern racing will be wondering why you can’t use a sat nav to plan your route (although we like the fact that you need to figure out your own routes) but these are minor niggles that we can live with, especially as the world is small enough to become familiar with and start learning routes.

The DLC included ranges from excellent additions such as Big Surf Island which is an additional part of the city full of massive jumps and new events to the less interesting motorbike and party mode DLCs.   It all warrants inclusion though and does fill out the overall package and while this generation of Need for Speed fans may find the lack of story off-putting, this isn’t a game for them.  This is a game for fans of arcade racing with an emphasis on fun and that’s what gaming should always be about.  In this age of moody indie games about feelings and online shoot ’em ups that expect you to understand like three different currencies and a bunch of classes, Burnout Paradise Remastered‘s focus on speed, fun and carnage is exactly the sort of game that will drag you out of any gaming funk and will put a big, dumb smile on your face.  Please take me home, Criterion.

Burnout Paradise Remastered
9 Overall
Pros
+ Great fun, on and offline
+ Tons to do
+ Looks and sounds great
+ Tremendous sense of speed
Cons
- A bit pricey
- Can't restart races
Summary
This, ladies and gentlemen, is why Burnout is still the best.