Couch co-op might not entirely be the best thing in mind during a pandemic. Still, there’s plenty of people stuck indoors, potentially with family, friends or flatmates so games of that ilk might see some joy. One such game is Bonkies, a cooperative building game that oozes charm but maybe lacks a bit of staying power. Studio Gauntlet is at the helm. 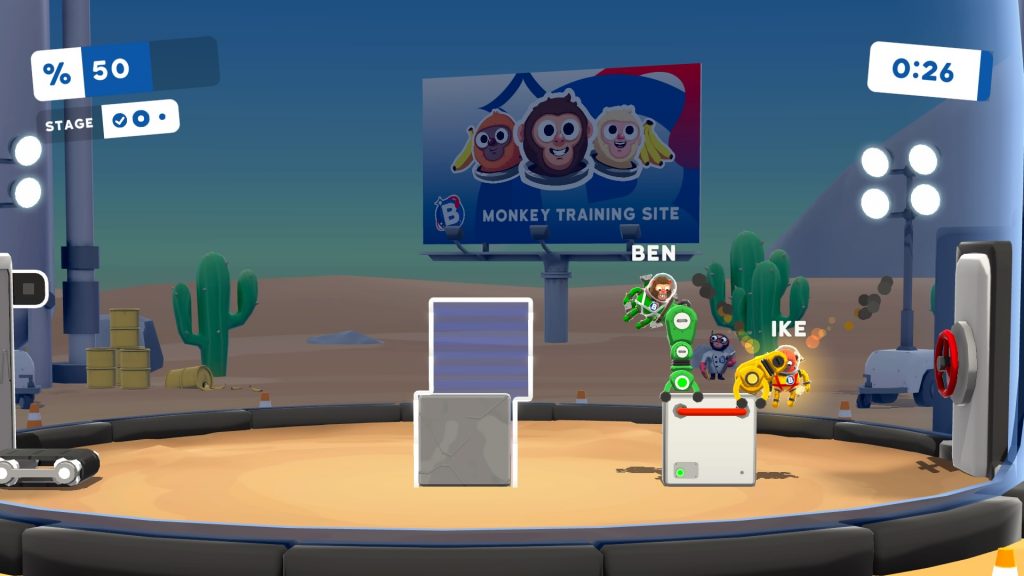 With something of a space motif, Bonkies’ loose narrative is one of discovering the solar system. You and your compatriots will venture from planet to planet, completing challenges as you go. The concept is kept fairly simple. You’re given an outline when each level starts and your cosmonauts have to work together to build a structure to fill that space.

Most levels come in two or three stages and are scaled to how many people are playing. I believe Studio Gauntlet have intended the co-op campaign to be completed by at least two players, so you’re not on the hunt for larger parties. Every object has to obey Bonkies‘ laws of physics and that adds some chaos to the coordinated building efforts.

You move and lift blocks using your monkey’s robotic arms. By default, you use the face buttons to direct these arms but there is an option for analogue controls. It gives you a little more finesse but I felt I never needed it. The right shoulder button grabs blocks and your left shoulder button activates your jetpack. This allows for some extra juice when picking up heavy objects. You can also stabilise a load with X. This helps keep cargo in a steady position as you look to build whatever is asked of you. 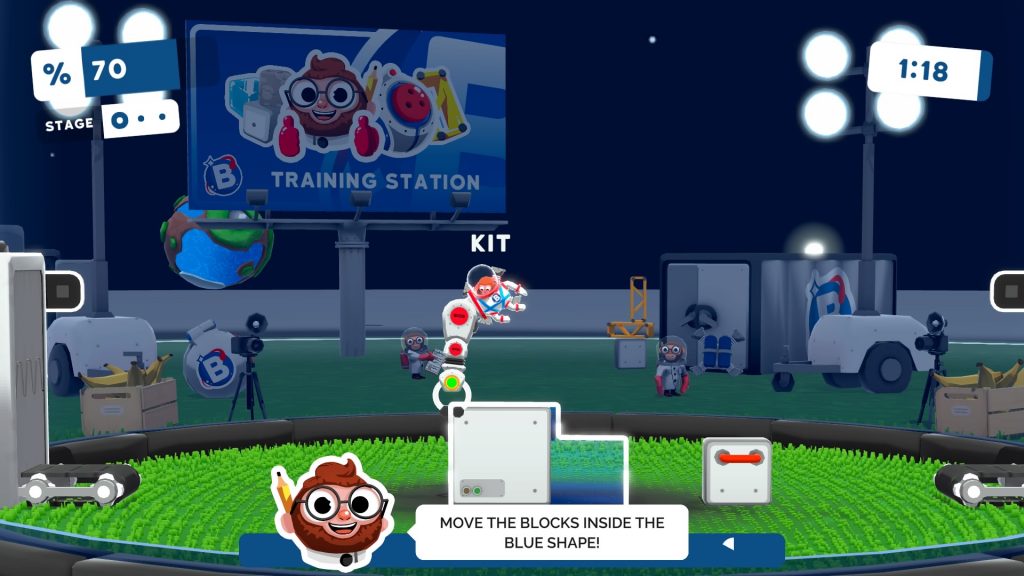 The builds you’re given aren’t especially complicated but the added complication of working together and an ever-present time limit does give each stage some stakes. I do feel the time limit feels unnecessary but this does allow for par times to earn bananas. These allow access to other characters and cosmetics. I wouldn’t say these time limits are strict but collapses of structures can lead to levels being restarted. Sometimes setting everything back up can feel too much effort, even with an extra pair of hands. On top of that, I don’t feel bananas lead to worthwhile rewards.

When it all comes together, Bonkies is a decent co-op experience. The stages do increase in challenge and the introduction of moving parts give players new things to consider. Most of the time, you can split up and perform different tasks but there’s instances where one player has to hold the fort. When constructions lead to some dangerous overhangs, you might have to erect scaffolding or task someone with holding the precarious blocks. 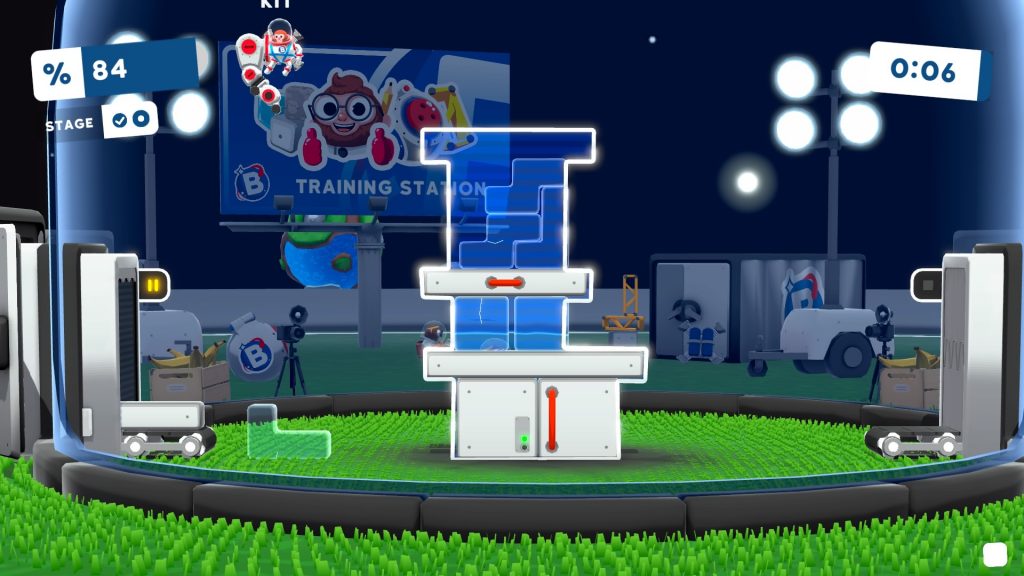 I do like how the campaign introduces objects in a relatively slow and straight-forward manner. You’ve always got something new to see and the solar system’s got a decent length to it. It’s a shame you can’t tackle the levels in a more free-form manner. You might only have two levels available to you at one time. It does box you into tackling levels in order. If you’re frustrated with one stage, you don’t have many other options.

If co-op does start to wear thin, there is a single-player component. This composes of a short training area and a single planet. It’s clear that this is designed as an appetiser. Whilst the levels have some interesting tricks, the size of it can make solitary players feel a little left out. Without the cooperative element, Bonkies becomes more of a brainteaser. I enjoyed it but it played second fiddle to the more substantial co-op experience. 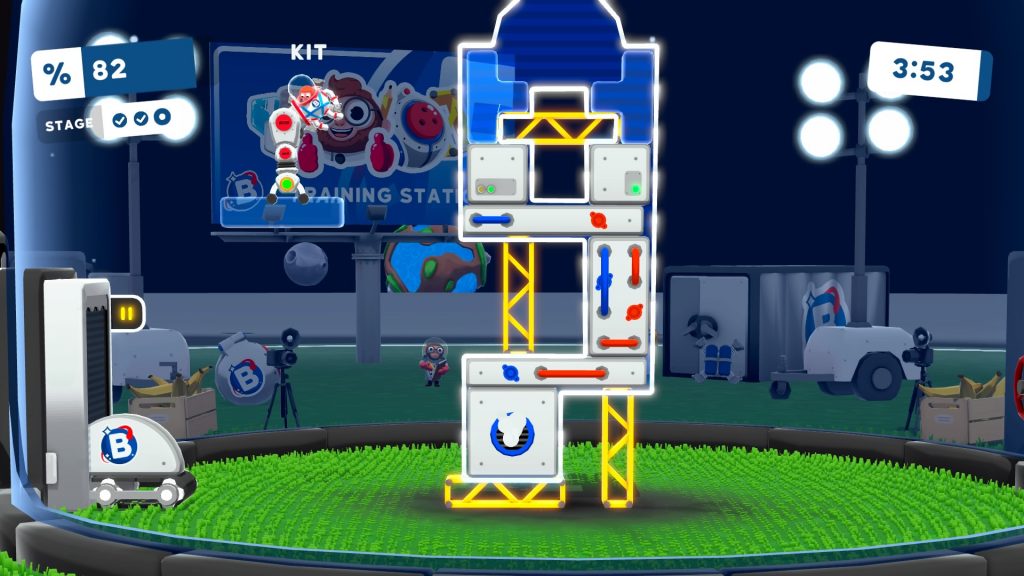 Presentation has a light, cheery space travel motif. It’s cheeky with some charming little characters introducing each planet to you. It’s colourful and sets a light-hearted tone whilst the music also plays a part. Your chips screech in times of peril and overloaded jetpacks result in some great moments of calamity. The physics maintain a consistent feel and, overall, Bonkies handles the presentation well.

It’s a shame this was restricted to couch co-op as it does limit your options in trying times like these. SharePlay is unpredictable so you really have to commit to Bonkies if you’re living with other people. As a mostly solitary gamer, the single-player component doesn’t have enough to justify the purchase. As a cooperative experience, it’s a decent time. There isn’t much room for grief and I feel the time limits are unnecessary, but there’s a fun opportunity here to build your way through the dozens of levels.

Bonkies
7 Overall
Pros
+ Responsive, simple controls.
+ Enjoyable in co-op.
+ Varied stage design.
+ Charming presentation.
+ Scaling difficulty to the number of players is a smart decision.
Cons
- Time limits add some unnecessary pressure.
- The single-player content feels very slight.
- The campaign structure feels restrictive and limiting.
Summary
Bonkies is a solid cooperative effort. Story and presentation is kept light-hearted and the building doesn't feel hectic enough to ruin friendships. Some of the stages are kept fairly straight forward but the increasing complexity of the campaign does give a crew enough to consider. It's a shame the levels roll out in such a linear fashion and I do feel the time limits are an unnecessary addition. Solo players will feel short-changed but Bonkies feels good with friends.