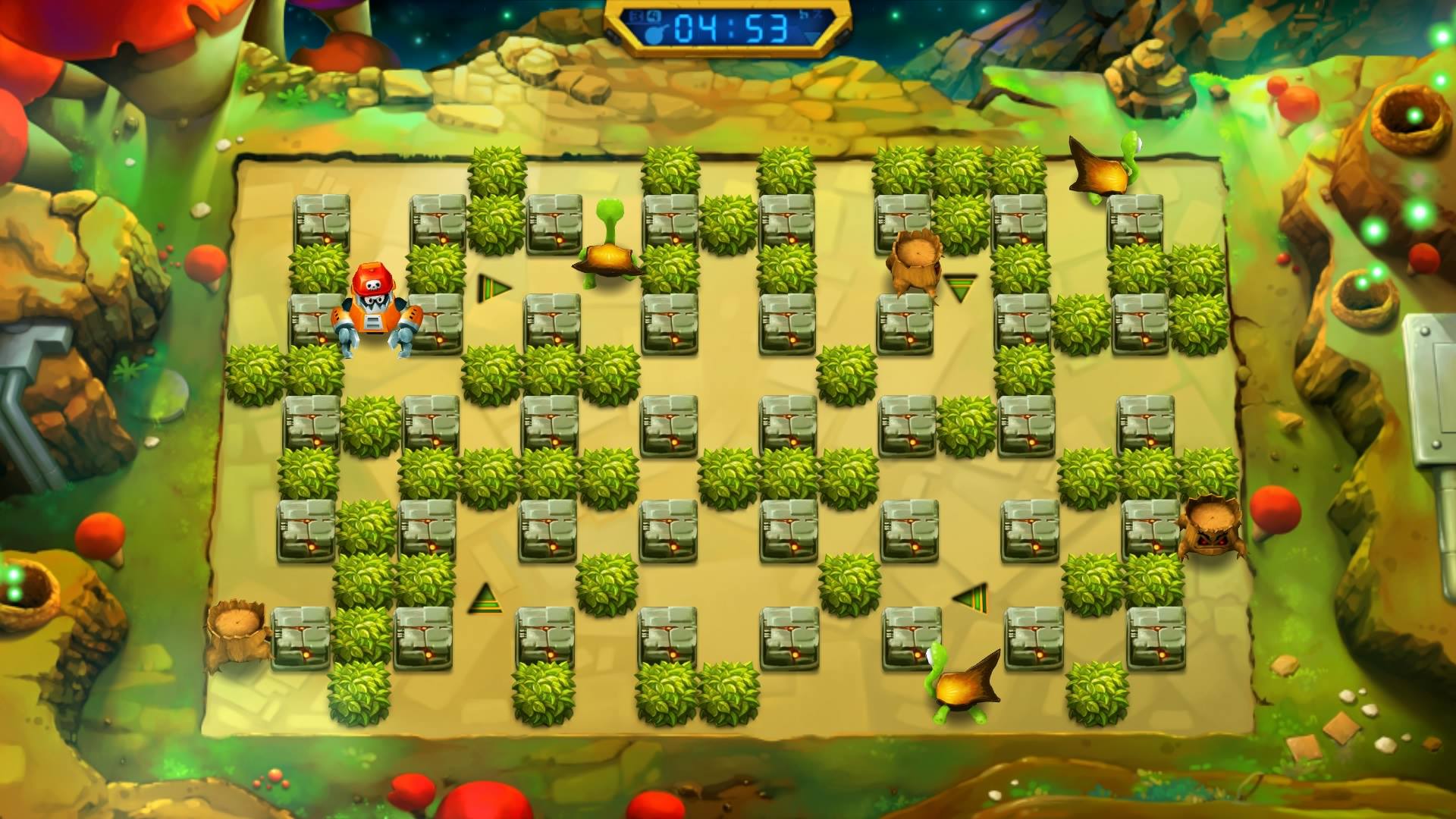 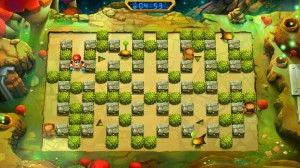 Ever since the days of Tetris there has been a hard and fast rule. If you have a popular idea that makes it to print then you had better get used to the idea of people copying this idea with varying degrees of subtlety. So for every Angry Birds you will get Pandas Vs Ninjas, for every Mario you will get Giana Sisters and for every Bomberman you will get Bombing Busters.

Bombing Busters has to be the most shameless example to this fact I have ever seen. Generally as a rule clones do their best to distinguish themselves from their chosen counterpart and Busters tries to follow this template, but stumbles after the characters and art direction. You play as a relatively non-descript robot with a vaguely pirate look to him and bar this description there is little else to say, the character is about as bland as they come. There is another character by the name of Dr Wallow who serves only as a 2D tutorial cutout and as a completely unwelcome voice over during gameplay, uttering timeless phrases such as; “happy death day to you” and various other quips featuring bombs and dead things. Gameplay wise I have struggled long and hard to find a better way to describe this but unfortunately this has stumped me. To sum it up in a sentence; It is Bomberman, but whenever you stop moving there is an annoying “ding.”

This audible “ding” is one of the most annoying things I have ever experienced in a video game. This is the same sound you hear whenever you flick through the main menu upon startup of the game and where you should expect it to stay. It may sound nitpicky but let’s consider what type of game this is. In a hectic Bomberman match you have to move and stop constantly to survive, especially if you are one of the players left standing towards the latter end of the match. Now picture that with four people playing at once. That is a lot of dings. The only way to get rid of this constant annoyance is to turn the sound effects off, meaning you can’t hear the bombs go off or the sound of a bomb being thrown near to your character, which would be pretty handy to hear. This issue has been noted as a glitch in response to some comments about it, but at the time of the review this has not been fixed. 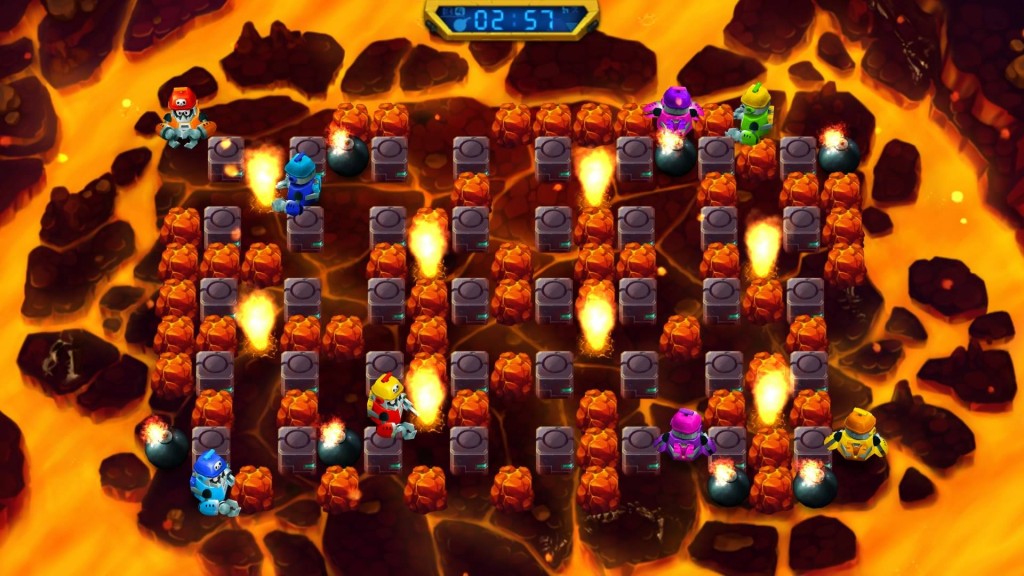 Bombing Busters has two main modes, adventure and battle. Adventure mode takes you across several different themed worlds to bomb creatures of thematically pleasing design. Basically this means that you will be fighting tree like enemies in the forest world and bombing flame styled enemies in the fire world. This is an entirely passable mode that features incredibly tough enemies; by incredibly tough I mean they can avoid bombs like girls avoided me at school. It’s bloody uncanny. Your robot will die countless times just trying to pin down these creatures and being clipped by them wondering into it, time and time again. When the game has a hint on the load screen that suggests that “If you get frustrated, why not stop playing for a bit” then there is a chance that the difficulty has been set a little too high. These enemies don’t just turn up towards the end of a chapter, these bomb dodging critters turn up on level two!

Onto battle mode then, the real meat and bones of any Bomberman game or clone. This is your multiplayer mode which can be played locally and…well. You are supposed to be able play this online but the lobby selection menu is either barren or completely broken. When trying to search for an active game I am met with an entirely empty menu and when trying to start a lobby of my own it kicks back an error message making the entire endeavour fruitless. So if you are like me or most PS4 users who have ditched friends in favour of satisfyingly anonymous online play then this game is not for you. However if you are as old school as this game wants to be and can coax up to three of your friends around to your place for a local session then I would say this game is pleasingly functional.

All of the Bomberman staples are present in this mode. Chase your friends around in a themed maze of your choice, placing bombs and nicking pickups. All of which can be found in Bomberman, with little to no difference in function, with little to no artistic license used to even change the icons. Get the flame icon to increase the range on your bombs, get the bomb icon with the up arrow to increase the amount of bombs you can drop and pick up the boot icon so you can kick bombs at your enemies. On certain levels you get special hazards such as arrows that litter the ground that divert bombs that are kicked into them. It’s all very samey. 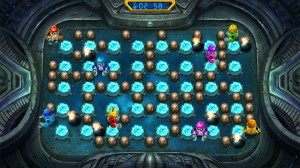 Speaking of samey there is the soundtrack. Each world has its own background song and this should be exciting but unfortunately again this is not the case. Each song is a bastardised rendition of a classical anthem. Expect to hear a “jazzed up” version of Sugarplum fair every time you drop into the forest arena or Night on Bald Mountain for the fire stage. It is entirely forgettable, mainly because you will be hearing “Ding Ding Ding” over it at all times.

Bombing Busters
3 Overall
Pros
+ It plays like Bomberman + Local Multiplayer works and emulates the bombing arena multiplayer well enough
Cons
- Awful, non user friendly menu screens - Uninspiring characters and world design - “Ding”
Summary
Everything about Bombing Busters feels like it was ripped directly from an Android app clone of Bomberman, shoddy menus and all. There is little else to redeem it apart from the fact it plays like Bomberman, this does not excuse the presentation or lack of design or style. On other formats this game is known as Bombing Bastards and I feel this sums it up quite nicely, it certainly does feel like a bastardisation of a formula that is loved and revered by fans and critics alike. Make like the one eyed turtles on level two and avoid this.