PSN isn’t exactly short of 16-bit style shooters and so it can be hard to get too hyped about one but Blazing Chrome by Brazilian coding shop JoyMasher is one such game that has gained some attention recently thanks to a decent trailer and what appears to be a fairly authentic look and feel.  You can probably tell from the screenshots that this is a 2D ‘run and gun’ shooter where you pick from one of two characters (more are available later on) and then run right, mostly, while blasting away at your enemies.

The game is a melting pot of very easy to spot influences.  Contra is the obvious one with the game sporting the same run, jump and shoot mechanics along with new weapons to pick up and big bosses to shoot.  If enemies get too close you’ll melee attack them which is a mechanic lifted from the original Shinobi but might give some gamers memories of Strider (you’re not quite as manoeuvrable though).  There’s a console-port flavour of Metal Slug too with that hand-drawn art style, albeit not as lovely, and some mechs to jump into (as opposed to vehicles but the effect is much the same) and I was heavily reminded of E-SWAT, Aliens (arcade) and Alien3 (SNES) at times too. 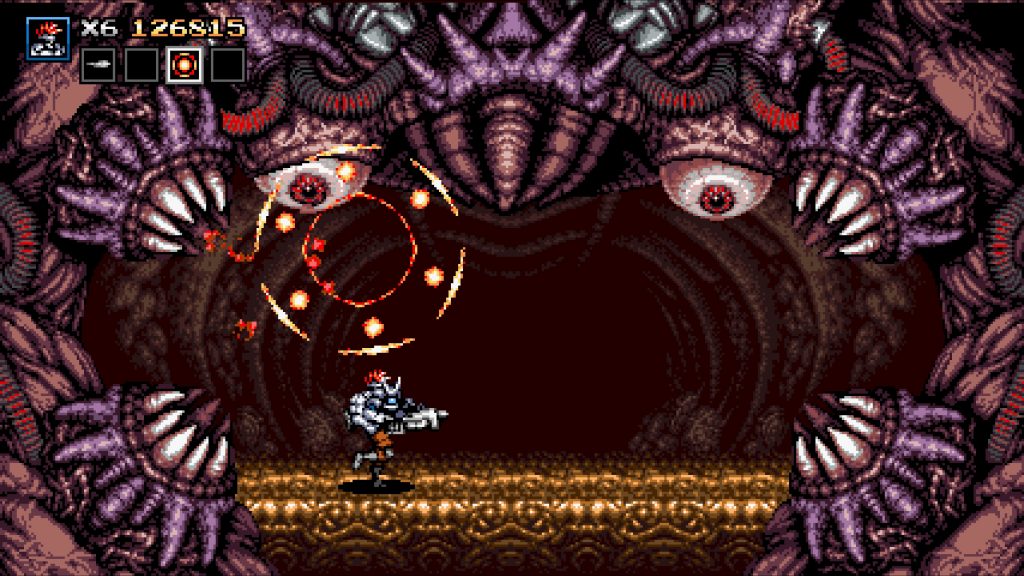 That is to say that this is run and gun by the numbers but that’s not a bad thing and initially the game feels pretty good.  You can run, jump and roll around and the controls feel very tight indeed.  The jumping, and double jumping, doesn’t feel very acrobatic but you can move around enough to do what you need to do.  You can press

to shoot or hold it to auto-fire.  Combining that with

will lock your movement, allowing you to aim without moving across any of the eight directions you are able to move in.  It’s a decent enough system.

Your triggers will select between whatever weapons you are carrying.  Much like Contra this is a limited selection and, first bad point, most of them are a bit of a chore to use.   I found myself returning to the precision, speed and auto-firing of your main gun.  The alternatives are a slow grenade launcher, an even slower pulse laser and a weird worm weapon which was a bit too limited in range to be useful.  This for me is a proper pet hate with shooters.  Make me feel powerful.  Don’t give me the equivalent of the fireballs in Ghosts ‘n’ Goblins.  Yeah, you know what I mean. 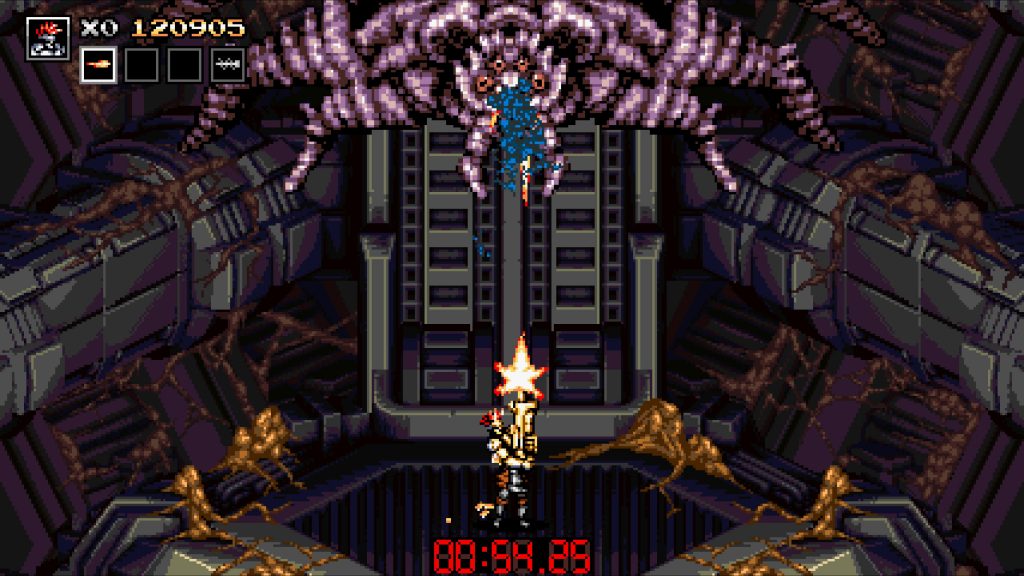 You can also pick up drones which give you a bit of extra firepower (good), two defensive drones (very good) or speed (never useful in these games) to aid you and you’re going to need all the help you can get because this game is hard.  We started on the default Normal difficulty and fucked that clean off during level two where we faced an onslaught of enemies that gave us fits and restarted on Easy.  That’s fair enough, these games are meant to be hard but as someone who 1CCed Contra, I wasn’t expecting to struggle as much with this game as I did.

The difficulty comes from either relentless numbers of enemies, attacks from multiple directions at once that leave you no room to evade or giant bosses with fairly dramatic moves that can wipe you out before you can even react.  As such this becomes a shooter that is as much about your memory as it is about how good your thumb/eye co-ordination is and if you like that kind of thing then that’s definitely what you get here. 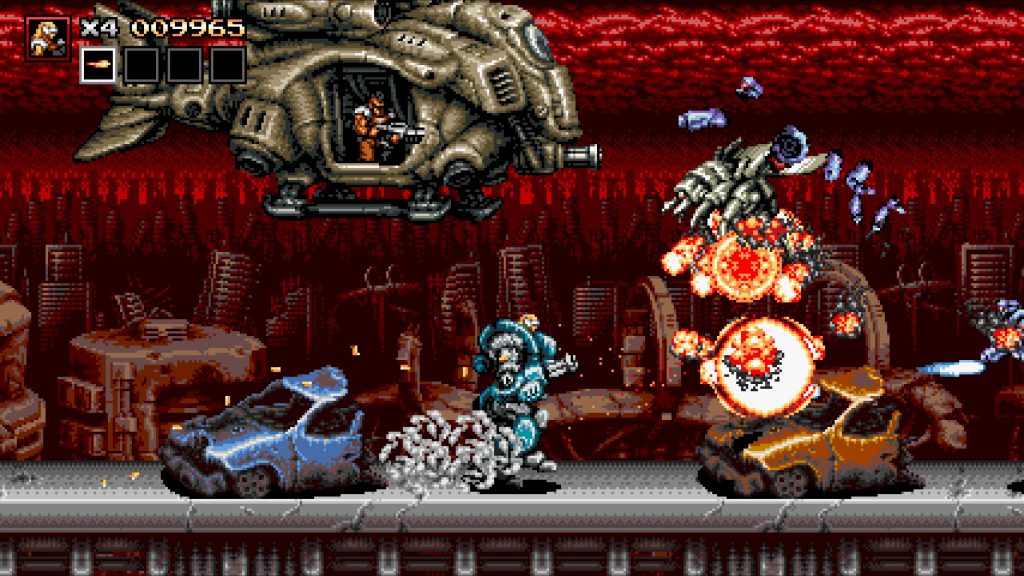 The game offers unlimited continues and Easy gives you seven lives but the game does like to chain together difficult sections and then book end them with a boss before smacking you down and making you try that whole part again.  You need to bring your ’80s or ’90s A-game with you if you want to get the most out of Blazing Chrome.  That said, I mainly tended to struggle on boss battles.  As with Metal Slug and, to a lesser degree, Contra these are pretty bullet-spongy and will test your patience just as much as your skill.

The game does try to offer some variation on its main theme with vertical and into-the-screen sections to break up the normal horizontal action or by putting you on a speeding bike thing.  Fairly normal stuff for the genre but certainly things that would have been appreciated back in the ’80s and ’90s.  Indeed that sums up the game.  If it came out then I think people would have really looked on it with a lot of affection.  Would it be as well received as Contra?  Who can say?  But it’d be a very solid title with lots (eight) of levels, some decent visual set-pieces and a ton of action. 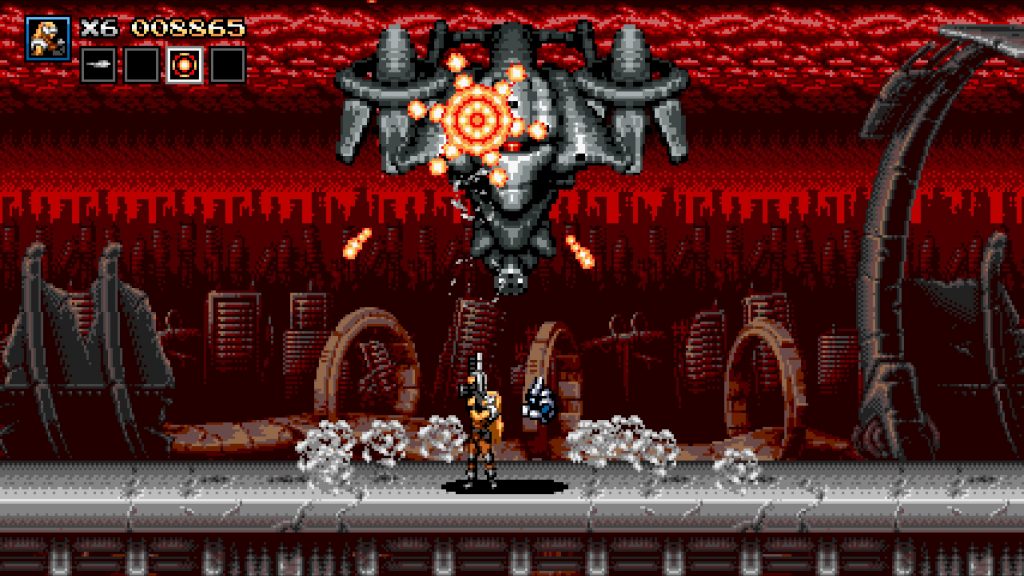 Blazing Chrome’s aesthetic is very ‘Sega Megadrive’ as opposed to looking like an arcade title or even a SNES game.  It’s certainly not going to be considered eye-candy now, especially as every other game does the whole pixel-art thing, but it looks fairly convincing, like a long lost console title and the very-excitable soundtrack also helps to keep the illusion going.  But here’s the thing, the game is clearly doing what JoyMasher intended and I imagine this will go down fairly well with retro-heads but is hard work to get through and has been kicking my arse since I fired it up and that’s maybe made it feel like a struggle to get through rather than fun.  I found myself in that common place where I was playing it because of the review and not because of the game.  But that’s like complaining about FIFA because you don’t like football.

Blazing Chrome is good and does a bang up job of essentially creating a new Contra game that looks and feels the point.  Sometimes the challenge outweighs the fun and the game doesn’t do well when it comes to the firepower you dish out.   It will no doubt find many fans but the fact that it didn’t quite convince my Contra-loving heart means maybe something isn’t quite right.

Blazing Chrome
7 Overall
Pros
+ Looks, feels and sounds like a good run and gunner
+ Good controls
+ Tries to vary things a little
+ If you want an old-school challenge, this has it
Cons
- Weapons are disappointing
- Maybe a bit too difficult
- Enemy placement and level design feels a little imperfect
- Bosses are a bit unfair at times
- More Megadrive/Genesis than coin-op visually speaking
Summary
Blazing Chrome does a really good impression of a Contra game but 32 years later, Contra is still king and that probably says as much about the granddaddy of run and gun games as it does about this very capable, but not quite as good, upstart. It will definitely have its fans though.