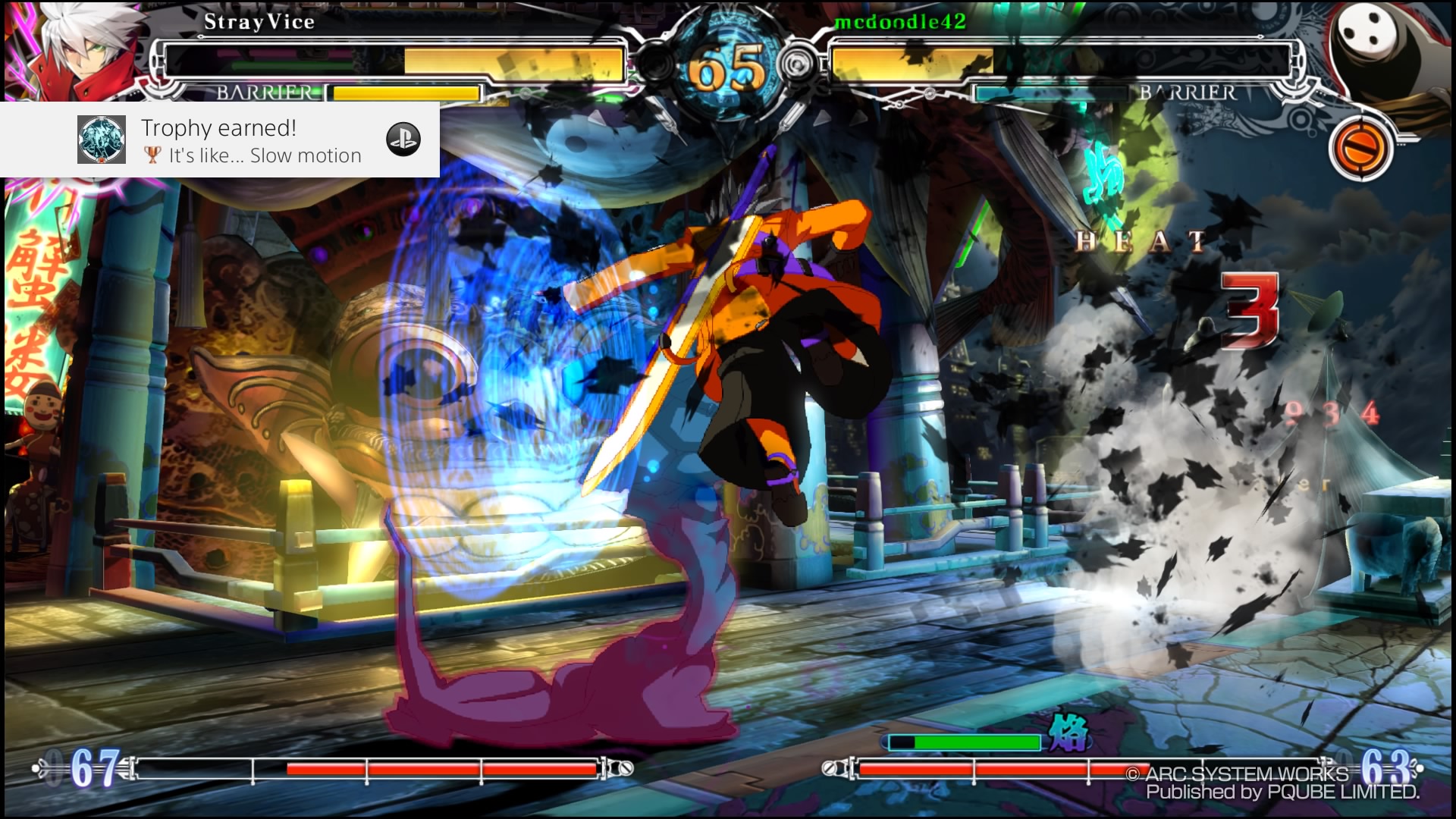 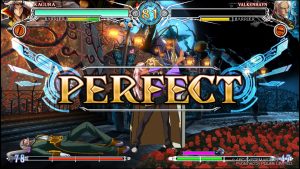 The beginnings of BlazBlue is rooted in Guilty Gear. When Arc System Works lost the rights to Guilty Gear, they started work on a spiritual successor that would channel the same insane speed and deep fighting mechanics that had made Guilty Gear so beloved among fighting game fans. Now, with Guilty Gear back in the hands of Arc System Works and returning to prominence as one of the most exciting and excellent titles in the fighting game community, it seems only appropriate that BlazBlue signs off in a blaze of insane and utterly brilliant glory.

With a roster of 35 characters taking the field, BlazBlue: Central Fiction is built to a scale of the sort the series has never seen. Each fighter is mechanically unique, wielding a drive that gives them a special ability that is all their own. Some, like that of Ragna the Bloodedge – the protagonist of the series – are passive. In the cose of Ragna, this translates to his drive attacks draining the health of the opponent and giving Ragna a small health boost. Others require a little more attention – like Litchi, who can control her staff independently, leaving it standing around the screen or spinning around her.

This lends remarkable diversity to the cast; each character fights in a style totally distinct from the others, and makes every fight an explosive experience that is seldom the same as the battle before. Understanding exactly how your fighter works is key, and understanding your opponent’s character of choice just as important. Once you do, you can put together satisfying and damaging combos that will leave your enemy short on health and reeling from the mental damage of watching you go ham on their favourite fighter.

Basically, BlazBlue: Central Fiction is a whole lot of fun to play. Unfortunately the creativity and diversity on offer can feel at times as though it is locked behind an execution barrier, but even if you’re only willing to put in enough effort to learn to uppercut, there’s plenty of fun to be had. In fact, BlazBlue wants to help you out; it gives you the option to choose between Technical and Stylish mode – and Stylish goes a long way towards removing that execution barrier. If you want to put in more time, and really get to grips with what a fighter is capable of, pick Technical mode and you’ll be getting as much enjoyment as you want from Central Fiction. 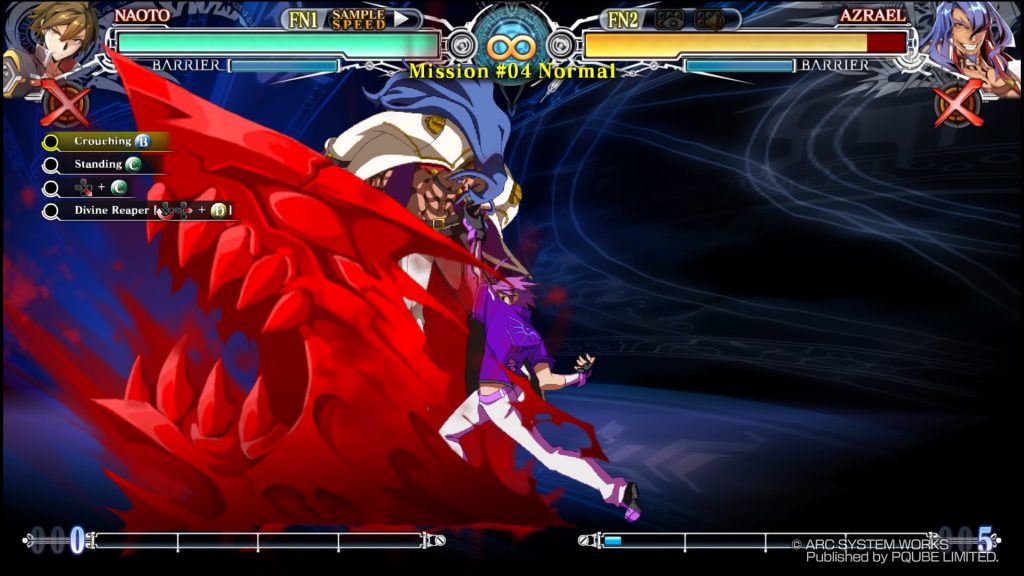 And if fighting against other people isn’t really to your tastes, there’s still plenty for you to do. The storyline that BlazBlue has built over the last three instalments is notoriously convoluted, but every effort has been made to to ensure that you enjoy the grand finale. Not only is the story mode peppered with gorgeous animations, but bonus material that will take you just as long to work your way through as the main tale. Regrettably there is no English voice acting – for the first time in a BlazBlue title – but the Japanese voice work remains fabulous, injecting plenty of emotion to the tale.

It’s impossible to succinctly summarise the story of BlazBlue, so it’s best to let Central Fiction do it for you. Before embarking on the final chapter of the story, you have the option to get a recap of three previous games. Over the course of half an hour, it sketches the bare bones of the story so far – and I was impressed that it took so short a time.

Between the main and sub plots that Central Fiction offers, there are more than 100 chapters of plot that resemble a virtual novel than they do a fighting game. It’s tough to wrap your head around at first, but once the tale gets into the swing of things, it’s a deeply enjoyable experience. There were even some powerful emotional beats, which I found particularly touching. 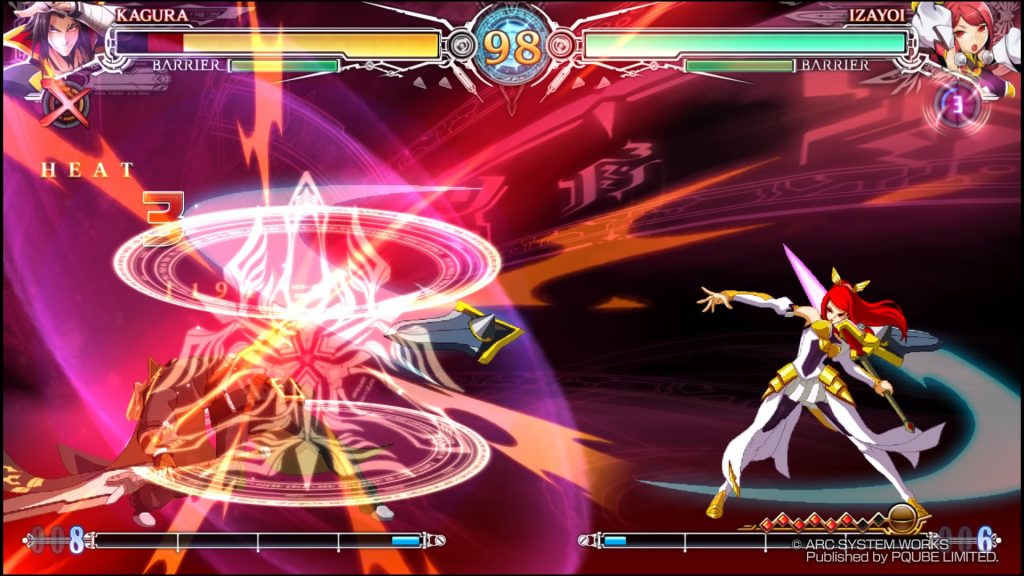 It’s not perfect however; alongside being a particularly lengthy and complex experience, it’s strangely short on actual gameplay. Stretches of half an hour or so when the only action required is to tap X every now and then aren’t uncommon, and actual fighting is so rare that it comes as a surprise – I even lost a few rounds trying to remember how to play the character I was fighting as. Even so, much of the combat is absurdly easy; none of the fights are particularly challenging, even at the supposed climax of the story.

Even once the story mode is notched off – with a special treat as a reward – there is a vast amount of single player to keep you occupied. Each character has an individual story mode, which work alongside the main story mode. That’s 35 extra strands of story to take in, each twining together to add further depth to the story and shading to your favourite characters.

Then there’s the other modes, like Speed Star and Grim of Abyss, which each tweak the core tenets of the gameplay and encourage you to reach for different victory conditions. Grim of Abyss is particularly interesting, as it sets you the task of clearing dungeons, allowing you to purchase power ups and grimoires to help you along the way. It’s fascinating, and completely changes the way that you view your resources. 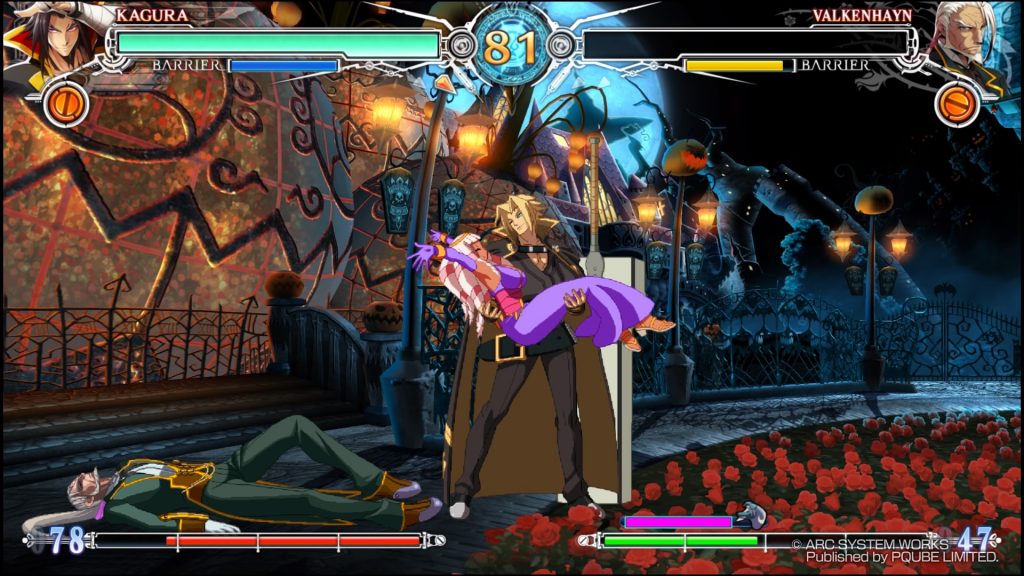 And when you finally decide to take the plunge and get some games in online, I have some bad news for you; you won’t be able to blame any crushing defeats on lag. The netcode of Central Fiction is truly excellent. There’s very little input lag, and only once or twice in the hours that I spent sparring online did I suffer from any really bad spikes in lag. Considering the importance of smooth and excellent combat on both ends, this is doubly impressive, as it almost feels as though your enemy is on the couch next to you.

There’s a handful of modes to choose from here as well – if you’re a fan of the internet points, there’s a ranked mode, but if you’re just in it to fight it out with your mates, you can create a private room in which to duke it out. There are a couple of others, but odds are that those two are the modes that will see the most use.

No matter what you’re looking for from Central Fiction, I’m willing to bet that you will find it. After sinking as much time as it takes to complete some modern day RPGs into the single player alone – don’t ask how many hours of multiplayer I spent getting my face beaten in, because answering would label me a masochist – I can honestly say that I almost feel as though I’ve barely scratched the surface. 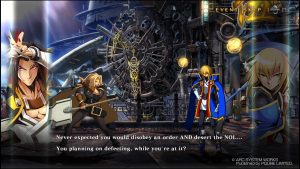 Better yet, those mountains of content are supported by genuinely excellent gameplay. It’s fun as all hell to just sit and play the game, whether you know what you’re doing or just want to have some fun. With such a wide variety of interesting and unique characters on offer, you’re bound to find at least one or two characters that you find fun, and with the option to pick stylish mode, it’s only a matter of time until you’re pulling some of the best looking combos around.

BlazBlue: Central Fiction
9 Overall
Pros
+ Fun, fast and fluid combat + A mountain of content to keep you engaged for the rest of time + An end to BlazBlue’s story that’s both sweet and bombastic + Brilliant netcode, for buttery smooth online play
Cons
- A complex and ultimately confusing storyline - Story mode requires minimal interaction from the player - Even with stylish mode, an occasionally high execution barrier
Summary
BlazBlue: Central Fiction is not just the end of the BlazBlue series; it’s a worthy climax to a quadrilogy that has been consistently excellent. It allies top notch fighting with a mass of content both online and offline. Superb netcode makes it easy to score some internet points, or just get some matches in with your pals and, if you’re lucky enough to have someone to sit on the couch next to you, expect there to be plenty of laughter and crowing while you battle for bragging rights.