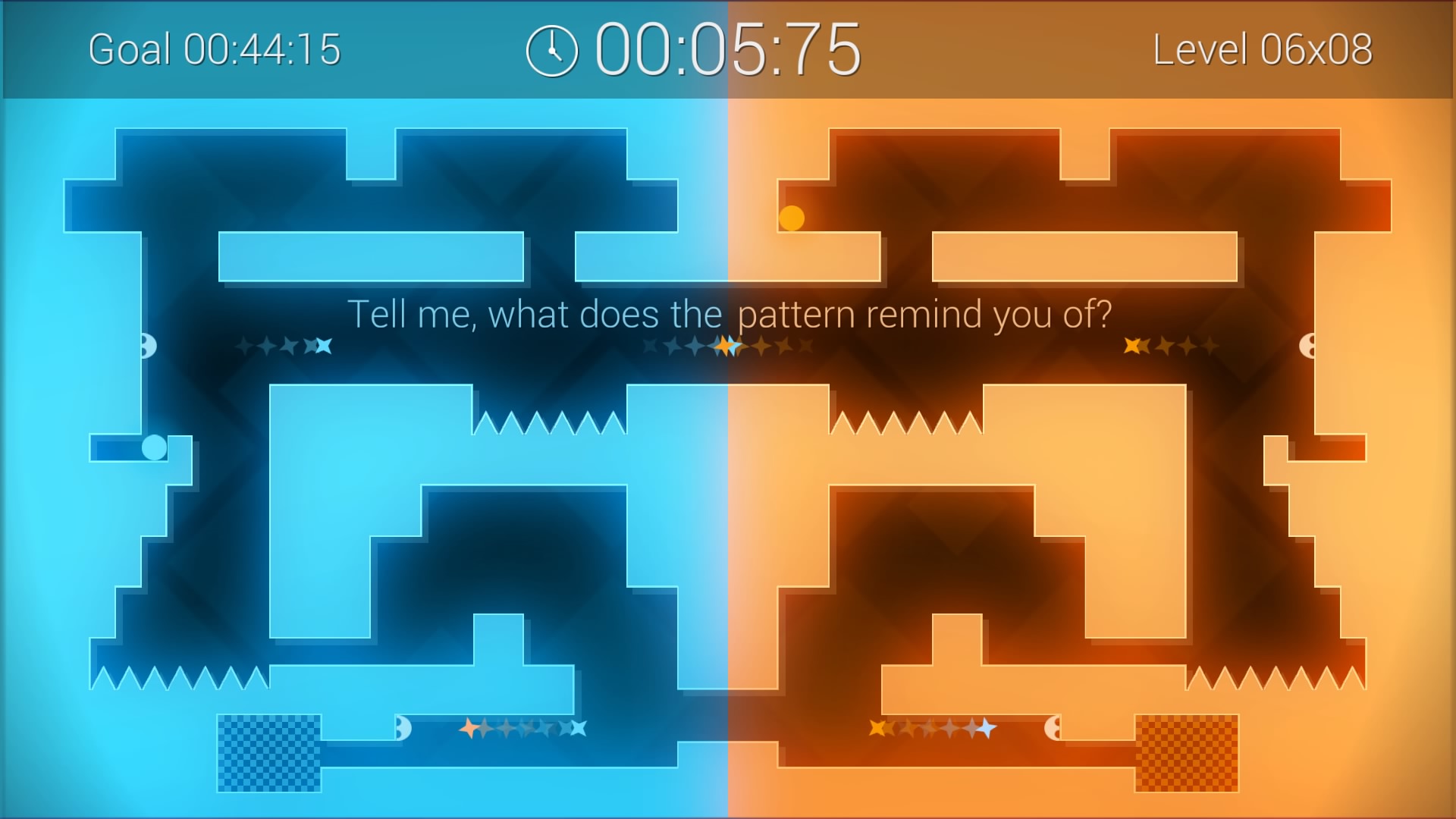 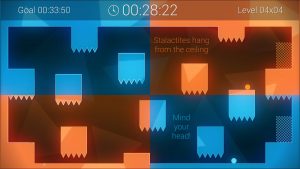 The ‘blurb’ on the Binaries website describes the two balls you simultaneously control throughout this pretty puzzle game as ‘loveable’. It also describes its puzzles as ‘controller-smashingly’ tough, so at least they were right about something; those little blue and orange arseholes are anything but loveable.

I’m getting ahead of myself though so, let’s roll back a minute and look at what we’ve got; a one-hundred level strong puzzle game for the PlayStation 4, Xbox One and PC, that sees the player try to control two balls to a chequered flag at the end of the level, at exactly the same time. Cue hilarity, hijinks and general tomfoolery! For the first hour or so at least, because after that, Binaries, is going to have its claws well into you and then it’s going to make a mockery of the casual friendship that has blossomed over that last hour. Binaries is going to get hard, you’re going to get angry and then Binaries is going to get really, really hard and then, if you’re me, you’re going to find out that your walls are made of concrete and your controller is not.

Controlling both of those innocent bastards at the same time starts slow but quickly gets you thinking about typical video game tropes such as spikes, turrets and teleporters, which is fine. Then you need to start moving one ball but not the other, which is no easy feat seeing as at any time, they’re both acting like two six-year old children on their fifth packet of Haribo. If there is space to move, they will both move, so you look at trying to trap one or block one off, which works  but only as long as you’re paying attention. Before you know it, the trapped ones wiggled free and is trying to hug the business end of a gun like some sort of lobotomised pacifist.

When you’ve mastered the art of trapping balls, you’ve got to start considering moving platforms, chequered areas (your target) that are at opposite ends of the room and finally, the fact that blue enemies can’t hurt orange balls and vice-versa. 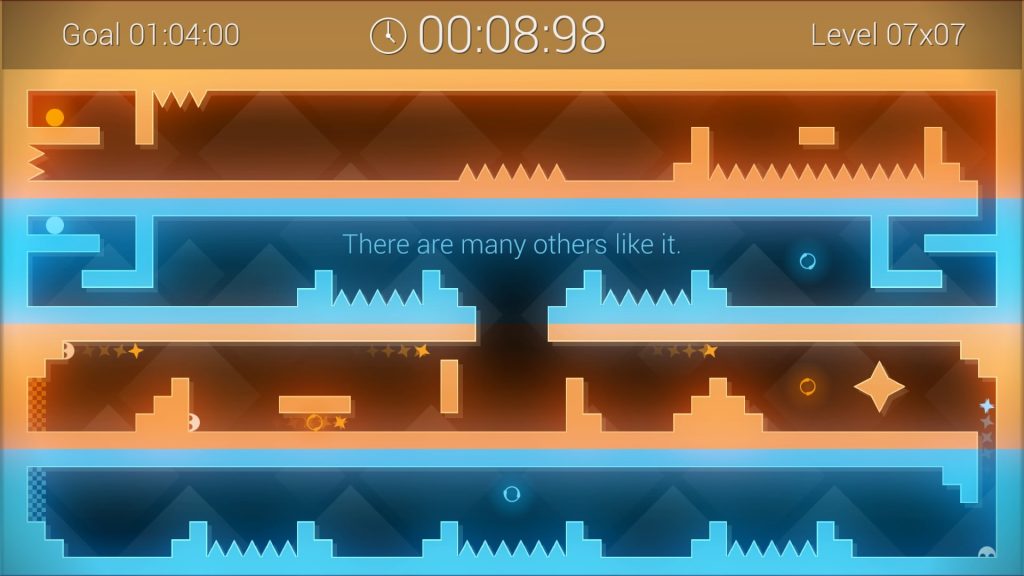 In a roundabout way, what I’m getting at, is that Binaries gameplay, is very very good. The premise is simple, the basics are nailed down inside thirty seconds and then you’ve got to master the art over one hundred levels. By level twenty, you’re going to be half-decent but the game is going to start to bite back, so the difficulty curve is present but welcome, because the worst puzzle games are ones that offer no challenge for long periods of time

Alongside all the ‘puzzling’ is some jokes and gaffs, written by the developer. Some of them provided the odd chuckle but generally speaking, you’re trying to focus on the keeping an eye on everything trying to kill you. They don’t take anything away from proceedings but occasionally add something.

Overall though, the game is littered with ‘ah-ha’ moments, because most of the puzzles aren’t solved quickly and require you to churn the grey matter. This is what puzzle games strive to achieve; getting you to work your brain but without being needlessly obtuse. Binaries achieves this early on thanks to its signature concept and doesn’t let up throughout the whole game. 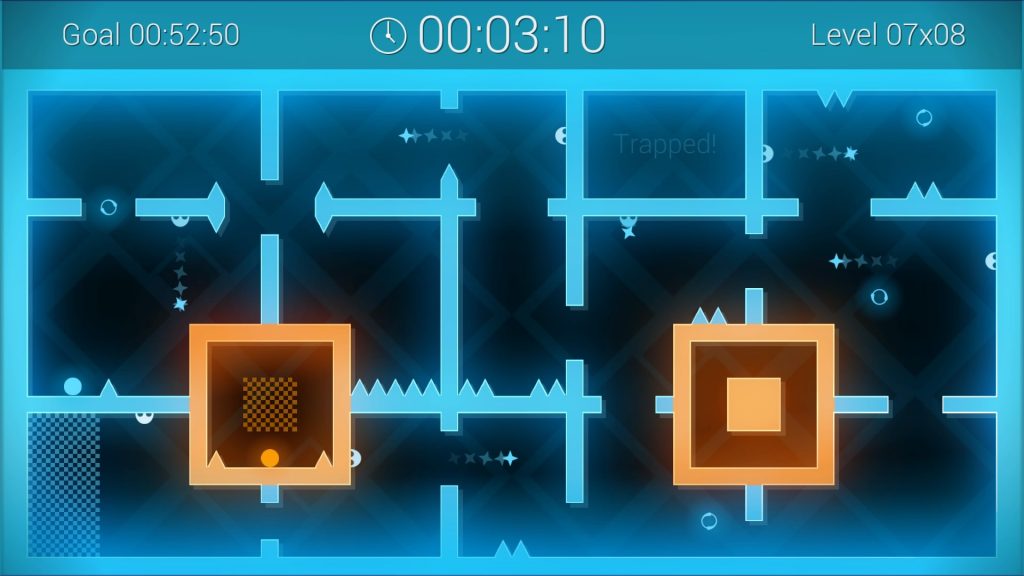 That being said, the concept is singular; you have two balls, they need to get to the exit. I’ve delved into a fair portion of the game and that core concept hasn’t changed. Sure, there are plenty of twists and turns but if you don’t enjoy the core mechanic, there isn’t anything after the first couple of hours that will change your mind.

Furthermore, my biggest issue is the occasional lag that occurs whilst in-game. These moments are rare but highly frustrating, given the intricate nature of the game. As they are rare, I’ve not let them effect my overall opinion of the game but I would recommend folk feedback to the developer so they work on appropriate patches.

On the presentation and audio front, Binaries continues to impress with sharp visuals, a slick UI and some catchy tunes. Puzzle games often suffer from lackluster audio but the music here doesn’t feel repetitive and is pretty catchy. The presentation is decent, along with the menus and maps; the developers do a hell of a lot with a relatively small palette of colours.

There is plenty to love about Binaries and it’s a solid game to add to your collection. If you’re a trophy hunter, it’s going to be a particular grind, because you’ll be chase ‘S ranks’ on every level and there are plenty of levels to get through. Regardless of trophies, there is plenty of content to keep you going and that’s not to be sniffed at. 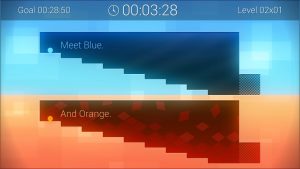 Binaries is a cheeky little title that will give you hours of fun and perhaps a few hours of frustrations. It is a clever game with a decent amount of depth and variety and is a great effort from the developer, Ant Workshop. If you’re looking for me to recommend you purchase Binaries, then I hope that what I have said does the job. If it doesn’t, though, there are two final points that make it an essential purchase. Firstly, it features the phrase “sun’s out, guns out” at one point, which is the quintessential phrase to describe any twat walking down an English high-street in June. Secondly, my fiancée, upon seeing me play the game actively asked to have a go at it. This, a woman who openly dislikes ninety-nine percent of video games except Donkey Kong and Frozen Free Fall, described it as ‘an alright wee game’ so ignore the score, this game performs miracles.

Binaries
8 Overall
Pros
+ A decent puzzle game + Nice visuals + Lots of varieties of puzzles
Cons
- Some of the jokes and writing can feel flat - Can be frustrating if you don’t get on with main concept
Summary
By asking both sides of your brain to Super Meat Boy at the same time, Binaries isn't for the faint-hearted but platforming veterans will have plenty of fun with the game's many well-designed levels. The one-player co-op style isn't for everyone though but despite this, some minimalist production values and some very minor technical issues, Binaries' clever puzzles help the game to really punch above its weight.