Not many indie games would open with a five minute cutscene. But then, not all indie games are from the fantastic Capy Games. Six years in the making, Below was a timed exclusive on Eggsbox and Win 10. It was with more than a little surprise that we noticed Below had finally made the leap to Sony’s own walled garden.

In essence, this is the same game as released in late 2018 with the post-release Explorer mode added on. This is a blessing for us as in default survival mode, Below is no picnic. It’s hard. We have to confess that we were more than a little bewildered when we first began to play. Things didn’t really improve by the time we impaled ourselves on some spikes for our first (of many) deaths. 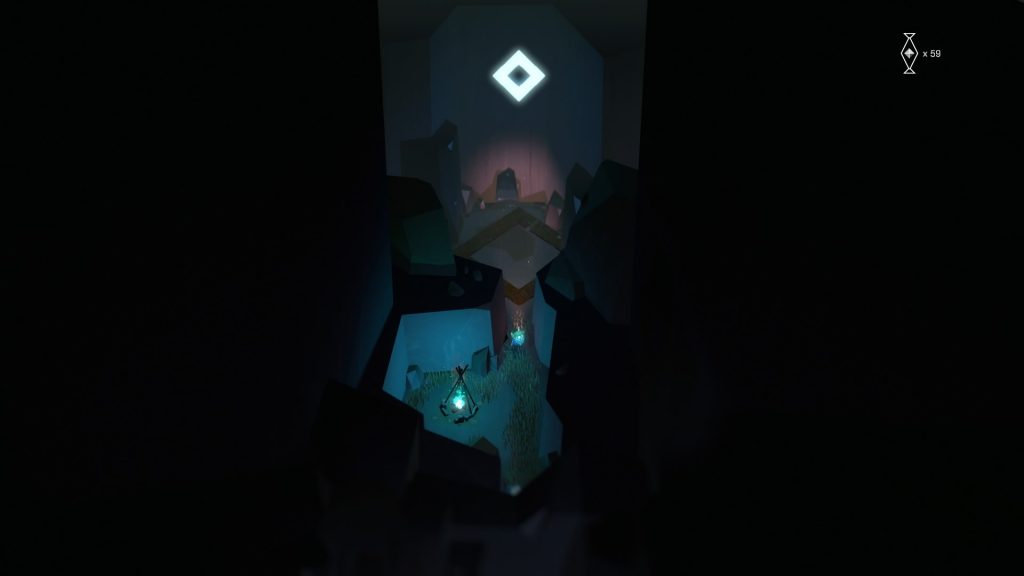 You see, there’s no handholding on offer. Those cosseted by modern tutorials will have a shock, even in Explorer mode. You’ll learn from your mistakes as well as experimentation. You’re just left to get on with it as Below doesn’t tell you a single thing. You’ll figure out fairly quickly that a little white glowing tooltip is something you can pick up. And that

is your inventory. There’s a rudimentary crafting system here too.

As the name might suggest, the bulk of your quest here is under the ground in the catacombs that criss-cross the bowels of a mysterious island. Below is very much a case of literally fumbling in the dark, especially if you’re low on energy shards or out of torches. 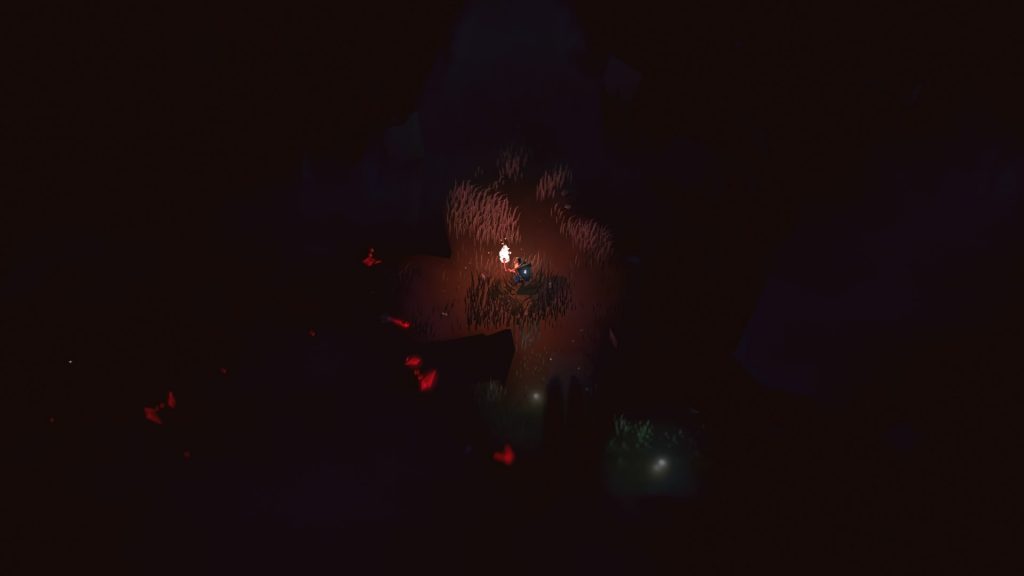 The labyrinth is inhabited by multiple denizens, the bulk of which are hostile. Red is danger in the natural world and so it follows here. You see a red light, it’s malevolent. The smaller fry will flee from a light source but they’ll be emboldened by a larger foe in their vicinity.  As you dispatch them, you’ll leave a glowing shard behind. You can collect these, but often they can be a handy waymarker in an otherwise pitch black cave. We found the best approach was to head back to the start of the chain, gathering them as we went so we could reach an exit to the next room.

In standard survival mode, you’ll have to battle not just enemies, but three distinct elements.  Thirst, cold and hunger.  These all have an effect  on your main health and it’s up to you to keep them in good shape. Easier said than done. Later enemies will inflict a bleed effect on you. You’ll need to have a crafted bandage to hand to stem this effect, otherwise you can find yourself at very low health very quickly.  Cold is the only factor you’ll need to worry about in Explorer mode, though you’ll still be subject to nasty bleed effects. 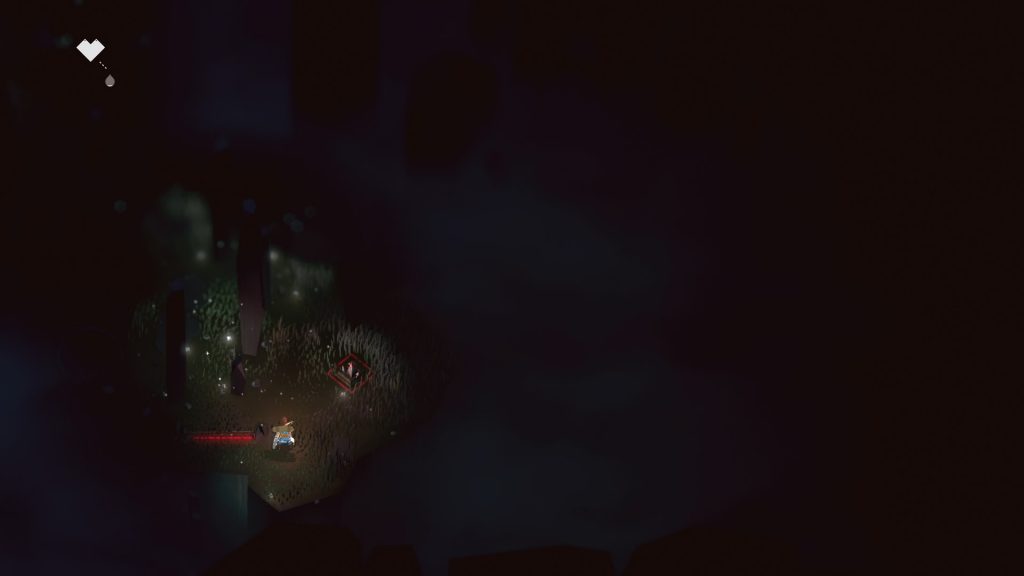 Even in Explorer mode you’ll likely reach a point where you’ll die repeatedly. We were reminded of a lengthy corpse run in Dark Souls only to succumb to the same enemy that did for our previous incarnation. Only in this case, each explorer is a new unknowing fool following where others have fallen. Handily there’s a fast travel mode you can use between campfires you’ve activated, our only gripe being that you’ll find yourselves with huge gaps between campfires and still finding yourself subjected to a lengthy odyssey to continue your quest.

All this is gently soundtracked by a lovely unintrusive soundtrack from Jim Guthrie. It swells gently as your next attempt begins and becomes more prominent at pivotal moments. It’s so lovely in fact, we would consider picking up a no doubt expensive copy of it on vinyl. 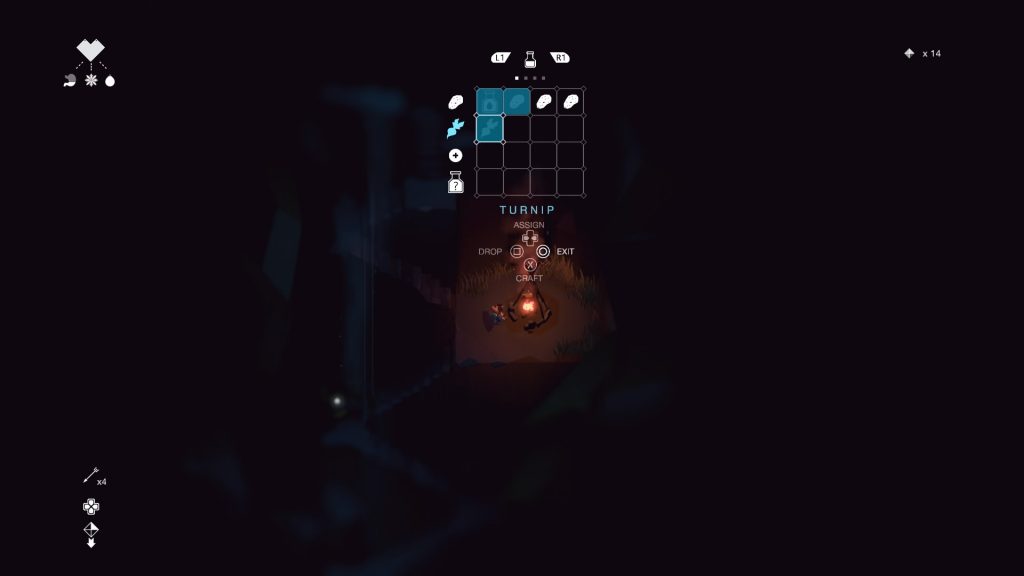 If we’ve any real gripes, the sheer obliqueness can be a bit much on occasion. We get it, but the absolute inscrutability is like trying to order food in a restaurant but they don’t have an English menu. Unlike that flawed analogy, you’re unlikely to get stewed fruitbat turn up on your table here. Though there are bats here, yup. There’s also fox-things. We can’t be 100% sure what they are as they are tiny, but we felt a pang of guilt killing one to get protein to cook. We wish there was the option to spark up a small fire to cook up broths and stews, as we found ourselves with all the ingredients to cook on more than one occasion, but no means to cook them.

If anything the labyrinth is a bit too dark and foreboding and meant we couldn’t play when our kid was up, lest it give them nightmares on top of the day-to-day virus anxieties…

In conclusion, Below is an addictive yet slightly frustrating dungeon crawler. Not one for shrinking violets, but very rewarding and intriguing the further you progress into the labyrinth. Those shielded tanks with the bleed effect can sod off though.

Cons
- Survival mode is massively harsh
- Doesn't tell you a damn thing at the outset
- Lengthy corpse runs aren't fun, especially when you succumb before reaching your corpse
- Gaps between campfires can be lengthy, would help if you could cook elsewhere
- The stuff of nightmares for those with young kids
Summary
Below is an accomplished dungeon crawler with the very welcome addition of explorer mode. By no means perfect, but wonderfully atmospheric with a lovely Jim Guthrie soundtrack.

One thought on “Below – PS4 Review”