From Polish dev Varsav Games comes Bee Simulator,  published by BigBen. However the title  is something of a misnomer. Sure, you go around collecting pollen and exploring a simulacrum of Central Park. But for most part Bee Simulator is broken down into a series of disparate minigames.

There’s a story mode of sorts which culminates in your finding a new hive for the bee colony. However this is fairly brief, broken down into eight distinct chapters. You start out hatching from a larval stage and are gently introduced to the  game mechanics as the newest member of the hive. You come up against various hazards, just as bees do in reality.  But the manner in which they’re dispatched is very much in thrall to videogames. As opposed to the reality of one sting and your arse being torn out as you fly off and die, you get to sting anything you like. This makes you more like those stingy wasp pricks but a necessary mechanic. 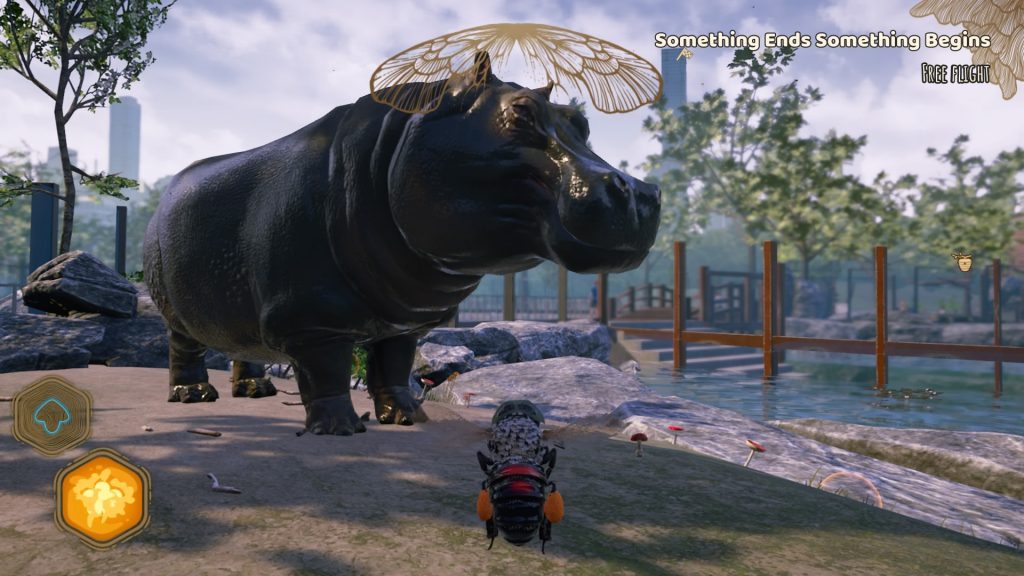 to descend. There’s not a massive amount of nuance in the flight model, but there doesn’t need to be. After all, you’re a bee not an AH64 Apache. Graphically Bee Simulator isn’t all that sophisticated, but the graphics do the job in the Unreal Engine implementation Varsav have used.

Wasps, hornets and their ilk are seen off with a Parappa-like rhythm action fight sequence, with

to attack. As you do so there’s a  power meter that fills up, eventually giving you the ability to unleash a powerful combo.There’s a bit more to these fights but the mechanic isn’t introduced in the best manner. In fact you can proceed without doing much more than tapping the buttons in sequence. Our only defeat came against a hornet as part of a story sequence, with no discernible penalty. Besides having to revisit the fight in question for a specific trophy anyway. Admittedly the easy difficulty level may have meant we were given a bit more leeway than if we played on a harder difficulty. 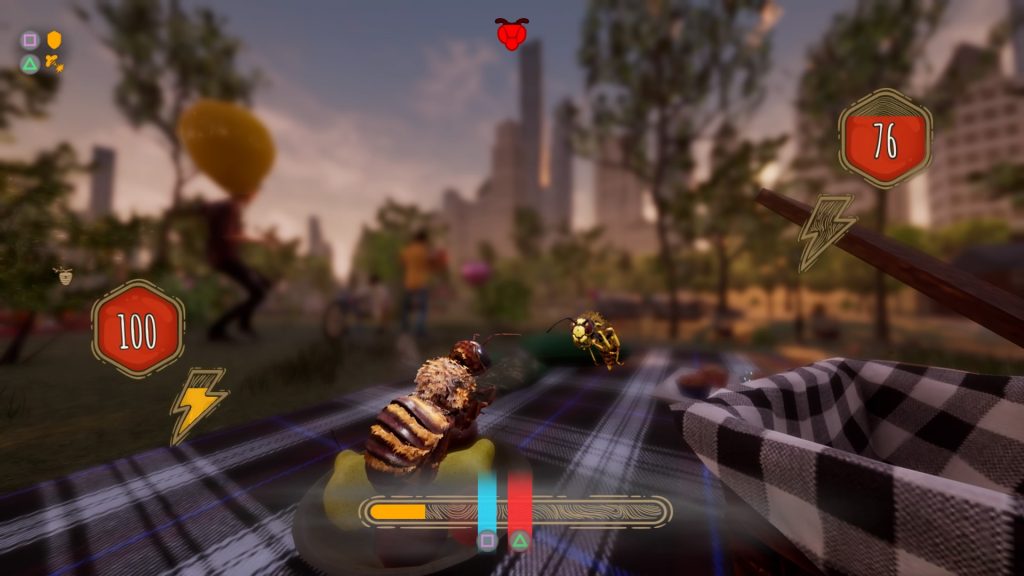 Once you’re done with the story, you can come and go as you please. In reality this means you can complete freeplay objectives. In addition to fight challenges you can complete chases, spider web escapes, bully and dance challenges. Chases are probably our least favourite mode, mainly due to the main quest being punctuated by two particularly annoying instances. You can be doing quite well on the face  of it, then suddenly your opponent speeds away and you have to retry. In the case of the story the sequence with the drone is an egregious example in terms of having a tiny margin of error before reaching a fail state. It is quite frankly, shit.

The first chase is almost as bad, but you have a little more leeway. Both instances led to us switching our PS4 off for the evening before having a go the following day. Arbitrary roadblocks to story progress in a game of this nature are categorically never a good thing. Outside of races you can fill your sprint aka Beetro mode (a play on nitro we guess) by landing on sweet foods like cupcakes or discarded banana skins. Annoyingly your beetro gauge isn’t retained in races which adds to the chore. 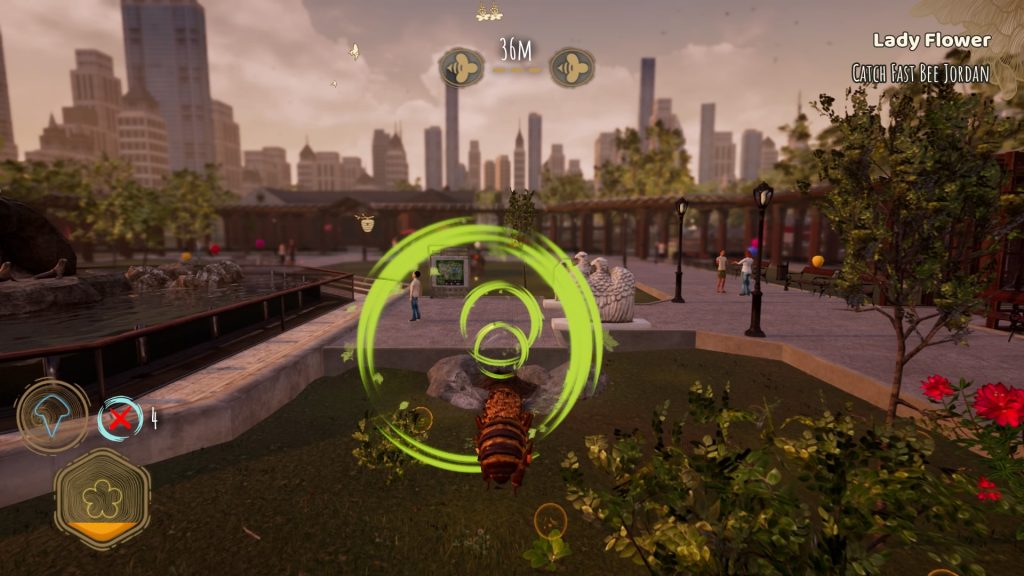 Collection challenges are just that,  find several of a predetermined pollen type, be it common,  uncommon, rare or EPIC!!! *Ahem* Either way, you can make the distinction between each pollen type by clicking the right thumbstick and entering an alternate view. Said view is nothing like Batman’s detective vision. Oh no. In this case we’ll give it a bit of slack as bees are much more likely to find flowers by scent alone. Accordingly, the colour coding in this scent view is probably more like what bees actually see.

Spider web traps are gently introduced while still in your original hive. They’re literally a case of triggering your escape as the moving meter goes past the green section. We’ve yet to get caught by a spider, we had to deliberately mess up  to confirm there’s no penalty as such besides having to try again. There’s a stupid kid who delights in destroying flowers. He’s the bully challenge to see off, this time by spotting him and stinging him to deter him. It’s daft but does the trick. 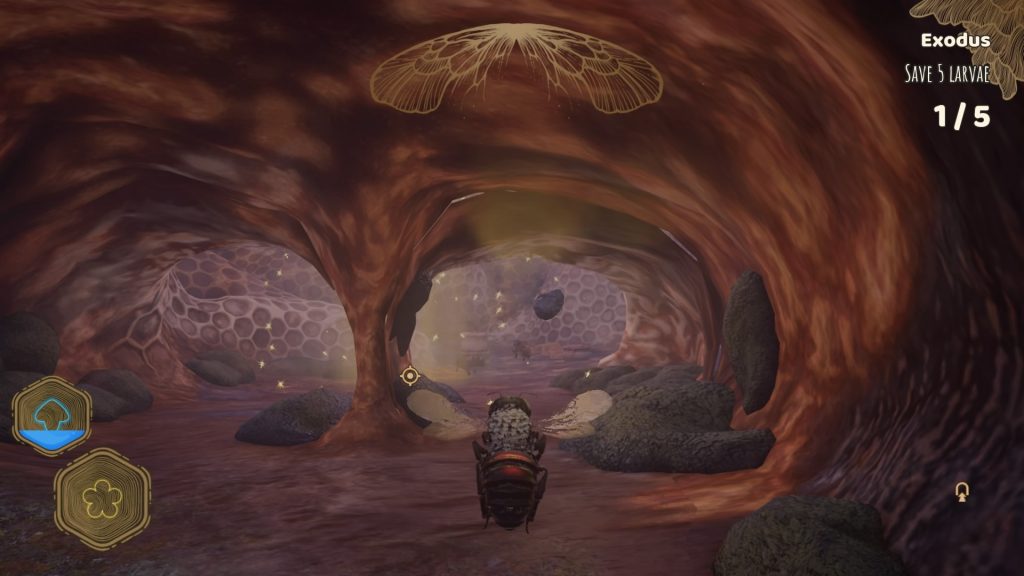 Finally dance-offs are a cute way to communicate how real-life bees tell their counterparts where good sources of pollen may lie. They’re a simple memory game where you have to match the movements of the bee you’re opposite. You have to copy the sequence of ups, downs, lefts or rights to progress.

In addition to the challenges there’s a wealth of side quests to fulfil including searching for lost little bees and seeing off the spider queen amongst others. There’s plenty to do after the main quest is done, put it that way. You could well feel a bit lost to start with due to there being no map function as such, but thankfully the devs have that in mind. If you’re in the immediate vicinity of any side items you’ll get a small indicator showing on your HUD. Admittedly, it’s only really any help if you’re in the general area but it helps a bit. In addition, any as yet uncompleted challenges are highlighted with a coloured marker. Red being a fight, green being collecting etc. 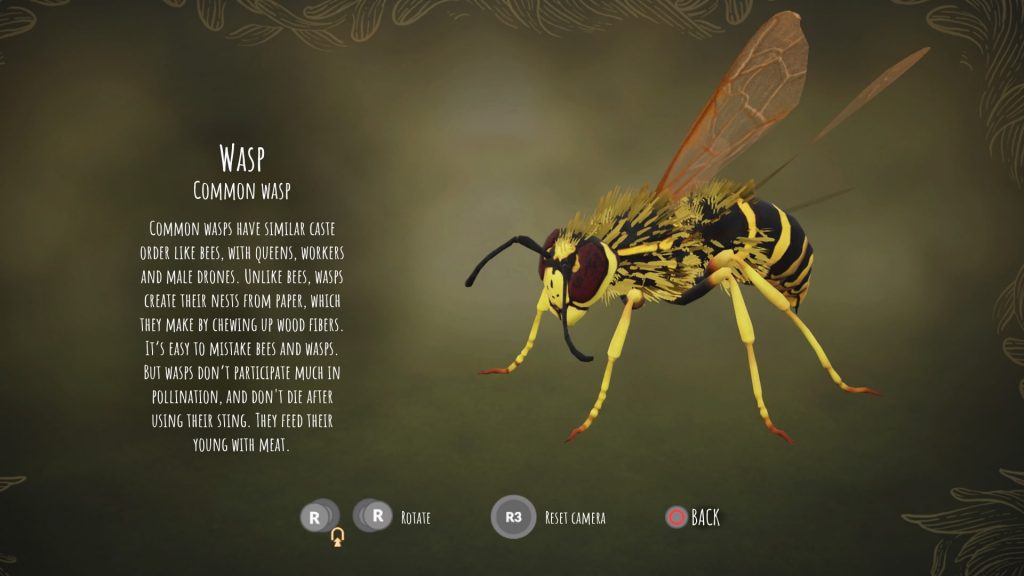 Most of the flora and fauna you encounter in Bee Simulator are automatically added to an in-game glossary when you fly near them. In the case of plants they are added once you’ve collected pollen from  them. In the case of anything bigger than an insect you’ll find the trigger point for adding to the glossary to be annoyingly inconsistent. When it came to the crocodile for example, sitting on their back wasn’t deemed close enough proximity to unlock their entry. Bafflingly the glossary updated on a patch of ground several yards away. Perhaps it was a delayed reaction, but either way it makes for a slightly odd interaction.

Selected creatures unlock three dimensional  renditions to view in the glossary. Additionally there’s daft cosmetic items and to unlock with knowledge points. They being the game’s de-facto currency gained by gathering pollen and completing challenges. You can also unlock flight trails and different bee species to play as. The wealth of animal facts and general bee knowledge give this a distinct educational slant. The frustrating chases and fights being tests of timing might prove too much of a barrier for younger players though. If you share a console with a child, bear that in mind as you may have to help them out periodically. A kid could do a lot worse than this game if they were given it by a well meaning relative this Christmas. As opposed to say a game based on a kid that streams on Youtube that we want no part of. 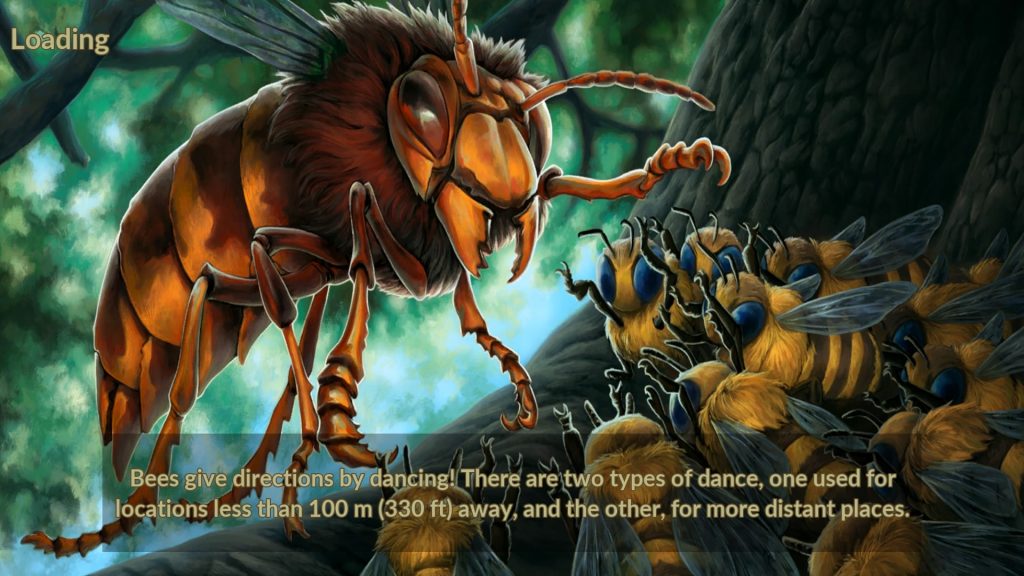 In conclusion, Bee Simulator isn’t much simulator but it is fun. The wealth of facts in the glossary and otherwise show that games with an educational slant can be well done. It’s not so much the bees knees as beeness as usual. We’re not even sorry for that.

Cons
- Perhaps a little light on the simulator part
- Main quest very short
- Races are a prick, especially when they hold up the storyline
- Not that graphically sophisticated
- Adding items to glossary annoying inconsistent
Summary
Bee Simulator is a fun game for kids and adults alike, not so much a simulator as a sandbox in Central Park with a variety of minigames. Yes, the main quest is too short and the races are probably the worst thing about the game but this is a solid effort due to the sheer scope of activities on offer.