Battle Chef Brigade landed on Switch and PC late last year and has now arrived on the PS4. If you imagine all those cooking shows where people cook under a time limit in order to impress judges then you’ll have a vague idea of the premise, but these chefs have to hunt their own ingredients.

You play as Mina who works at her parent’s restaurant in a small village. That’s not exciting enough for her however and her dream is to join the Battle Chef Brigade, so she sneaks away to sign up for the tournament and attempt to show off her culinary skills. This is only the backdrop to the story with another greater problem arising about half way through but Mina’s ultimate goal is what will drive you to the end of the game. 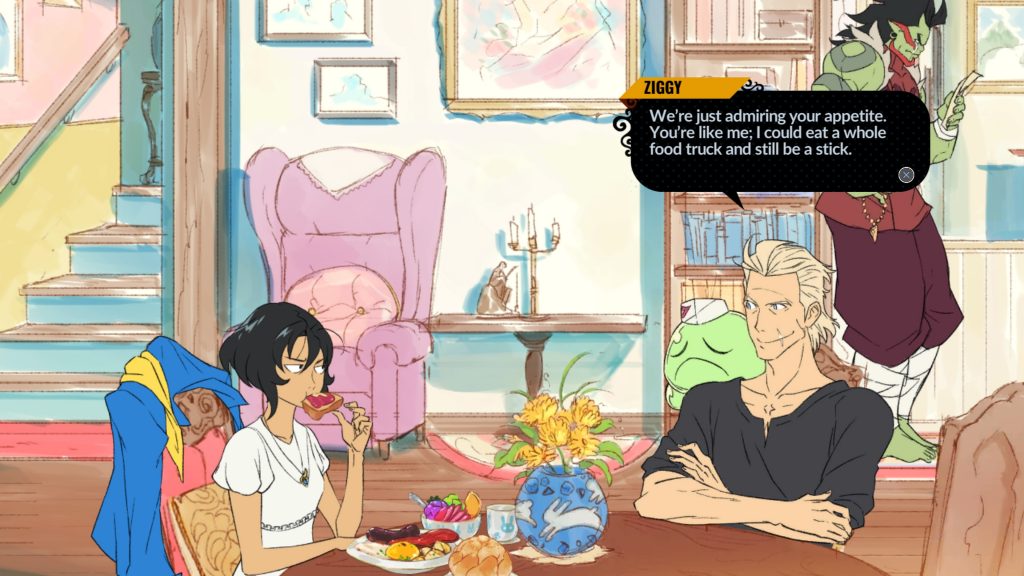 To join the Battle Chef Brigade Mina must defeat her fellow challengers to accumulate enough wins before taking on active members of the Brigade. By defeat I mean out cook them. A judge will state what their favourite element is (fire, water, earth or a mixture) and the announcer will state what the key ingredient will be which the dish must contain and then you’ll be given a time limit to procure the supplies and prepare them into a high scoring dish.

First you’ll have to run out into the environment and start killing monsters or collecting fruit from bushes. The controls here are surprisingly complex and versatile with combos, dashes, air combos and magic attacks making Mina quite the badass. Upon defeating a monster they’ll drop some random materials which you place in your limited satchel and then you return to the kitchen to utilise them. Each ingredient has a specific make up. Orbs of certain elements are grouped into at least two and a maximum of four in a square, you then put them into your pan along with other ingredients to combine them and make a better dish. 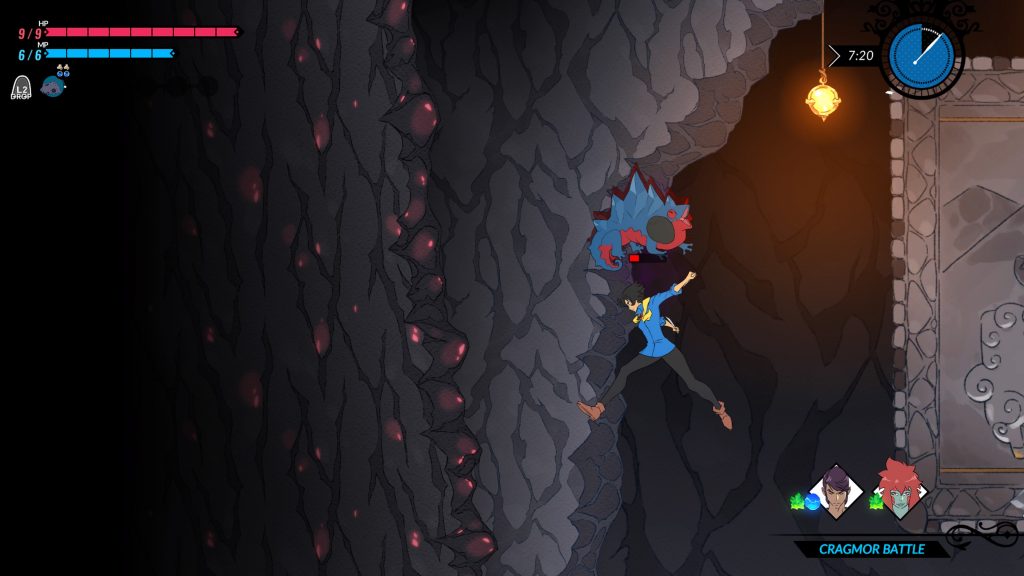 The default pan requires three orbs of the same level and element to be in a line at which point they’ll combine into one of the level higher, up to level 3. You do this by stirring (rotating) the ingredients in groups of four. The idea being to create as many level 3 orbs of the correct element to impress the judge as possible, the more you do the more points you get. You’ll get deducted points for being late, overusing the wrong element or failing to use the key ingredient so combining the collecting of ingredients and the cooking within the time limit is the key to defeating your opponent.

As you progress things get more complicated with you needing to produce separate dishes for multiple judges, having to deal with poison and elements that will break if you stir them too many times. Multitasking quickly becomes important. You can collect more specialist equipment to aid you for defeating people and buying them from the store, which will let you chop out unwanted elements, leave ingredients in a pot which will slowly upgrade the orbs or clone them or will cut down the amount of orbs needed to upgrade for a specific element. Quite a few are situational so knowing what you’re going to be tasked with is important but unfortunately the game doesn’t give you that information until your equipment is already locked in, sometimes scuppering you before you’ve even started but you can change your equipment on a retry. 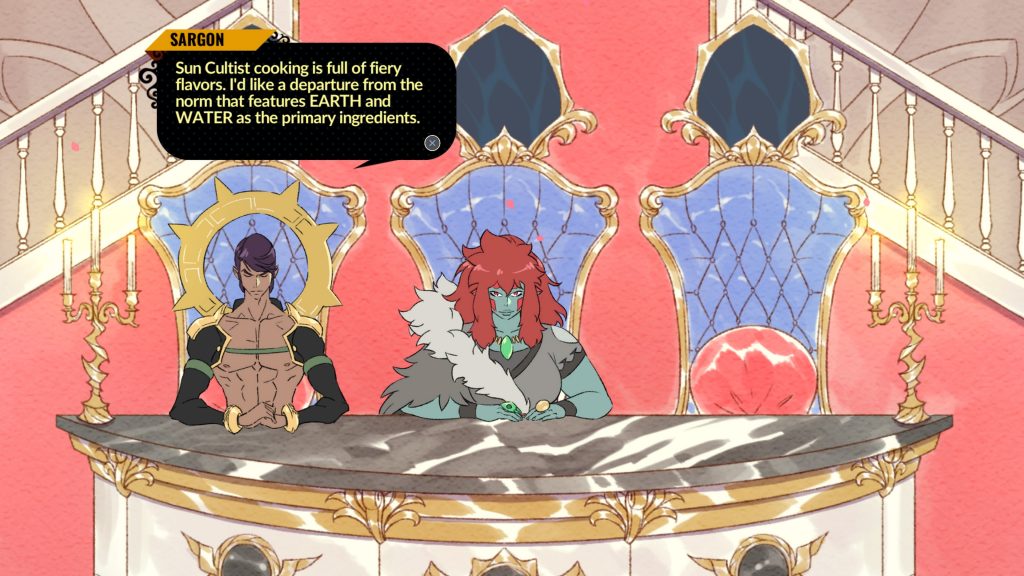 Outside of the battles you’ll get brief story sections, can talk to NPCs, be able to shop, but also test different parts of your cooking skills with jobs. These come in three varieties: hunting, puzzle and timed. The hunting ones teach you your move set and then simply become ‘kill x number of enemies’ and are the least interesting for it. The puzzles task you with mixing ingredients in order to reach a points total, sometimes requiring you to mix the ingredients in a very specific way which teaches you how to read the board and can be reset if you stir yourself into a corner. The timed ones have you cooking in a restaurant where you don’t need to combine the orbs, simply move the orbs into a set configuration for each customer. The quicker you are the more money you get so this obviously teaches you speed and accuracy. You can use the money you get from these jobs to buy the aforementioned upgrades.

Those are the only gameplay elements to Battle Chef Brigade but it’s wrapped up in a beautiful art style, with excellently designed and drawn characters. There are quite a few who show up through the story and each has character, from Mina to her opponents, from the judges to the announcer who has a different outfit at every round. Even the crowd at the cooking arena has original characters who you won’t see anywhere else. There aren’t a lot of frames of animation but that doesn’t mean it’s badly animated, it’s a design choice that fits with the art style. Everyone is voice acted well which gives the whole package a great presentation. 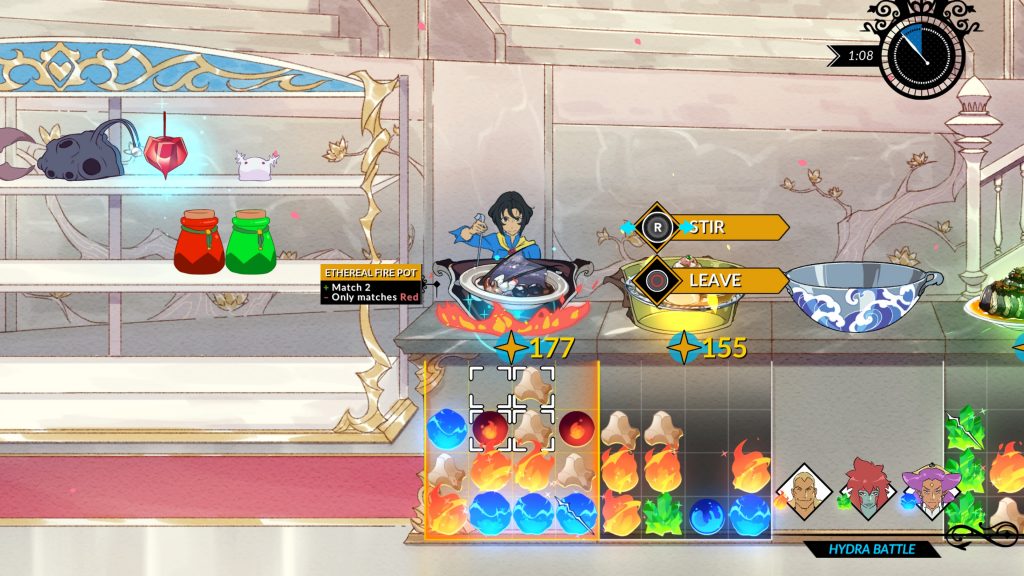 There are daily cook-offs and challenges to test each element of your gameplay and you can compete with a friend in local, split-screen multiplayer. If you dive deep into the cooking gameplay then there is plenty to sink your teeth into, including a hard mode for the story. I will say that I found the cooking competitions to get a little repetitive towards the end as although the ingredients and element requirement may be different you’re still running out, killing some enemies before returning and dropping those ingredients into a pan and mixing them together. That’s not to say that in the moment, with the time limit, that it can’t be intense with many dishes only just making in front of the judge in time having added a last minute ingredient but I struggled to take on too many challengers in a day due to it just feeling like doing the same thing.

It’s difficult to dislike Battle Chef Brigade however, as everything it does it does with a skill and expertise that can’t be faulted. The core game is enjoyable in short bursts but the variety wasn’t there for me to become truly obsessed, but the potential is there for the right player to really master the intricacies of cooking the perfect dish.

Battle Chef Brigade
7 Overall
Pros
+ Beautiful art style
+ Each gameplay section fits with the others
+ Great characters
Cons
- Cooking competitions can become repetitive
- Equipment is locked in before you know the stipulations
Summary
Battle Chef Brigade is a beautiful game with an interesting premise which requires skill, planning and time management to succeed. The cookery can get a little repetitive but there is plenty to get your teeth into.