Come and have a look behind the curtain. There are five writers on the PlayStation Country staff and we all have different tastes. What happens is that when review codes come in, we put them on a private forum that we use and people decide what they want to review. When a game like Aven Colony comes in, people don’t leap up asking to review it. Especially me. I like my gaming experiences short and to the point. A resource management city builder is far from what I’d choose to play, review code or not. But Aven Colony remained unclaimed and I stepped up to take one for the team with a slight feeling of dread. 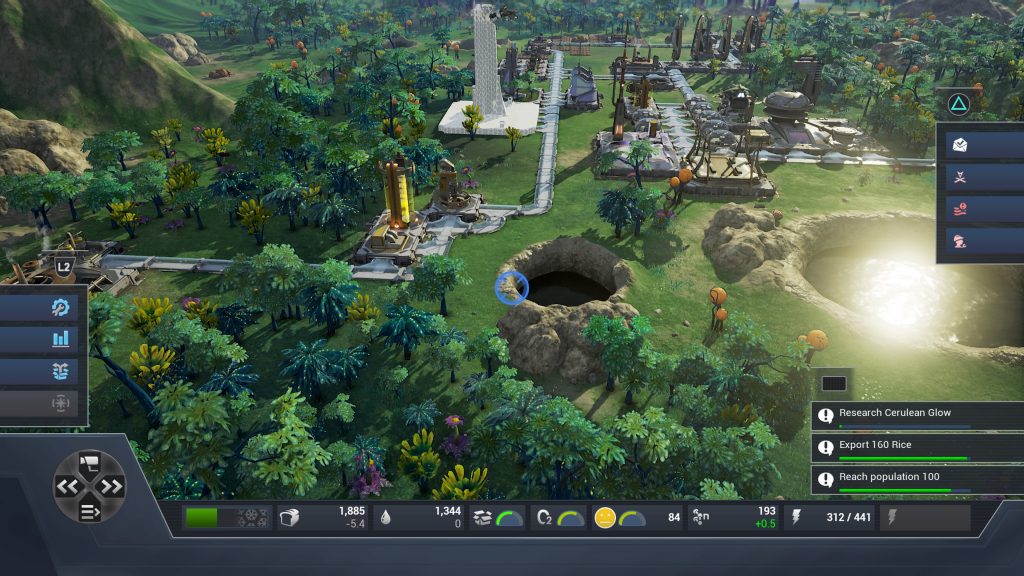 The game puts you in charge of a colony on an alien planet and leads you through each campaign mission with guided tasks. The game initially tells you to provide your fledgling colony with solar generators for power, farms for food, water pumps, housing and so on. Eventually you’ll move into buildings that protect the colony, research facilities, immigration centres and factories that produce the automated drones that construct buildings, keep plagues at bay and act as the police force.

There is a large selection of buildings on offer and when it comes to micro-management it never really gets too rough aside from making you consider the staffing. If you’ve got 100 colonists and a heap of facilities to run, your buildings won’t be efficient but you need all of them because life is hard like that. In the last mission I played I found myself loading up on construction staff and slacking off on the farming because I realised I needed more buildings and less quinoa in my life. 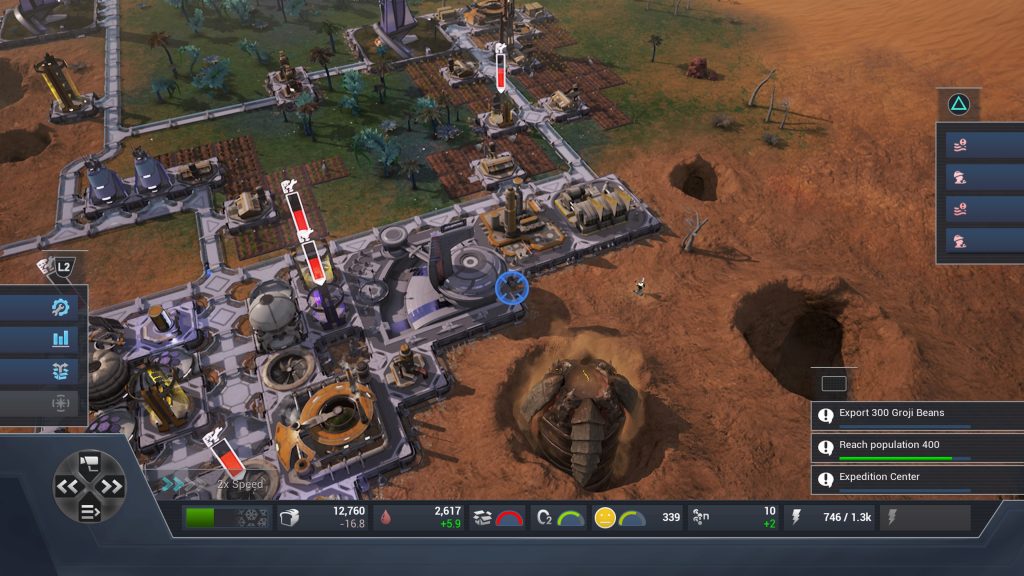 The game doesn’t get too much more complicated than that but definitely requires some attention. The level of depth is just right for someone like me (I liked Civilization 1 but never fancied the sequels, if you know what I mean) and thankfully the control system suits the game well. Your sticks let you float around above the colony while R2 brings up the radial construction menu and L2 brings up a set of handy menus that let you manage life on the colony, implement visual overlays to let you identify issues and so on. It’s not effortless, it never could be with a game like this, but it works much like a decent console-based football management game for example.

Visually the game is pretty and detailed but figuring out which building is which can be difficult. To remedy that, I found myself grouping buildings together logically. Food over there, power over there, research over there on the left. You get the idea.  Efficiency becomes important so that you don’t become lost because your colonies can get pretty large after a while.

When it comes to an actual challenge, the game is a bit odd. For the most part it tells you what you need to do next and as long as you are relatively disciplined about it, you’ll be fine. However, eventually the game starts to throw some serious curve balls at you. A rogue storm or a crazy zombie virus can seriously affect your productivity and while it’s fine trying to turn your colony into an efficient production line, if you forget to look after your citizens, they’ll soon be too pissed off to work.  But that said, your hand is held for the most part. 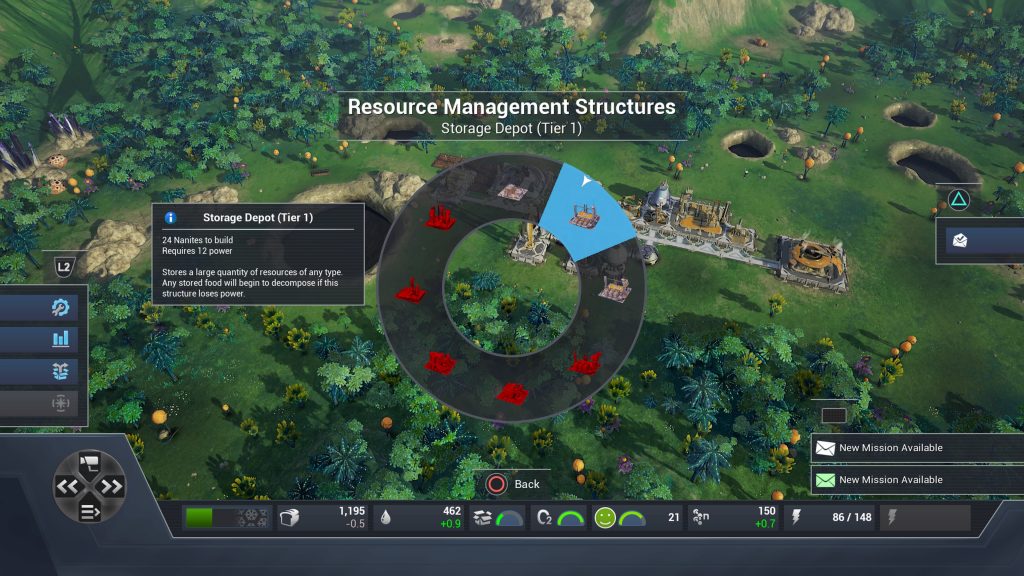 You can control the speed of the game, accelerating it to 8x speed which minimises those construction times but can make it hard to keep up with your notifications. You don’t want your main power generator failing because you couldn’t be bothered waiting around for a farm to get built but the choice is yours. Ultimately, this game is best played in a relaxed way. When you consider your layout and really monitor the threats to your colony, the game ends up making sense.

The game offers quite a few story missions to get through and these last longer than you think in that you can fire one up, get through it and suddenly you’ve lost an hour or two in the blink of an eye. But they aren’t overly long either which is good because you ideally want to do a mission in one sitting. You don’t have to but trying to figure out where your research centre is after you’ve slept will definitely be a little challenging.

Each mission gives you a different environment. Some worlds have ample resources and fertile lands while others are barren and full of dangers. The game plays on these variations well, molding the story around the challenges you face. A sandbox mode is also available if you just want to build your own little LV-426. The missions do introduce additional units in a way that feels natural without feeling like an extended tutorial. 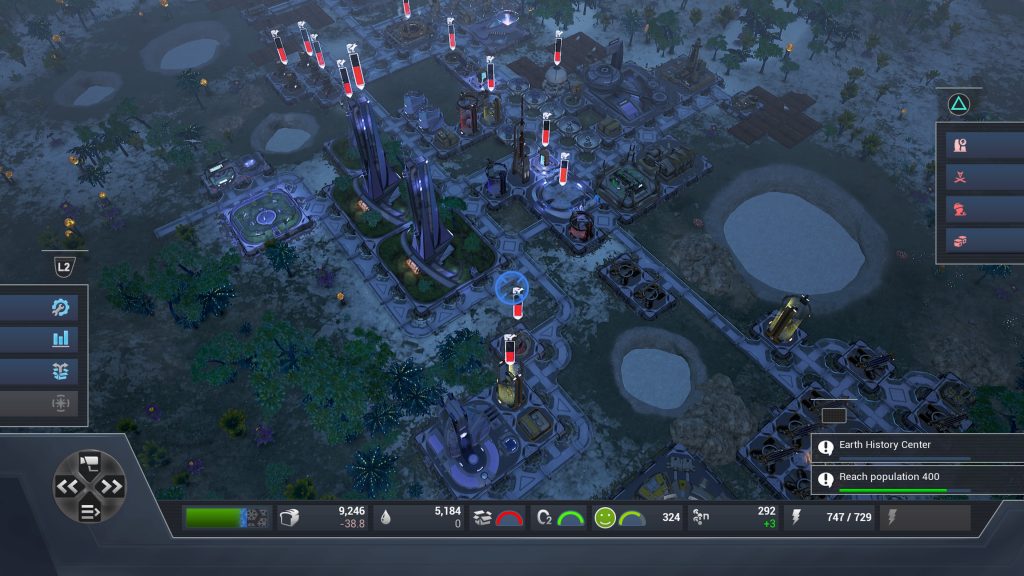 Technically the game holds up well. I’ve had no issues at all beyond a little bit of a performance stutter when the screen gets crammed full of buildings and I’ve jumping in and out of menus but it’s never anything game ruining. The audio is good with some reasonable voice acting from your advisor and colonists while music and sound effects convey a decent enough atmosphere while the aforementioned visuals do a good job of giving you a lot of information without drowning you in it.

I’m a fan of Aven Colony. I didn’t think I’d be but I’m kind of addicted to it and it’s probably the first base building game I’ve enjoyed on a console. They’ve done a great job of getting what is essentially a PC game to sit comfortably on a PS4 and if you fancy something a little different, Aven Colony will give it to you.

Aven Colony
8 Overall
Pros
+ Well designed controls
+ High quality visuals
+ Addictive gameplay
Cons
- Can hold your hand a bit too much
- Not one for fans of action
- This game eats time
Summary
City building games don't usually find their way onto consoles and rarely are they as well-executed as Aven Colony.