Having recently reviewed the remaster containing the original three Spyro games when another remaster of a platformer arrived in the PlayStation Country mailbox I volunteered my services. Asterix & Obelix XXL 2: Misson: Las Vegum was released on the PS2 back in 2006, the Xbox 360 was already in people’s homes, and it was only released in Europe so it would be no surprise if you’d never heard of it before. A third game is in development so to drum up some interest this remaster of the second title has been released on PS4. 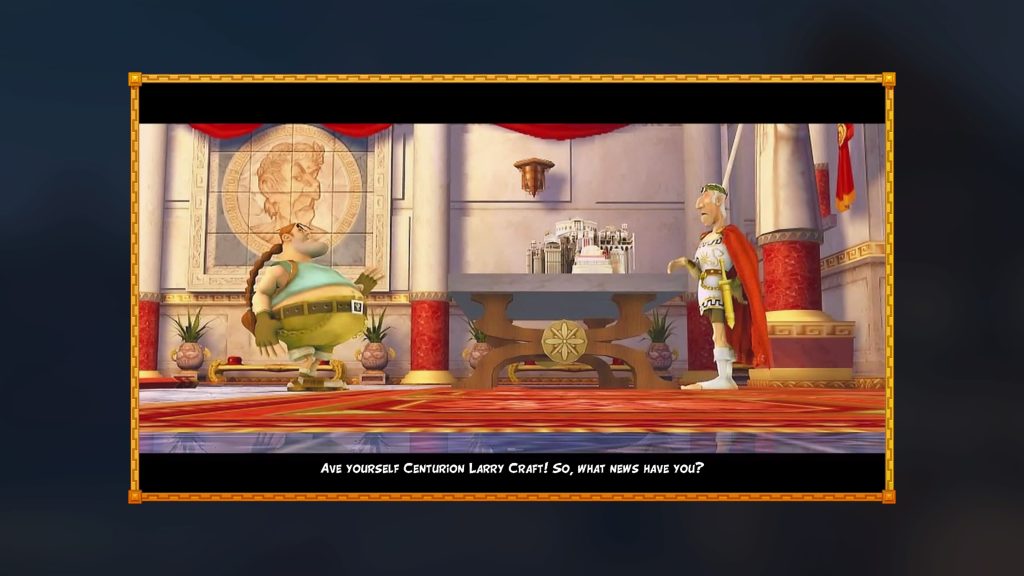 You play as Asterix and Obelix, the two Gauls from the comics/animated films, as they visit the Roman theme park Las Vegum to find Getafix the druid who seems to joined the Romans. Las Vegum is split into six areas, each ending with a boss fight and taking Asterix and Obelix to varied locations, from beaches to coliseums.

Although I described it as a platformer earlier, and there is a certain amount of jumping if nothing too taxing, as is fitting with the source material Asterix and Obelix’s main interaction with the world is to fight Romans. Similar to a Devil May Cry, there are times when you’ll enter an area and you’ll have to defeat a certain amount of enemies before you can progress. Combat has quite a few different moves whilst also being quite simple. You can mash on

for your basic combo, press

to kick and stun the opponent,

will grab a stunned opponent which can then be used as a whip, thrown or slammed into the ground.

You can switch between Asterix and Obelix at any time and are encouraged to do so by character specific suggestions of moves to do to boost your combo meter. These are also pretty good for teaching you moves, like the ability to throw a stunned Roman to your partner to slam into the ground, creating a shock wave. There are lots of enemies on screen during battles and you quickly come to rely on the same moves for crowd control, only changing tactics when an enemy has the ability to block making timing your attacks important. 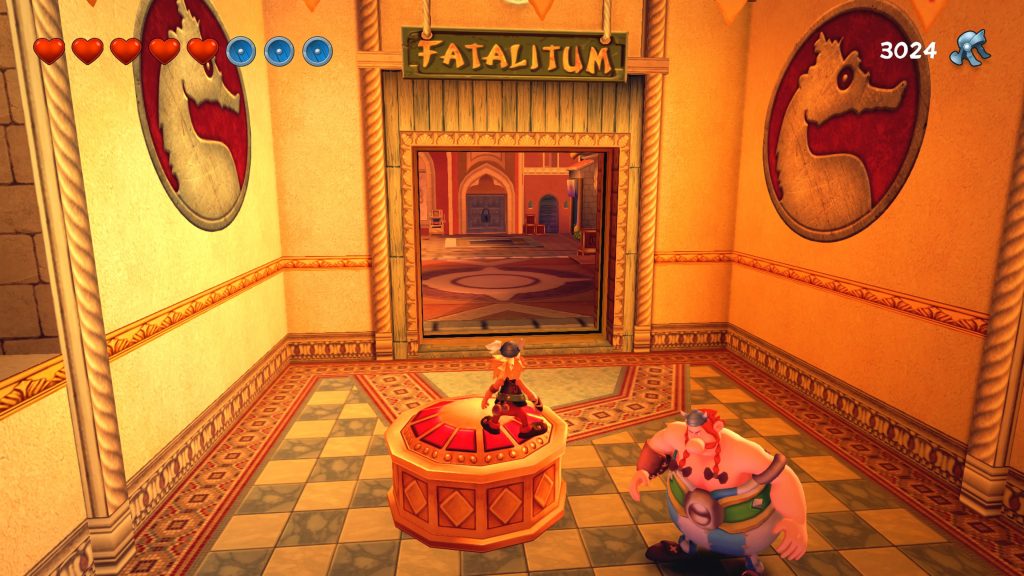 When you’re not battling Romans there are blocks to push onto switches, bombs to move to breakable walls and boxes to smash to collect the Roman helmets (currency) contained inside. You also get the odd turret section and what equates to a mine cart section, riding on rails whilst collecting helmets and dodging obstacles. This was a PS2 game after all.

Unfortunately, unlike the remaster of the PS1 Spyro titles, Asterix & Obelix XXL2 feels like a PS2 game. The camera is horrible and it constantly gets stuck on the environment, the graphics have been upgraded slightly but it still looks like the mid-range PS2 game it was and suffers from slowdown often, the video cutscenes don’t fill the screen and still look blurry and the voice acting is terrible. Obviously the gags are aimed at kids but it’s really not funny and contains so many references as to dilute the impact of all of them. You’ll fight Romans that look like Mario, Sonic, Pac-Man and Rayman. Environments are adorned with imagery similar to (by which I mean pretty much exactly like) Mortal Kombat, Tekken, Quake, Unreal Tournament, Soul Reaver, The Sims and more. I probably didn’t even notice them all. And of course there’s a Matrix reference. 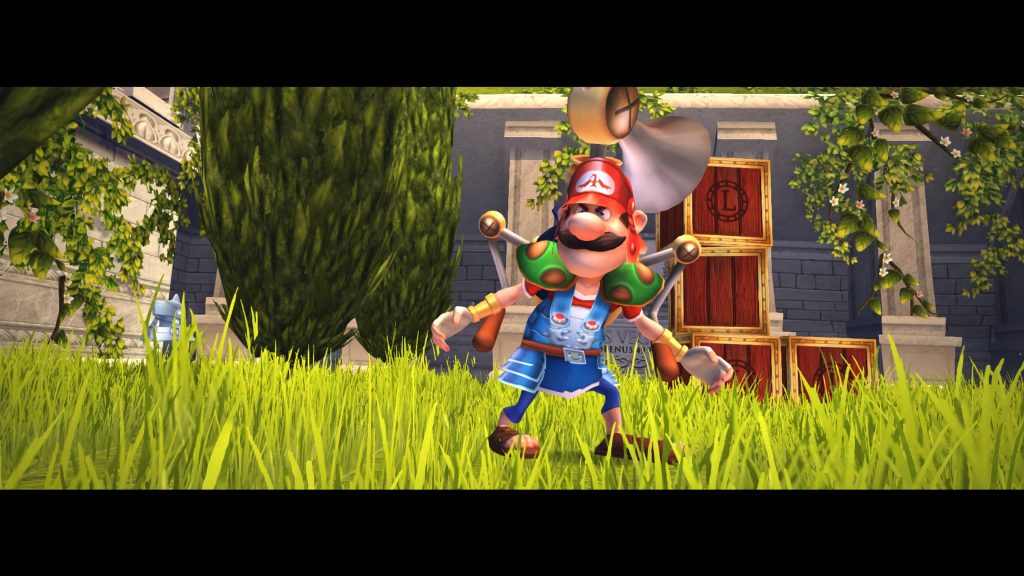 I wouldn’t mind if the gameplay was worthwhile but I’m not sure I’d have appreciated it twelve years ago, so now it’s quite repetitive. When you’re locked in a room and have to defeat a number of enemies the numbers start quite high and by the end of the game you have to defeat hundreds to progress. It’s not difficult (there are three difficulties to choose from) but it is tedious.

To alleviate some of that the remaster has actually added some gameplay mechanics. Collectibles have been littered throughout the levels to encourage exploration, there are more upgrades to buy in the in game store, fast travel makes it easier to return to previous levels and challenges, which just involve more fighting but task you with defeating as many enemies as you can within a time limit. Having not played the original release I can’t make a direct comparison but they certainly seem like additions that stop the game feeling too straight forward.

But that doesn’t justify the price they’re asking for. I don’t mean to constantly bring up Spyro but when that contains three games (albeit remastered PS1 titles) and costs £10 less then it’s very hard to recommend splashing the money on this. At a lower price I could have said fans of the franchise and the PS2 release could get something out of it and people looking for an okay 3D combat platformer from yesteryear might want to give it a go, but for that much money you could pretty much buy a brand new title. 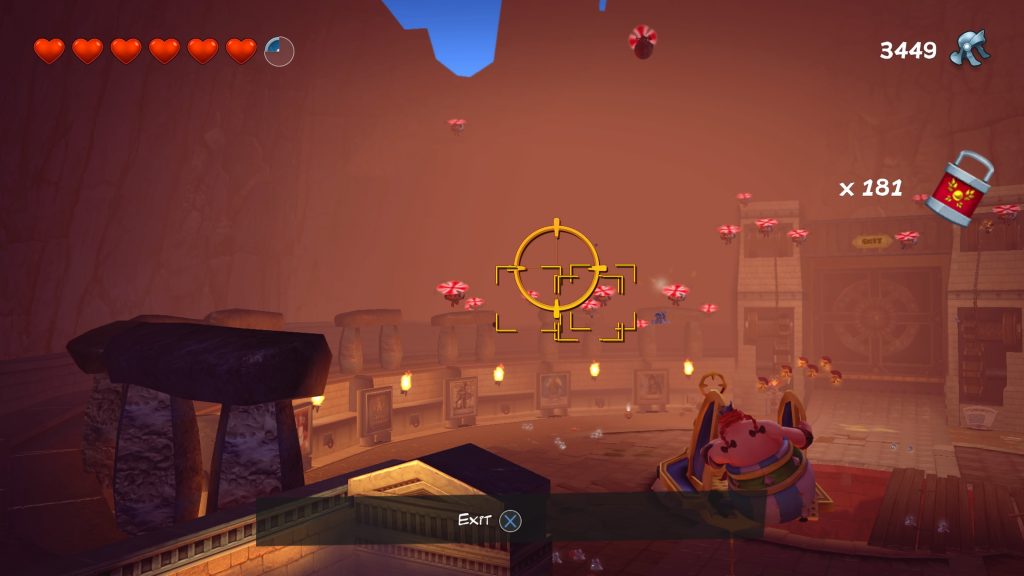 Asterix & Obelix XXL2 does a decent job of bringing a PS2 game to the PS4. Whether it deserves your time in 2018 is another matter and the price is just silly, but adding features to the game shows a desire from the developers to attract a modern audience. Hopefully the new game will have an extra twelve years worth of experience making it a truly modern take on the 3D platformer/brawler. If it’s too similar to this then history may repeat itself, releasing at the end of a console generation and being remastered in a decade for an audience who’ve never heard of it before.

Asterix & Obelix XXL2
5 Overall
Pros
+ Additional features from the original release
+ Surprising depth to the combat
+ Have to respect how blatant all the references are
Cons
- Very much feels like an average PS2 game
- Repetitious gameplay
- Bad camera, poor voice acting and unsteady frame rate
Summary
Asterix & Obelix XXL2 has been enhanced since its PS2 days but it still feels like an average PS2 game. The additions are welcome but the old school camera, voice acting, and repetitive gameplay make this a tough game to recommend, especially at such a high price.