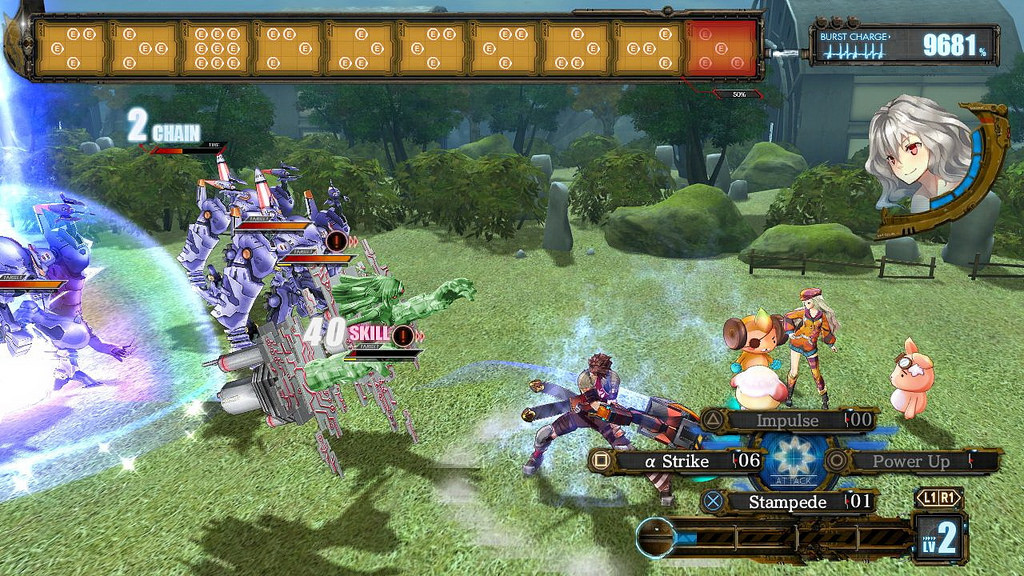 Ar nosurge: Ode to an Unborn Star is a JRPG title created by Gust and is a prequel to the Ar tonelico series of games. This is actually a sequel to the only released in Japan PSVita title Ciel nosurge, but does that have any bearing on whether you’ll enjoy this game?

You initially take control of Delta and Casty. Delta has lost his memory (probably so other characters can explain the story of the last game to him) and Casty is part of a special forces group called PLASMA who Delta got sacked from. Casty is called into action for a rescue mission and she works best with Delta so he is hired as a mercenary by PLASMA. 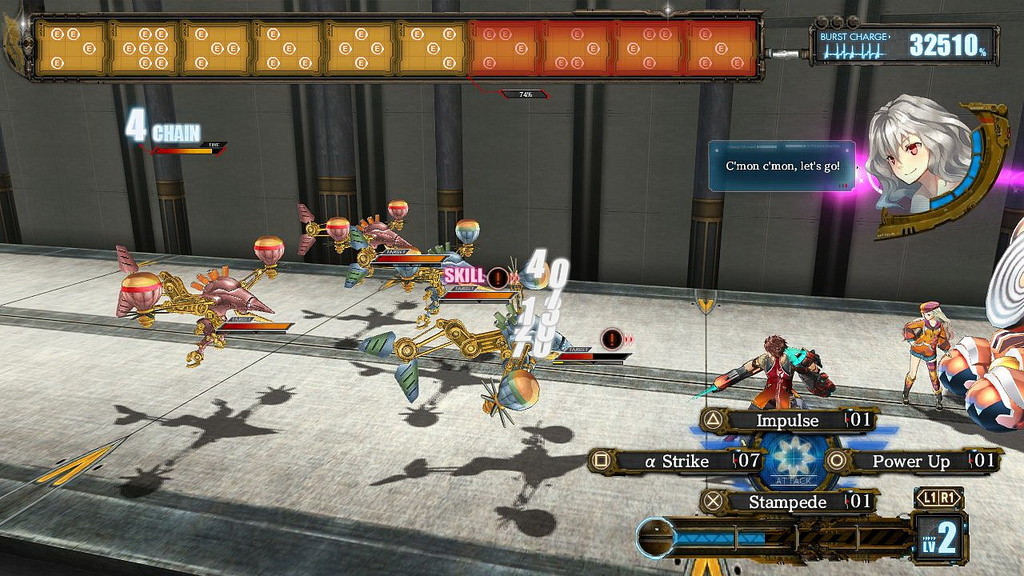 You never control more than two characters at a time as the combat system revolves around this two person mechanic. The female (Casty for example) can use Song Magic but this takes time to charge up, so the male (Delta) stands in front of them, attacking enemies and defending. Waves of enemies come at you and as you dispatch them the Song Magic charges up, once you’ve got enough charge you can unleash the song, which will either kill some enemies and end the fight or, if you’ve charged it enough, kill all the enemies in the area. Do that and you can wander around without the worry of random battles until you reach the next location.

As you fight you want to try and ‘break’ enemies which stops them from attacking. This is a turn based game so you can see which enemies will attack next and if they are going to use a ‘skill’ and if you concentrate your attack on these enemies and use your abilities (which are limited use) effectively then you can break them and they’ll lose their turn, which means you get all your attacks back and start attacking afresh. This is certainly the most interesting part of the battle system as unleashing the song magic to kill all the remaining enemies feels a little anti-climactic. Sure you get a special animation but everything just dies with no input from you and I guess you’re supposed to earn it but the difficulty is so low on the default setting (which you can change at any time from the options) that the combat encounters just fly by.

Which is unfortunate, as apart from a bit of running around and picking up glowing objects off the floor the most dominant part of the gameplay is cutscenes and conversations. Overwhelmingly so. I don’t mind a little bit of character development or even throw away cutscenes and conversations, I wouldn’t have gotten far with most JRPGs otherwise but Ar nosurge takes it to a whole new level. It doesn’t help that the translation isn’t great and so certain bits of dialogue take a little extra translating with help from the context to make sense and don’t bother talking to random characters in town, they simply talk gobbledegook where one sentence has no relation to another. There are also plenty of spelling mistakes. 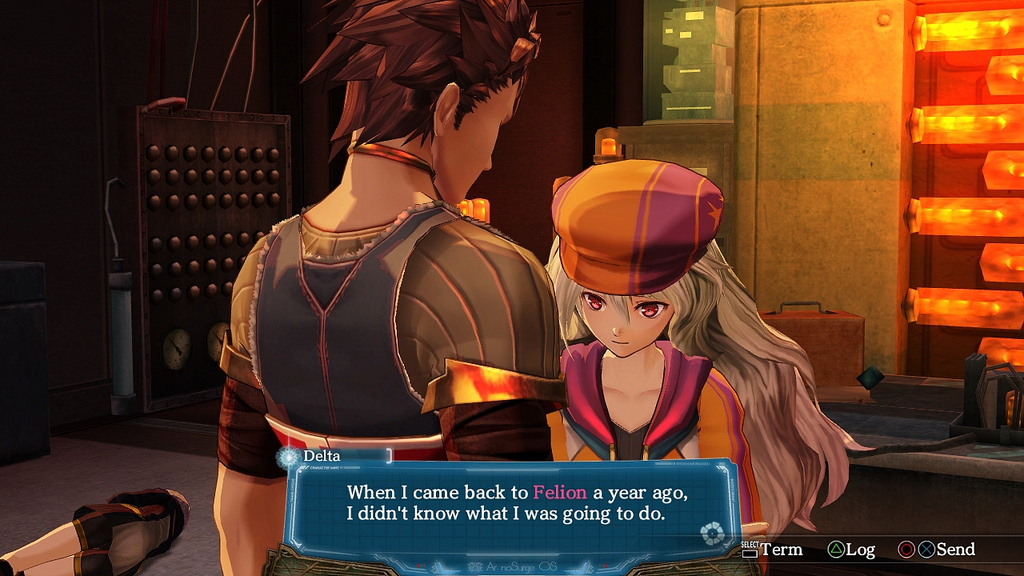 No matter what you do chances are a conversation will break out, not a short one either. There is a crafting mechanic in place but if you want to craft something you better want to talk about it afterwards. There is a mechanic where you can deepen your friendship and thus learn more abilities by, you guessed it, talking, whilst sat in a pool in your swimming costume (you probably didn’t guess that bit). There is even a mechanic where you can ‘dive’ into people’s subconscious in order to get them to open up more and learn new song magic which sounds quite interesting as their mind can make up all sort of random scenarios, but all it is in reality is reams and reams of dialogue, with the odd choice for you to make (get it wrong and you get kicked out and have to start over again).

There is a second group of characters you control shortly into the game and you can ‘zap’ between the two couples from any save point to progress their story. At certain points you won’t be able to progress with one couple before moving forward with the other but it is an interesting concept where you’re seeing the story from two sides. They don’t share experience so you have to be careful not to leave one lagging behind strength-wise but they do share items.

Presentation-wise the game is adequate. The menus wouldn’t have looked out of place on the PS2 and the graphics look nice in stills but don’t have much variety in the way of animations. The music on the other hand is generally very good, with some nice battle tunes and suitably epic themes. Not every line of dialogue is voice acted but what is there is fine, though they’re hampered by the translation. 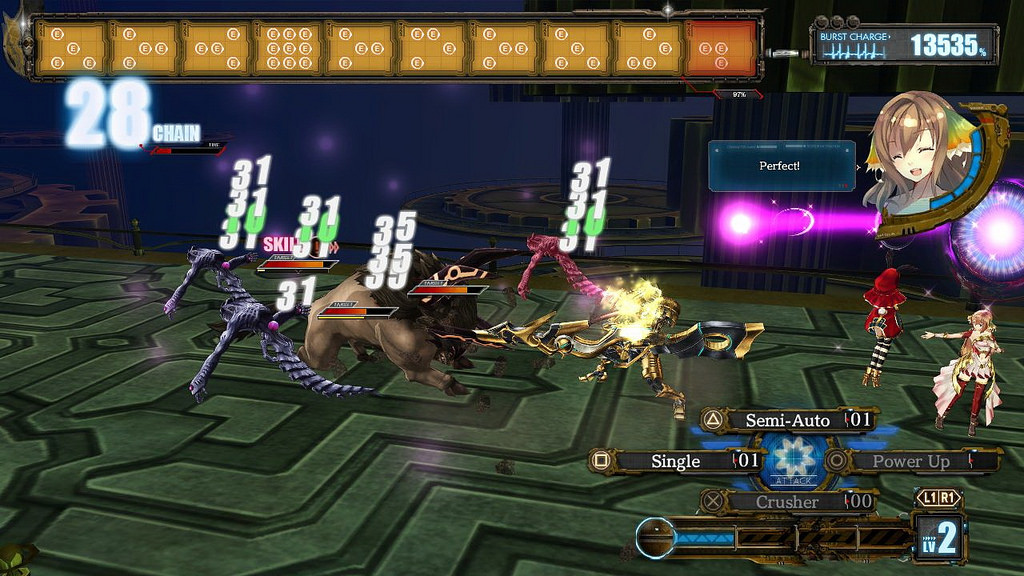 Despite how it might sound I have enjoyed my time with Ar nosurge: Ode to an Unborn Star. Yes the constant chatting slows the game to a crawl sometimes but when you are exploring and taking part in fights it can be fun. If you think you’d enjoy all the chatter or are willing to skip through it then you could get a decent amount of enjoyment out of this game. You might struggle to follow the overarching plot but if you just take it one plot point at a time it pretty much makes sense.

Ar nosurge: Ode to an Unborn Star
6 Overall
Pros
+ Battle system is fast paced
+ Great music
+ Lots of different mechanics to sink your teeth into
Cons
- Way too much talking slows the game down
- Poor translation
- Sequel to a game you've probably not played
- Just SHUT UP, please
Summary
The constant chatting slows the game to a crawl sometimes but when you are exploring and taking part in fights it can be fun. If you think you'd enjoy all the chatter or are willing to skip through it then you could get a decent amount of enjoyment out of Ar nosurge: Ode to an Unborn Star.