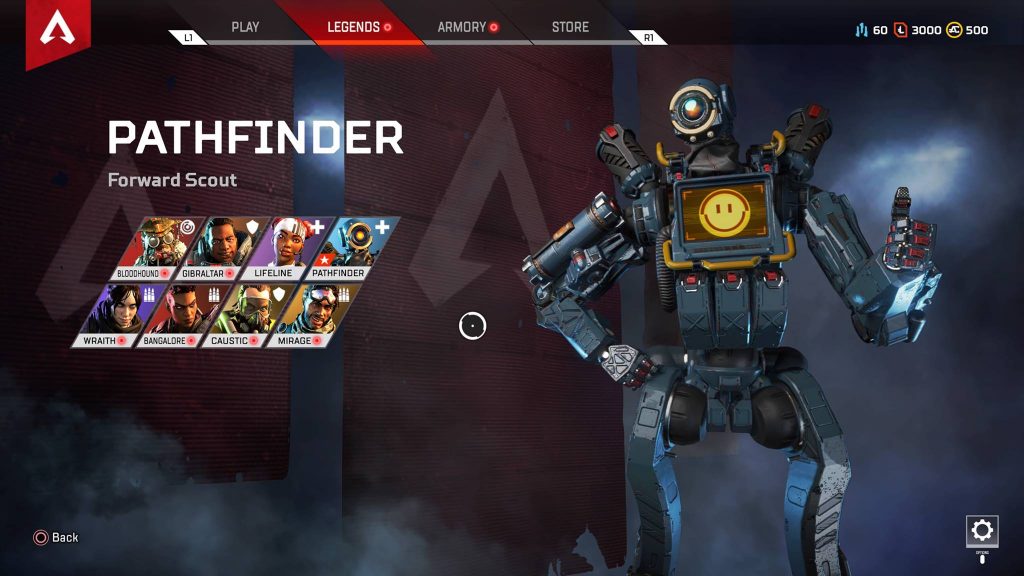 It feels rather odd to make a review for a free to play game, after all, it’s free, you can always download it and try it for yourself should you want to gather a verdict. There is also the issue of the live service model that EA is touting with it’s take on the Battle Royale genre, where it’s almost impossible to judge the game based on its vanilla iteration. However, Apex Legends has proven to be something a bit more than the usual, it’s a bit good and after a month of playing, we feel that it is now fair to tell of our thoughts on the game in this vital stage of its existence.

First, to address the meme, Battle Royale games are well subscribed at this stage despite only being in a relative stage of infancy. Ever since PlayerUnknown’s Battlegrounds, it seems that almost every developer or publisher has been falling over themselves to grab themselves a slice of that rich money pie. Very few however, have been able to maintain a tenure friendly experience. Games such as Sony’s H1Z1: King of the Kill, The Culling 2 and Islands of Nyne have all suffered in trying to make a lasting impact beyond their initial launches. Falling in favour of bigger and better tuned experiences such as Fortnite and Call of Duty Black Ops 4. It was only a matter of time before EA tried their hand at this and many would have expected it to first arrive in a game such as Battlefield V. However, somewhat surprisingly, Respawn decided to drop Apex Legends out of the blue, a brave move for another Battle Royale title with AAA sensibilities.

A brave move indeed, as releasing a title or project in the gaming industry without prior fanfare has been a little dicey in the past. This does seem to have paid off however, Apex Legends has taken the gaming world by storm, offering something that an experience that seems cooler than Fortnite, with the character lead appeal of Overwatch at the same time, while also not being bogged down by an overabundance of the usual EA monetisation practices. Thankfully eschewing the pay to win mechanics of games such as Battlefront II and keeping the extra purchases cosmetic. A fair enough trade when you consider that there is no initial lump fee to access the content. 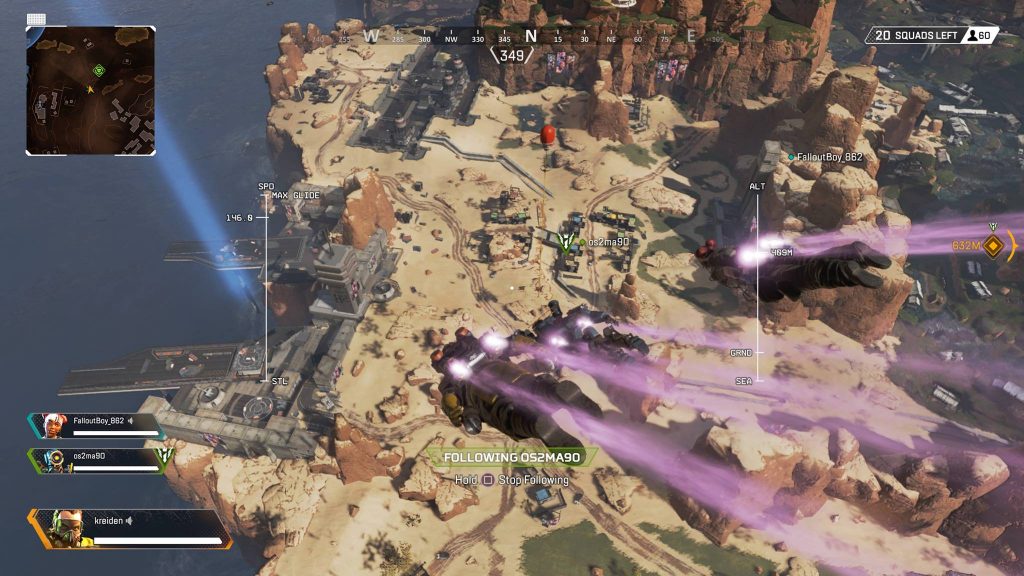 So what does Apex Legends do differently besides its more adult friendly exterior and sci fi undertones? The key is within the gameplay. Taking root within is the heart of Titanfall, the fan favourite series from Respawn that has previously had trouble catching a break. The familiarity of the gunplay is almost immediate. Weapons fire straight and a great mix of heft to mix in with the requirement of accuracy to get the job done. The fast-paced traversal also returns, albeit in a more condensed form, the lack of wall running is mixed up with a sliding mechanic that allows your character to descend the hills and cliffs quickly, there is also a vaulting system that allows you to clamber up short structures to gain a vertical advantage. It feels great in motion and wholly natural at the same time. I do feel a slight pang of disappointment at the lack of a full wall running mechanic, but still, it feels a hell of a lot less rigid than most games of this ilk.

Also rounding off the gameplay angle are the legends themselves. These characters act as your classes and heroes throughout each stage and bring their own tools and tricks to each round. Lifeline for example has the ability to throw out a healing drone that gives health to those nearby. Pathfinder can utilise zip lines that allows him to get around quickly, he can also use radio towers that lets you know where the next circle will be, so you can get a head start and Gibraltar, the tank class is equipped with a shield that allows him to soak up damage, keeping in play for a lot longer.

Each of these characters also enjoy an ultimate ability which unlocks as you survive. These range from drop pods with randomised loot, calling down air to ground missiles to blanket an area and utilities such as a zip line that the party can use to drop in on an enemy (or escape). A fair amount of kudos must be given to Respawn here, at no point in my gameplay did I experience a trend where one character exceeded use over others. This is quite an achievement, as even in the best character lead games, there is always an exploited or overused character due to some sort of meta advantage. Instead, everyone seems quite balanced and while there is still lots of chance for this to happen in the future, all credit should be given to Respawn for keeping this at the forefront of design. As an additional note, not even the paywall DLC characters are overpowered in any way. It’s great to see a game in which any character choice is viable. 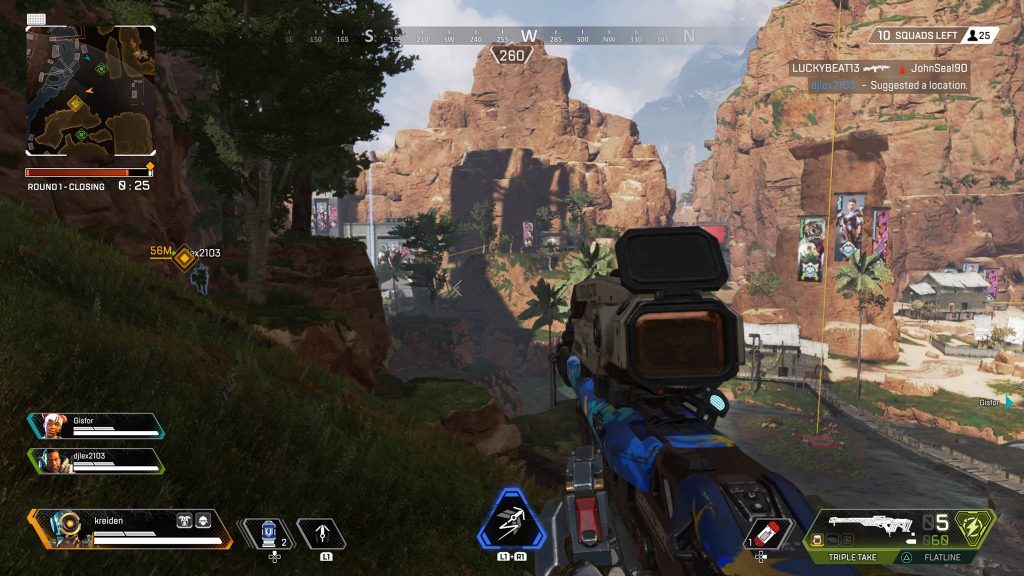 As Apex Legends is predominantly a team game at this stage, the character powers and traits play quite nicely with each other, providing plenty of combination possibilities with hero abilities and strategies that surround them. Flattening an area with Gibraltar’s air to surface missiles while zipping in on Pathfinder’s group zipline makes for an epic moment when moving in a trapped enemy squad that is cowering in a hut. Time will tell whether the balancing will continue for solo play, but for now it feels great.

Of course, being a team game with squads of three can be worrying to some. There is always that burden of undue pressure when playing a team game with randoms online. But Respawn have taken this into account and provided a system that allows those without microphones or those who choose not to use one to communicate with their team. The ping system is the core of this and essentially does all the necessary talking for you. If you want to let someone know a good weapon is close, ping it. If you spot an enemy off in the distance, ping it and various other things becomes second nature. While it does not replace voice chat overall, it does lessen the frustration that comes from those that play coop titles without a headset.

Another great mechanic that isn’t currently see anywhere else in the Battle Royale space, is the ability to bring back fallen comrades from death. You get the usual revive mechanics of course, however, if a team member fully carks it, then you can grab their beacon and take it to a nearby dropship device that summons them down again from the sky. This has led to some great moments for me while playing. Especially when you are the last one alive in an area surrounded with enemies and you must make that mad dash to the signal post before being discovered yourself. It also takes the sting out of early confrontations where you land without a weapon in hand and you get battered by someone with better luck at that moment. 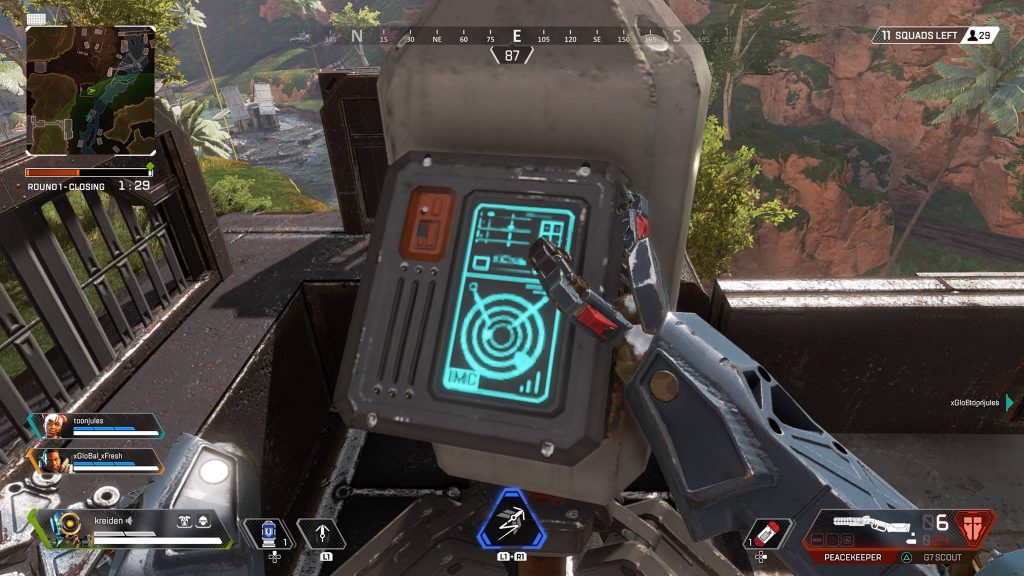 The real meat of the Battle Royale however, is the map you play on. Its key for tactical manoeuvring, looting and shooting after all. At time of writing, Apex Legends only has one map to its name, Kings Canyon which provides a varied and vast battleground to play on. The areas in this map are quite diverse, but always feel congruous to the next, with higher tier loot locations being marked by industrialised sci fi architecture and dropship zones. In between these pockets of militarised metal are some great looking vistas, swamps and even the skeleton of a giant beast that has seen a shanty town built around it. It’s one of those maps that feels familiar after around fifty plays but has enough variety to get you past a few hundred.  The distribution of loot for this map seems fair and it is not large to a point where you need to chase the game ending circle each time. Just like everything else in the game, it feels balanced and considered.

All in all, Apex Legends is looking to have one of the best starts in Battle Royale history. Respawn’s silence on the game has been a boon to its success as it is now positioned as a nice surprise that can only get better through free content updates. It may not be Titanfall 3, But for a Battle Royale game, it’s certainly the next best thing.

Apex Legends
9 Overall
Pros
+ Great game feel thanks to the excellent gunplay and traversal
+ Admirable attempt at eschewing the need for microphones with the ping system
+ Microtransactions are purely cosmetic, no pay to win stuff here
+ Pretty well balanced, which is rare for a character shooter
Cons
- Would like to see a bit more of that Titanfall influence
- Servers can sometimes be a bit choppy
Summary
There are many free to play Battle Royale games out there that are vying for your attention, but Apex Legends takes the genre to new heights with its superb gunplay, Moreish game loop and a superb communication mechanic.