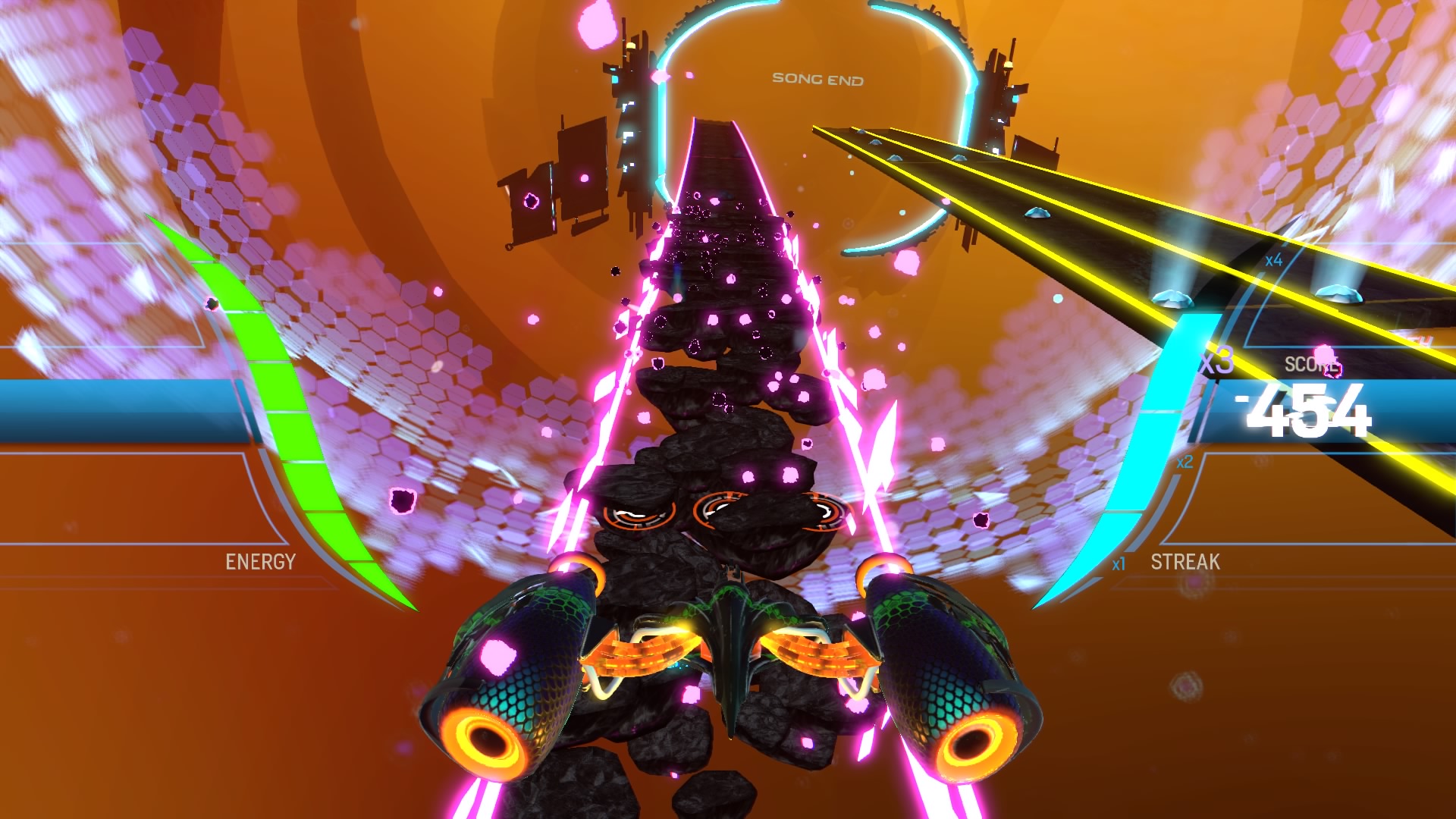 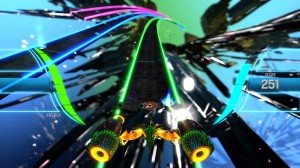 A few years ago, rhythm action games were hugely successful.  The Rock Band and Guitar Hero series spawned countless iterations before the public lost all interest and while both series recently debuted on the PS4, no one particularly cares anymore.

Before that, Harmonix (the developers of Rock Band and the early Guitar Hero games) were lighting up the PS2 with Frequency and Amplitude, both of which established the now common ‘flying into the screen’ path where notes are laid out and have to be hit correctly as you pass by them.

Amplitude was always a bit cooler than the Rock Band and Guitar Hero games especially for those of you who love a bit of rhythm action gameplay but don’t want to stand there tapping buttons on a Fisher Price guitar.  This is reinforced further with bright neon graphics and an electro-heavy soundtrack, although Amplitude on the PS2 did also license a few guitar bands such as Slipknot and Papa Roach (2003 was nu-metal hell).

The game itself is similar to Rock Band Blitz in that each level is a song and each song is broken down into tracks that feature its various instruments (so there will be a track for drums, another for bass and so on).  You clear parts of each track by hitting the right notes (that appear in one of three positions – left, middle, right – in the track) at the right time and then you skip across to the next available track. 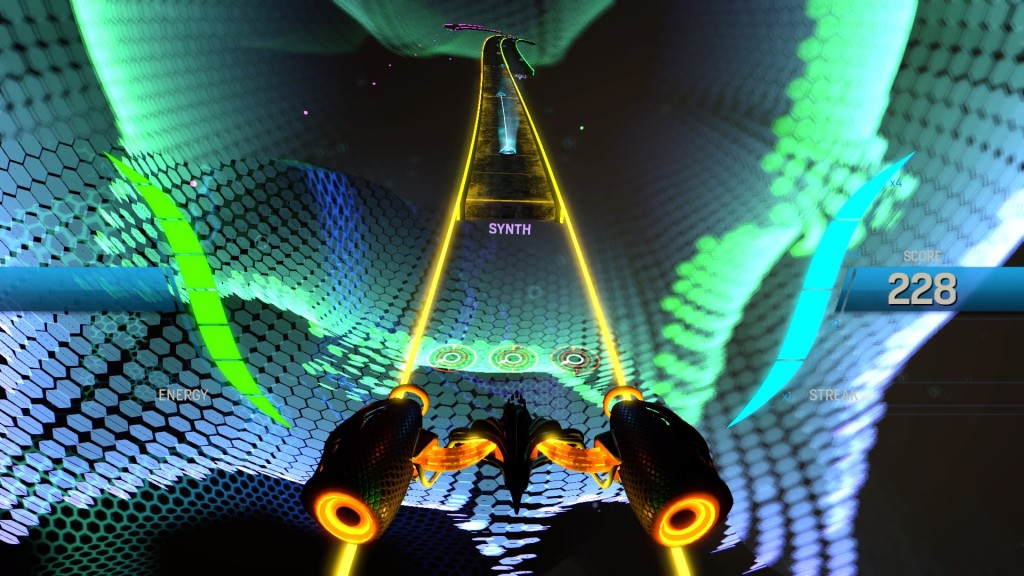 The goal ultimately is to keep your multiplier up by not making any mistakes.  Power ups come and go that are mostly helpful but success is mostly about identifying the beat of each track and following it accurately.

Unlike the original game, Harmonix chose to go down the crowd-funding route for this remake and while that has allowed them to release a game that may never have made it onto the PS4 otherwise, it has also affected probably the most important aspect of the game: the music. 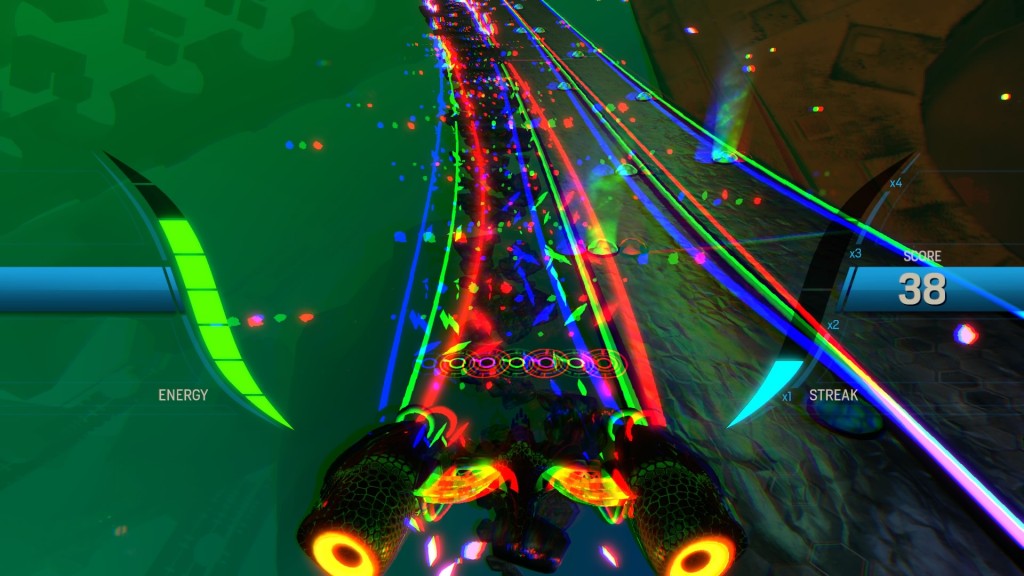 The game’s thirty or so songs are a mix of in-house tunes by Harmonix and some licensed stuff that you’ll not have heard of unless you are really up on games composers.  While the game now focuses almost entirely on an electronica sound (while shifting to drum and bass, electro and EDM) a lot of the music really isn’t that good.  The fifteen tracks that comprise the main campaign mode are a weird mix of weak vocals, complex beats and music that, at times, sounds like it was put together on Dance eJay (if you remember that).

There are some high points, and the non-campaign songs tend to be a little better, but then you run into the other problem.  In Rock Band Blitz (which is probably the best game to compare this to), you could still hear the full song even if you weren’t playing certain tracks but here the music drops out which makes everything sound like the worst remix you’ve ever heard.  Also, for whatever reason, I just don’t feel as connected to the music when I’m pressing the buttons.  With Rock Band Blitz, you could almost play songs by feel alone but there’s a slight disconnect here and that’s maybe down to some of the very weird arrangements the songs have.
That said, by keeping the music dance-based it does focus things a bit.  It’d feel a bit odd to suddenly be playing along to some Foo Fighters bullshit in this kind of environment and while Rock Band Blitz was the better game, Amplitude does work as a simplified version.

This is apparent in the gameplay which does away with the myriad of power up options and instead just gives you a small amount (that you can’t choose).  This means you can focus more on the patterns you need to hit and not worry too much about scoring strategies.  I actually prefer it this way.   Each track has three areas to hit (as opposed to Rock Band Blitz‘s two) which means you’ll need to experiment with the game’s many control schemes to find one that works for you but it’s still pretty easy to get into.

Visually things are a mixed bag.  As with the original Amplitude, this is all about the futuristic setting and bright colours, and for the most part that works well (and suits the soundtrack).  There isn’t really any variation though so you’re never blown away by the backdrops which is a shame. 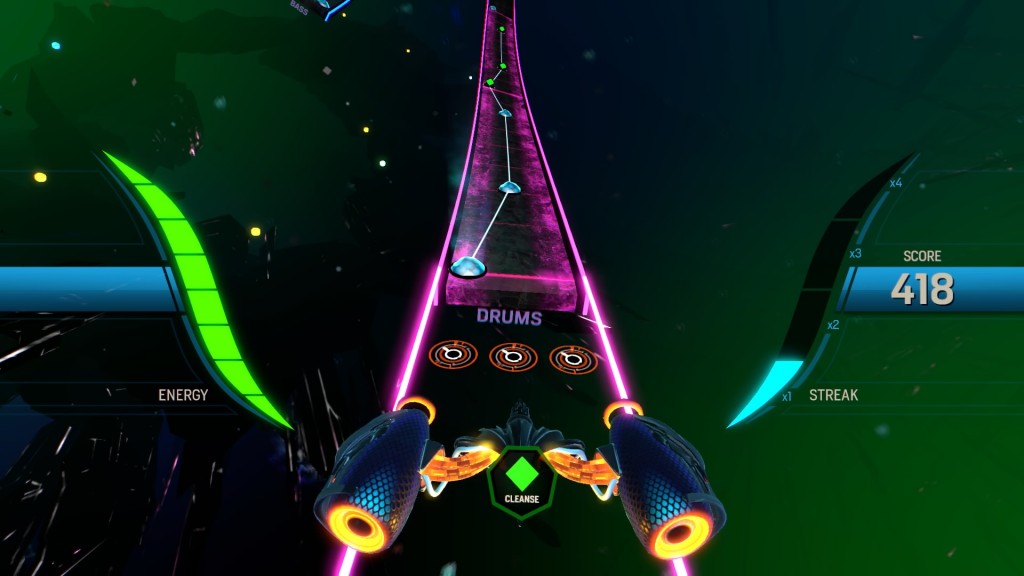 Sometimes it can be nearly impossible to know what note to hit next if there is a big jump between tracks (which is why you’ll need to practice songs to perfect them) and the last song of the campaign throws in a mental visual distortion that makes the whole thing barely playable.  Bit of an odd design choice.

Fans of Frequency will be glad to know that you can switch the flat track layout to a tunneled one if that’s your preference and this is a nice touch to be fair. 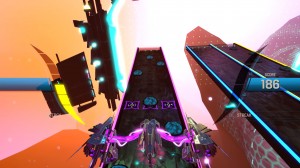 Although it is very easy to pick out the flaws, and you can pretty much trace them all back to the game’s relatively low budget, Amplitude is still a good game, especially if you’re a fan of the genre.  The game retains the playability of the original and is quite addictive and the smaller setlist means there is more scope for perfecting the game (that said, Expert difficulty is balls hard and I’ve not even unlocked Super difficulty yet).

It may not be the obsession that Rock Band Blitz was but if you want a solid rhythm action game that is great to pick up and play, Amplitude is as good as it gets on the PS4 right now.

Review 0
7 Overall
Pros
+ Enjoyable, solid gameplay + Simpler interface than other games of the genre + Focused soundtrack
Cons
- Soundtrack is pretty weak - Non-activated instrument tracks are silent which makes the music sound even weaker - Some dodgy choices visually
Summary
Amplitude was always going to be a good, solid rhythm action game coming as it does from Harmonix. The soundtrack is weak though and after being spoiled by Rock Band Blitz last generation, this is a bit of a let down.