From Nottingham-based Fallen Tree Games by way of Curve Digital comes the forced 3D perspective open world game American Fugitive. The devs have some AAA chops including the likes of TimeSplitters & Crysis on their CVs, and it shows in the production values of this accomplished debut, combining on-foot exploration with drivable vehicles as you seek to solve your father’s murder.

For this long in the tooth reviewer, it even brings to mind the likes of the very first Grand Theft Auto back in 1997 in terms of some aspects of core gameplay.

The game opens with a short sequence in which you learn the basic mechanics of casing a house out and using items to gain forceful entry. You’ll arrive at your father’s house to find it locked as a car tears away from what turns out to be the scene of a crime. When you smash a window and climb in you’ll discover your murdered dad and find yourself framed by corrupt police in the pocket of the villains of the piece, initially a redneck family. 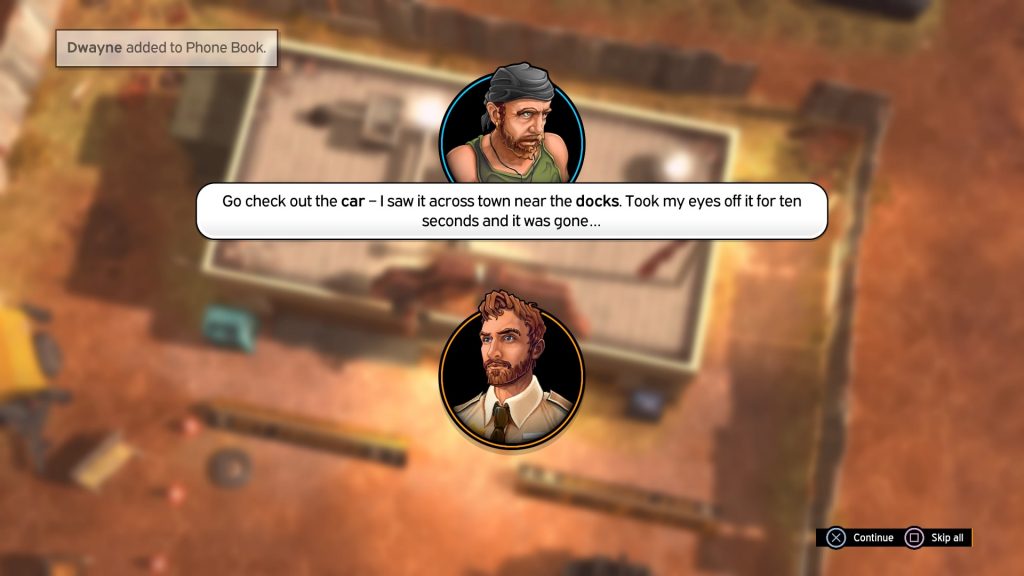 You’ll find yourself sent down for a crime you didn’t commit and eventually break out of  prison, your way out via a sewage pipe that you’ll bust into using various tools. Your first task is to rid yourself of your bright orange prison issue boiler suit as it attracts the wrong sort of attention.

At the outset, you’ll progress the story by completing missions for your friend Dwayne who runs a junkyard. After a while you’ll encounter Ana, a thief with a heart of gold and she along with your scutter pal will see you through the opening chapters.

Along with a cast of supporting characters including the aforementioned redneck family (who also happen to make up some of the police force), Fugitive paints a good image of the boondocks. 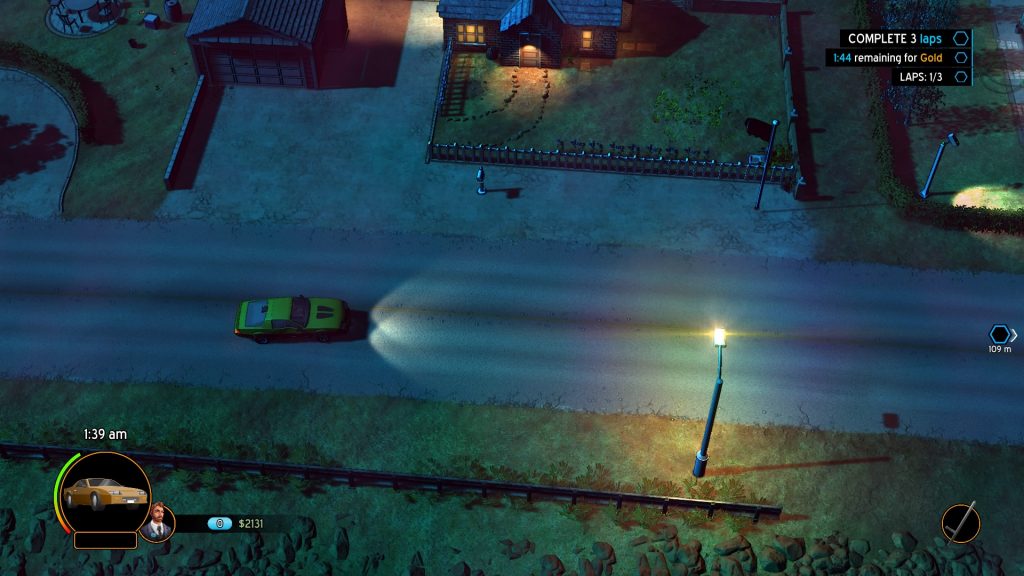 You’ll spend a fair bit of time on foot as you rob houses if you choose a life of petty theft. You can case a house out by tapping

and smash a window once you’ve clocked an entry point without anyone in the room you enter. Unless you’re lucky enough to encounter an open window, you’ll generally alert the police upon entry. It means you must be decisive in your actions as the timer before their arrival ticks down.

A better approach that doesn’t alert the police is to encounter the householder outside and knock them out with a view to stealing their keys. You can then pillage away without being confronted, though only if you’re not discovered by a passing police cruiser who clocks the unconscious householder. Though you can drag them out of view if you’re being thorough.

When you encounter someone as you rummage through a house, you’ll be faced with the choice of running away yourself or confronting them. Depending on what weapons you have, you’ll be told what your chances of success are. Shotguns good, baseball bats not so much. There’s still the chance you can be overpowered by the occupant all the same. If you have sufficient time remaining, you can let them go if you wish. 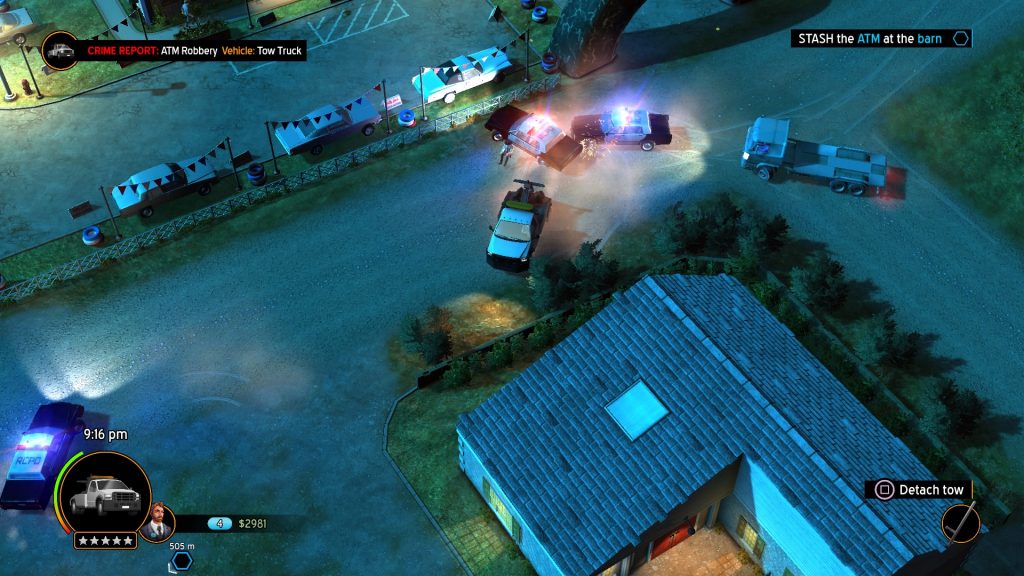 The same mechanic is used in store robberies, the plot gently easing you into a life of crime by pricing an essential item you need beyond your initially modest means. Upon entering a shop you’ll have the option to shop like a good law abiding citizen or hold up the store in question. More often than not you’ll choose the latter option rather than picking up ten Kitkats and a motoring atlas. One particular robbery location being the only way to access one of the hundred collectible stashes  that boost your cash reserves.

Once you’ve robbed somewhere you can fence high value items at a local pawnbroker. It’s a handy way to get a quick cash injection. In addition you will find paintings that you can flog to a pretentious art dealer type. As you complete missions you’ll unlock upgrade points that will allow you to choose perks ranging from increasing your initially limited inventory space. Our favorite perks have to be the automated casing a joint option where you’ll scope out a building as you approach it, or the radar that bleeps when you approach one of the hidden caches. 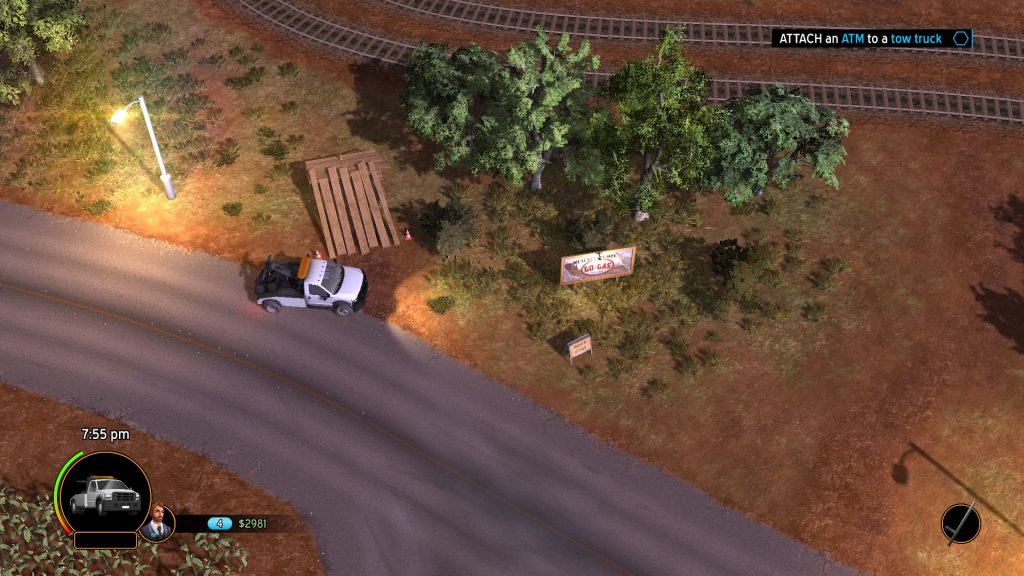 While carrying out a robbery you’ll often find safes that can’t be accessed without knowing a crucial tidbit of information from another location. One notable safe has a note in the same house which says the combination is the birthday of a deceased wife. Cue a trip to the graveyard looking for headstones with the dead woman’s name on them. Little details like this pepper American Fugitive and make it feel more like a living world than any animated cutscene ever could.

Another incidental detail that adds to the atmosphere is the pioneer-style windmill pumps with the counterweight, perfectly animated. One more that we enjoyed was while driving a hearse. Without a body on board you can fling around the vehicle without any real incident. However when you carry out a rare piece of legit funeral director business for the mob front you end up needing help from, the coffin on board shifts both visibly and audibly when you turn with too much enthusiasm.

The driving is a treat, perhaps the devs had a hand in the Burnout series during their Criterion stint as their CVs also include late-era PS2 game Black. At first it seems a little idiosyncratic, but you’ll soon get used to controlling your vehicle. There are twenty-eight distinct types ranging from a slow tractor through massive diggers and tow trucks, to speedy ’80s muscle cars that ape the Camaro IROC-Z in terms of looks and performance. The driving models for each are different as well as being affected by terrain and prevailing weather conditions. 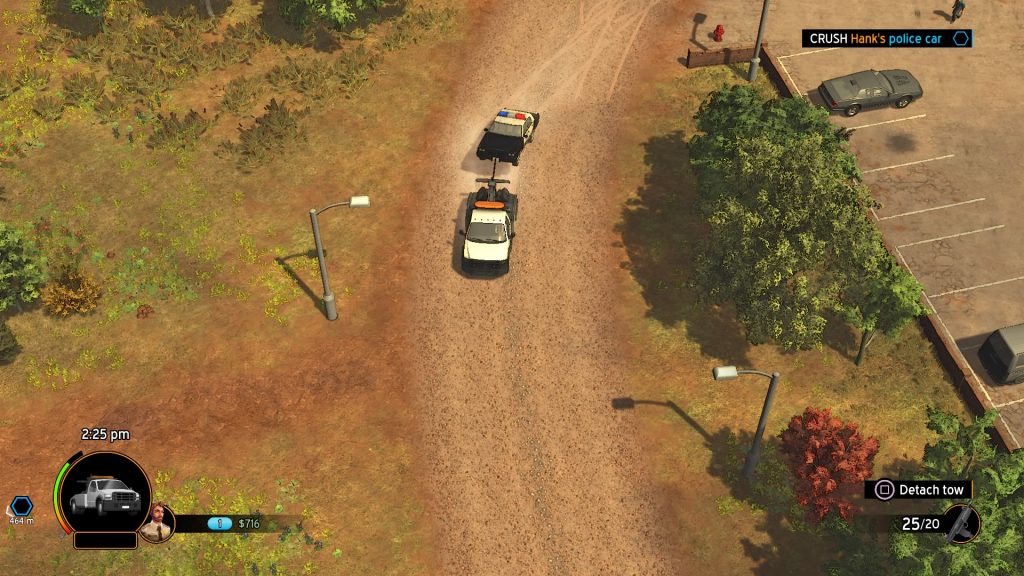 When you drive tow trucks you can hitch up to vehicles while in motion. This is particularly fun in the middle of a police chase  when you have a police cruiser on your tail. Not exactly realistic sure, but it is a whole lot of fun.

You’ll happen upon time trials that let you try out different vehicles.  Some are three lap circuit races and others are point to point where you need to race to one location and get back in time to secure a medal. The gold times are pretty stringent and you’ll need a pretty much perfect attempt to secure a gold, but when you do it is oh so satisfying. These time trials are pretty compelling and nail that one more go feeling, we retried one to secure gold.

Like the first GTA and subsequent sequels, the whole map is unavailable for you to explore at the outset, bridges to the remaining areas gated with armed police roadblocks. It’s a well used trope, but don’t worry, there’s so much to do you’ll barely notice you’ve not left the top left side of the game world to start with. Another similarity cribbed from the GTA series is special jumps to do in your car. Land cleanly and with sufficient distance and you’ll be deemed to have completed it. Finish them all and you get a trophy. 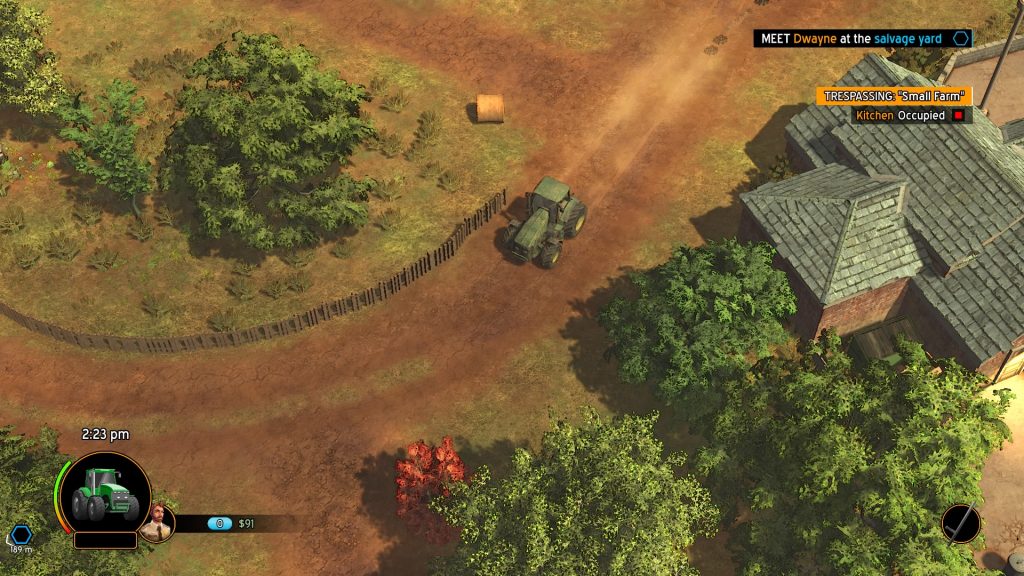 Speaking of which, the trophies are generally well balanced, those relating to reaching three hundred km/h and jumping seventy metres being a fun shout out to this excellent song. There are story related trophies too, they come with story progression anyway.

The negatives are few, but there are some. One early confrontation was us literally taking a stick to a gunfight and we came off worse on multiple occasions. In addition some missions can go awry just by sheer bad luck, clip a crash barrier or scrape past a car and you’ll suddenly become a person of interest to local law enforcement. Before you know it you’ll have a five star wanted rating and be the focus of an escalated police presence. 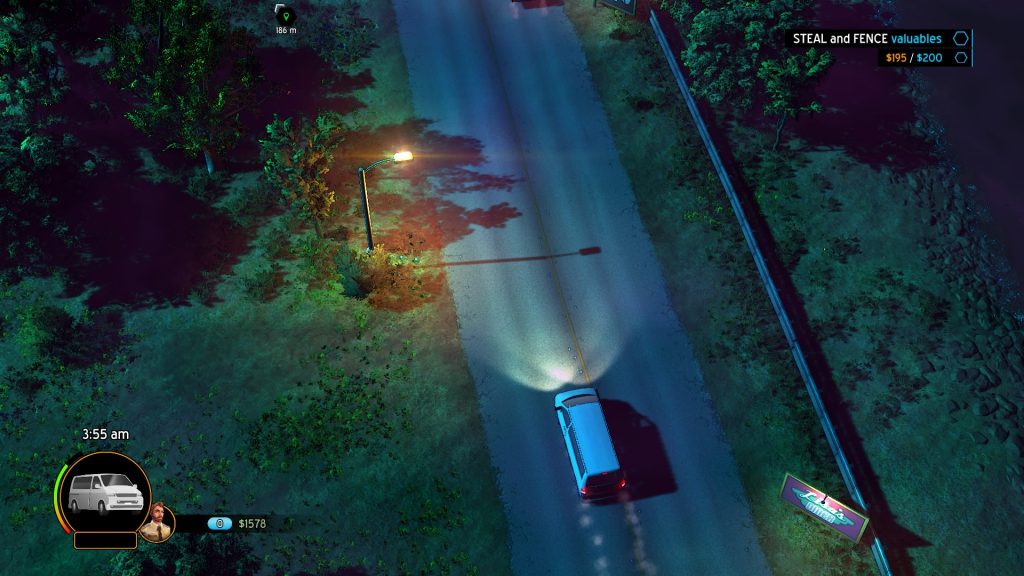 On that subject, wanted ratings can be a bit erratic in terms of their veracity. Foot patrols will be on you like a bloodhound even if you’re hiding out of sight. Bafflingly we escaped one five star rating by hiding in a similar bush, even as helicopter searchlights swung back and forth. It can be a little inconsistent anyway.

American Fugitive isn’t startingly original but what it does, it does well. It’s addictive and a fine way to spend several hours. The plot is fairly derivative, certainly nothing that’s going to win any awards. But in a game of this sort you’re not here for that anyway. We feel like we’ve barely scratched the surface and will keep playing this for a while yet.

American Fugitive
8 Overall
Pros
+ Good driving model
+ Time trials are addictive as hell
+ Cute trophy names
+ Detailed little touches
+ Does a good job setting the scene in an initially small area
Cons
- Plot is a standard revenge tale
- Losing police heat occasionally laughable
- Some missions are a little unbalanced
Summary
An accomplished homage to GTA games of old with some interesting mechanics. Sometimes less is indeed more. We're going to go the distance with this one.