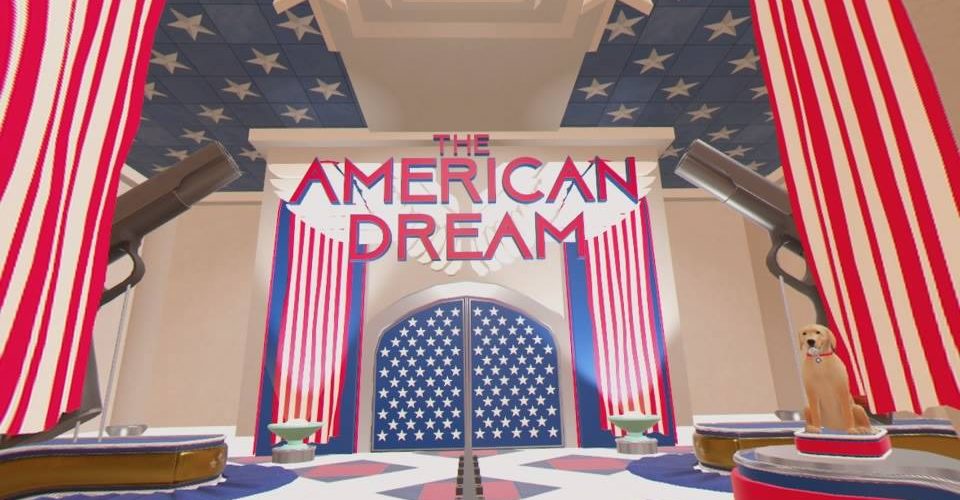 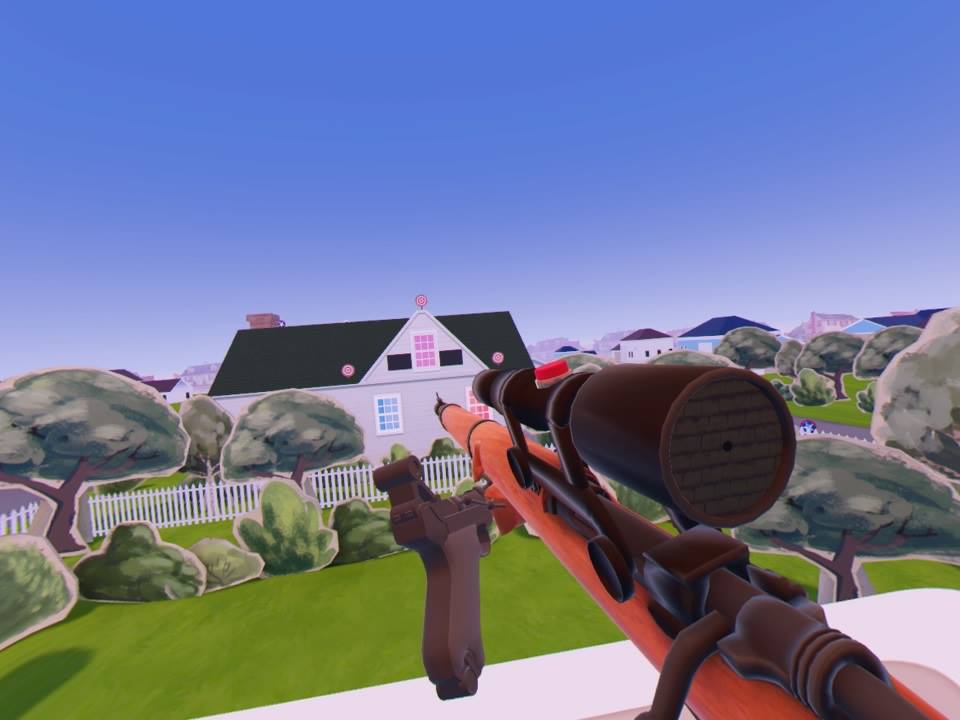 It’s a turbulent time for gun politics. On the one hand you have those that would bemoan the idea of owning a firearm for obvious and valid reasons, down to the very nature of what weapons are designed to do. On the other, you have those that are devout and adamant that owning a gun is a right that is woven into the fabric of their being and to take away this right would be a breach of their safety and freedom. I’m not going to go further into this as a debate as there are plenty of places for that and PlayStation Country is not one of those places. However, here is a game called The American Dream which is a straight shot parody of gun loving culture.

The American Dream is set as a fairground attraction in a similar vein to the classic ‘world of tomorrow’ rides that painted idealistic futures that may come to pass. Instead of focussing on innovations and technology however, the ride is all about alternative applications for guns in everyday scenarios from the cradle to the grave. The game is a shooting gallery where each milestone of your life is a different minigame that offers you different ways to utilise weaponry to progress. For example, you start out in the crib as you dual wield pistols to shoot your way through rudimentary quizzes and targets, this then moves on to a later childhood stage where you return balls with bullets in a game of catch with your idealistic cardboard cut-out father figure. 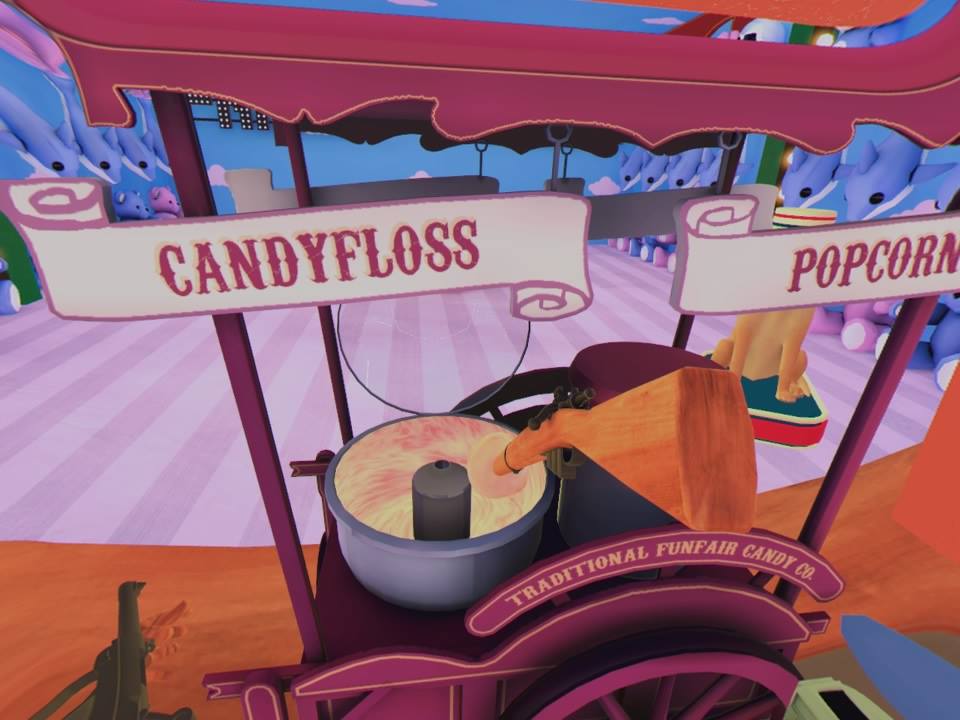 Each section is narrated by Buddy Washington who is essentially one of those guide dogs for the blind statues that used to sit outside of pharmacies, but with a speaker box and a ‘can do’ patriotic attitude. Buddy is by your side throughout each stage of the ride and exists purely for exposition in each scene to provide overly optimistic and shlock commentary on how you are doing in each scene.

As a spoof of gun ownership and unwavering patriotism, The American Dream is a good laugh. It brings to light some of the arguments that have been made in favour for firearms and applies a distancing effect to add a surreal element to the proceedings. However, as a game, this is where things start to come apart at the seams. The American Dream is two hours long and a lot of this time is spent in between scenes, either through listening to dialogue from Buddy or waiting for your turn to start shooting. 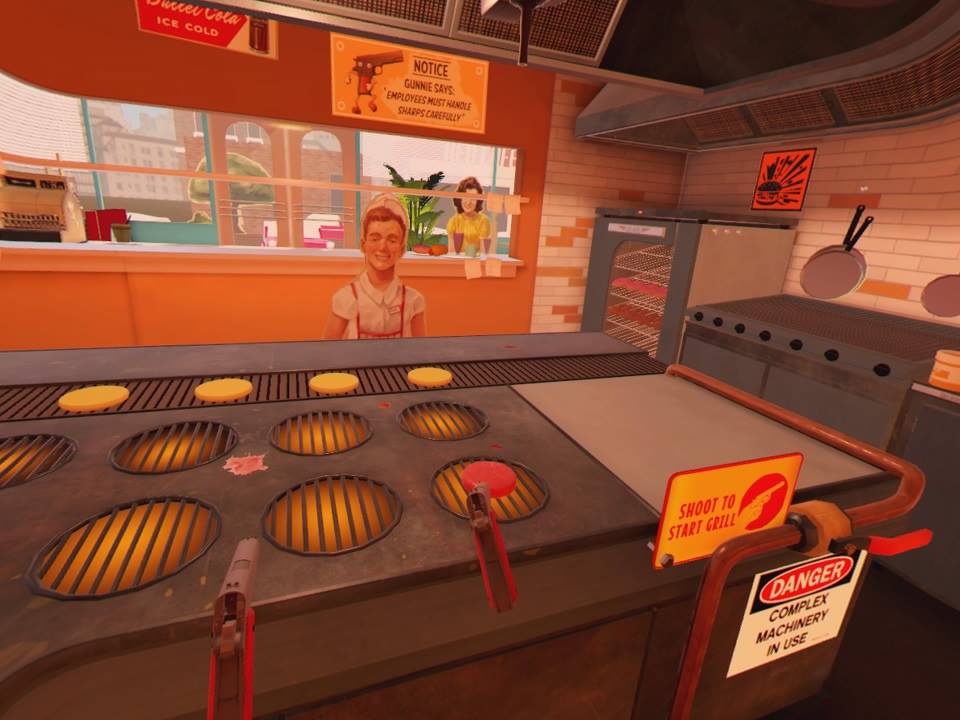 When you do open fire, the level of fun you have will depend entirely on the scene and these scenes can be a real mixed bag. Everything you do is based on pulling the trigger at things on the screen and this can sometimes mean mundane activities such as cleaning a bedroom by shooting articles on the floor or putting holes in bagels by ventilating them with a bullet. There are very few moments in the game where you must do anything that requires time, precision or skill which feels odd for what is essentially a shooting gallery game. The one major exception to this is a scene where you must flip burgers and serve them to customers while making sure that they are not over or undercooked. Some scenes are practically filler and require just a couple of actions to complete. The best example of this being a dinner scene where you propose to a significant other, you are mostly just sat in place while characters talk around you and you complete it by simply shooting at your plate a couple of times.

As a VR title, The American Dream is a fair experience with the shooting being the main draw. There are few uses of the perspective to speak of, but there are times where it is used effectively, like when you are being fed by your mother in the cradle scene by moving your head towards food at the end of a barrel or during a prom scene where you dance with your date by flailing your motion controllers about. It’s one of those games that feels like it would be a good way to showcase VR to your friends as it ticks some of the right boxes and tries to use the technology in unique ways. However, due to the sedentary pacing and moments of mundanity it doesn’t quite meet the criteria as it feels longer than it should be, which is very strange for a two-hour game. 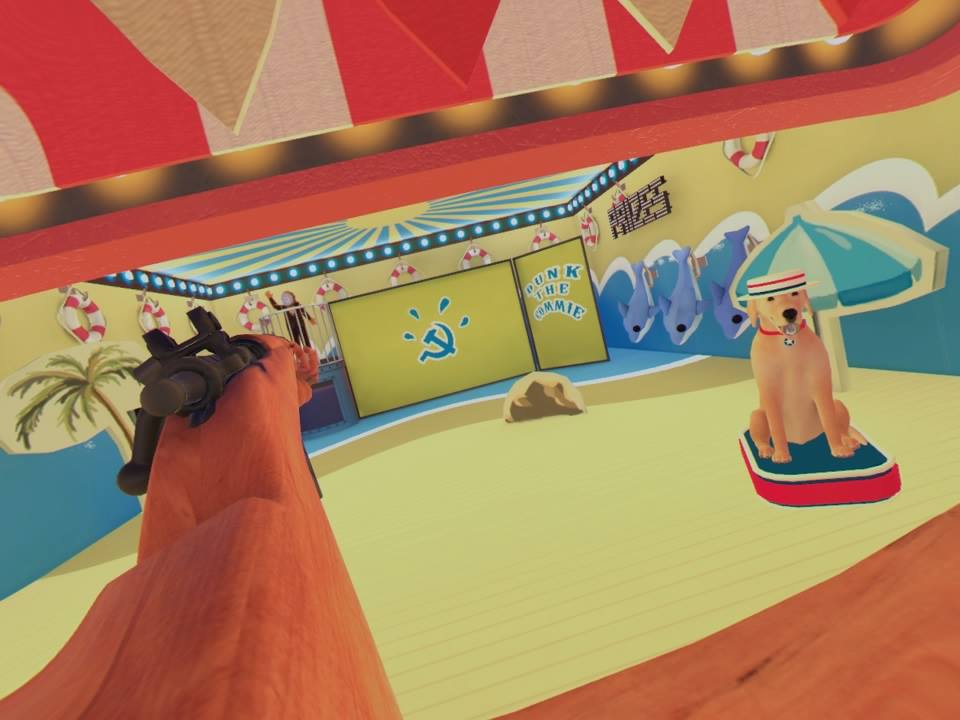 As for replayability and challenge, The American Dream is light on both. As previously mentioned there are few times where you really need to do anything that requires true skill, but there is a money earning system built in to sate completionists. There are also hidden targets in each stage and the ability to select certain chapters throughout the experience, but there is little reason to unless you are hunting trophies. The game is very much a one and done experience and although the jokes can hit home and genuinely raise a smile, after a while they wear thin and the punchlines only ever land the first time.

The American Dream
6 Overall
Pros
+ A fine spoof of the gun loving side of the debate
+ The 1950’s aesthetic lends itself well to the comedy
+ Good shooting controls, despite some Move shenanigans.
Cons
- The pacing makes the game feel far too slow.
- It is often difficult to hear other dialogue when Buddy is speaking
- Some of the scenes seem like nothing more than padding
Summary
While The American Dream is a different and humourous take on the growingly congested VR shooting gallery genre, the overall gameplay does not match up to its wit and political satire. The game is not without merit, however its slow pacing and occasionally boring tasks let the experience down in the long run.