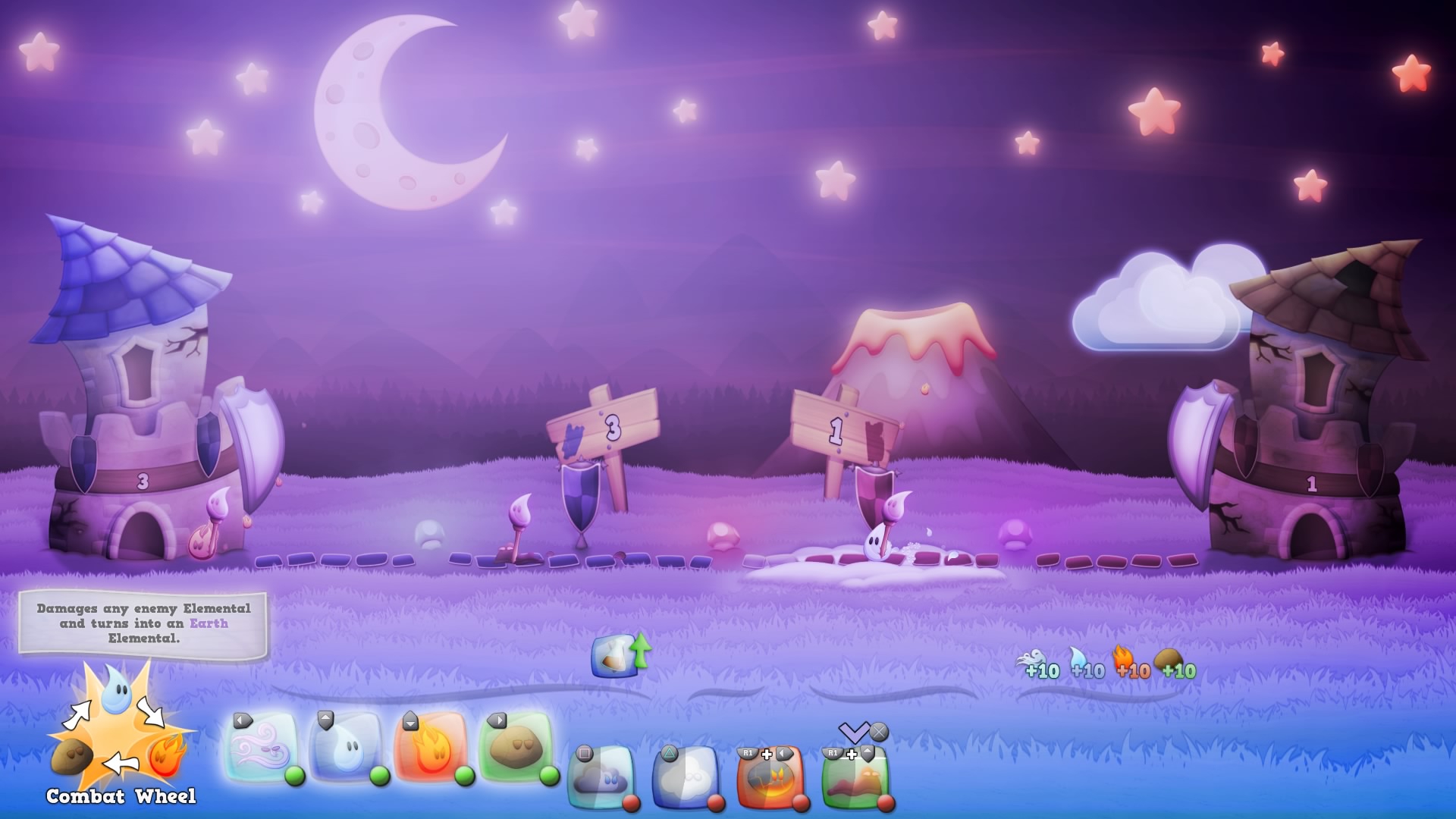 Alchemic Jousts is nothing about trying to make gold from lead, and involves no lances, horses or knights. So I’m a bit unsure why it’s named as it is. What it is about is sending little anthropomorphic elements of nature across the screen to defeat a castle.

The screen shows two castles, one on either side, and you get to choose which element to send out to attack the enemy. Should your element bump into an enemy element coming from the other castle then its a rock, paper, scissors affair to see what comes out on top. The whole rock, paper, scissors circle is played out with fire, water and earth instead. 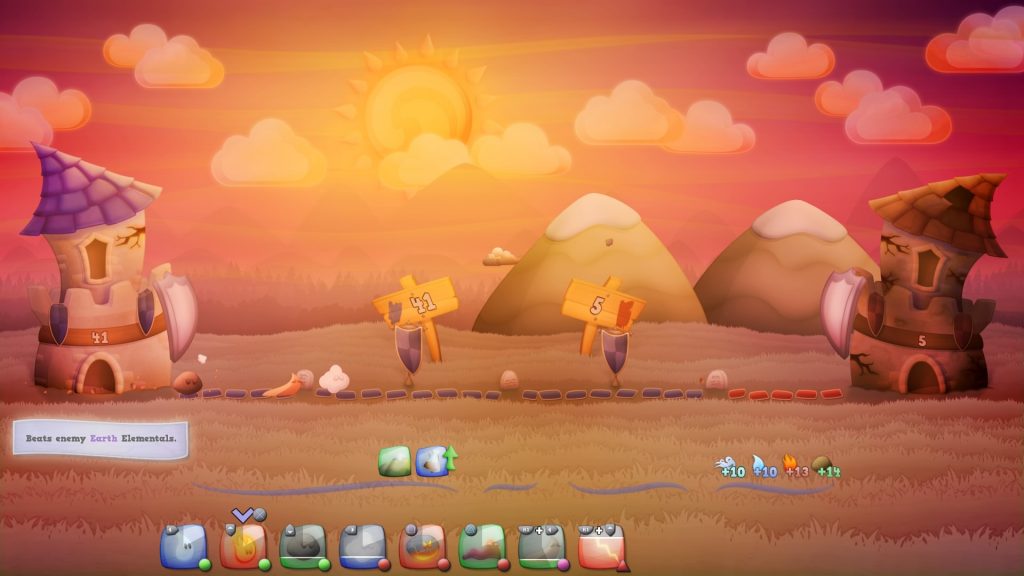 Things start off fairly simple as there are only limited elements to choose from however after each level you get points to spend in the lab creating new elements. This is done through trial and error by combining elements, and there are an awful lot to discover. You’ll be spending a fair bit of your time after each mission doing this. It is a decent system as you’ll be able to naturally intuit some combinations and it had a helpful hint system to guide you to the others. These new elements can then be used in your next mission.

The missions do have some variation in victory conditions but they all fundamentally play out in exactly the same way, attacking from one side to the other. There are variants though, like a king of the hill analog and capture the flag one, along with more straight up combat ones. This mixture of modes does provide some variation but as they all sort of play out the same, things get stale quickly. 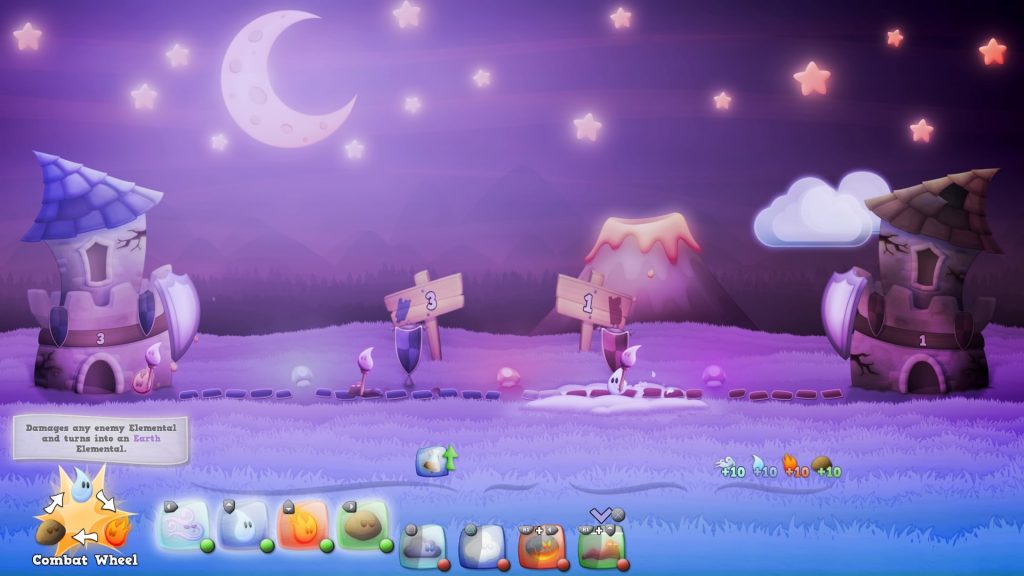 Alchemic Jousts does a solid line in difficult opponents and on the harder settings it can feel unfair, as they blast out the perfect mixture of elements to mess you over. Not only do the enemies seem perfectly set up to block your every move but they often start with more health too. It sometimes feels like the only sure fire way to progress in the harder settings is to grind out the new element types. As a way of increasing challenge this feels unfair and isn’t really enjoyable.

Graphically Alchemic Jousts looks like a flash game as it is all cartoon sprites and bright colours which, whilst easy to understand, end up feeling a bit generic. There is a fair bit of text on screen too, in the tutorial tips, which has a tendency to be just the wrong side of small. 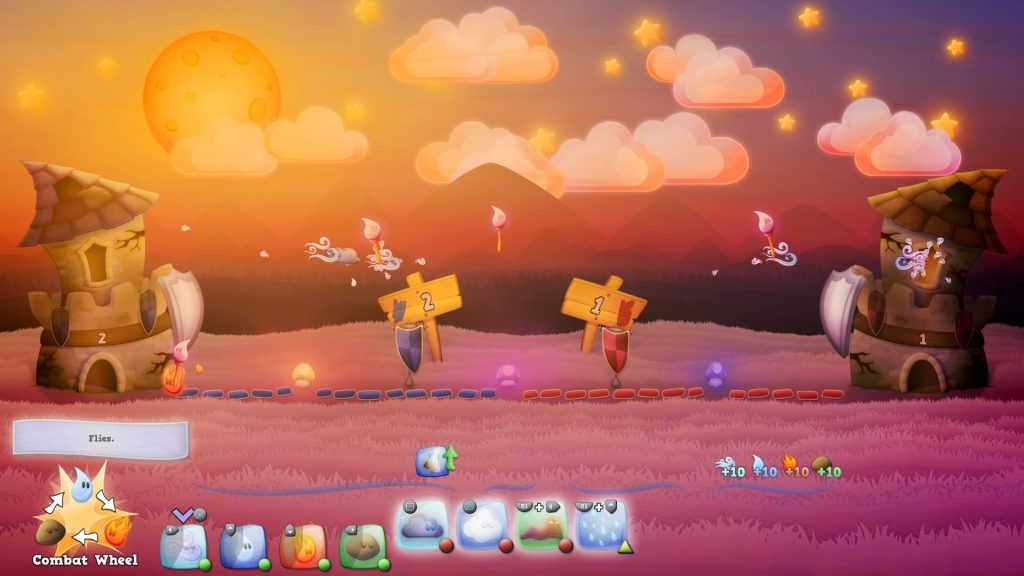 Rounding out Alchemic Jousts is a batch of multiplayer options.  There is couch co-op which can be fun in the unlikely event you have friends who want to play this, but lets face it there are significantly better options out there.  There is also an online mode, but as per usual this was dead when I tried. I do admire the multiplayer options here, but realistically I doubt they will see much use.

Overall then this is a fairly simple game and it is definitely a one trick pony of playing​ rock, paper, scissors. The ability to unlock more permutations of elements as you progress is a nice aspect to the game, and adds some longevity. Unfortunately the enemy AI can feel super difficult and unfair on the harder settings, but on the easier settings there is some limited gentle fun to be had here.

Alchemic Jousts
5 Overall
Pros
+ Easy to understand core concept of rock, paper scissors
+ Nice ability to make new elements
+ Decent amount of levels to play
Cons
- Gets very samey quickly
- Enemy AI feels unfair on the difficult settings
- Text in tutorials feels a bit small
- Feels powerfully average
Summary
Alchemic Jousts is a fairly simple game and it is definitely a one trick pony of playing​ rock, paper, scissors. The ability to unlock more permutations of elements as you progress is a nice aspect to the game, and adds some longevity. Unfortunately the enemy AI can feel super difficult and unfair on the harder settings, but on the easier settings there is some limited gentle fun to be had here.