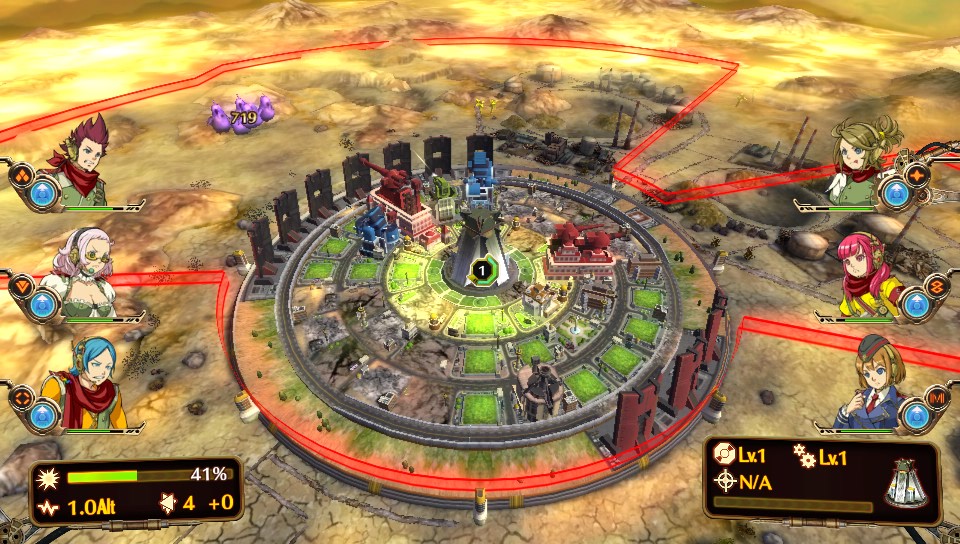 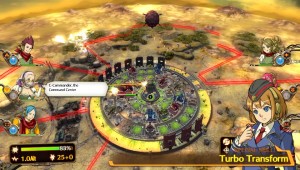 Sometimes a game comes along which defies easy categorisation, and Aegis of Earth: Protonovus Assault is a perfect example.  Not only does it have a title which requires a run up to say, but its also a cross-genre hybrid of a game.  Full of Japanese idiosyncrasies Aegis of Earth is a mix of RTS, Tower Defence, RPG and a City Sim game.  Although this may sound crazy, it all comes together to form a pretty decent game.

Based in a post apocalyptic world, Aegis of Earth gives you stewardship of a city representing one of the last refuges for the human race.  The game plays out over a defined two phase cycle.  The first phase sees you building up your city, managing resources and purchasing upgrades.  The second stage however, is totally different and sees you defending your city from wave after wave of monsters.

The cities are a series of four concentric circles surrounding a large tower.  Each circle has a specified number of building plots, allowing you some level of freedom in how you design your city whilst avoiding the total freedom to be found in a full on Sim game.  These constraints allow the game to keep a sense of pace, and stop it from becoming bogged down.  During your building stage you’ll be juggling different kinds of stats from resident happiness levels to power generator levels.  All these stats need to be monitored, and different buildings, and how much damage you take in battle, will affect them in different ways.

You can build, and upgrade, both residential buildings and offensive buildings.  In order to fund these expansions you’ve got to use a couple of different resources, the first is money collected in the form of taxes from your citizens.  The second are crystals collected from the enemies you defeat.  It’s a well judged balance between the two resources, and you can synthesize a third resource by sacrificing some of your crystals.  This adds a nice little strategy touch to the game, and each decision you make will need to be considered before you commit.  I really enjoyed this aspect of the game, and planning your city and looking at what upgrades are on offer was handled really well. 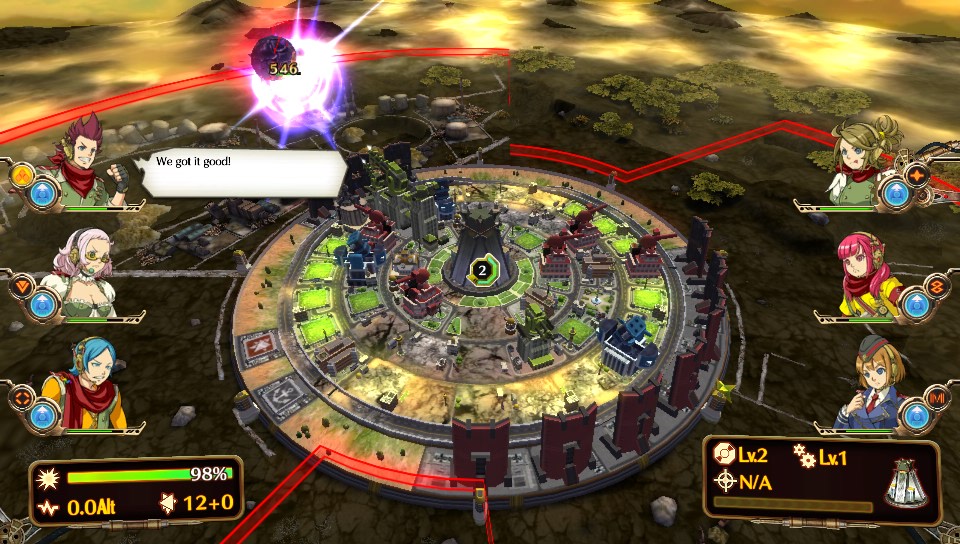 During phase two monsters will attack your city from all sides. It’s up to you to rotate each of the circles of your city to ensure the weapons you have are facing in the correct direction to fire.  It’s a bit like a tower defence game, as the enemies just slowly make their way towards you and you have to pick them off before they hit your city.  Things start off confusing as hell, as you are effectively rotating four aspects of your city, watching for incoming monsters and also judging cones of fire for your guns.  However get past the first battle and things quickly settle down.  The control scheme is elegantly implemented and quickly becomes second nature, and before long you’ll be confidently defeating all in your path.

There is a great upgrade path here, feeding into the one more go mechanic which keeps you coming back.  Weapons and residential buildings can be upgraded, and then modified.  New buildings can be researched, and then used in your next battle.  This whole area of planning and modifying is a very satisfying part of the game.

The graphics come across ok on the VITA and it is clear time has been spent on optimising the experience, and there is often a lot to take in.  Things are a little simplistic though, in particular the enemies don’t have the standout wow factor which would have really had an impact here.  It’s another story with the 2d art work though as this is really nicely crafted.  Outside of the missions there is a lot of exposition delivered in a talking head style.  The art design is typical anime, but done to a high standard and allows you to easily recognise the various assistants available to you.  The story is also fairly standard, but carried off with some decent English voiceover work which was a nice surprise. 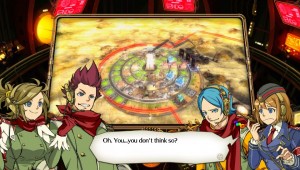 Aegis of Earth is a unique game, with many different facets to it.  It manages to take some pretty detailed gaming genres and moulds them into a fast paced arcade style experience which is suited to the VITA’s potable nature.  There is a lot of fun to be had here, and if you’re up for the challenge of learning something new I’d recommend giving this a go.

Aegis of Earth: Protonovus Assault
7 Overall
Pros
+ Unique gameplay + offers a decent challenge + lots of fun to play + English voice actors is a nice touch
Cons
- graphics are serviceable rather than excellent - things can get a bit confusing early on - the odd mix of genres will put people off
Summary
Mixing up the genres in a post apocalyptic style this is a game which defies easy categorisation. It is part tower defence and part RPG, it offers a decent challenge and is lots of fun to play.