The developers Artifex Mundi are back again with their latest release on PlayStation 4, Abyss: The Wraiths of Eden, another hidden object game. If you’ve been following our site you’ll know that we’ve a certain soft spot for these casual puzzle games. This latest title doesn’t change the established formula and fans of the genre will know exactly what to expect. 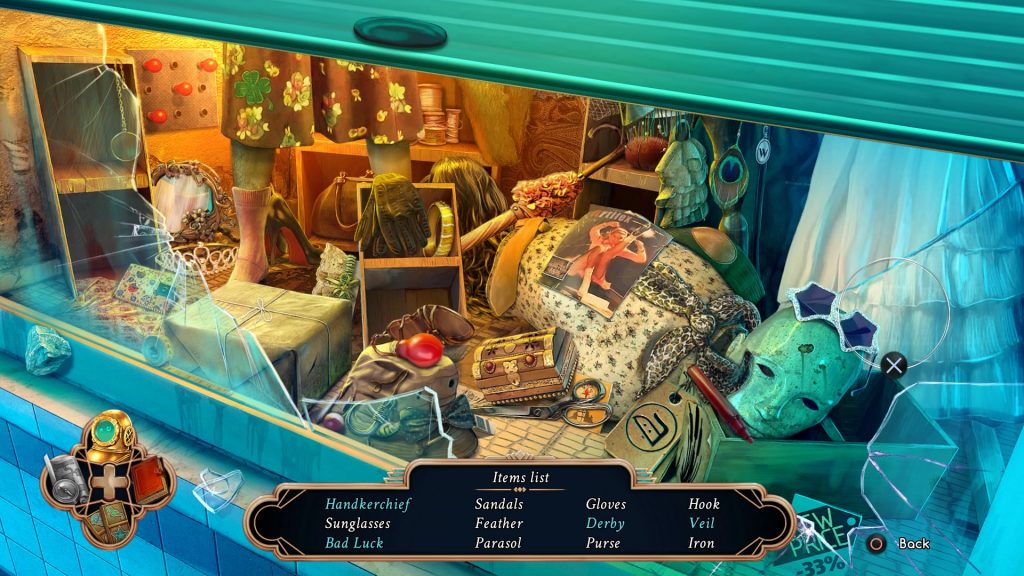 For anyone new to these kind of games Abyss: The Wraiths of Eden is a hidden object narrative puzzle game.  What this means is that you’ll spend the bulk of your time staring at detailed 2D screens trying to identify, from a list at the bottom, objects hidden within the clutter. This is done by sweeping a large circular cursor across the screen and hitting the X button to identify the item.  Its all rather laid back and there are no difficult controls to learn, no real punishment for failure and no real stress.

This time round hidden object puzzles form the main meat of the game and very much signals this out as an earlier release from Artifex Mundi. While there are other kinds of puzzles, the variety on offer isn’t as wide as some of Artifex Mundi’s later games, say Enigmatis 2 for example. The hidden object scenes are also reused numerous times in this game, so you’ll be revisiting the same ramshackle wardrobe until it is practically picked clean. 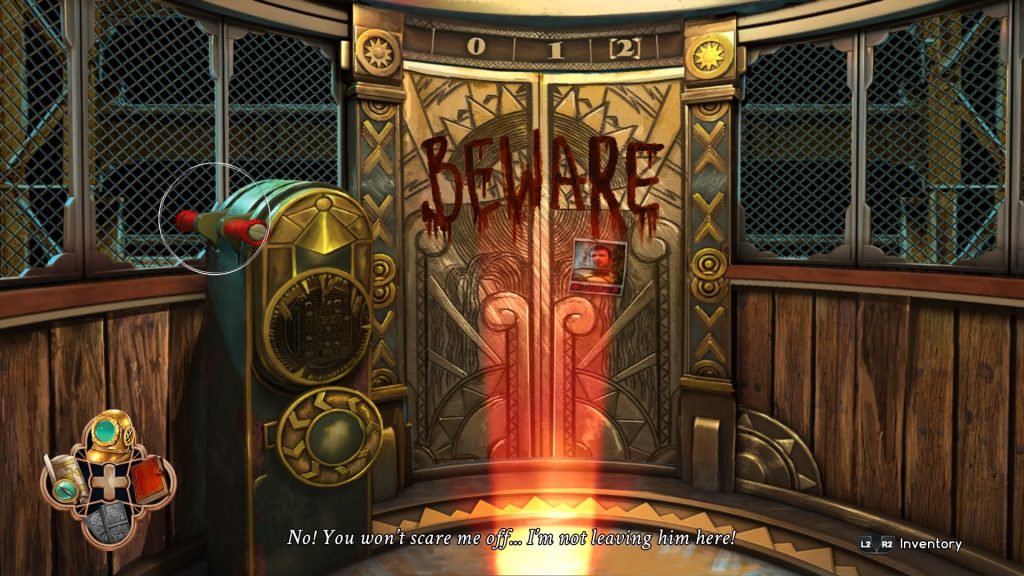 This repetition is a disappointment and I was beginning to get tired of seeing the same locations time and again. Luckily Abyss: The Wraiths of Eden is saved from death by repetition by the fact you can chose to complete an alternative mingame of dominoes instead of the hidden object scene.  Whilst this minigame is fairly simple it does serve up some much needed variety. 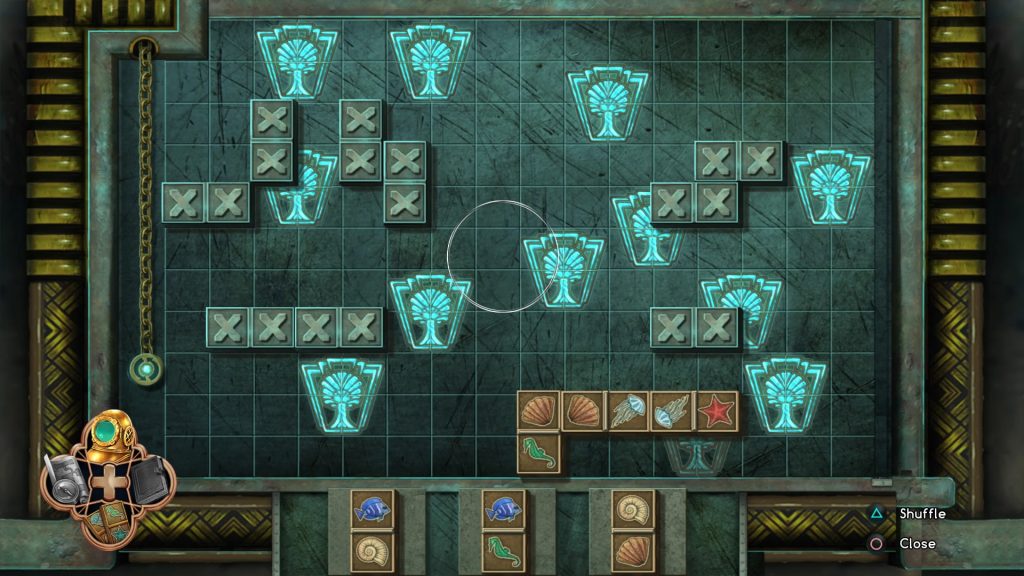 As with all of these kind of games the story is the star, and very much what will drive you forward. In Abyss: The Wraiths of Eden you play as someone searching after their partner who has gone missing following a deep sea diving expedition.  When you get down to his last known location you discover some spooky wraith type creatures and the hidden underwater city of Eden which has fallen into disrepair. What follows is a hunt through Eden trying to locate your partner and avoiding the mysterious wraiths which seem able to possess the inhabitants and appear to be the root of the current state of Eden. This reminded me so much of Bioshock right down to the fact Eden looks to have been modelled on a similar kind of Art Deco come steam punk vibe. As far as settings go it was really evocative and thoroughly enjoyable.

In keeping with many of their other games the voice acting and cutscenes aren’t great and the talking head sections in particular are of a fairly poor standard. I also experienced difficulties with the map in this game as I wasn’t able to fast travel between locations as I could in other Artifex Mundi titles. This lack of fast travel is only a minor quibble but did result in lots of backtracking which was annoying. 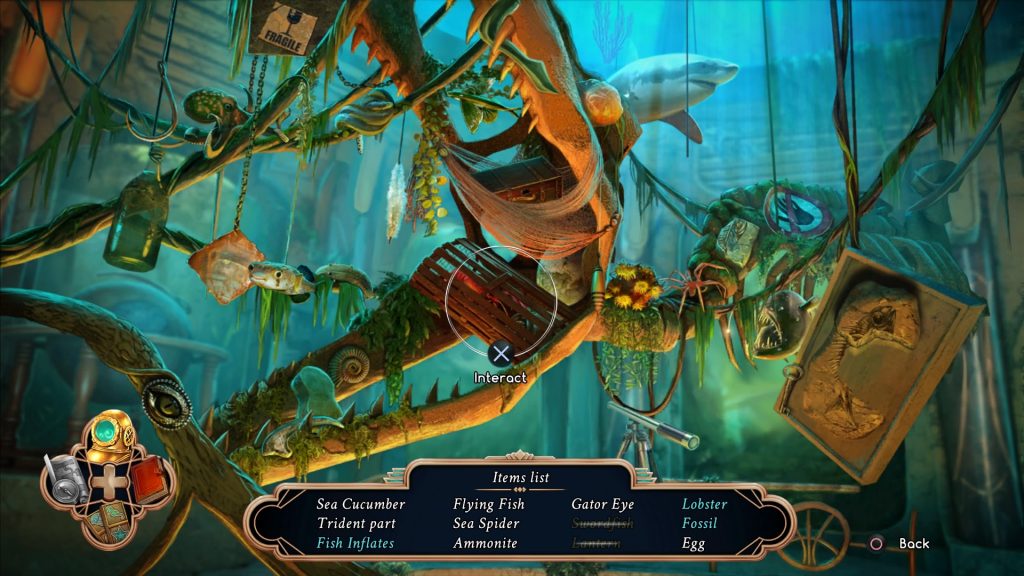 Abyss: The Wraiths of Eden isn’t going to change opinions about these kind of hidden object games, and in many ways this doesn’t matter. These kind of light puzzle story lead exploration games are firmly made for the already established fan base and these are the kind of people who will welcome a new addition.  The spooky story is perfectly geared to a release at this time of the year and the puzzles and minigames are all competently showcased.  Whilst it isn’t the best hidden object game I’ve played, it is another perfectly fine example and one which will please fans.

Abyss: The Wraiths of Eden
7 Overall
Pros
+ Enjoyably spooky detective story
+ Nice alternative minigame of dominoes
+ Extra scenario after main game has been completed
Cons
- Lack of map fast travel is frustrating
- An over reliance on the same hidden object scenes
- Acting and cutscenes are of a low standard
Summary
Abyss: The Wraiths of Eden isn’t going to change opinions about these kind of hidden object games, and in many ways this doesn’t matter. Aimed squarely at fans of the genre this game tells a decent spooky story. Whilst it isn’t the best hidden object game I’ve played, it is another perfectly fine example and one which will please fans.